10 ways to prepare your kids for road trips

Fatherhood changes a man, but that shouldn't make you enjoy driving less
by Andy Leuterio | Jul 29, 2013 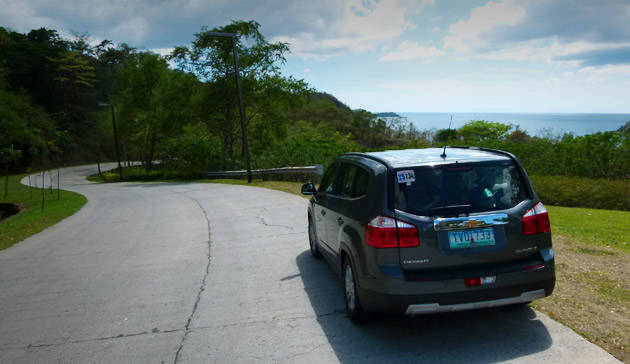 I still remember that fateful night a few years ago. It was a text from wifey: "Are you home yet? We have to talk." Uh-oh. When she showed me the piece of paper--a black-and-white picture of a little dot floating in her womb plus some medical-speak confirming that, yes, my world as I knew it then was about to end--I put on a brave face and wept tears. Of joy? Shock? Disbelief? Who knew? I believe I passed out for a while, too.

Yes, gentlemen, fatherhood changes a man. If you're still single and not having to worry about tuition fees and vaccine shots, enjoy it while you can. I know I did. If, however, you're in the same boat as I am and wondering what the hell happened to ruin what was supposed to be a lifelong party of late nights out, carefree spending and fearless driving, let me share with you one happy revelation: My life actually got a lot better. Seriously.

There's nothing like the responsibility of parenthood to take one's career seriously, to value every precious hour (sleeping or otherwise), and because this is a car enthusiast's site, to enjoy a car even more. If you don't have kids, it's easy to diss those "useless" backseats in that Toyota 86. Well, guess what: I actually like them a lot. Because at four years old, our son already has a healthy appreciation of cars, and those tiny seats are precisely what he needs to enjoy a sports car along with his mom and dad. When you have kids, trunk space becomes a real commodity. Singles need only pack a gym bag for an overnighter. Small families need as much space as they can get for the suitcases, the beach toys, the cooler, the stroller--I even have a mental checklist of the things.

Finally, when we first drove our li'l bundle home at the insanely fast speed of 80kph on the Skyway, I was nearly overwhelmed by the depressing thought that my fast driving days were over. I began to see every PUV as a clear and present danger, and every stoplight as a welcome relief. It seemed like we couldn't go slow enough to keep away from danger. The thought of a freak unintended acceleration was too much to bear. I got "postpartum driving depression" pretty bad.

Obviously, I got over that. These days, I'm enjoying a car as much as I used to, if not more so. Being a triathlete with an 11-month-long season means being on the road at least two weekends every month. Since I race a lot better when my family's around, I bring them with me whenever I can; they're my own personal support crew. That translates to around six hours of round-trip driving time every weekend, most of it an enjoyable (not stupid) pace. If the road is clear, we'll even go up the hills fast enough to feel the g's and get some giggles out of the kiddo. There's nothing like hearing your son egg you on with, "Faster! Faster!" At some point, of course, the wife's icy stare will clear the red mist from my eyes. It's still a lot better than getting passed by student drivers.

If you're a parent just like me and are wondering how to get your driving mojo back, let me share with you some things I've learned along the way.

1.  Car appreciation is a precursor. Kids have to like cars in the first place so they'll look forward to spending a few hours in one. Early on, we got our son Max a couple of Tomy cars to play with instead of the usual robots and stuffed toys. So now his favorite toys are his cars, and it's a treat for him to get in a real car.

2. Safety first--no ifs, no buts. That means kids have to use their own car seat, properly belted in. Use the child locks for the doors, and disable their windows so no one suddenly opens a door or window at speed. I particularly like how some SUVs and minivans have that extra cabin mirror so you can see what's going on in the back. All cars should have those.

I'm stumped how some parents let their toddlers ride on their laps or just roll around in the backseat. The usual explanation is that the child is uncomfortable or puts up a big fuss. They'll also point out that back in the day (that would be the '80s for us), we didn't use car seats. Well, the roads are a lot more dangerous now, and a proper car seat for kids is the best protection they'll have in an accident.

When we first introduced our son to his car seat, we pointed out that both mommy and daddy use their seatbelts, and so should he. Now, it's a good habit--he won't let us get moving until we're all belted in. And because he's in his own sporty little car seat, we have the confidence to go just a little bit faster than the usual road-tripping family. 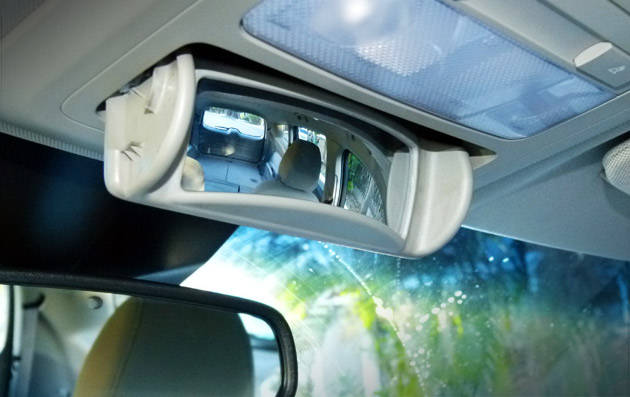 3. Start with the shorter trips. If he's just learning to get used to being strapped in a car seat, get him used to short trips to the grocery, the in-laws, and the trips that take an hour or two at most. You definitely don't want his first strapped-in ride to be a six-hour road trip.

4. Entertainment is all mental. I remember on one trip we took, Max had me play a CD of nursery rhymes again and again for four hours. Tell me, how does one keep his sanity singing the alphabet song again and again? So, I resolved to fix the problem by remembering that kids' brains are like sponges--they'll soak up everything they come in contact with. For one week, I drove my kid to nursery school and back playing just one album the whole time. One day, when I kept the stereo off, my kid said, "Daddy, please play the 'Thunderstruck' song." And just like that, my son is now an AC/DC fan like his old man. Of course, this may also mean listening to what my dear old granny called "Satan's music" for hours on end on the next road trip.

5. Prepare like you're going to war. Everyone in the family has at least one bag pre-packed with all the essentials for a weekend out: toiletries, coffee, powdered milk, vitamins, and at least one change of clothes. The night before the trip, we'll pack a few more bags. The morning of the trip, every piece of luggage has a specific spot in the trunk for optimal weight distribution and ease of access. The backseat has a collapsible box loaded with snacks and extra milk bottles. Loading up used to take an hour. Now it takes around 15 minutes, tops. 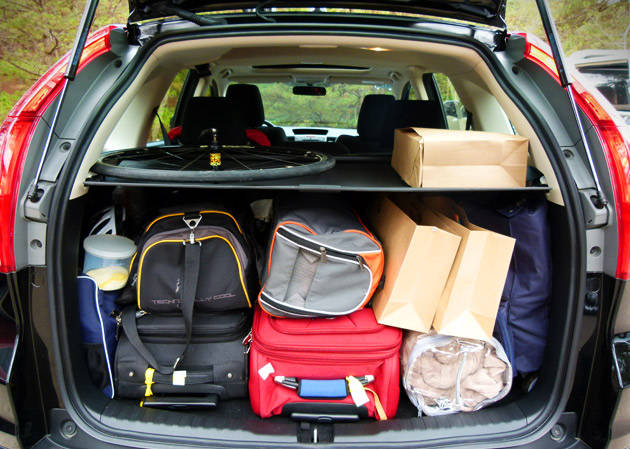 6. Psych the kid up before the trip. On normal days, our son sleeps like a log. When a road trip is happening the next day, we'll tell him all about it so he's in bed by 9pm and up at 6am. Some days, he has even been awake ahead of us at 4am.

7. Time his nutrition. It's important to plan out what and when to feed your kids. If the next hour will put us through some dizzying roads, we'll hold off on his food until after. If the road is mostly straight and boring, then it's just right for a bottle of milk. What do they put in those things anyway? Cough syrup? Sedatives? After one bottle, our kid is out like a light for the next hour or so.

8. Give him a sense of ownership. Rather than just being a mere passenger (which your child actually is), make your kid understand that he's a vital part of the team (which, of course, he is). When he's strapped in his seat, the seat becomes his personal space. I almost imagine our kid has an invisible bubble around him extending from the footwell all the way to the headliner. This way, he gets a sense that he's in control of the situation and not a helpless prisoner of mom, dad and the nanny. (It helps if your child is obsessive-compulsive like ours.)

9. Explain what's happening around him. Like I said, kids are sponges. If uncertainty is nerve-wracking for control-freak adults, imagine how much worse it is for kids driving through strange roads. Too much unexplained phenomena and soon you'll have a crying, screaming, stressed-out ruckus in the backseat. Be patient and explain to him the concept of stoplights and why chickens like to stay in the middle of the road--things like that. Never say, "I don't know." When in doubt, make things up. Because if you're not in control of your car, then who is?

10. Lay down the LAW. You're the driver. Every passenger's life is in your hands, so you need to be in complete control of your vehicle. Screaming, yapping and whining voices aren't just nerve-wracking, they're an unnecessary distraction that can steal your attention from the road. As much as you'd like to indulge your kids, put a reasonable limit to how much they can get away with.

After a few tantrums and crying fits, we quickly learned that the best way to keep the peace and maintain our sanity was to train our kid to speak (not yell), to have all his toys and books with him so we wouldn't have to root around the car for it, and to relay his potty needs well in advance so we could plot our stops accordingly.

The end result is that road trips are things we genuinely look forward to. Hey, you know you've got it made when a four-year-old volunteers to wash the car for you so you can get going already. Not that the wife approves, of course. 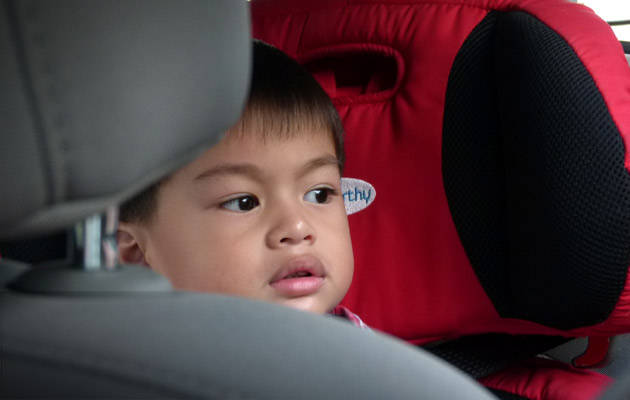 Turbo: Catch this snail while you can
View other articles about:
Recommended Videos
Read the Story →
This article originally appeared on Topgear.com. Minor edits have been made by the TopGear.com.ph editors.
Share:
Retake this Poll
Quiz Results
Share:
Take this Quiz Again
TGP Rating:
/20