The power to shock and awe

A little firepower is good, a lot is so much better
by Andy Leuterio | Dec 17, 2012
CAR BRANDS IN THIS ARTICLE 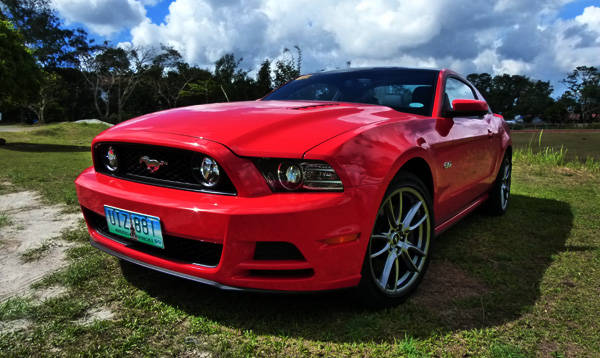 It's been said that during World War II, the Brits remarked of American troops stationed on their land that "the Americans are overpaid, oversexed and over here."

Well, it's nearly the end of 2012. We're not British, this isn't the Queen's country, but the Americans are definitely here. Chevrolet has the Camaro, and Ford has the Mustang. Both are iconic muscle cars that have seen their styling and performance ups-and-downs through the years. This might be a Renaissance age for the type, with both echoing the visceral appeal of their 1970s, pre-Oil Crisis vintage.

I've yet to drive the Camaro, but recently had the chance to strap on a Mustang and try to understand one thing: Why is it so revered for something so large yet so cramped inside and so predisposed to burning off your fuel money like there's no tomorrow? This is the 2010s, right? Fuel efficiency and practicality are the "in" things now, if one were to ask the people at Honda or Toyota--or even Ford itself, whenever the American car company touts the benefits of their mighty mite "EcoBoost" engine line. Yet the Mustang attracted the Instagram crowd every time it sat still. The car may be fairly common in the United States, but at least here in Metro Manila it has undeniable rock-star appeal.

Fortunately, the answer can be deduced from watching the History Channel every time the topic is about war and the American approach to winning: A little firepower is good, a lot is so much better. It's how they won Desert Storm and ended Saddam Hussein's reign, and how they're still the alpha dog superpower today. Hell, even the Mustang's namesake was a fighter plane, the P-51 that outclassed anything else from the German and Japanese war factories (there are still quite a few flying today; I'd love to see them in the metal). See the automotive analogies?

So perhaps it's pointless to dwell on the car's eccentricities--cramped cockpit with one of the most confusing center stacks on the planet compounded by Ford Sync technology, a glass roof that looks good in pictures but has a tendency to roast the cockpit during noontime and a jukebox-themed IP that places the speedometer on the left of the tach, among others.

See, everything is put back in its rightful place the moment you fire up the engine. All five liters, 32 valves and eight cylinders of American muscle, rated at 420hp. If you woke up on the wrong side of the bed and are having a bad hair day or dealing with the sniffles or some other "God, please let this crappy day end now," turning the ignition is bound to cheer you up by a factor of 10.

Nearly all "normal" four-bangers start up with a discreet whine followed by a quiet hum as the pistons start to wake up. Six cylinders have a slightly mellower tone. V8s have a hearty thrum, but a 5.0? It's like waking up a troll, and I'm not talking about the Internet kind. It's the big and ugly kind. It's the sort of rude, flatulent "GRAWWR!" that sent our neighborhood security into red-alert status and nearly short-circuited one passing senior citizen's pacemaker. I thought I'd have some explaining to do as they walked up to me on the curb, but all they wanted was a picture with the car. Then they cheered as I obliged their special request for a brief burnout.

As I idled outside the house, waiting for my dear wifey to get her things in order, I noticed an alarming increase in fuel consumption. "Hurry up before the tank goes empty!" I yelled. Except she couldn't hear me from inside the house; the motor idled like a grizzly bear trapped in a washing machine.

And then the time came to open her up (the car, not my wife), a pretty rare thing if you're talking about Metro Manila roads. I turned off the traction control, checked that the road was clear, applied a little brake torque and let it rip. Hell, yeah.

Zero to 60mph was ours in 5.2 seconds, as documented by the handy "Track Apps" timer/accelerometer thing in the instrument panel. More important were the sound and the sensation, a vicious, obscenely guttural roar accompanied by the hand of God pushing us back in the seats. It reminds me of one of the rules someone told me about fighting; never bring a knife if you can bring a gun. That V8 is a pretty big one, damn sure.

By the way, we are talking about a stock GT here. Ford makes a limited-edition Shelby GT500 with 662hp and a track optimized package, and it's common practice at least in the US to mod the car for all manner of power and chassis upgrades. Call it the Nuclear Option for Mustang-philes.

It's cruel and inhuman punishment to subject a Mustang to stop-and-go traffic. The torque converter struggles to restrain the engine, the corners of the car are hard to see, and the fuel gauge has no qualms about dipping down as quick as a sandclock. Gas station attendants just loved taking my money.

On the open road, the V8 just sends you hurtling along the highway at a manic pace, engine roaring like a rock-and-roll orchestra. Acceleration is strong all throughout the tach that you kind of forget (but not forgive) the fact that this PH-spec car is an automatic. Still, just bury the go-pedal, and the powertrain does the rest. On a steep hill route, characterized by about a dozen switchbacks, turning off the traction control allows you to enjoy the perks of a muscle car: power-on oversteer. Turn in, rotate the tail, unwind the steering, power up the road, repeat. I haven't steered a car by looking through the side windows in a long time, nor one that's actually longer than a minivan.

By the end of the test drive, I'd racked up nearly 600km, burned through 90L of fuel (!) and come to an understanding of why traditional muscle cars are still hot items. I alternately felt like the driver of a bank robbery gang in a Hollywood movie--someone who had successfully preempted midlife crisis by a few years and the patron of the road in that "big fish, small pool" kind of way that made me drive more like a good citizen in the city than I ever do with a "normal" car. I mustn't give people another reason to hate the "Rich Bastard" in the sports car, you know.

At nearly P3 million for the GT and especially in "Arrest Me Red" paint job, it's not a relative bargain like the 86/BRZ duo or the value-for-money package of a Genesis Coupe. But it's still the cheapest ticket into the 400hp-plus club. A muscle car like the Mustang will always be brash and loud, and generally not the sharpest tool in one's arsenal, but it sure is a lot of fun.

A Top Gear PH reader asks: What\'s a good and fast SUV?
View other articles about:
Read the Story →
This article originally appeared on Topgear.com. Minor edits have been made by the TopGear.com.ph editors.
Share:
Retake this Poll
Quiz Results
Share:
Take this Quiz Again
TGP Rating:
/20