If an illegally parked car incurs damage, who is liable?

As a general rule, the owner or source of the falling inanimate object is liable for the damage caused to a parked car, whether legally or illegally parked.

You need to first determine the real fact in issue. The issue isn’t the compliance with parking regulations. The real issue is whether the owner or source of the falling inanimate object is liable for damage caused by the falling object coming from his property.

The Civil Code of the Philippines has specific rules of liability for different kinds of falling objects. The head of a family that lives in a building is responsible for damages caused by things thrown or falling from the building (Article 2193, Civil Code). This liability for falling objects is based on the head of the family having control over the building, and not based on ownership of the structure.

The owner of the home or building is responsible for damages caused by objects (for example, roofing, decor, windows, lights, or other parts of the structure) that get dislodged from the premises. This liability for falling objects is based on the ownership of the premises, and not based on control of the property.

The owner of the home or building is responsible for damages caused by its total or partial collapse, if it should be due to the lack of necessary repairs. Moreover, if a building, wall, column, or any other construction is in danger of falling, the owner shall be obliged to demolish it or to execute the necessary work in order to prevent it from falling.

The owner of a tree is responsible for damages caused by the falling of trees, including branches and coconuts, situated at or near highways or lanes, if not caused by force majeure (Article 2191, Civil Code). The owner of the tree is obliged to remove the tree that may fall and may cause damage to the land of another or to travelers over a public or private road (Article 483, Civil Code).

To be exempt from liability, it is necessary that the property owner is not negligent or has committed no misconduct in relation to the falling object. For the owner of the premises to not be liable, he must prove that the damage to the illegally parked vehicle was caused by the strong winds of a typhoon or a force majeure.

When the damage is partly the result of a person’s participation—whether by active intervention, neglect or failure to act—the whole occurrence is humanized and removed from the rules applicable to acts of God (Sicam vs. Jorge, G.R. No. 159617, 8 August 2007).

If shown that there is lack of necessary repairs, the owner of the premises is liable for any falling objects from his property even if there was a typhoon.

On the other hand, the driver of the illegally parked car may be issued a traffic ticket for illegal parking with a P1,000 fine as provided in the Department of Transportation and Communications Joint Administrative Order No. 2014-01 (DOTC JAO No. 2014-01). It includes the following parking traffic violations:

2) Within five meters of the intersection

3) Four meters from the driveway entrance

4) Within four meters from a fire hydrant

5) In front of a private driveway

7) At any place where signs of prohibitions have been installed

In the defense of the source or owner of the falling object, he will have to demonstrate that necessary repairs to the premises were made. He will have to prove that despite the exercise of care required, the removal or dislodgment of the roofing or debris could not be avoided due to the strong winds of the typhoon. The driver of the parked car will just have to prove the fact of damage and the circumstances under which it occurred.

The Civil Code provides that whoever by act or omission causes damage to another, there being fault or negligence, is obliged to pay for the damage done. Such fault or negligence, if there is no preexisting contractual relation between the parties, is called a quasi-delict or, in layman’s language, an accident.

In the end, the rights and liabilities of the parties will depend upon the circumstances and the quality of the evidence available. 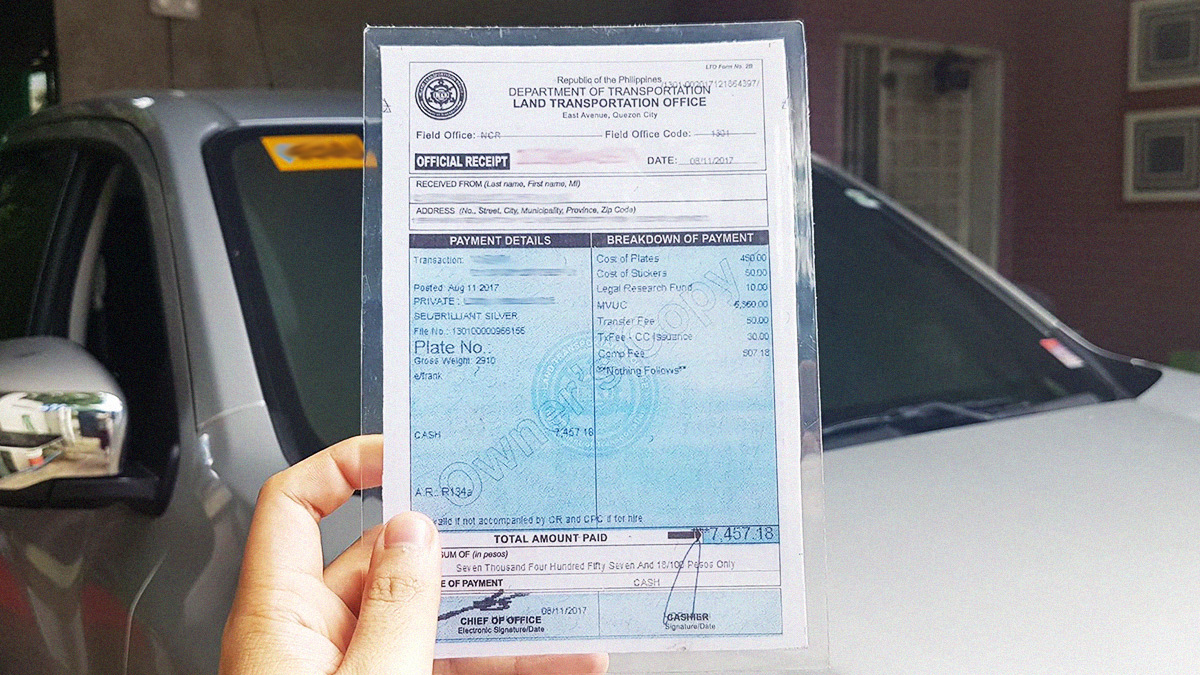 What can I do if I still haven’t received my car’s OR/CR yet?
View other articles about:
Recommended Videos
Read the Story →
This article originally appeared on Topgear.com. Minor edits have been made by the TopGear.com.ph editors.
Share:
Retake this Poll
Quiz Results
Share:
Take this Quiz Again
TGP Rating:
/20