The entrance to our office's basement parking requires me to clear a very tight turn (almost like a hairpin) to get my ticket without denting the left portion of the front bumper. A number of huge SUVs and especially pickups have regularly failed this impromptu "minimum radius" test. Which is always a hassle, because that means I have to do several maneuvers, which in turn means the vehicles behind me have to wait while their occupants watch me display my turning skills.

So when the new Mitsubishi Strada GLX was offered to me, I half-expected to labor at my dreaded hairpin every morning. Because while the Strada looks deceivingly short, it is actually longer-at 5,090 (GLS) and 5,040 (GLX) millimeters-than the Isuzu D-Max (4,995mm), for instance.

But what do you know? On my first attempt to clear that parking-entrance turn, the Strada was through. No need to rock back and forth. And certainly no need to amuse, or bore, the drivers behind me. What we have here, clearly, is a pickup with a turning radius so small (5.9 meters, to be exact), it won't feel awkward inside drive-thru lanes or motel garages.

In other words, an urbanized pickup truck.

But this shouldn't be a surprise at all. The Strada's styling alone has the word U-R-B-A-N spray-painted all over it. It's pretty...what else can you say? In a metrosexual kind of way, actually. It pains me to imagine it tackling a rough terrain or wading through water. It's like imagining Borgy Manotoc furiously hauling rocks in a quarry.

OK, so maybe the analogy is a bit off...mainly because a pickup doesn't kiss and tell. My only point is that the Strada may be too pretty to be taken seriously by the pickup market. Even the cargo bed, which tapers off from the mid-section to the rear of the vehicle, appears too stylish and small for serious utility.

And so these things conspire to give the Strada a rather soft image. Slightly lost on many people is the fact that the entire Strada line (GLS manual, GLS automatic and GLX manual) introduced by Mitsubishi Motors Philippines is exclusively four-wheel-drive. There is not a single 2WD variant currently available even if the majority of those who will buy this pickup won't leave the pavement.

Underneath the pretty face, therefore, is Mitsubishi's Dakar Rally-honed four-wheel drive system, which offers shift-on-the-fly convenience even up to 100kph.

So in reality, the new Strada is like Brad Pitt's character in Fight Club: gorgeous but lethal. It won't have qualms about engaging in a face-smashing exercise just for the heck of it.

Unlike Pitt's celluloid alter ego, however, the muscle of the locally available Strada is somewhat underwhelming, especially since the other pickup (Ford's Ranger) that was introduced to the Philippine market around the same time has a 154hp, 380Nm 3.0-liter diesel engine on top of its rather pedestrian 2.5-liter unit. The Strada actually has a 3.2-liter turbo diesel but Mitsubishi has only brought in the more sedate 2.5-liter CRDi diesel power plant with ratings of 134hp and 314Nm (the Ranger's 2.5-liter engine has 141hp and 330Nm).

Then again, the new Strada beats the 2.5-liter spec line of the Toyota Hilux (a very paltry 102hp and an even paltrier 200Nm of torque). Furthermore, if Mitsubishi is convinced that most of the new Strada's buyers are urban city dwellers, why bother with a bigger, more expensive and thirstier diesel engine? If you ask me, the 2.5-liter unit is mighty fine around the metropolis. Just right for those off-the-line sprints along Ayala Avenue or those nifty passes on EDSA.

Another trait that convinces me the Strada is designed for city driving is its very civil ride. It probably has the most agreeable ride in its class. Never leave the paved road and the vehicle itself would suffer from identity crisis: It almost feels like a sedan inside.

Sixteen-inch wheels with 245/70 tires complement the pleasant ride. Upgrade to twenties and car lovers everywhere would flip out. This pickup is just that attractive.

The Strada arrives CBU from Thailand, where it is known as the Triton. In this pickup-loving ASEAN country, the Strada has been available since 2005 but has failed to beat the significantly older Isuzu D-Max. And that, I suspect, is due to its comely appearance and average cargo bed space. I suspect Thais want their pickups tough-looking and even tougher-performing. And that is where the Philippine market is decidedly different. Over here, a good number of SUV and pickup buyers don't really utilize four-wheel drive systems, unless unforeseen circumstances force them to. And even then, many Pinoy motorists would rather just park their vehicles than subject them to horribly uneven terrain.

The Strada's interior is almost impressive with an attractive bluish instrument cluster and a handsome steering wheel. The only thing that spoils this in the GLX is that gaping vacuum right smack in the middle of the dashboard just above the air-conditioning controls. You know that on higher variants or in other markets, this conspicuously empty cube is supposed to be occupied by either a 2-DIN audio system or an LCD display of various information (like ambient temperature, directional bearing, and even tire pressure). As it is, in a third-world country like ours, the cubby-hole becomes a convenient shelf for CDs and whatnot.

Outside, the expansive black-plastic front bumper and chrome grille immediately distinguish the GLX from the higher GLS variant. Perfect for downplaying the Strada's drop-dead gorgeous countenance.

So you want to be both pretty and tough? Check out this truck. 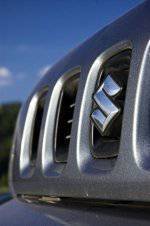 Car review: Suzuki Jimny
View other articles about:
Read the Story →
This article originally appeared on Topgear.com. Minor edits have been made by the TopGear.com.ph editors.
Share:
Retake this Poll
Quiz Results
Share:
Take this Quiz Again
TGP Rating:
/20