When the Mazda MX-5 RF was revealed, I was one of those who was less than enamored with the idea of a Miata with a folding mechanical roof. I thought the MX-5’s canvas roof was a beautiful origami of efficiency and function. Also, in my delusion that I am a driver of considerable talent, I was concerned that adding weight to the Miata’s roof would affect the wonderful balance I’ve experienced both on the road and on the track.

So what did I do when a test drive of the top-spec MX-RF Club Edition was pitched in one of our internal chat groups? I raised my hand virtually to stake my claim. This may not be the Miata I’ve always dreamed of, but I certainly wanted to find out why not. And one thing I learned in my line of work is that you never refuse a roadster test drive. 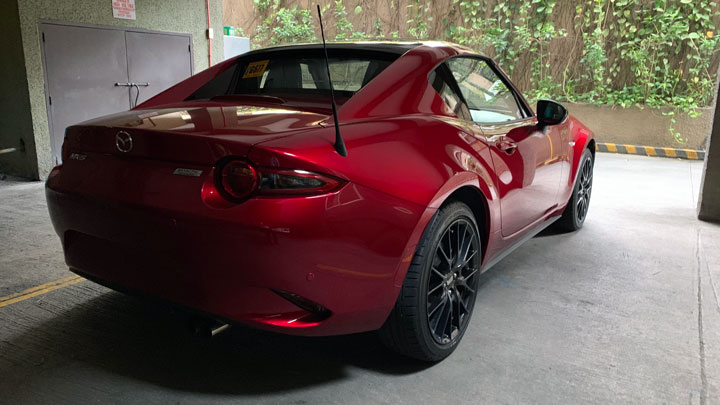 I have the key and I’m walking down to our office basement to see the car for the first time. I’m a bit apprehensive about the color. I think Soul Red is a lovely hue. But when all the Mazda demo cars are Soul Red, it gets a bit monotonous. And it’s a shame because I’ve seen other good Mazda colors like Machine Gray and, of course, Ceramic White.

I see the car parked, and—oh no, it’s another shade of...oh wow. Soul Red may be so 2013, but Soul Red Crystal is mesmerizing. It’s deeper and somehow sparklier at the same time.

As for the car’s overall look, it’s a home run. Security guards stare at it, tricycle drivers gawk, and you will look at it longingly every time you get in and out. The rakish face remains the same, but the solid roof was penned to flow smoothly from the front, leading to the elegant buttresses behind the seats. Being a fan of the soft-top, I hate to admit this, but the solid roof caps the Miata perfectly—in both form and function.

The main draw of the Club Edition are the BBS wheels and the Recaro seats. The clean design of the black BBS rims complement the deep red color. Basically, the wheels are *heart emoji*. They’re a classic 16-spoke design with just a hint of retro. Fold the top down to expose the dark gray Recaros, and it’ll send a tingle up your spine. The seat materials are a mix of leather and suede, with the Recaro logo in the middle. 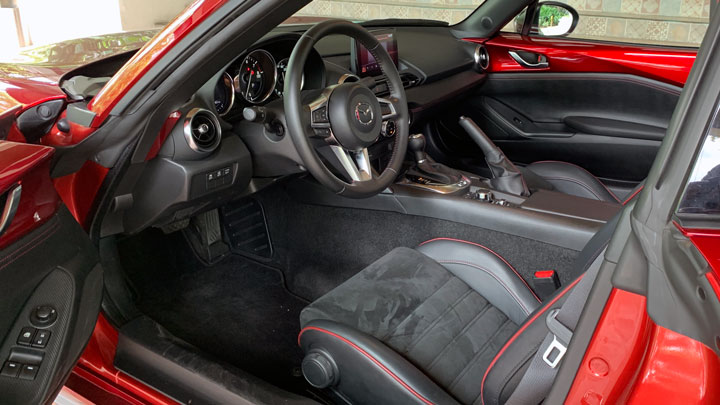 For such a small car, the MX-5’s doors open quite wide. But for someone of my size, getting in and out is a minor workout. Once I’m inside, I have the sad realization that racing Recaros are unforgiving toward oversized drivers. Ideally, they would hug your frame the way the roadster hugs the road. In my case, they just squeezed hard. My body adjusted after a time (along with my internal organs, I think), but future owners looking at this Club Edition might want to check their BMI first.

The cabin is basically the same as the rest of the MX-5 lineup—except for the base manual soft-top, which gets fabric seats and a more basic audio system. The Recaro seats are the only differentiator. Storage space is still very limited, and the only cupholders available are behind your armpits—but you already know this. With the solid roof, the interior is noticeably more quiet than the soft top, making the RF a better city car. You’ll be better insulated against the noise pollution that permeates the metro.

Mazdas have always been ergonomically sound. In a cabin as small as the MX-5’s, everything is within easy reach. One niggle is I want the steering-wheel buttons to have firmer feedback; they’re too soft and mushy. And at a time when carmakers are starting to adopt CarPlay/Android Auto, Mazda’s MZD Connect system is beginning to show its age. It still connects easily to my iPhone, and the Bose audio system is superb.There’s nothing wrong with it—it just feels a little dated. Now you can add CarPlay functionality, too, for an additional fee. 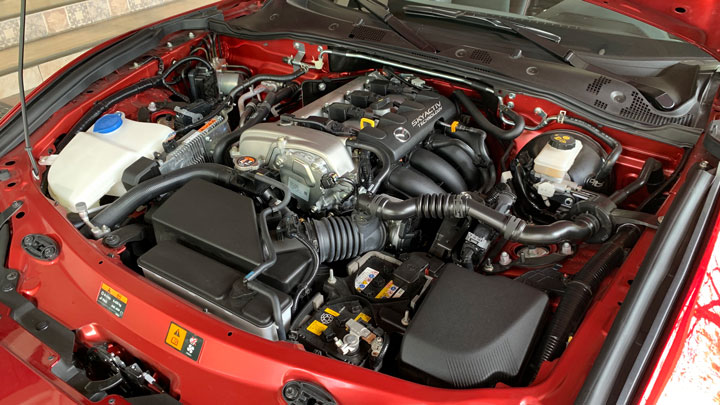 When I first drove the ND Miata three years ago, it was all about balance and driving feel, not outright performance. But it never felt slow. The 2018 power upgrade alters that dynamic, making the MX-5 more exciting even just going down Ortigas Avenue at night. Power has increased by 23hp to 181hp, along with a 7Nm torque bump to 205Nm. The Miata can make even 70kph feel exhilarating, and this 2019 update amplifies that characteristic even more.

I had it in Sport mode about 70% of the time, and it still gave back 10.2km/L. I never drove it timidly. Power arrives around 2,800rpm, and it wails gloriously to the 7,000rpm redline from there, pushing my fat back against the tight Recaros. Mazda has said that the engine sound has been tuned; I believe them. 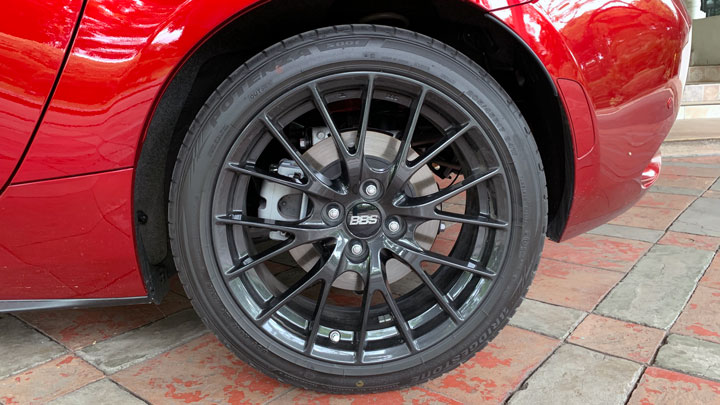 In the MX-5, you sit so low that you become the center of gravity. You unconsciously lean as the car turns. The Soul Red Crystal color ‘seeps’ into the cabin thanks to the color-matched door material, reinforcing the theme that, cliché as it seems, you feel at one with the car. The car is so beautifully balanced. Even when you start to slide in corners, the MX-5 communicates what’s happening, and it becomes part of the joy of driving this agile roadster.

The 17-inchers are not low-profile, and this helps them absorb uneven roads and ruts comfortably. Still, I drove with a mixture of fright and excitement on Manila roads—anxious about hitting potholes, and thrilled with the ‘game’ of dodging them. I don’t know how much these BBS wheels cost, but I’m sure I don’t want to find out.

Even with the top down the noise inside the RF’s cabin is more contained than the soft top’s, not surprisingly. Whereas going roofless on the expressway with the latter felt like you were in a vortex, the former palpably downplays the wind shear. 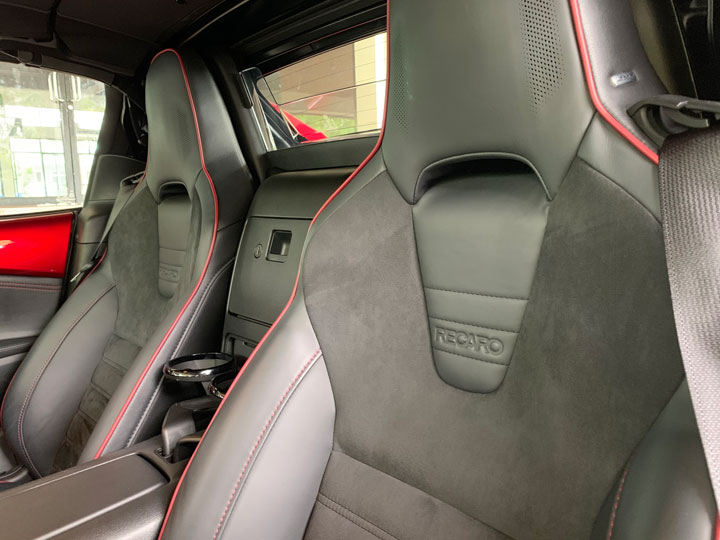 The Bose audio system sounds as pleasing as the consumer stuff. Quite good for most people, but it will have more discerning ears looking for more. Even with the top down the audio was audible, allowing you to enjoy your road trip playlists.

For its price range, the MX-5 is actually quite bare. The windows don’t even go automatically up. But there’s lane-change indicators and automatic everything, so there are still enough creature comforts for most people.

The main draw in the Club Edition are the Recaros and BBS accessories. They really add to the Miata’s character, making it more upscale and gearhead-centric. 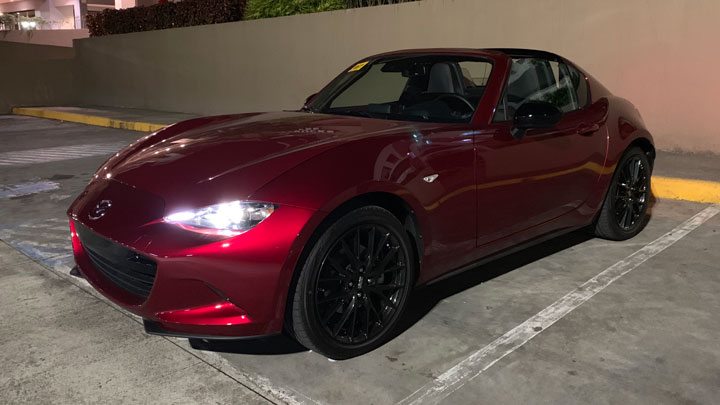 The MX-5 RF Club Edition could be considered the ‘best’ MX-5 in the range. It has the best seats, wheels, and features. But all Miatas have the same engine, suspension, and wheel size. This means their driving character isn’t wildly different from each other. But three quarters of a million pesos separates the Club Edition from the base-spec Miata with a 6-speed manual and fabric seats. What you’re paying for in the former are a mechanical roof, better NVH, and curated accessories.

It’s up to you (or your wife) if the top-spec MX-5 is worth it, but I can tell you that the Club Edition can justify its asking price. Just make sure you comfortably fit inside. Did the power folding roof affect the handling and balance? To be honest, it’s been awhile since I’ve driven the soft top, and I was having too much fun to compare.

In the end, a Miata decision is personal. Like a character said in one of the few brilliant moments of Michael Bay’s dreadful Transformers franchise, “A driver don’t pick the car. The car picks the driver.” 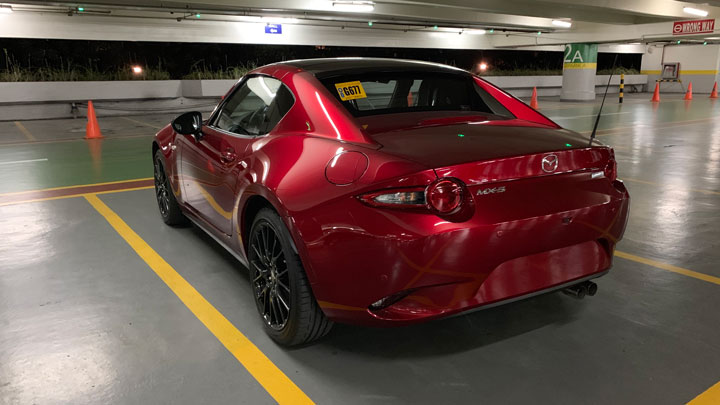 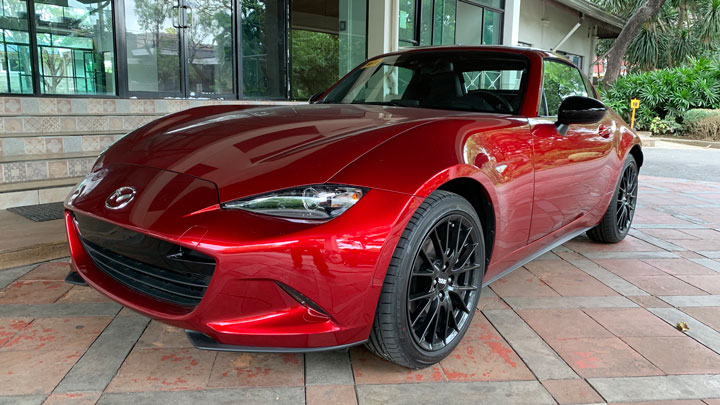 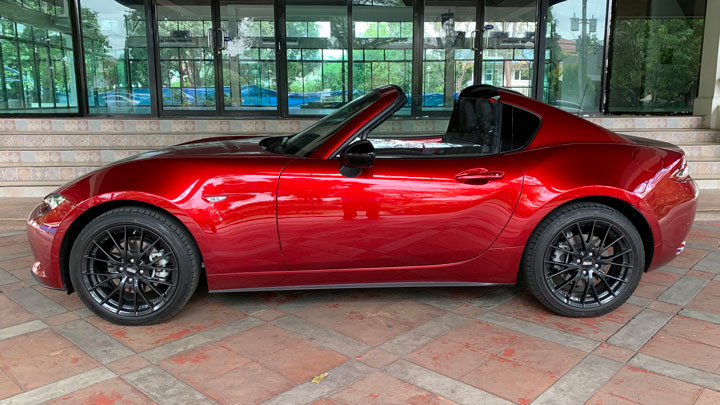 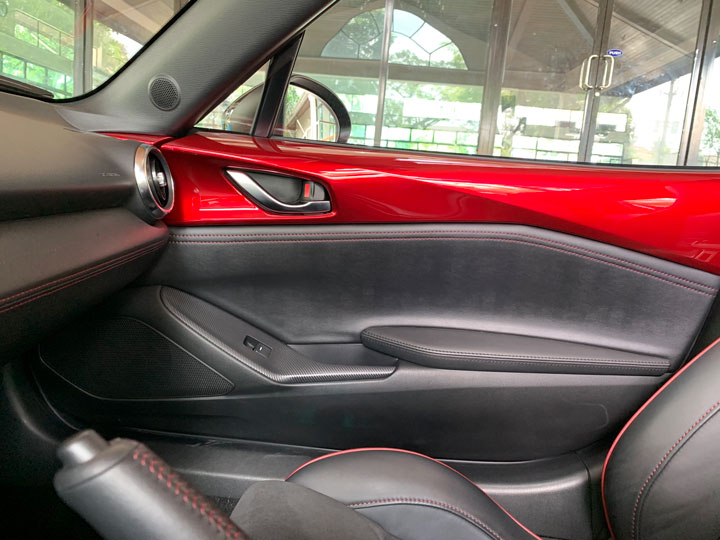 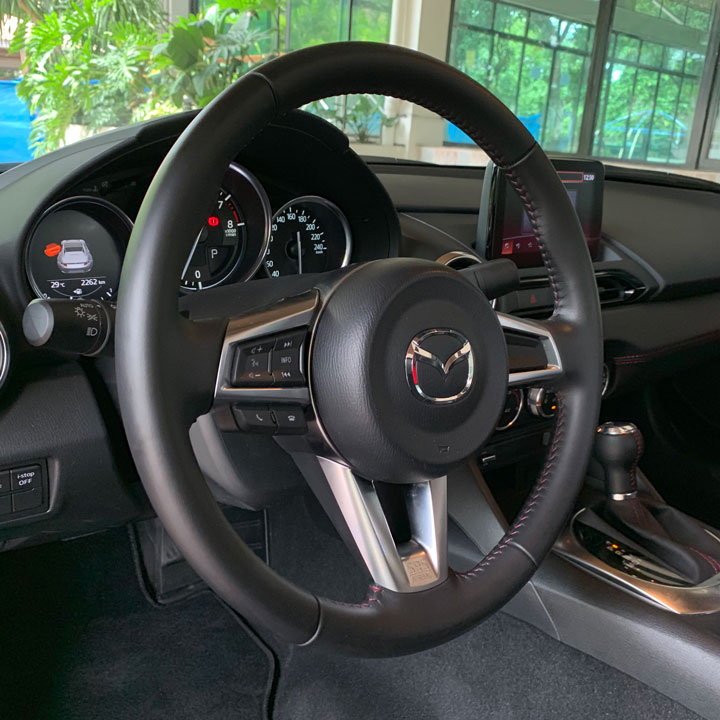 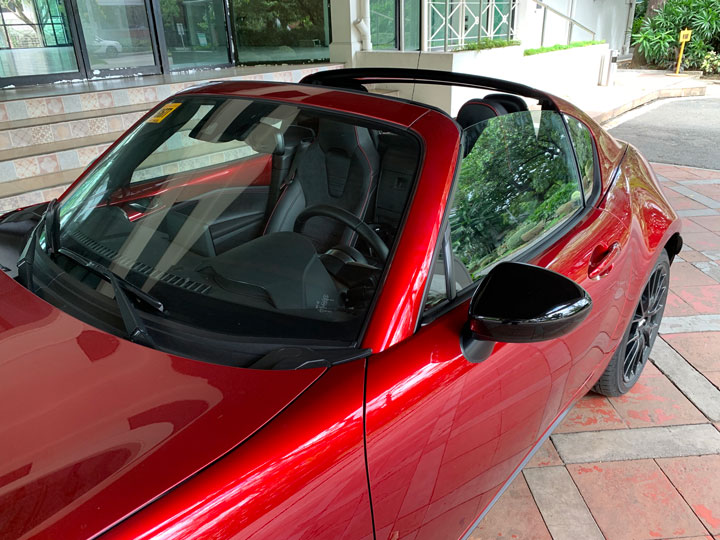 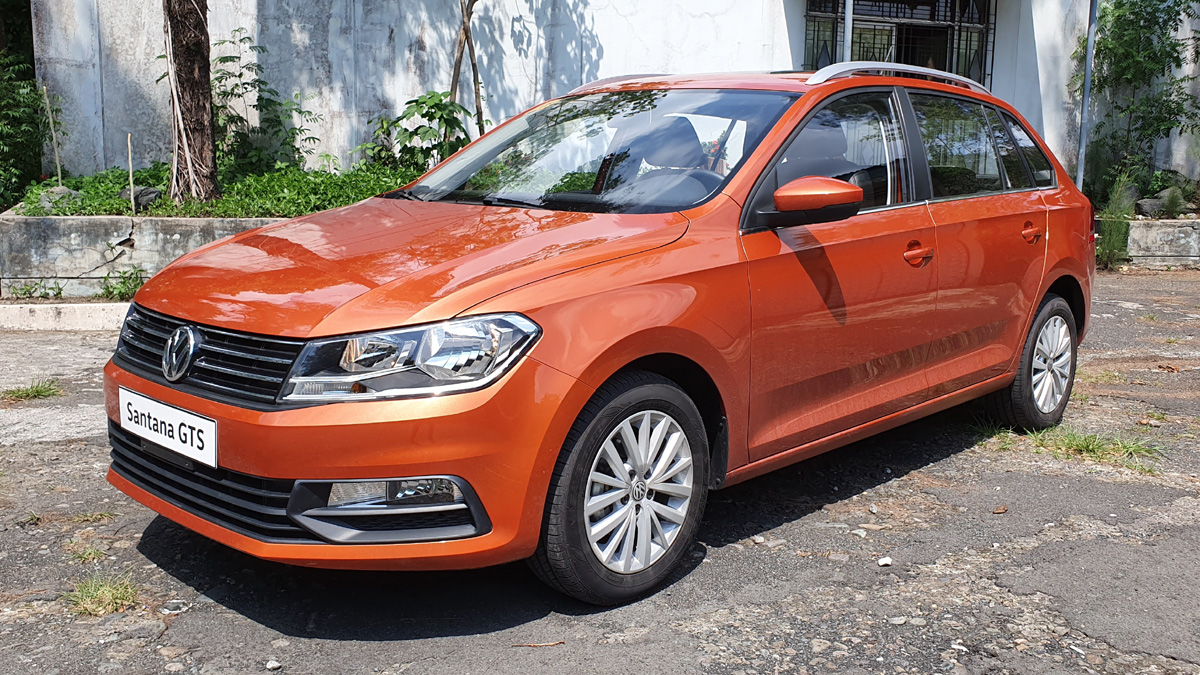