This is how desirable convertibles are done
by Ollie Marriage | Jul 4, 2020
CAR BRANDS IN THIS ARTICLE

This is Ferrari’s heartland car. Trace it back through the years and the mid-engined V8 two seater has a history that stretches back unbroken to the 308 of 1975. Or seeing as this is the Spider roadster, maybe we should cite the 308 GTS of 1977. Either way, that’s pretty much 45 years of history to call on when it comes to creating a new one.

Think the F8 looks similar to the 488 it replaces? That’s not a coincidence. Underneath, they have a lot in common—think of the F8 as more of a facelift than an all-new model. Take another step back and there are also strong commonalities between the 458 that launched in 2009 and the 488 of 2015. This is the reality of making a supercar profitable in the current climate. But Ferrari manages to inject variety across its spectrum. Where McLaren employs the same basic carbon-fiber tub, layout and, engine in all its models, Ferrari mixes things up: V8, V12, front- and mid-mounted engines, 4WD or rear-drive. 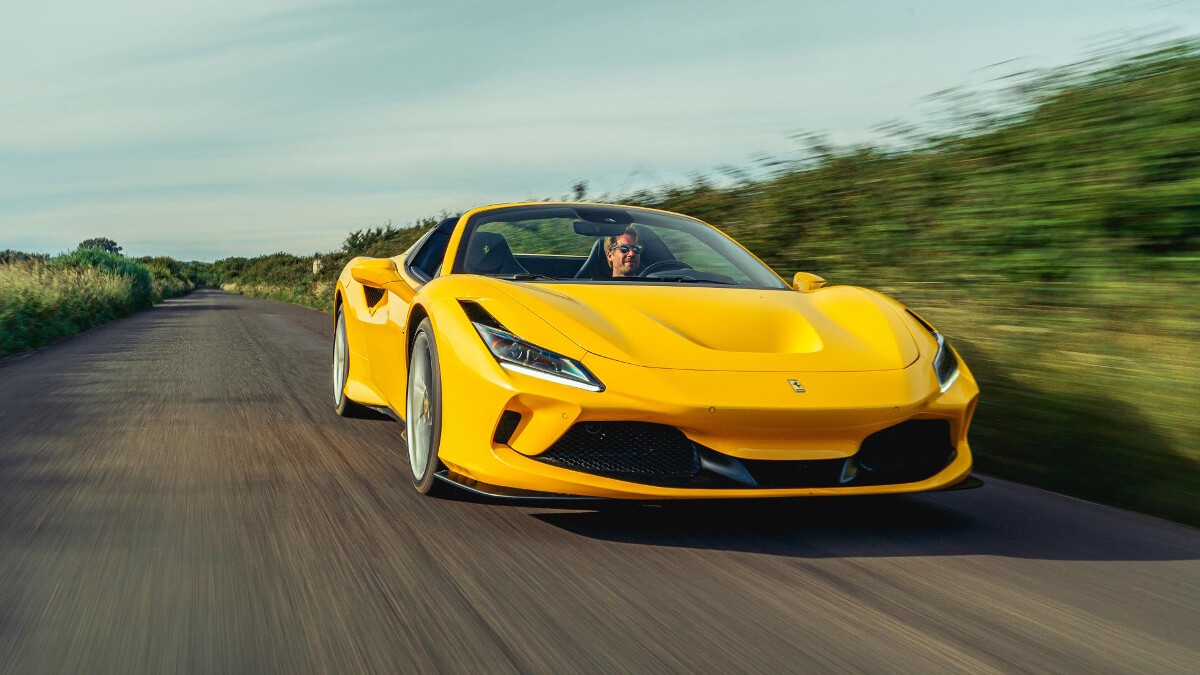 So, no carbon tub for the F8—the 488’s aluminum chassis is carried over. Investment has instead gone into the engine. It’s still a 3.9-liter twin-turbo V8, but it has lost weight (18kg) and gained power (50hp). It’s basically the motor from the outrageous 488 Pista, which means it uses lighter components, including con rods, crankshaft, and flywheel. Inertia is apparently down 17%, if you care about such things as Ferrari does. Helps with the revving, which in turn helps with the acceleration—0-100kph now stands at 2.9sec, with a 340kph maximum. The Inconel exhaust comes from a 488 Challenge race car and saves 9.7kg alone.

Outside, the proportions haven’t changed, but the aerodynamics have. The nose gains a similar S-duct to the Pista and the headlights incorporate brake cooling channels. Altogether, aero efficiency is 10% better. There are no claims about how the coupe differs from the roadster, so instead, let me tell you that the flip-up-and-over hardtop roof mechanism is carried over from the 458/488. The operation takes 14sec to complete, and although at one stage during the procedure, you’re presenting a vertical wall to the airflow, it can be done at up to 45kph.

The rear end returns to a four-light setup and overall the visual nip/tuck has served to freshen the F8. But don’t expect a fundamental jump in performance over the 488. It still uses the same suspension with standard adaptive magnetorheological dampers. Pretty much everything else is optional and very expensive. The price has risen slightly—like power figures, cost only ever goes one way. Ferrari quotes £225,897 (P14.04 million) before options for the Spider, some £20,000 (P1.24 million) more than the coupe. 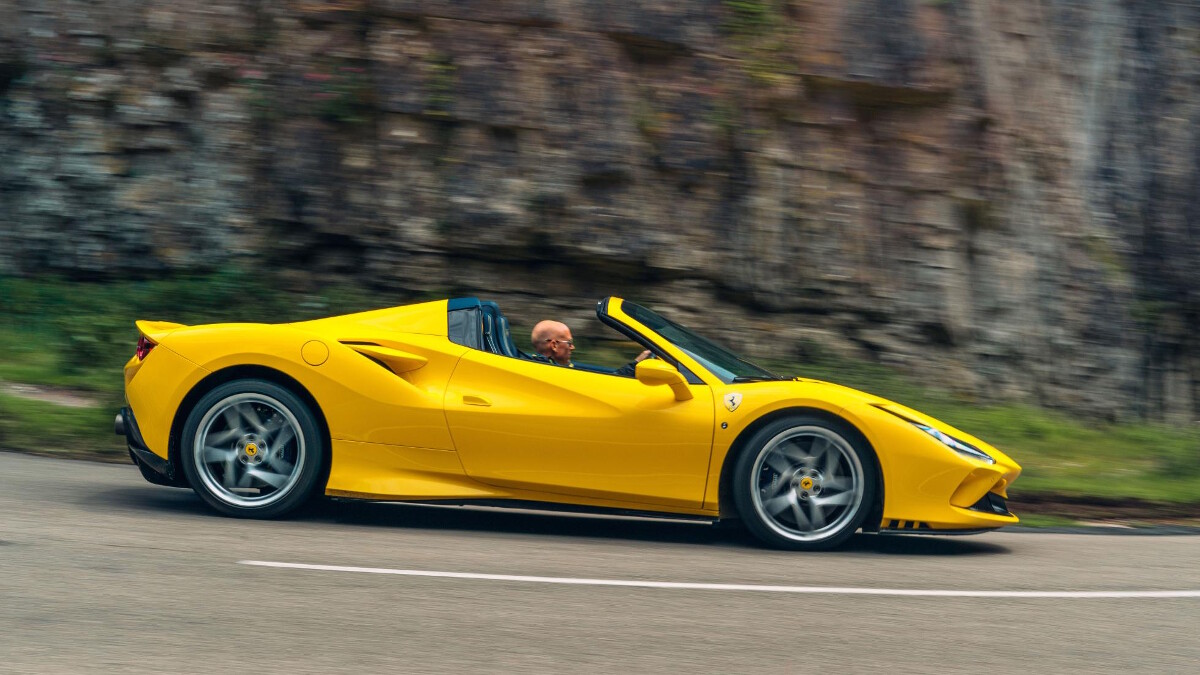 How does Ferrari do it? And perhaps more pertinently, why does no one else do it? Surely, rivals must have stripped this engine down and discovered its secrets? Or perhaps it really is witchcraft. Whatever the truth, there isn’t another turbocharged engine on the planet like this. Nothing that is as responsive and immediate to the throttle. It is, of all the turbocharged engines out there, the only one that can rightly claim to have banished lag.

Others have good response high up the rev ranges where the turbos are already spinning furiously, but the F8, like the 488 before it, responds as promptly and dramatically to the throttle at 2,000rpm as a naturally aspirated car. This means it’s fearsomely fast and is never caught unawares. Even in fifth at 50kph, it kicks hard. This unparalleled drivability is the most important thing about this engine—over and above its power figures or the sound it makes.

It is, of course, bananas fast: 710hp working on a curb weight of around 1,500kg (Ferrari quotes a 1,400kg dry weight for the Spider, and regular curb weights are about 100kg more) has dramatic effects, but over and above the way the F8 responds and pins you back is the torque delivery. Once again Maranello, has engineered it to limit the torque in lower gears, which means that each time the next pops home (which it does with a sneaky clutch surge), the acceleration seems to increase. 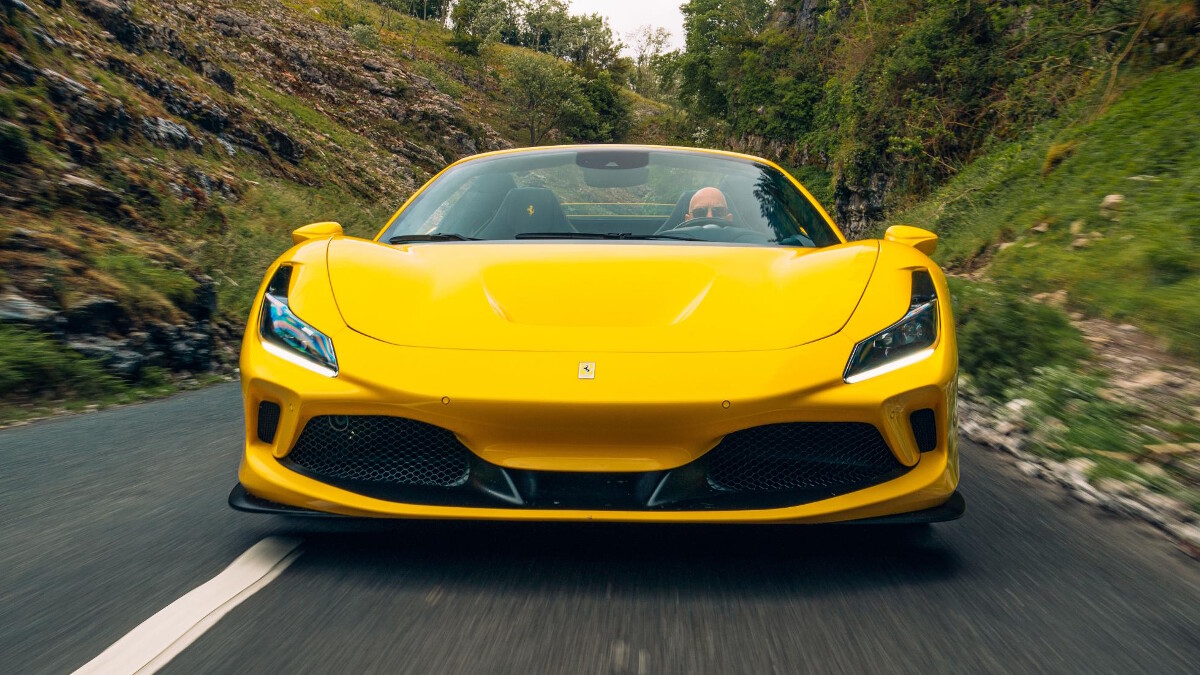 The effect is an utterly relentless headlong rush for speed. There’s no time to breathe, no time you’re not in the flood’s fastest flow. It leaves you breathless and trembling. And often unaware of just how fast you’re traveling. The dominant yellow center dial is given over to revs and gear info, so unless you’ve got the correct display showing in the flanking screen, the speed reading is a footnote next to the remaining range.

But every engine has an Achilles heel. Here, that’s noise. A Ferrari V12 sings and soars, but the twin-turbo V8 drones. It’s just not a very exciting thing to listen to. The volume is about right—you can hear it roof down when you want to, and it lowers to a background hum when you’re coasting along—but the actual tune it plays just isn’t stimulating.

While we’re talking drawbacks, here’s another: The aluminum chassis isn’t rigid enough. Hit a lateral ridge in the F8 Spider and you get a shiver up the car’s spine that makes it as far as the steering wheel. And yet this structural shudder doesn’t disrupt the lines of communication. Normally, shake like this dilutes feedback as the chassis flexes when you load it up through a corner. But here, that doesn’t really happen. The F8 is a responsive, sparkling thing to drive. You always know exactly what’s going on with the steering, and are fed constant information through the suspension. Yes, sometimes those signals are polluted by this small wobble, but they don’t stop the F8 being a complete hoot to drive. 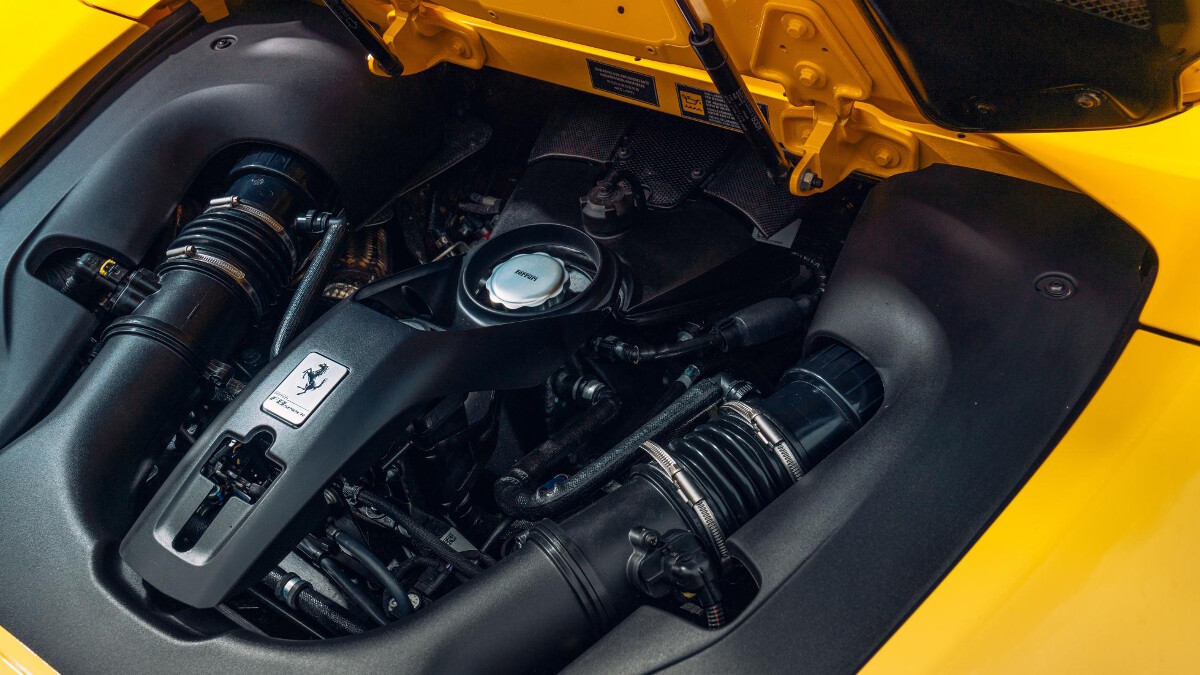 Combine the super-alert engine with a chassis that may not be flawless in its rigidity but wants to show you a good time, and it’s a recipe for fun. It even rides tolerably well.

And that last point is important, because a super-roadster has a different brief to a hardtop supercar. It needs to be able to potter around easily, roof down, just indulging its occupants in the sights, sounds and smells around them. The F8 is good here. In Bumpy Road mode, the suspension is detectably gentler, actually permitting some body roll. The cabin is reasonably well-protected from wind, and the car flows along effortlessly surfing the instant torque.

There are tricks up the F8’s sleeve, the newest among them—and borrowed from the 488 Pista— is FDE+ (Ferrari Dynamic Enhancer), which uses software to manage the brakes through and exiting corners. You don’t have to be anywhere near the pedal; just have the manettino pointing to Race mode or above and the car just gently and individually applies the brakes to improve your line. Can’t say I noticed it working, which probably tells you all you need to know. Just be aware that if you do clog the loud pedal mid-corner, it’ll be the new 6.1 Side Slip Angle Control that saves you, not FDE+. 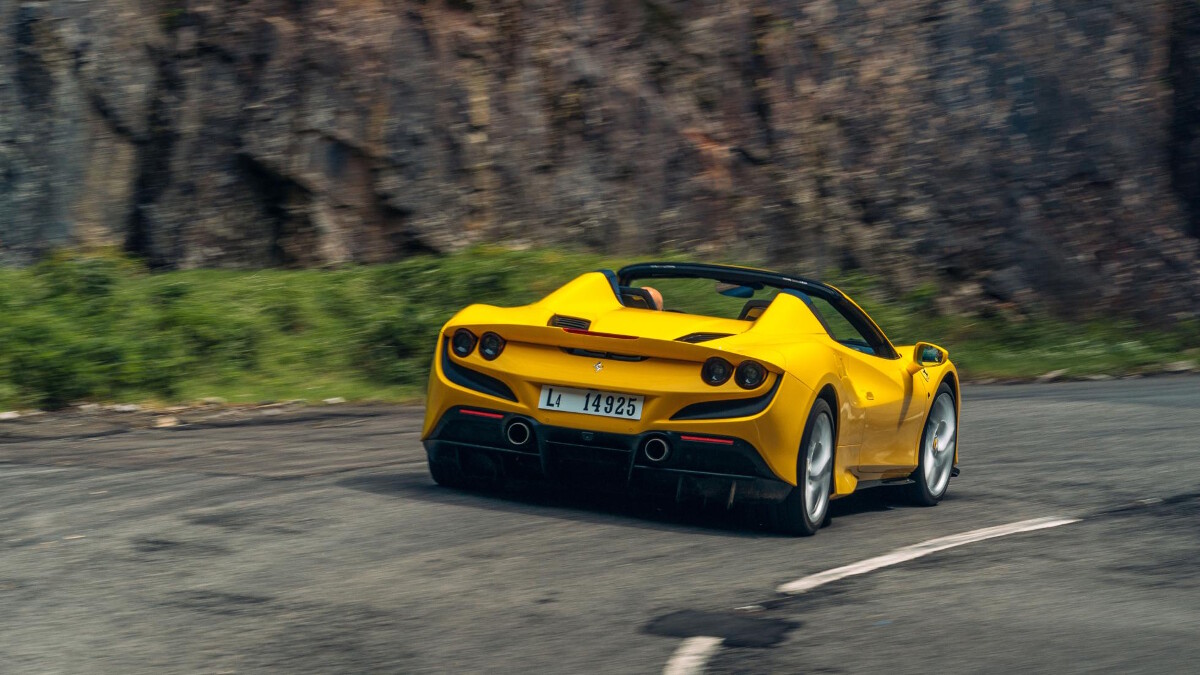 Or, if you’ve elected to switch the traction off, you’ll be praying your responses are as good as the car’s and the brakes understand the urgency of the situation. Since they’re whopping 398mm carbon-ceramic front discs, they will. Overall, it does feel like Ferrari has integrated the components better, so they work together more harmoniously. The steering, which could feel over eager in the 488, seems better mannered here, more in tune with the chassis.

As for fuel consumption, don’t expect feats of economy from that beautifully responsive V8. Ferrari gears it quite short (70 pulls 2,500rpm in seventh), which means that it manages around 10.2km/L on a long haul but down to single digits most of the time. The 78-liter fuel tank usually lasts a little over 480km. 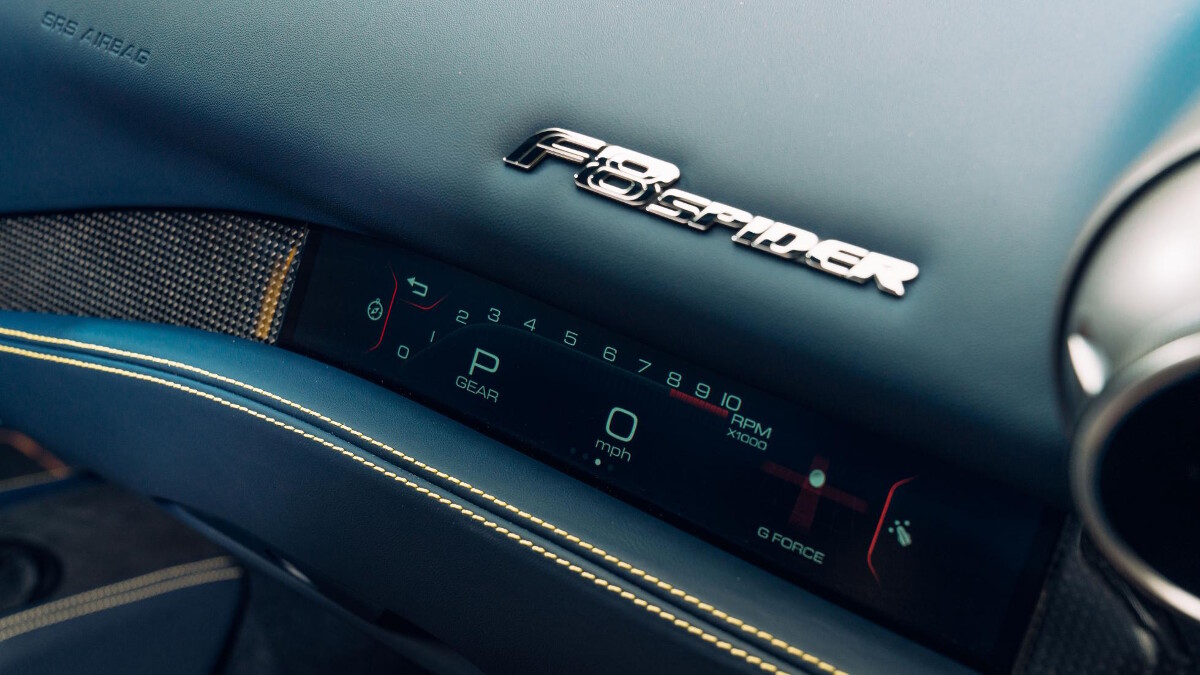 The biggest news from Ferrari inside is that your passenger can now know exactly how fast you’re going. And how much G you’re pulling. Given it’s not easy to see that information on the dash, maybe the Passenger Display is a £2,592 (P161,100) option worth ticking. Or maybe not.

The driver’s view ahead is still dominated, as tradition dictates, by a central rev counter with digital gear display. It’s a simple view, and there’s something refreshing about that when so many sports cars choose to bombard you with information. That’s there if you want it, in the subordinate screens either side. How these operate takes some learning, and seems slightly primitive alongside rivals with touchscreens and central control knobs. The forthcoming SF90 does away with this dash layout in exchange for a 16-inch screen. Less romantic, but ought to be much more user-friendly. Doubtless it’ll migrate down to lesser models in time. 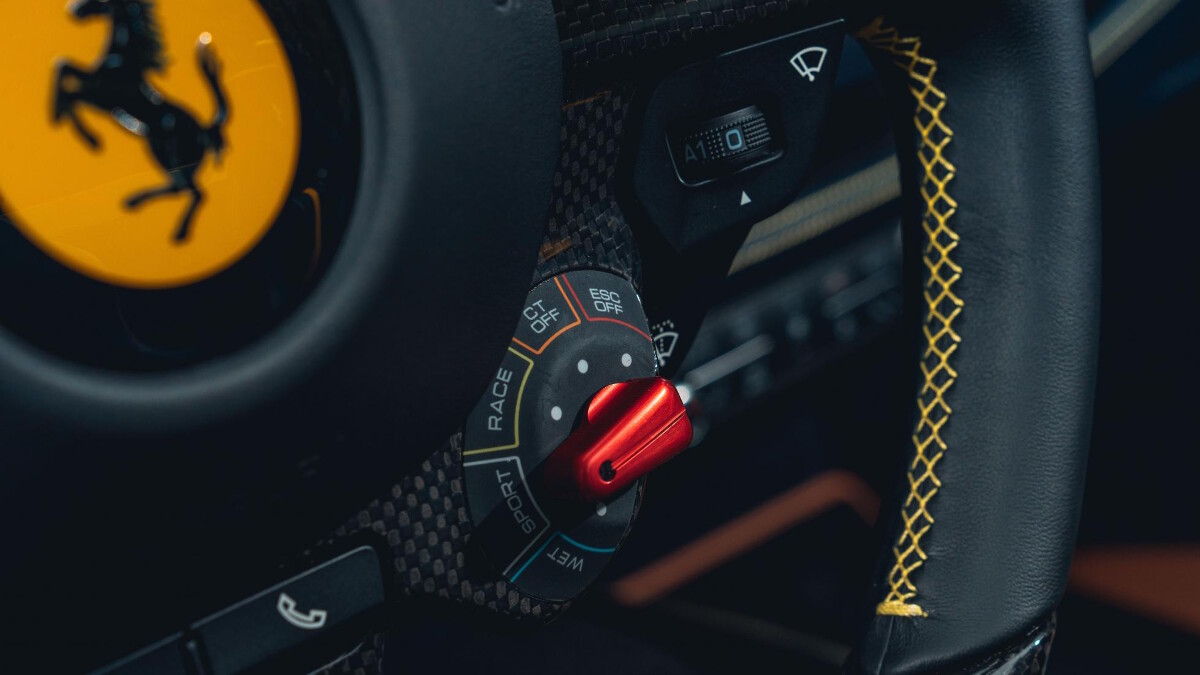 You view this through a slightly smaller steering wheel. It still carries all the controls, but mostly they’re logical. Cruise control is on a panel to the left, operated by a twist knob. Unusual and awkward. Enjoy music? Not here you won’t—the £3,552 (P220,740) JBL hi-fi is pretty poor. You can at least operate your phone reasonably well via Apple CarPlay or Android Auto, but the sound quality leaves a lot to be desired.

As mentioned earlier, the roof can be dropped and raised on the move. That’s useful. And it stows in a very shallow compartment on the back deck. On the other end, the front cargo area is anything but shallow. In fact, the 200-liter nose load bay is properly commodious. 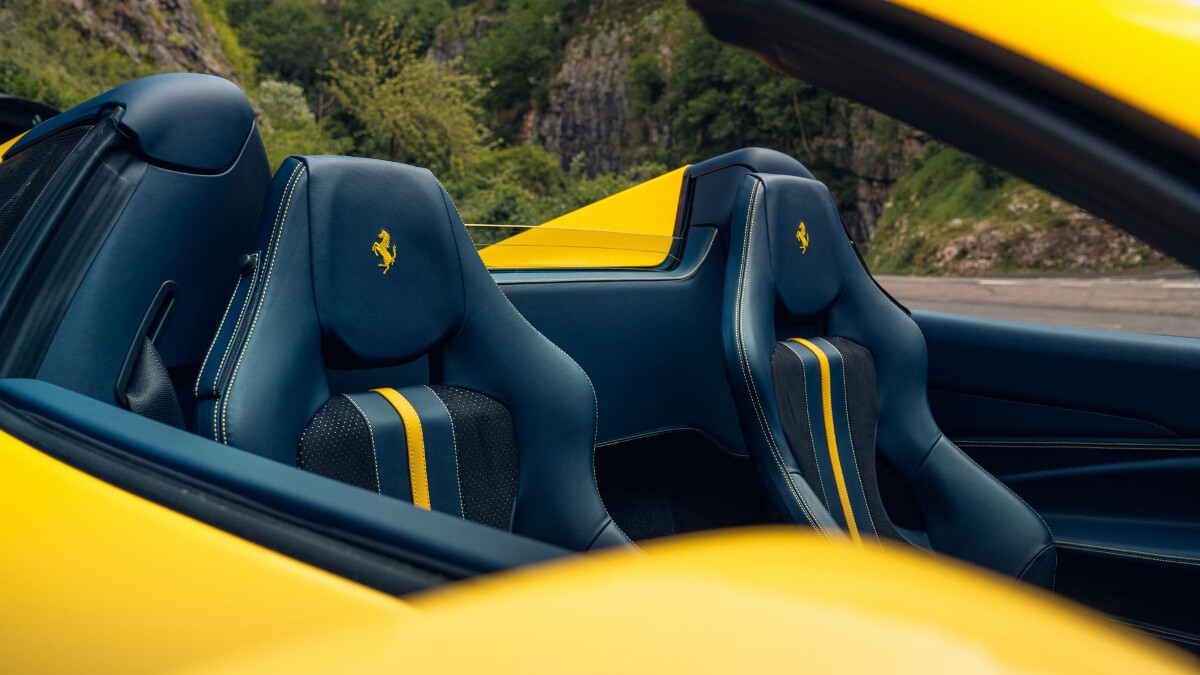 Nothing much wrong with the driving position, either, but think twice before spec’ing the £5,184 (P322,155) carbon-fiber racing seats. They seem to have a lumbar lump just where your belt sits. And as we’ve come to expect from Ferrari, the quality of the materials and the solidity of the build are very impressive. 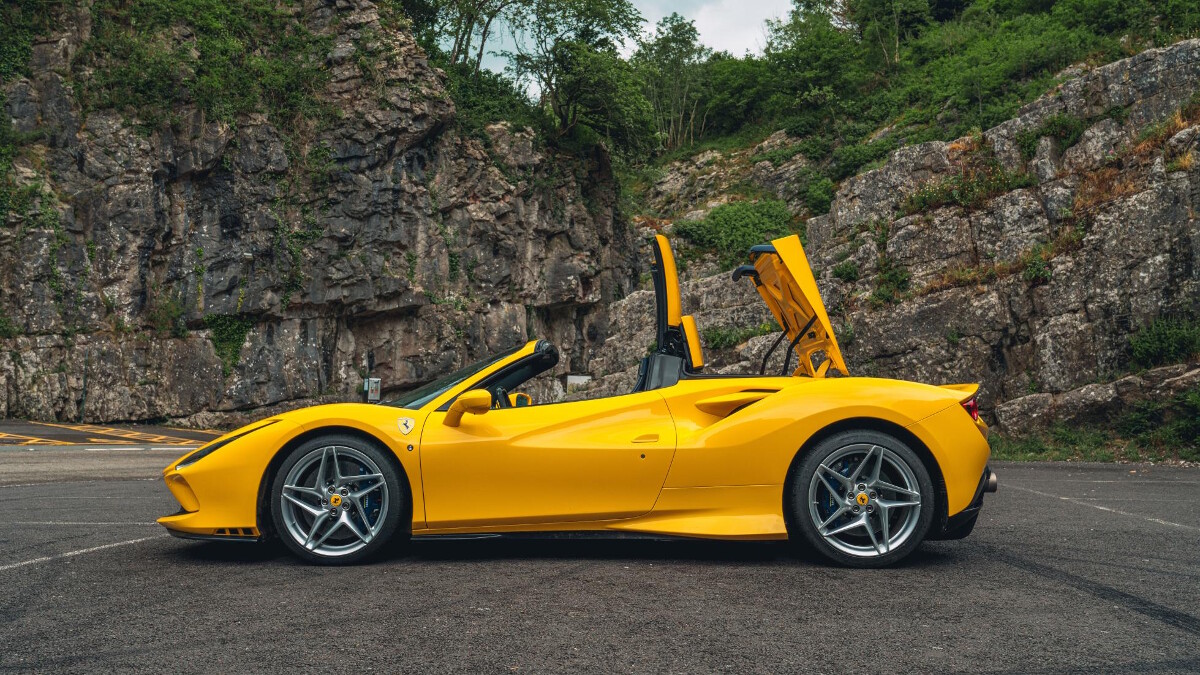 Remember what we said in the introduction: The F8 is a facelifted 488. Approach this Spider with that in mind and you won’t be disappointed. Hell, you’re unlikely to be disappointed, anyway—certainly not if you prize the way a car drives above all. This is a scintillating, exciting car, and the extra tuning the engineers seem to have put into the steering and suspension makes the F8 feel more harmonious than the 488, with crisper, more predictable road manners. But it doesn’t move the game on, or indeed catch up with the advances McLaren made with the 720S. The scuttle shake may not fundamentally spoil the driving experience, but it’s a surprise to feel.

At least there’s no denying the twin-turbo V8 engine is an absolute masterpiece. Above all else, and as should always be the case in a Ferrari, this savage beating heart sets the tone for the whole car and gives it a sense of immediacy and excitement that no rival has an answer to, even if many of them are actually more enticing to listen to.

However, the F8 comes across as a car that wasn’t given quite as much time and attention as it deserves. Hardly surprising, you might think, given Ferrari has had its hands full developing the SF90, the Roma, and the rumoured Purosangue SUV. Busy times. But you’re not thinking about that when you drive the F8 Spider—you’re just having a bloody good time. 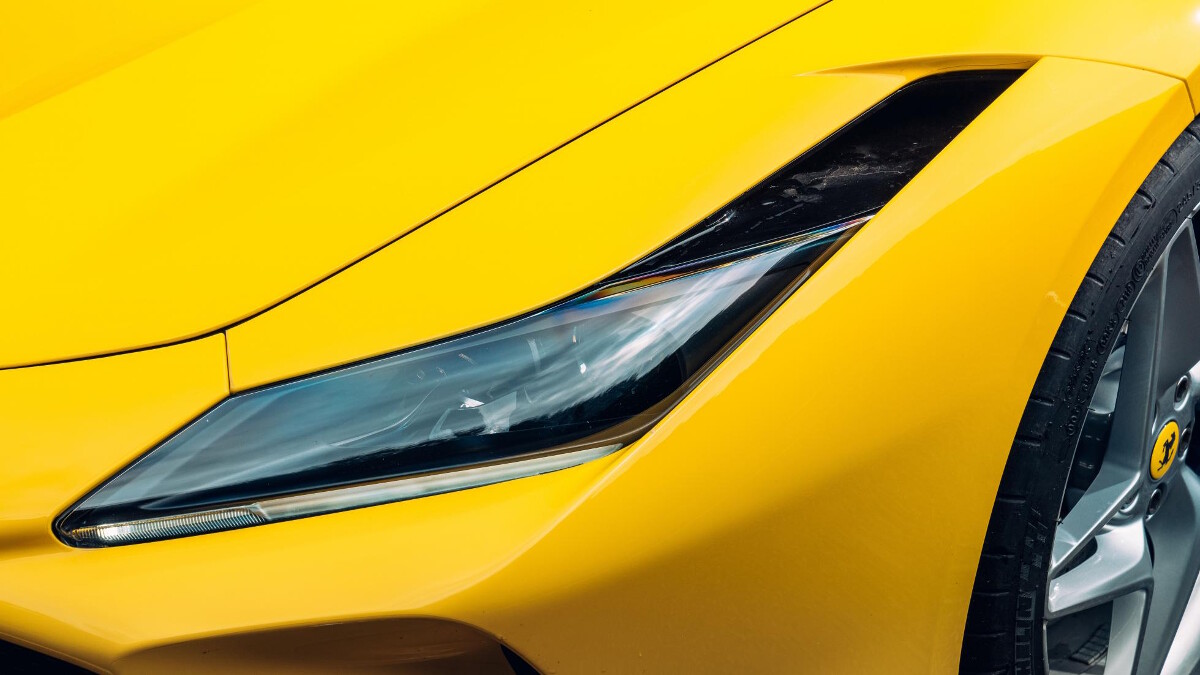 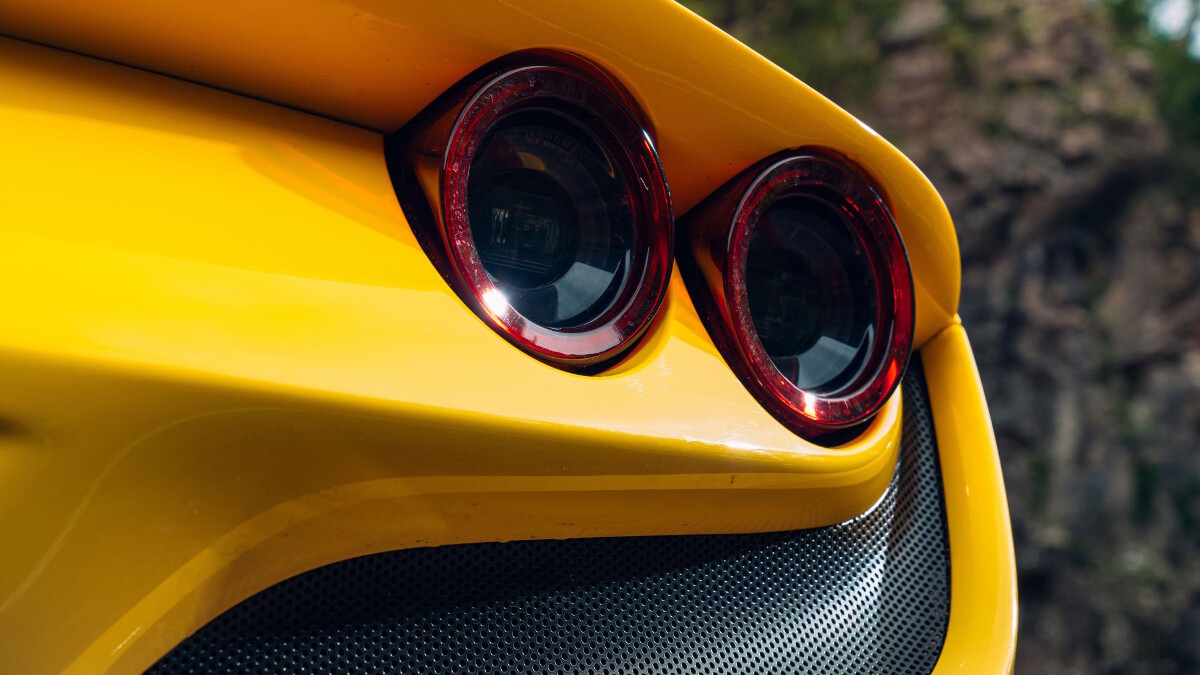 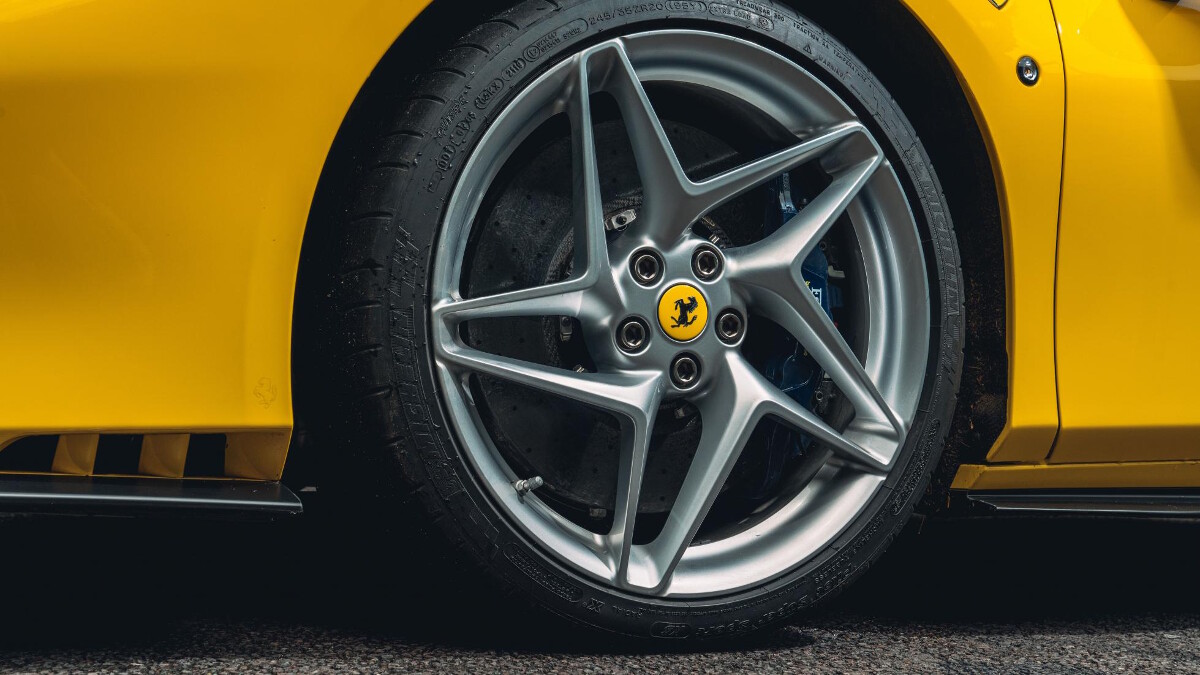 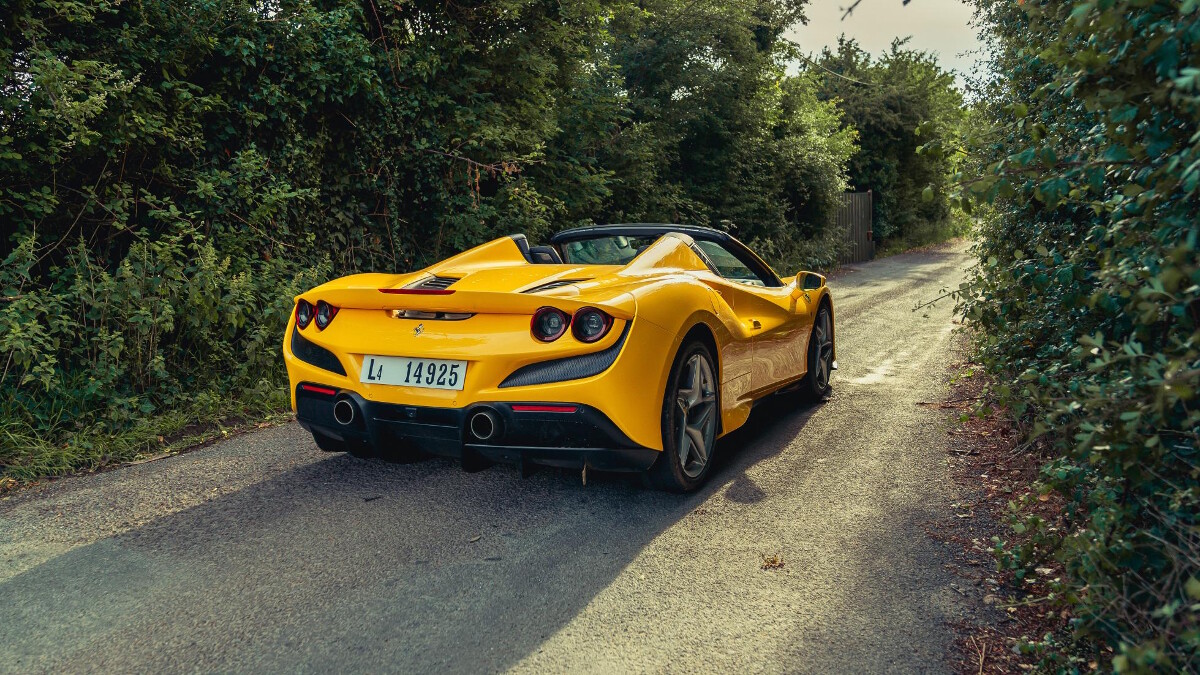 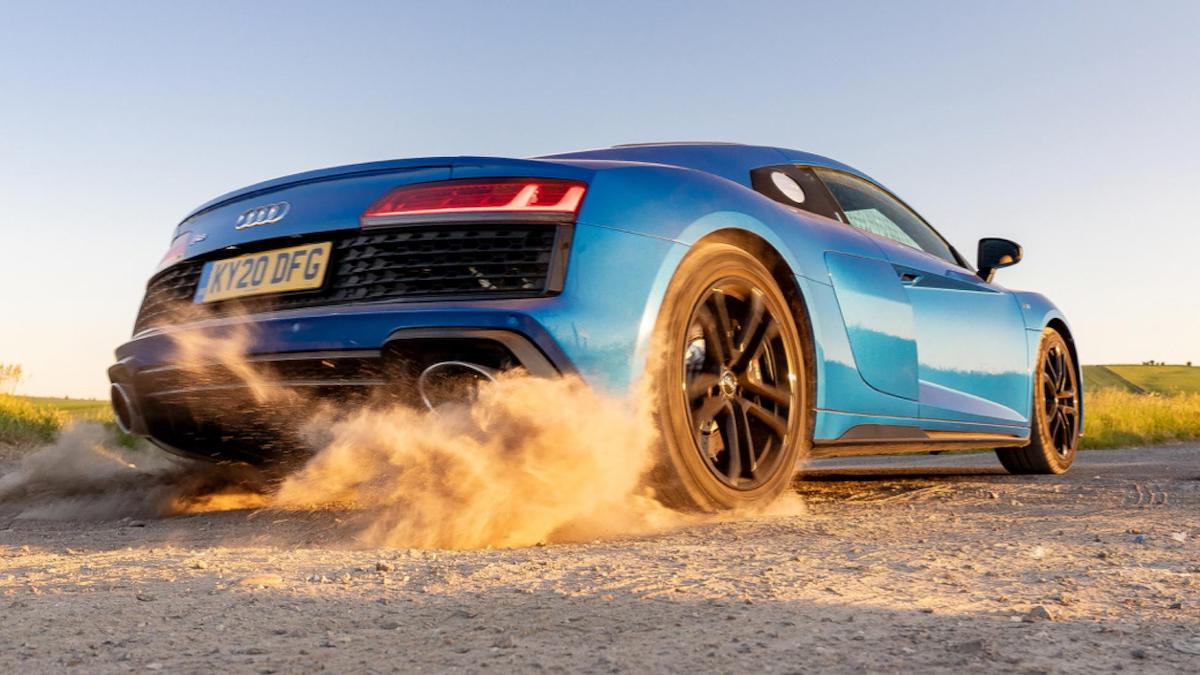 How good is the entry-level RWD Audi R8?
View other articles about:
Recommended Videos
Read the Story →
This article originally appeared on Topgear.com. Minor edits have been made by the TopGear.com.ph editors.
Share:
Retake this Poll
Quiz Results
Share:
Take this Quiz Again
TGP Rating:
/20