The Mazda CX-30 looks sharp, but what exactly is the point of this crossover?
by Anton Andres | May 15, 2022
Toyota Corolla Articles
Feature Article

In the land of pickup-based SUVs, crossovers have an uphill battle to face. Crossovers typically do not have the ground clearance, seating capacity, or perceived robustness these truck-based vehicles have to offer. It’s reflected in sales, too. Remember the time the Toyota Fortuner became the best-selling model in the land?

So, what hope does Mazda have of convincing SUV shoppers to fork out hard-earned savings for the CX-30? We’ll answer that in a bit. 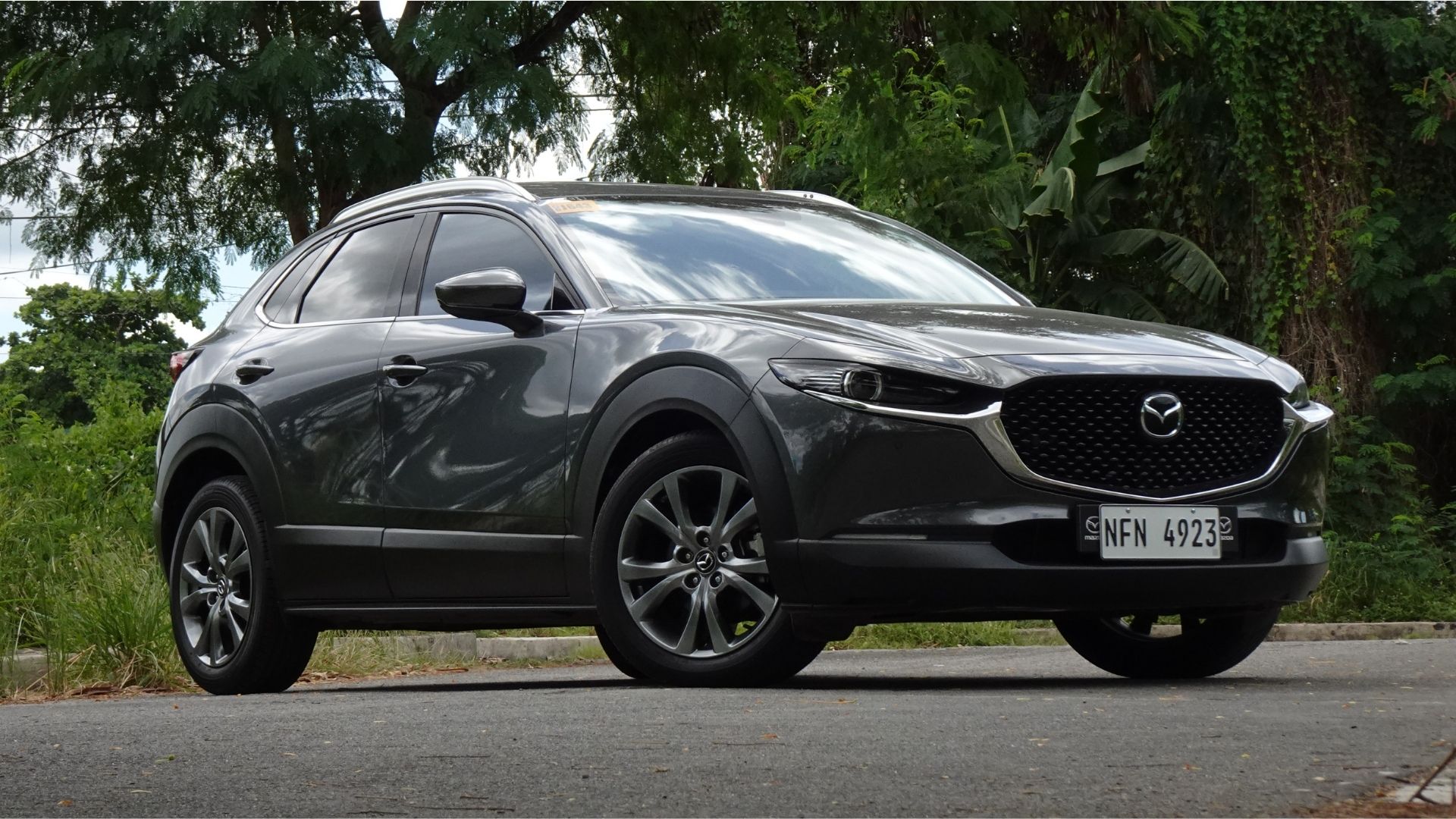 In terms of design, the CX-30 makes little attempt to look like an off-roader. It sits relatively low with a sleek roof line and rakish proportions. The sharp and aggressive lines are reminiscent of the model the CX-30 is based on, the Mazda 3 Hatchback. Those design cues are most prominent at the front, especially with those slim headlights and pointed nose. 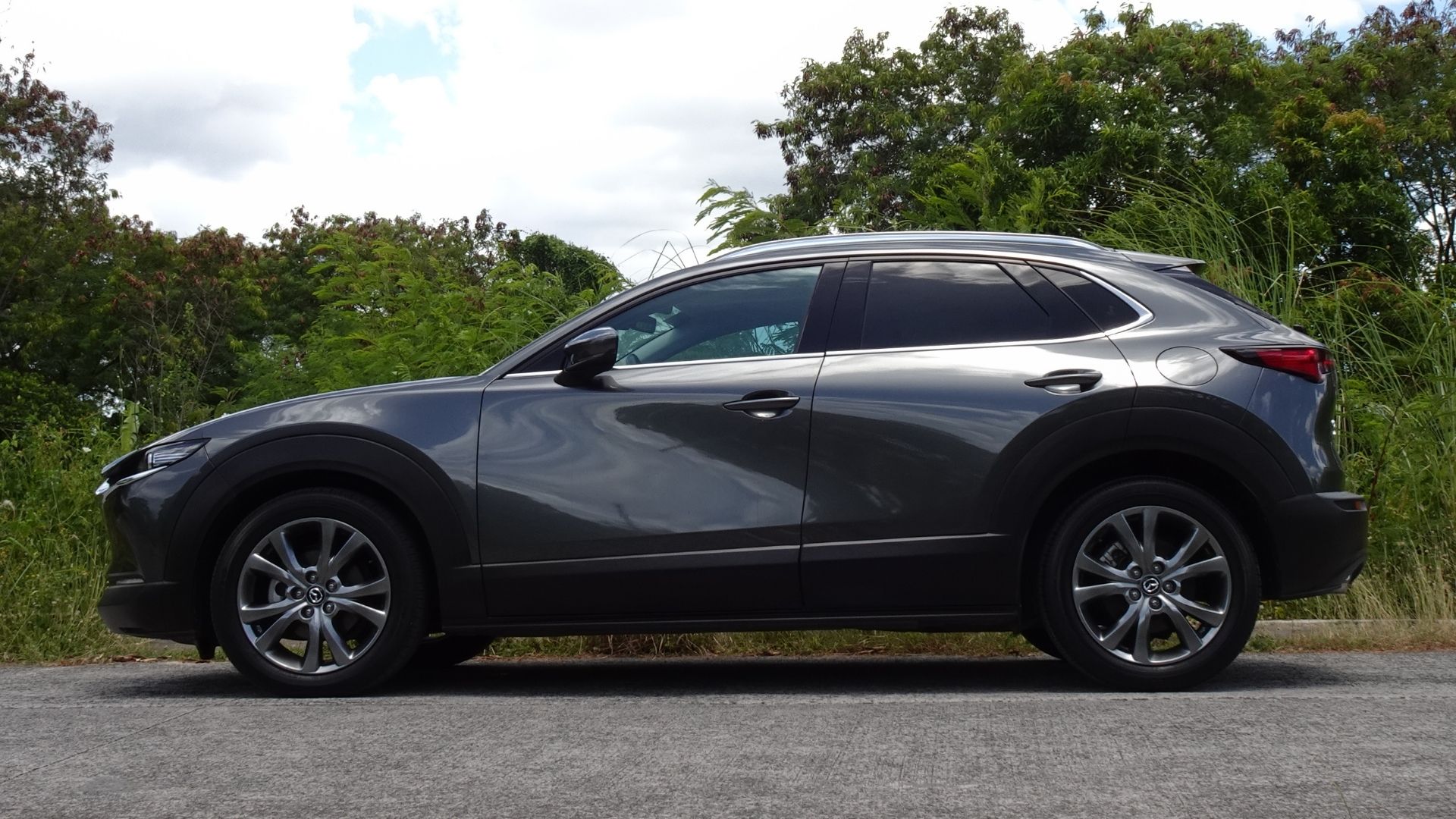 It looks more like a sporty hatchback from the side, too. The high sills and small windows give the impression that it’s a low-slung vehicle, not a typical crossover. As for the rear, you can put a Mazda 3 badge on it and the casual passerby will take it as it is. If anything, the only SUV cues seen here are the plastic claddings and the roof rails. 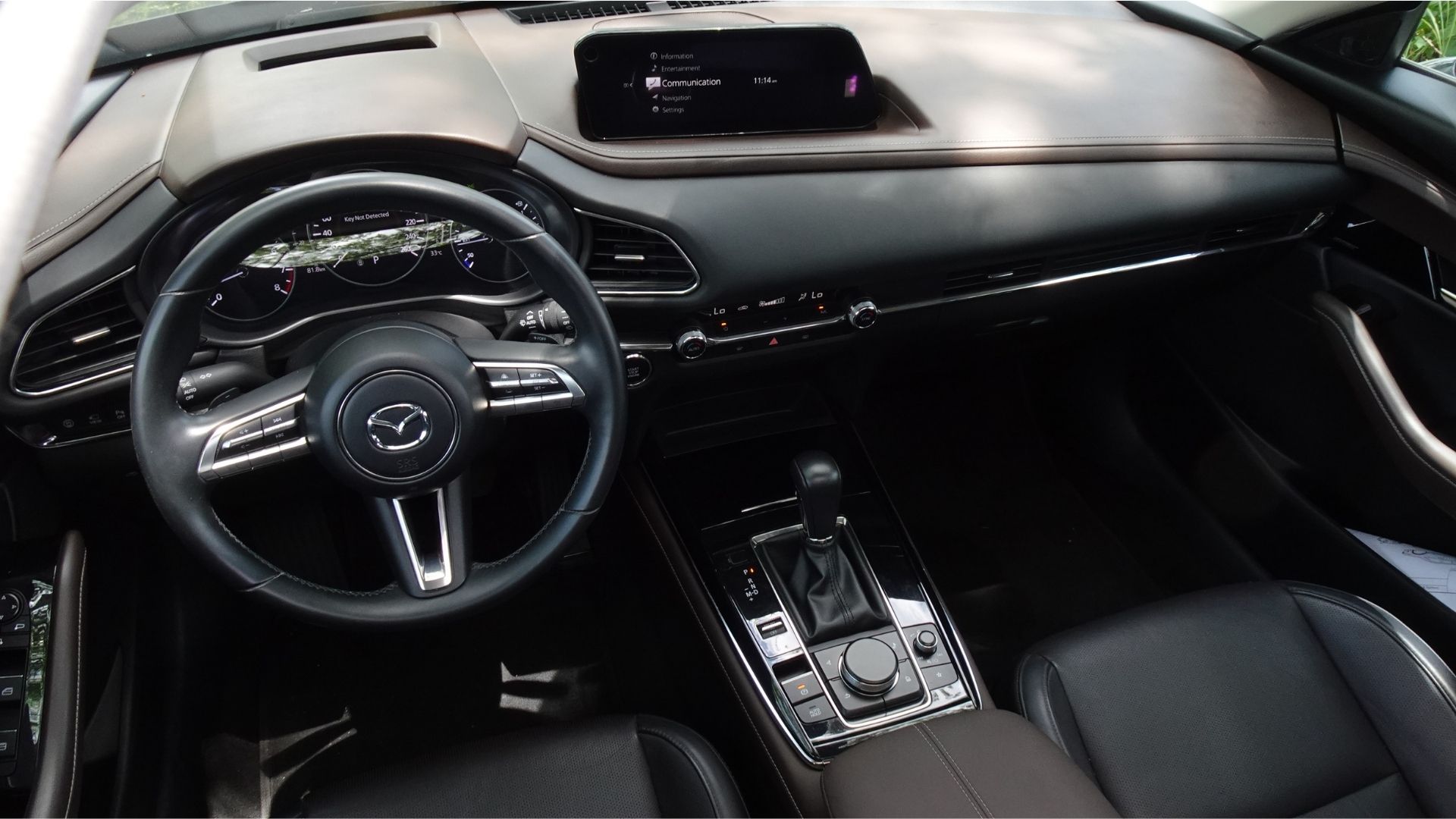 If you’re a long-time Mazdafarian, you’ll be right at home inside the CX-30. But if you’re expecting a high, commanding driving position, you won’t find that here. Instead, you get a relatively low driving position that makes you feel more intimate with the car. Enthusiasts will also appreciate the driver-oriented dashboard and the wide range of adjustability from the seat. Not only that, the wraparound dash makes you feel that you’re sitting in the CX-30, not on it. 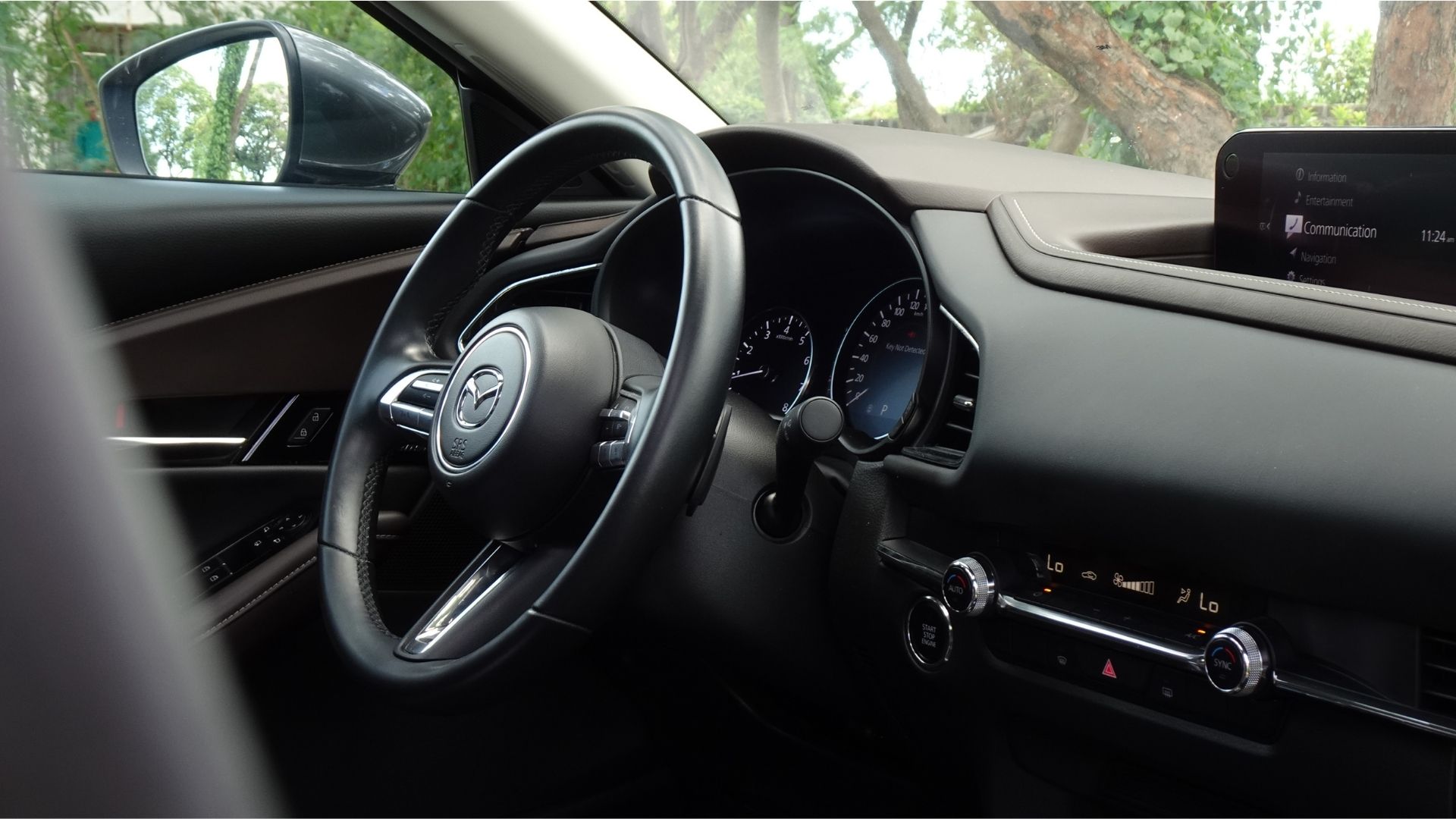 You’ll enjoy sitting inside the CX-30 if you appreciate premium design and feel. The cabin wouldn’t look out of place in luxury vehicles thanks to its swooping curves and lines. The look is harmonious and organic, a refreshing sight given that more automakers slap on large screens and call it a day. On top of that, your hands will barely feel any hard plastics, giving you the impression that it’s an expensive vehicle. It’s also great that Mazda kept physical buttons and dials for climate control and infotainment. That means you don’t have to dig around menus to do simple tasks.

NEWS YOU MIGHT HAVE MISSED:
PH car sales: CAMPI figures show 25,149 units sold in April, Toyota remains number one
Spied: This might be the sixth-generation Honda CR-V

Speaking of the infotainment system, some might compare it to BMW because of the scroll wheel. However, it reminds us more of previous-generation Audis because of the way they’re controlled. It may seem daunting at first but one can get used to it in less than a day. That said, you’ll have to use the wheel to move around Apple CarPlay and Android Auto menus. 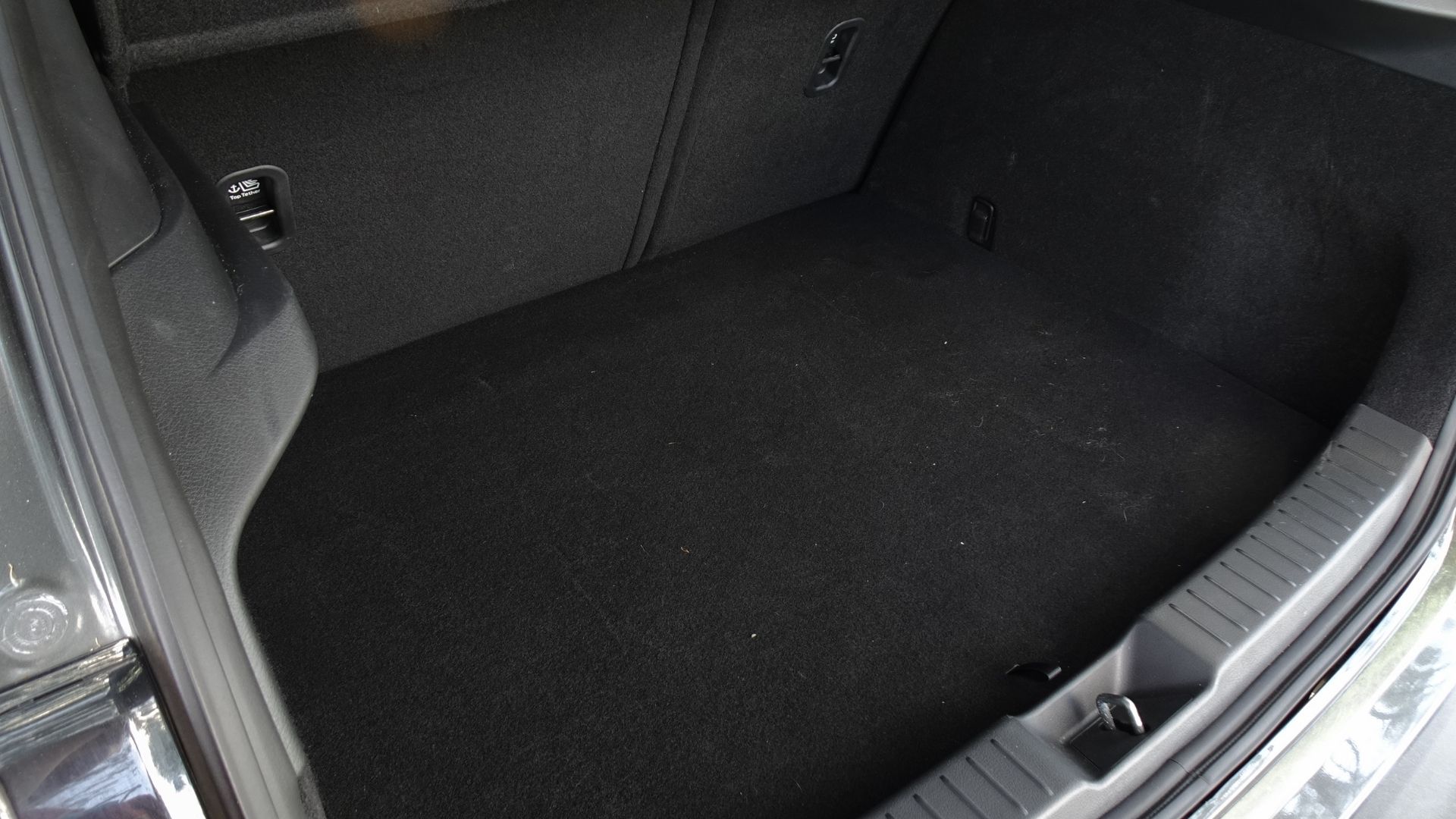 As for space, taller folks might find themselves brushing their hair against the headliner. The sunroof robs a bit of headroom, but the Mazda’s wide range of seating adjustments should cancel that out. The room at the front is no problem, but those at the back might feel claustrophobic due to the legroom and slim windows. If you need to carry things at the back, you have over 400 liters of cargo space. It’s a bit of a surprise given that it looks more like a hatchback than a crossover. 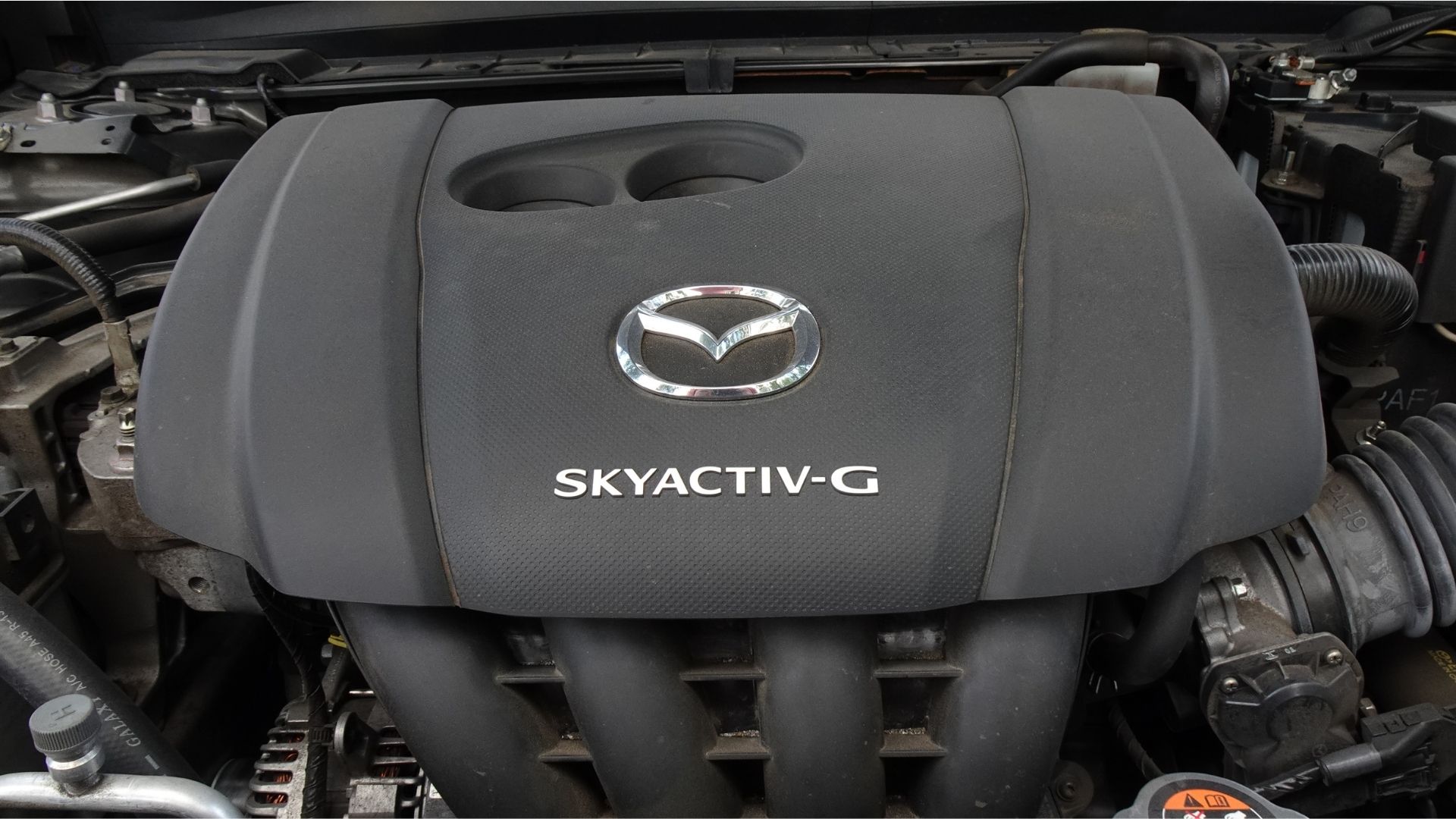 Mazda bucks the trend of downsized turbo engines by sticking to a naturally aspirated mill. It’s a 2.0-liter unit good for 153hp and 200Nm of torque that sounds conservative by today’s standards. In an age of high-output, small capacity turbo engines, the numbers the CX-30 produces might sound underwhelming for some. The all-wheel drive system adds several kilograms to the overall weight, and all the electric motors that move parts around make it far from a lightweight vehicle.

Because the engine demands revs, you might think the CX-30 has sluggish engine response at low speeds. However, the power delivery is decent and the quiet operation makes you feel like you’re moving slower than the speedometer suggests. It’s not a high-performance engine, but it’s good enough for most. It’s good for a non-boosted 2.0-liter, but those spoiled by turbo power might want more. At least the transmission is smooth and makes the most out of its six forward gears.

The performance isn’t sparkling, but you’ll be impressed with its fuel economy. Typically, a 2.0-liter engine paired with all-wheel drive is a terrible combination for efficiency. But it’s not the case at all in the CX-30. In anything, the efficiency figures of the CX-30’s 2.0-liter can match smaller, less powerful engines. Up to 9.4km/L is easily achievable in moderate traffic, and it still returns about 8km/L in heavy traffic. Heck, a spirited drive downhill still displays nearly 12km/L on the on-board computer. 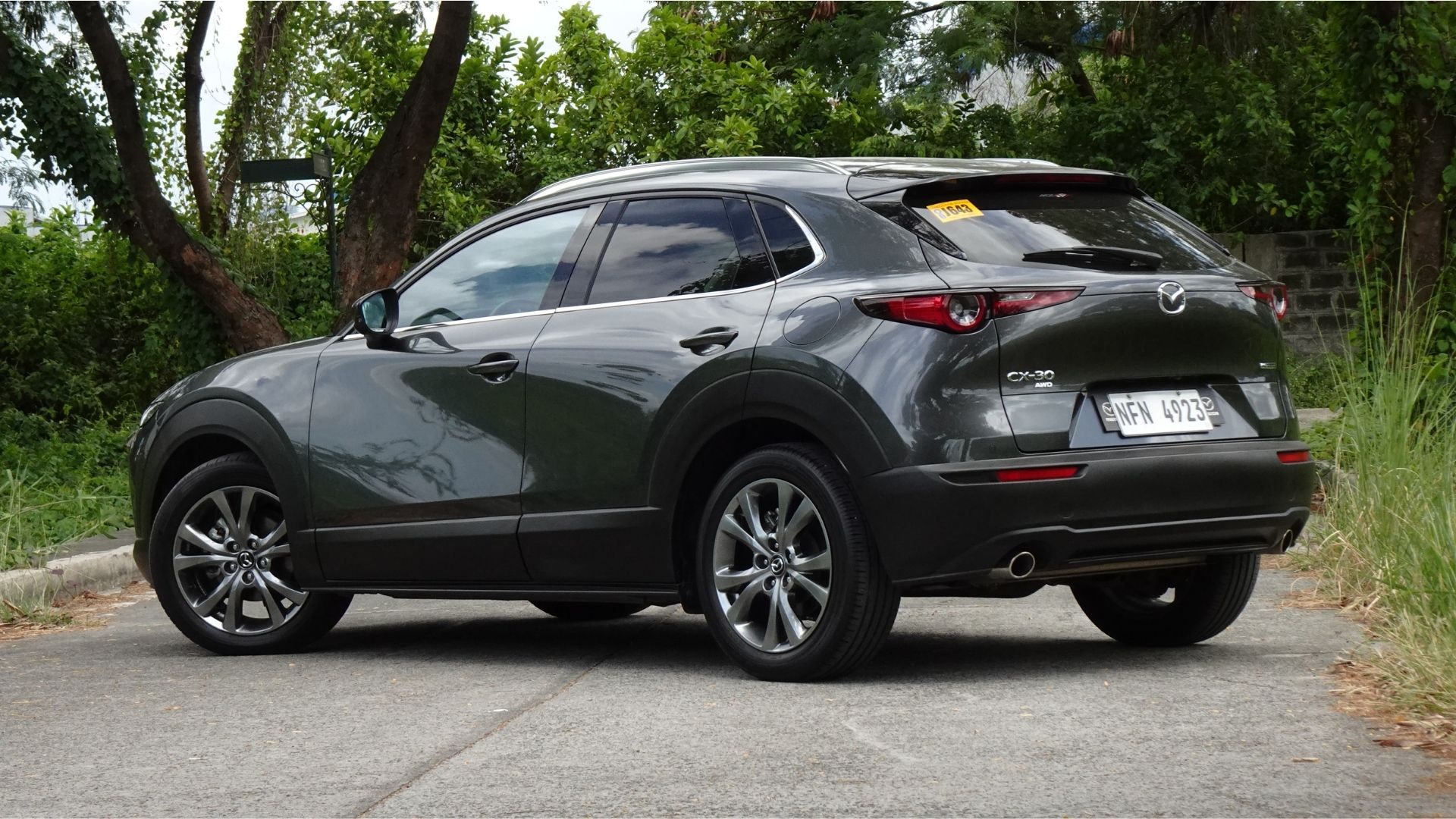 As for handling, it’s what one expects from Mazda in recent years. Despite the crossover label, it drives even better than some cars that sit lower to the ground. But the CX-30’s handling goes beyond roadholding. Aside from the grip, the steering turn-in is sharp and feels agile along winding roads.

There are no doubts about its dynamics, and it can easily win over those who prioritize driving dynamics above everything. But the best part is the CX-30 has something most of its competitors don’t: feedback. It may have an electronic power steering system but it’s well-weighted and the heft doesn’t feel artificial. It feels involving and its handling inspires confidence around the bends. We were glad to have the Mazda around as a camera car for a sports coupe shoot.

The penalty for its dynamic capabilities is the ride; but even then, it’s not a huge price to pay in terms of comfort. Yes, the suspension is firm and can draw complaints from those used to soft-riding vehicles. But it doesn’t mean the CX-30’s ride is choppy or uncomfortable. There’s just enough suspension movement to keep things level while retaining the handling we expect from Mazda. 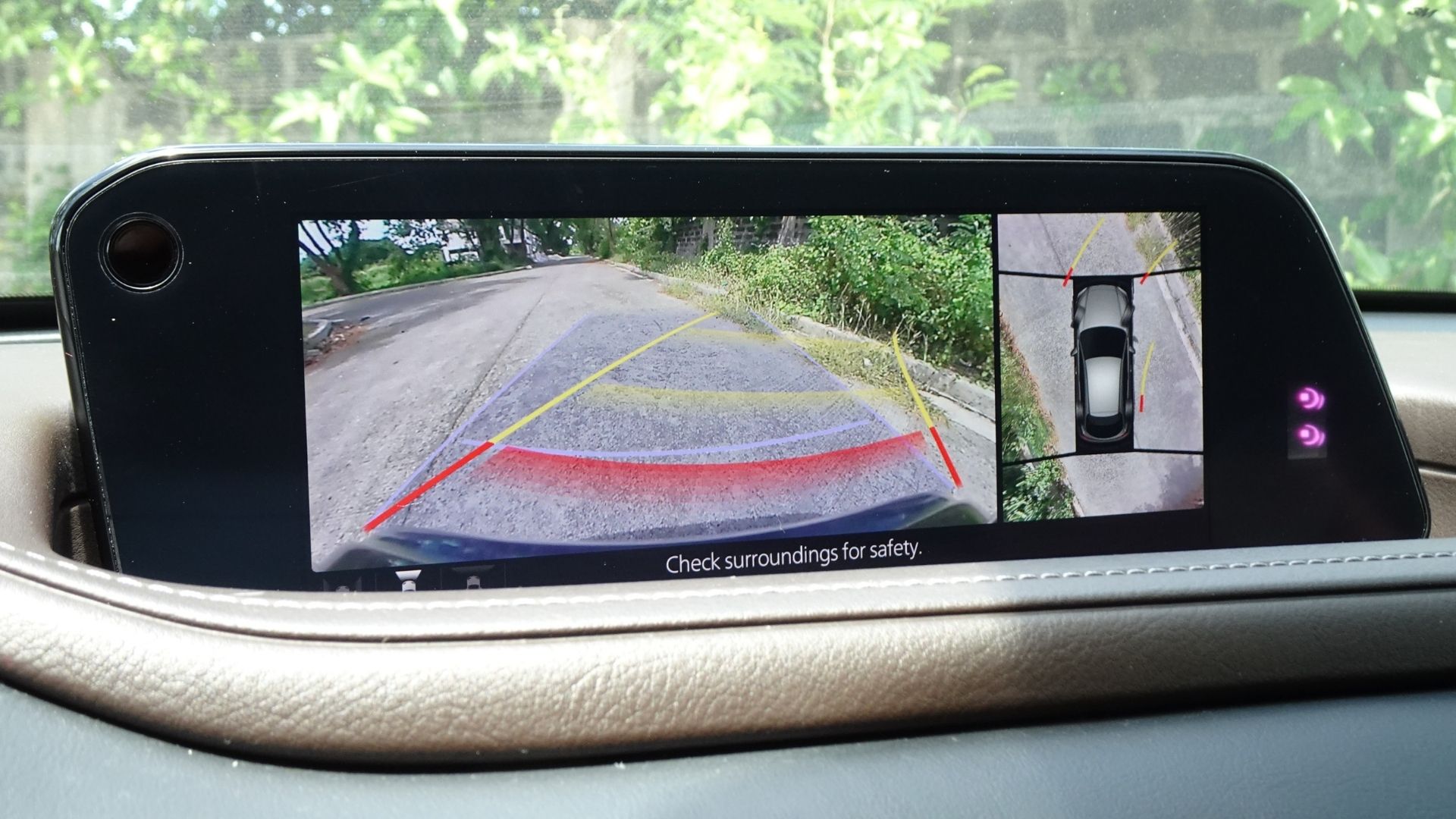 There are no doubts about the CX-30’s safety, too. The crossover comes equipped with a host of active safety systems that can help prevent accidents. It has adaptive cruise control, as well as automatic emergency braking for front and rear, and lane-keep assist just to name a few.

MORE ON MAZDA:
Buy this Mazda MX-5 Cup car, and you can join the local Miata Spec Series
The Mazda CX-60 is the brand’s most powerful road car ever 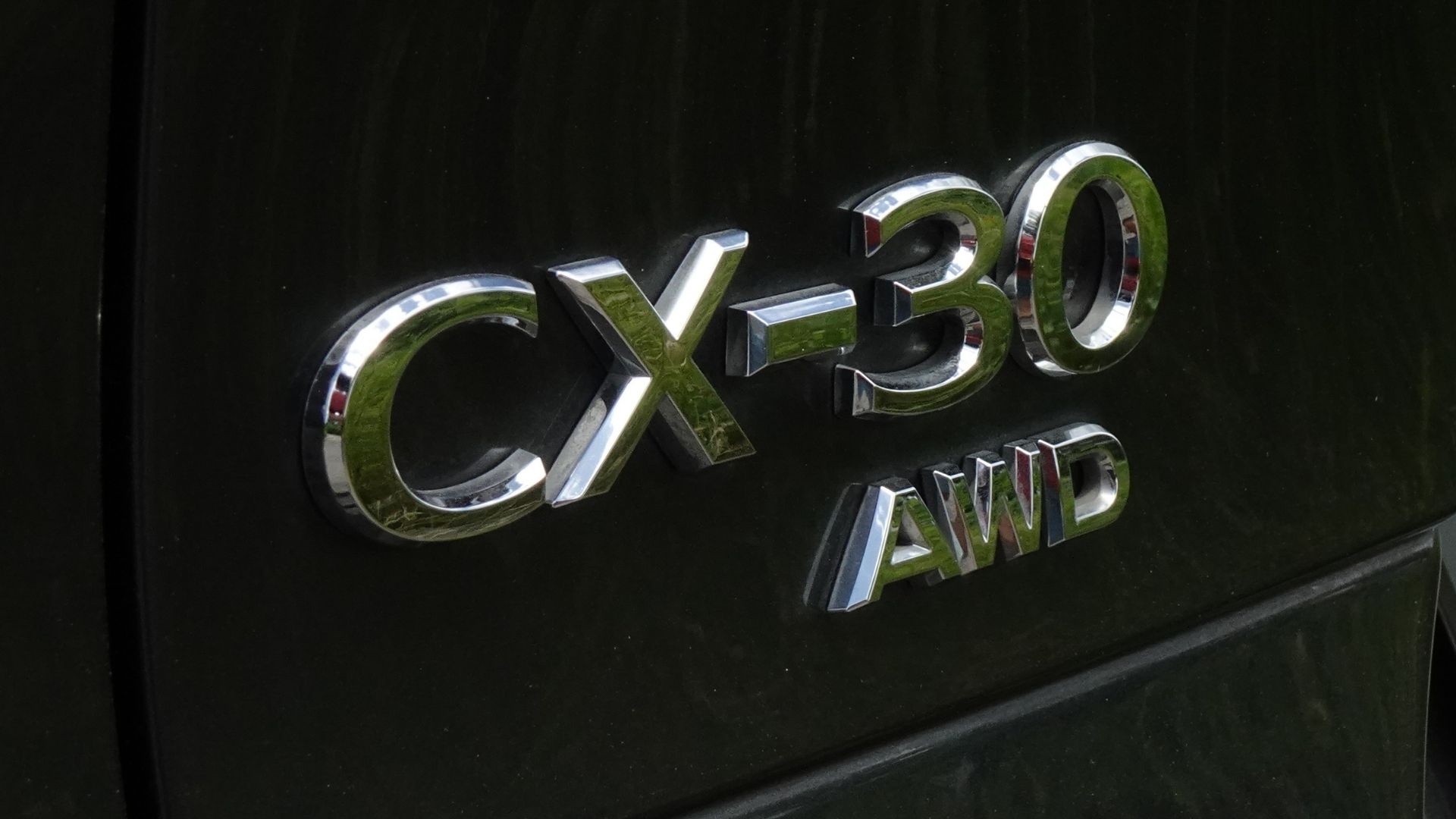 To answer the main question, the CX-30 will not convince those shopping for a truck-based SUV. That’s because the Mazda caters to a niche that wants some degree of practicality while offering a whole lot of style and driver involvement. It’s for people who are firm on not wanting a traditional SUV and want something more individual. With that in mind, it’s a niche vehicle, but one that can appeal to those who seek a different crossover ownership experience.

However, you should be ready to pay a relatively steep price for that experience. The CX-30 with all-wheel drive will set you back P1,990,000. For the same money, you can get yourself a bigger and more practical CX-5 with a 2.5-liter engine and all-wheel drive. Choosing the CX-30 over the larger CX-5 isn’t a practical choice, but the subcompact Mazda appeals more to emotion than logic. 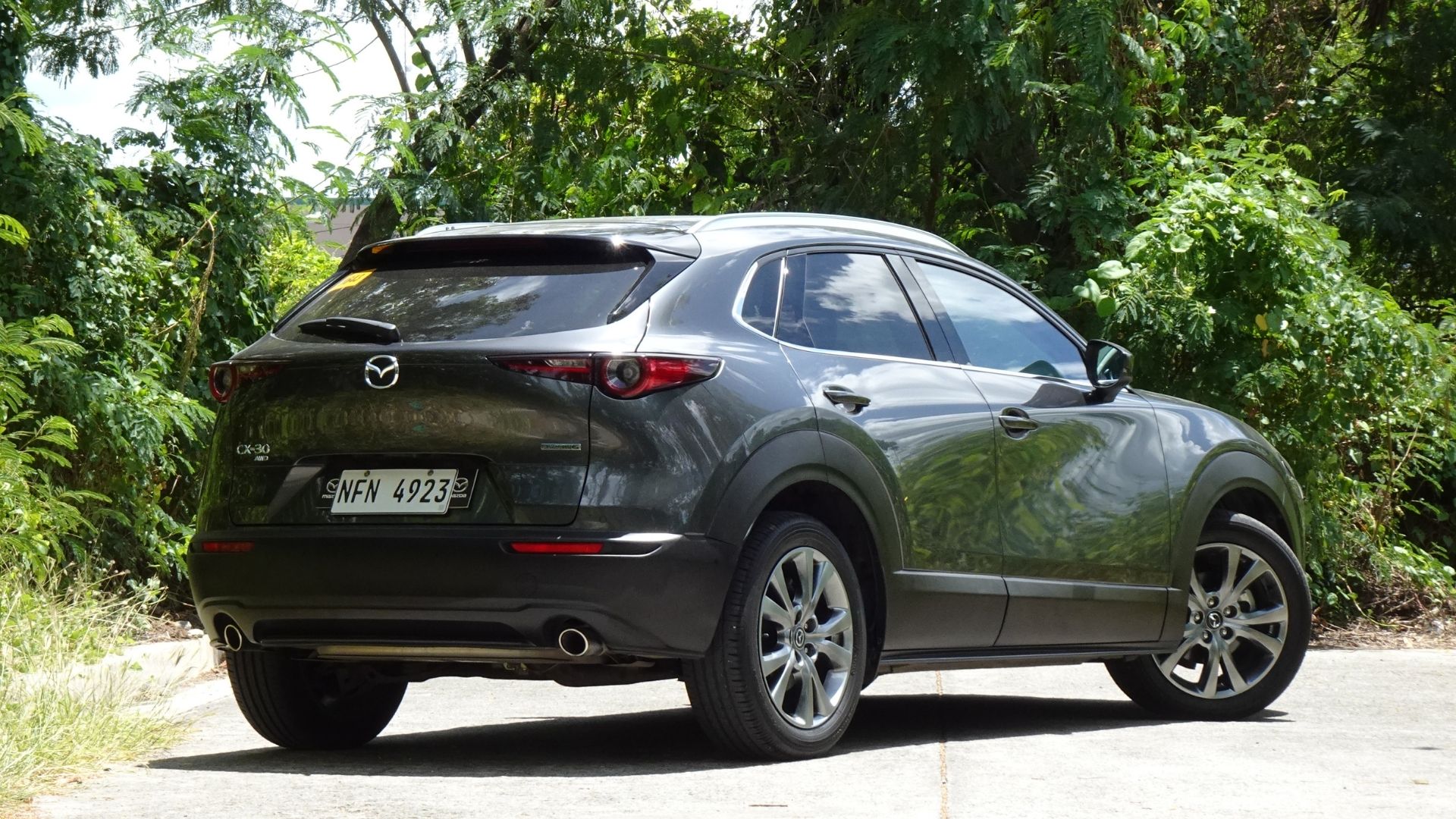 For those who let their heart win over their heads when it comes to buying cars, the CX-30 won’t disappoint. But for those who need something more practical, at least you still have something in the Mazda stable for those purposes. 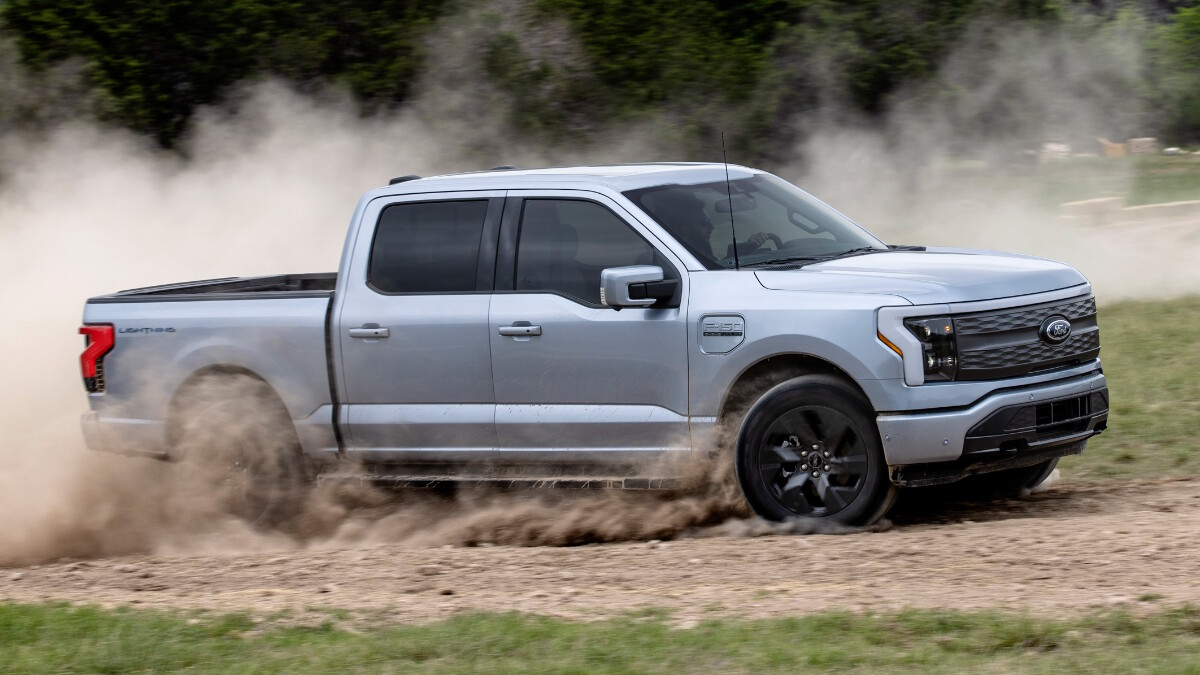