Review: The 2022 Toyota Aygo X is nothing revolutionary, but it’s a fun little car

“The presence of a manual gearbox can make it enjoyable to drive”
by TopGear.com | Feb 12, 2022
CAR BRANDS IN THIS ARTICLE

This is the Toyota Aygo X, and it’s here to prove that city cars do still exist—they just look a little bit different these days. Oh, and that X is actually pronounced “cross,” despite not being written out in full like on the back of the new Yaris Cross or the Corolla Cross.

Where have I seen it before?

Born from the lightbar-equipped Aygo X Prologue concept that we first saw back in March 2021, Toyota describes the Aygo X as a “new generation of accessible style and fun.” Of course.

The finished product was fully unveiled in November 2021, although Toyota rewrapped some of the crossover-style black plastic cladding for our first drive. Technically, this is the first car to be fully-designed and developed by Toyota’s European branch. Looks rather good, no? It’s identifiably Aygo with the glass rear hatch, pop-out rear windows, and contrast roof, but it’s slightly smartened up with LED lighting and 17- or 18-inch wheels.

Does this mean the old Aygo is dead? 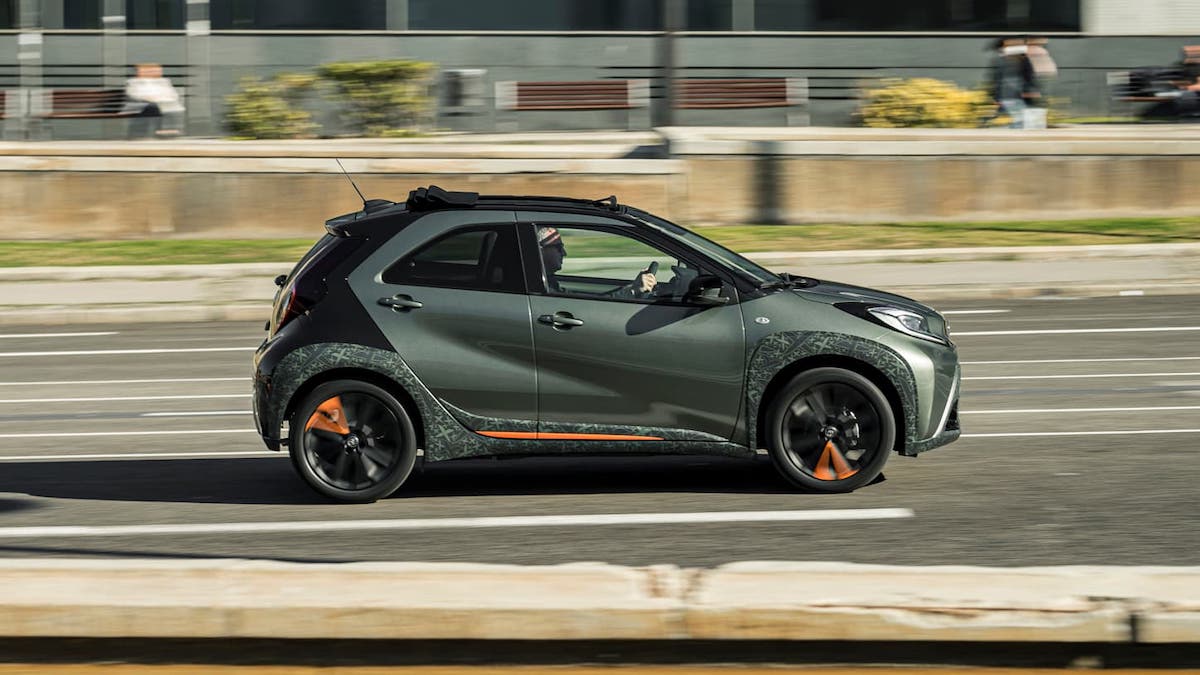 It does. In time, the X will replace the Aygo hatch completely. That car and its siblings (the Citroen C1 and the Peugeot 108) were built in Kolin, Czech Republic, but Toyota has now assumed full control of that plant as Citroen and Peugeot pull out of the segment.

The Aygo X is built on the same TNGA GA-B platform that also underpins the Yaris and the Yaris Cross, too, so Toyota will move some of its other hatch production in with the jacked-up Aygo.

Tell me more about the underpinnings...

Interestingly for 2022, the X is launching as a pure combustion-engined city car. Toyota sells enough hybrids to allow for that under European legislation, and when pressed, it reckons 66% of new cars in this A-segment will still be combustion-engined in 2025. 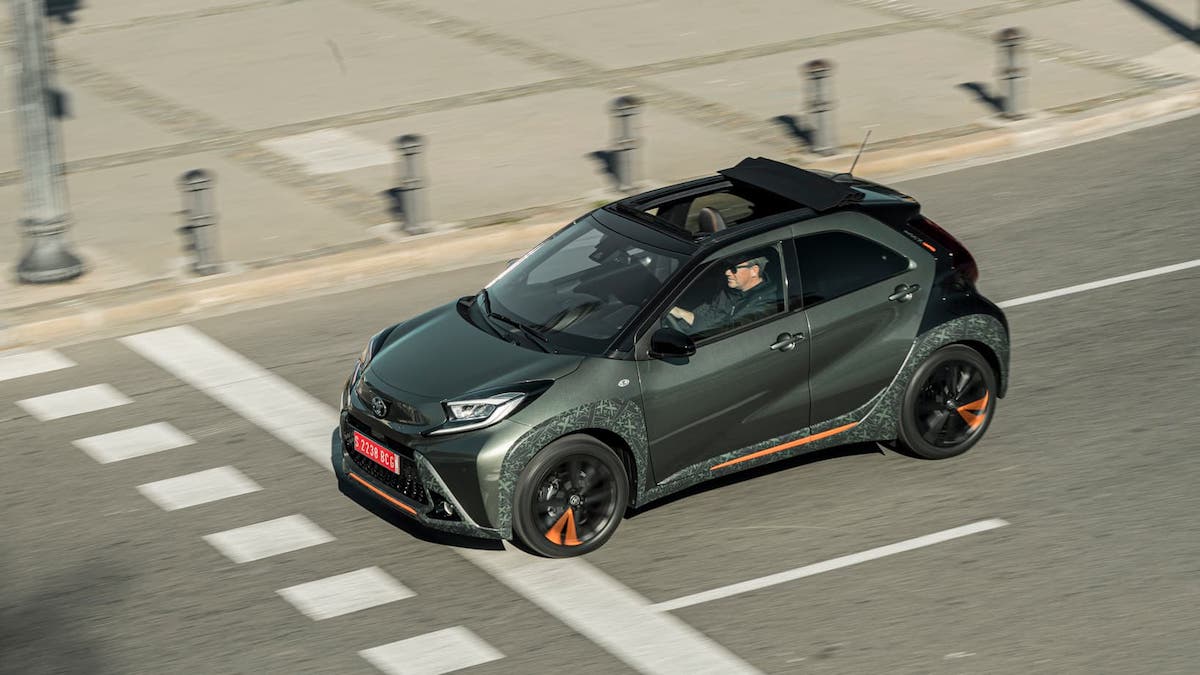 The powertrain is a low-cost solution, with a retuned version of the previous-gen Aygo’s 1.0-liter three-cylinder connected to either a five-speed manual or a small CVT. Despite the 11mm suspension hike, it’s front-wheel drive only, though. Toyota wants the rise to help with potholed city streets and to improve visibility.

Does this mean it’ll be more expensive than the old Aygo?

Prices for the X will start at £14,795 (P1.03 million) in the UK, which is just under £1,000 (P69,500) more than a base-spec Aygo hatch would have set you back. You’ll get more kit spec-for-spec,  and Toyota says that because of the current crossover craze, residuals will be higher, meaning monthly payments can be similar to that of the outgoing Aygo. Very sensible. 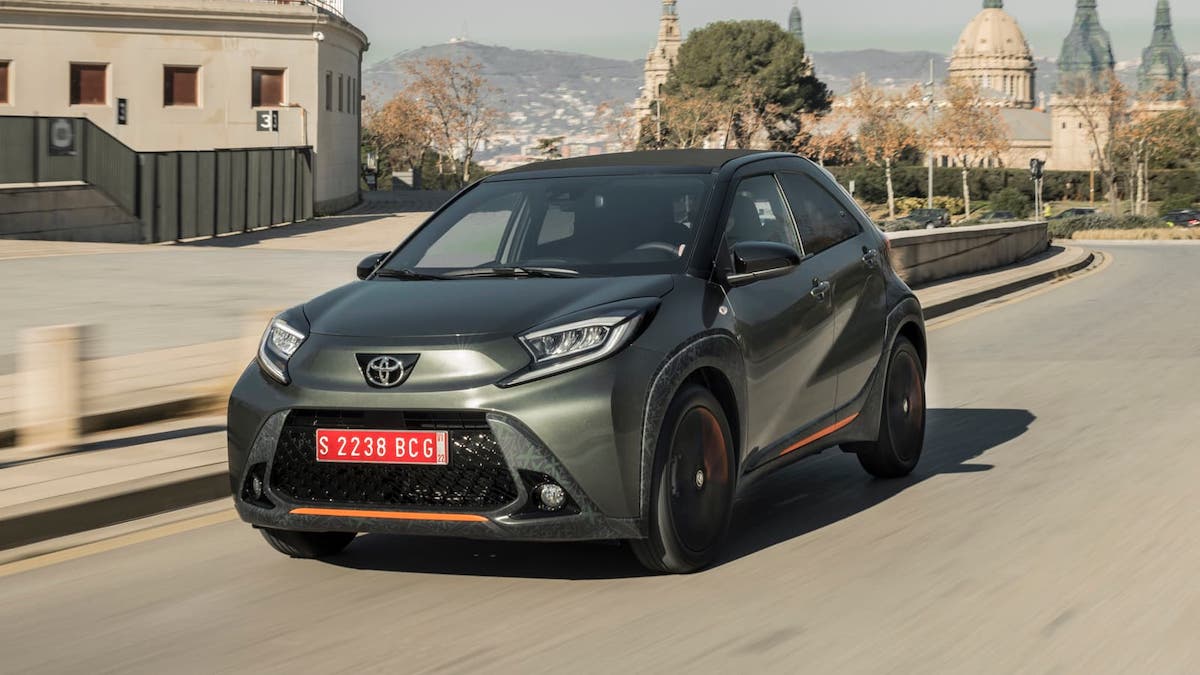 First thing to note is that the Aygo X is not a quick car. The naturally aspirated three-cylinder kicks out a mighty 71hp and 93Nm, and 0-100kph takes 14.9sec in the manual or 14.8sec in the CVT.

Does that really matter, though?

Good point. This might be a bigger car than the previous Aygo, but it’s still unlikely that they’ll leave city limits all too often. At low speed, the X is nippy enough, but get it onto a highway and the 1.0-liter does sound strained—even through the extra insulation compared with the old hatch.

Through twisty stuff, it fares better. The Aygo X stays remarkably flat despite the taller suspension and the higher center of gravity, while the steering is nicely weighted. The turning circle is also a usefully tight 4.7m.

Which gearbox should I go for? 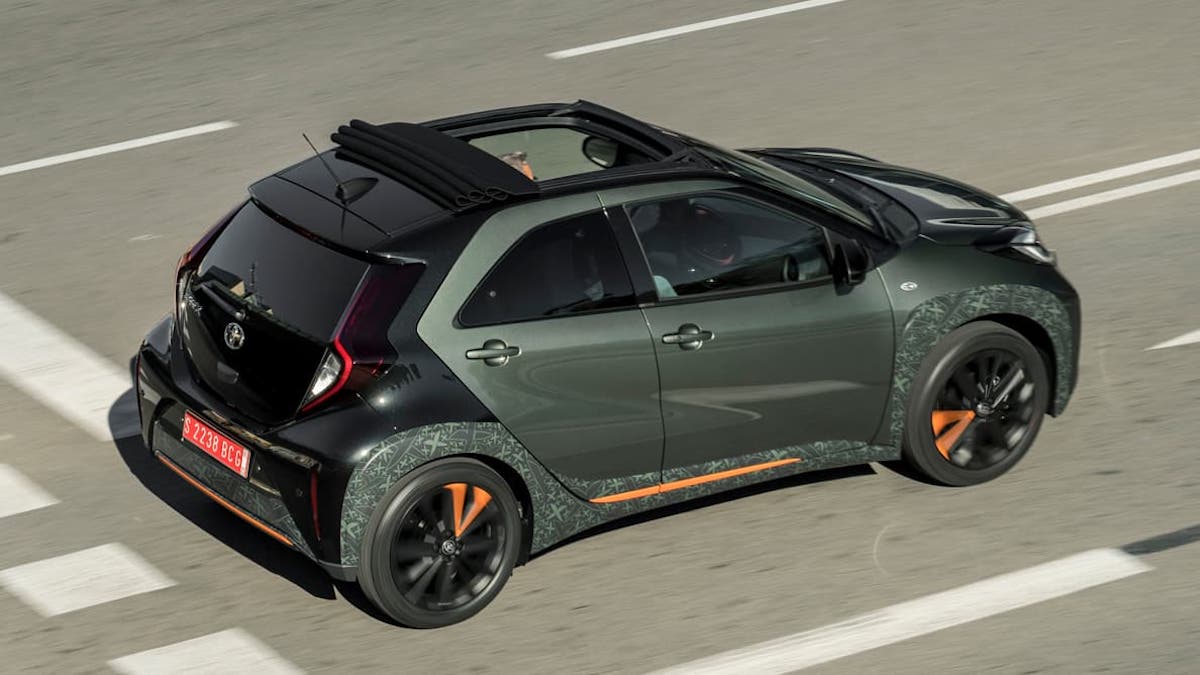 We’ve driven both the manual and the CVT. The manual would be our pick, but Toyota has done a very decent job with the continuously variable auto. The usual rubber-band feeling is only really there when you work the X hard, with this type of gearbox seeming to work better without a hybrid system to confuse things. Strangely, there is a proper manual mode and wheel-mounted paddles, but we highly doubt they’ll get much use in the real world.

The manual is a decent gearbox and offers more control when you only have 71hp on tap, although the bite point on our test car was unusually high. Not great for learners if that’s the case across the board. Toyota reckons the manual/auto split will be around 60/40. 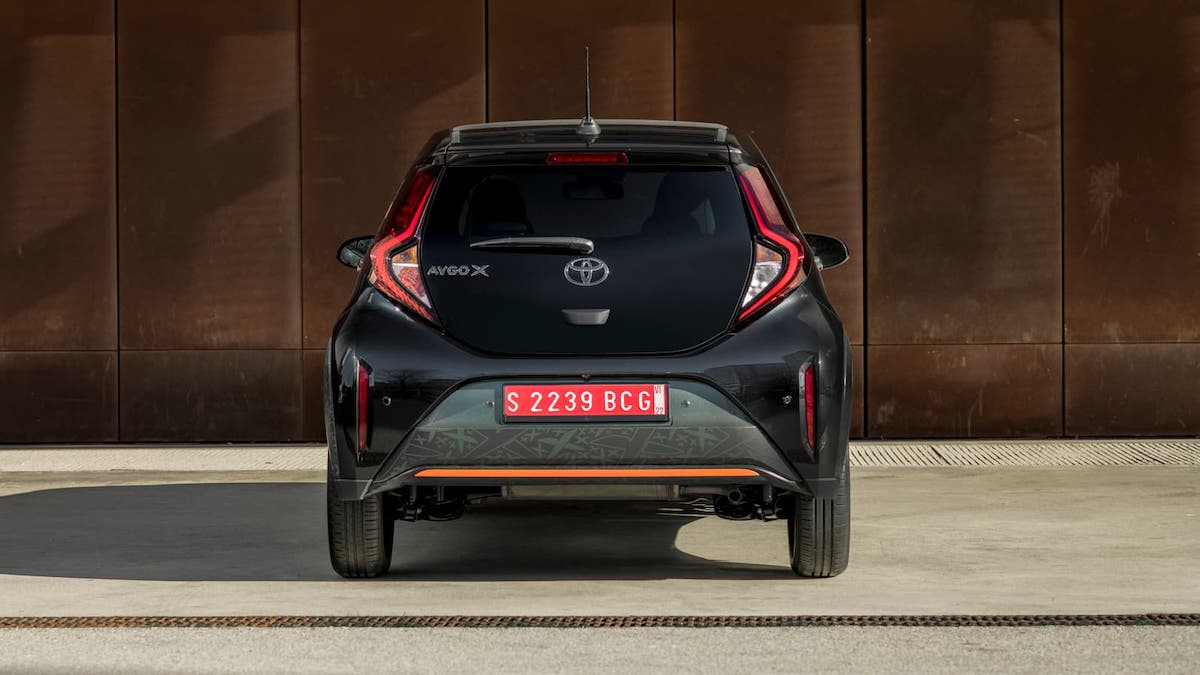 For a tall-ish car on skinny little tires with big wheels, the Aygo X seems to ride surprisingly well. We’re yet to drive one on bad roads, but it’s well-damped and there’s no shudder or shock over speed bumps.

It’s certainly not revolutionary, but then again, no part of the X’s driving experience really is. It has been designed for right now. It might not have the futureproofing, the refinement, or the instant torque of an EV, but it almost stands out as being a little bit fun to drive because of the lesser-spotted combustion-engine/manual gearbox combination and the circa-one-ton curb weight. 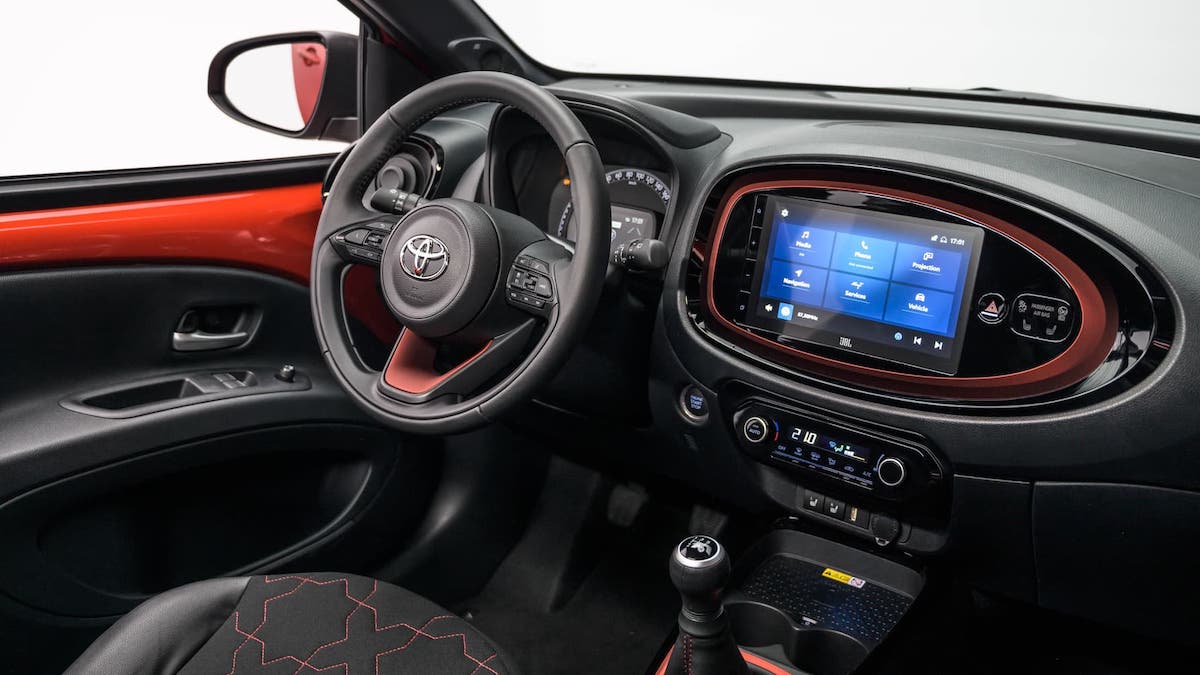 If you’ve sat up front in a current-gen Yaris, there’s plenty of bits you’ll recognize inside the Aygo X. The steering wheel, the infotainment, and the climate-control panel (yep, it has a proper one) all migrate from the larger, hybrid-only hatch and are sturdy, easy-to-use bits of kit. The driver display is very basic, boasting a small screen nestled inside a larger speedometer with a rev counter and a fuel gauge either side. It might not be a high-tech setup, but it’s clear enough.

There are four different grades of Aygo X: Pure, Edge, Exclusive, and Limited Edition. The latter two get a nine-inch touchscreen, while the Edge gets an eight-incher and the Pure makes do with a seven-inch unit. All get Apple CarPlay/Android Auto connectivity and all sit inside a neat little oval that’s the main feature of the dash. The materials don’t feel too cheap and are particularly strong in parts of the Limited Edition—the seats are especially comfortable. 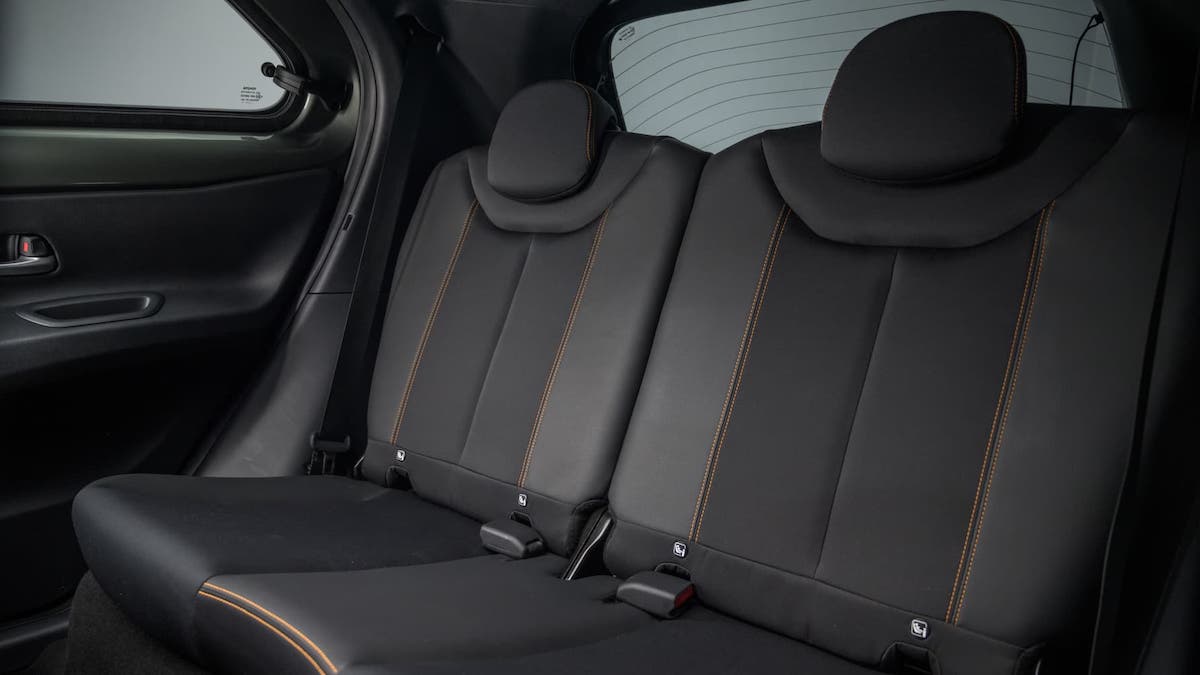 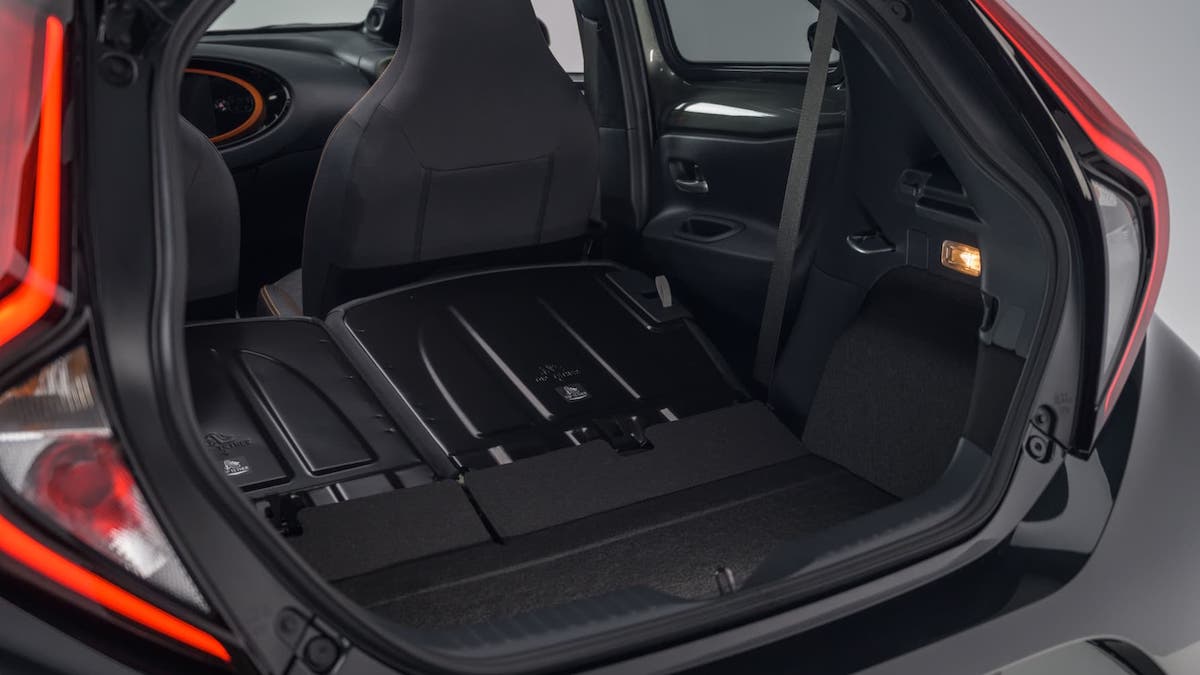 There’s plenty of space in the front, with loads of headroom and plenty of shoulder space if you’re two-up. But you wouldn’t want to be using the rear seats regularly: Legroom isn’t great and although it’s lovely, the optional canvas roof does eat into headroom in the back. The cargo area is a reasonable size at 231 liters. 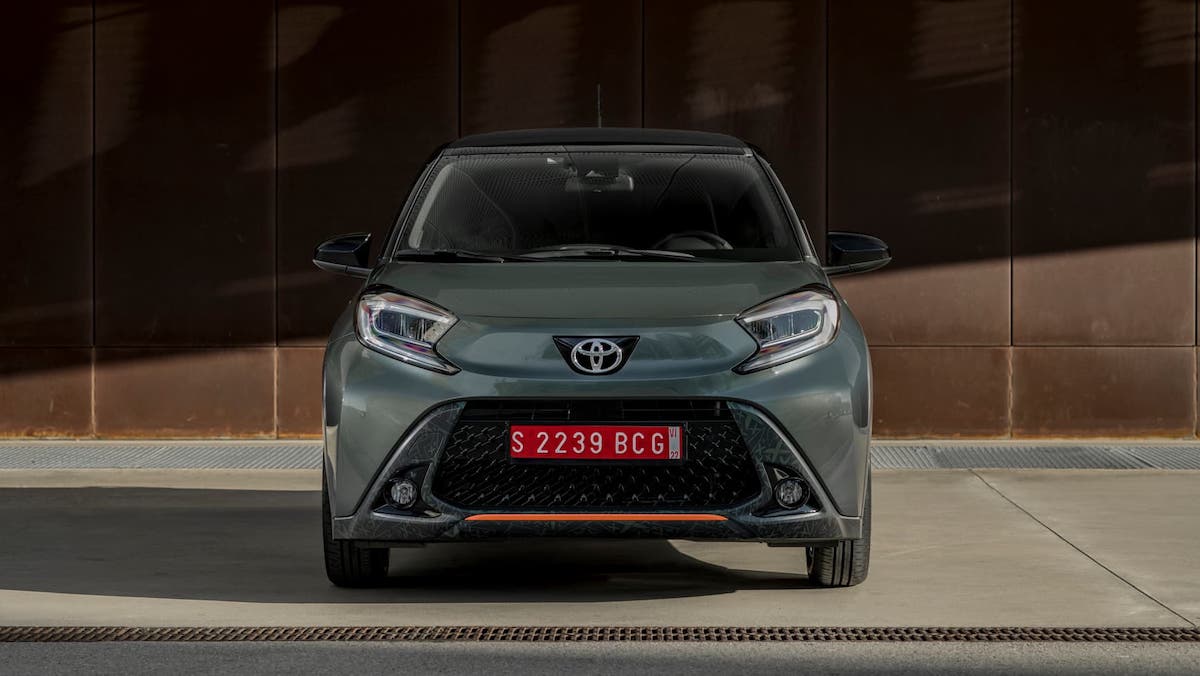 It’s a fun little thing, the Aygo X, particularly in Cardamom Green Limited Edition spec with the retractable fabric roof. It rides and steers impressively well, too, although the little three-cylinder engine can feel a little gutless at anything above city speeds.

The presence of a manual gearbox can make it enjoyable to drive, but it’s a shame there won’t be a 4WD version to rival Fiat’s joyous Panda 4x4. That could have given the X a little more character—something that’s lacking slightly despite the newly raised suspension and the chunkier styling. 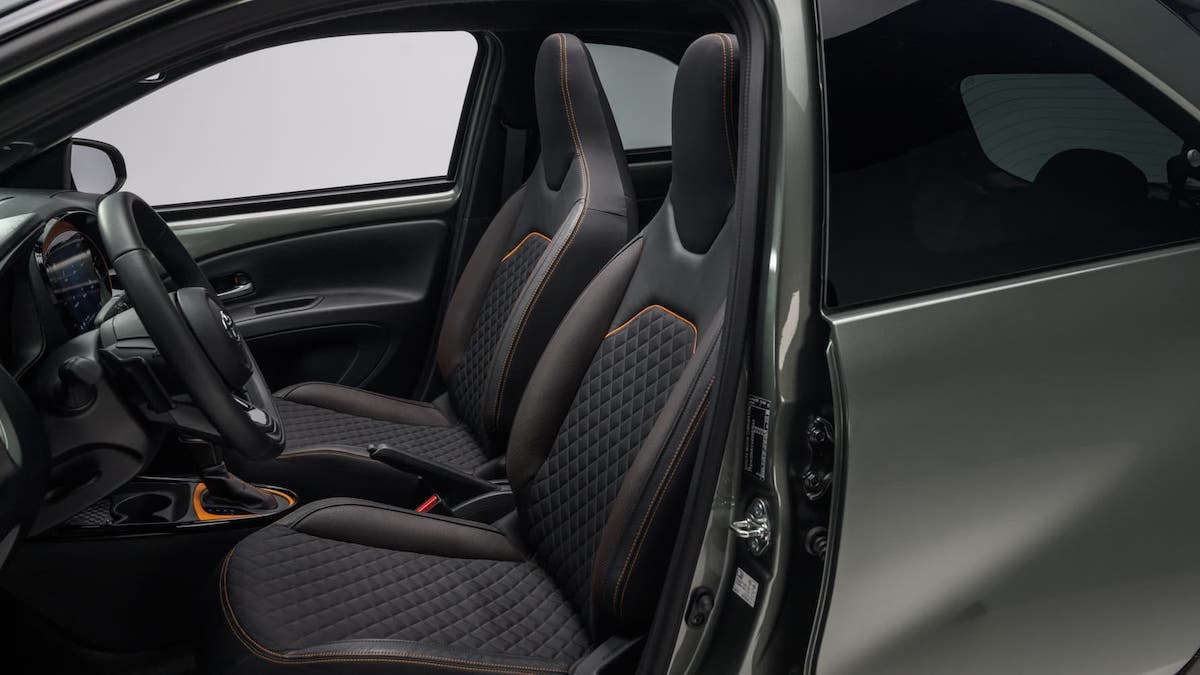 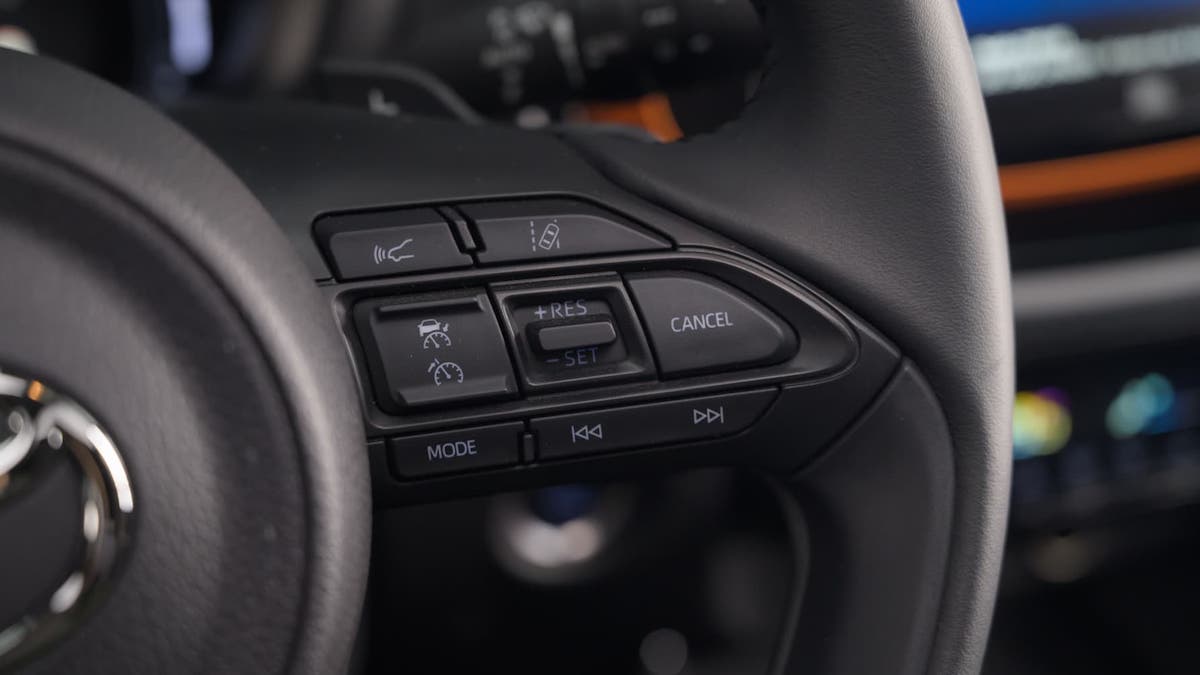 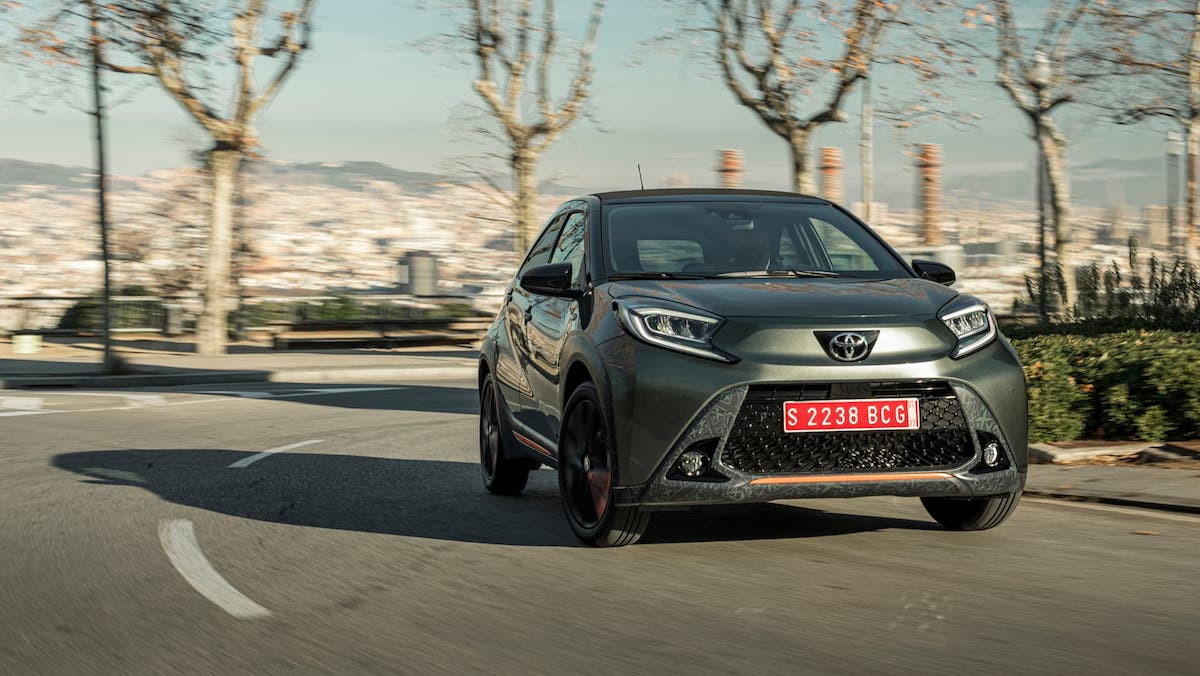 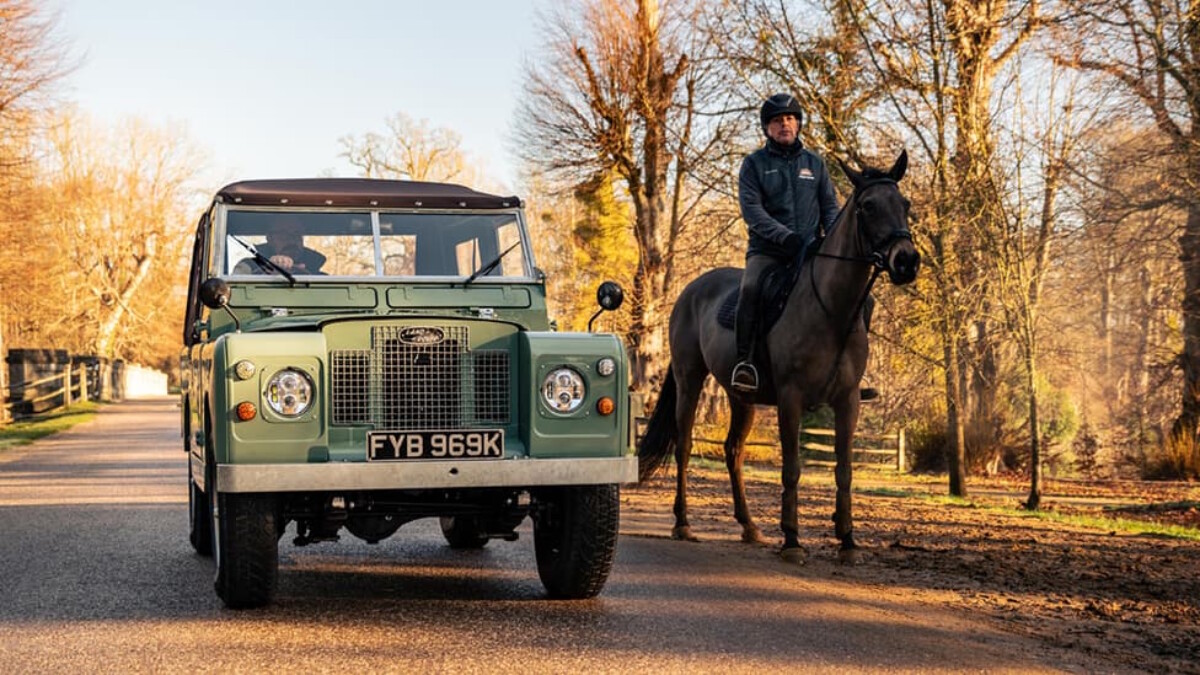 Review: Everrati’s electric Land Rover Series IIA retains the character of the original
View other articles about:
Read the Story →
This article originally appeared on Topgear.com. Minor edits have been made by the TopGear.com.ph editors.
Share:
Retake this Poll
Quiz Results
Share:
Take this Quiz Again
TGP Rating:
/20