And the initial demand for the model seems to prove this
by TopGear.com | May 14, 2022
CAR BRANDS IN THIS ARTICLE

This is the brand-new Ford F-150 Lightning, and it’s a pickup truck that can fit an entire adult under the hood. That’s because it’s an all-electric version of America’s best-selling truck for the last 45 years, and it has a Mega Power Frunk instead of pistons.

In a good year, Ford sells close to a million of its F-Series trucks and turns over around $40 billion (P2.1 trillion) in the process. It’s an absolute titan and crucial not just to Ford’s balance sheet, but the US economy as a whole. All of which means messing with the formula like this, is kind of a big deal...

What is it about electric pickup trucks at the moment?

True, there are suddenly quite a few about, like the new Hummer EV,  the Chevy Silverado EV, and Elon Musk’s stainless-steel wedge, the Tesla Cybertruck. What makes the Ford unique is it looks (by and large), like any other F-150, it’s affordable (prices start from under $40,000 or less than P2.1 million), and it’s ready. The four-ton Hummer is $100,000+ (over P5.2 million), and the Chevy doesn’t arrive until next year. Ford had to turn the tap off at 200,000 reservations, over a year’s worth of production, because it didn’t want things spiraling out of control and customers having to wait years for delivery. 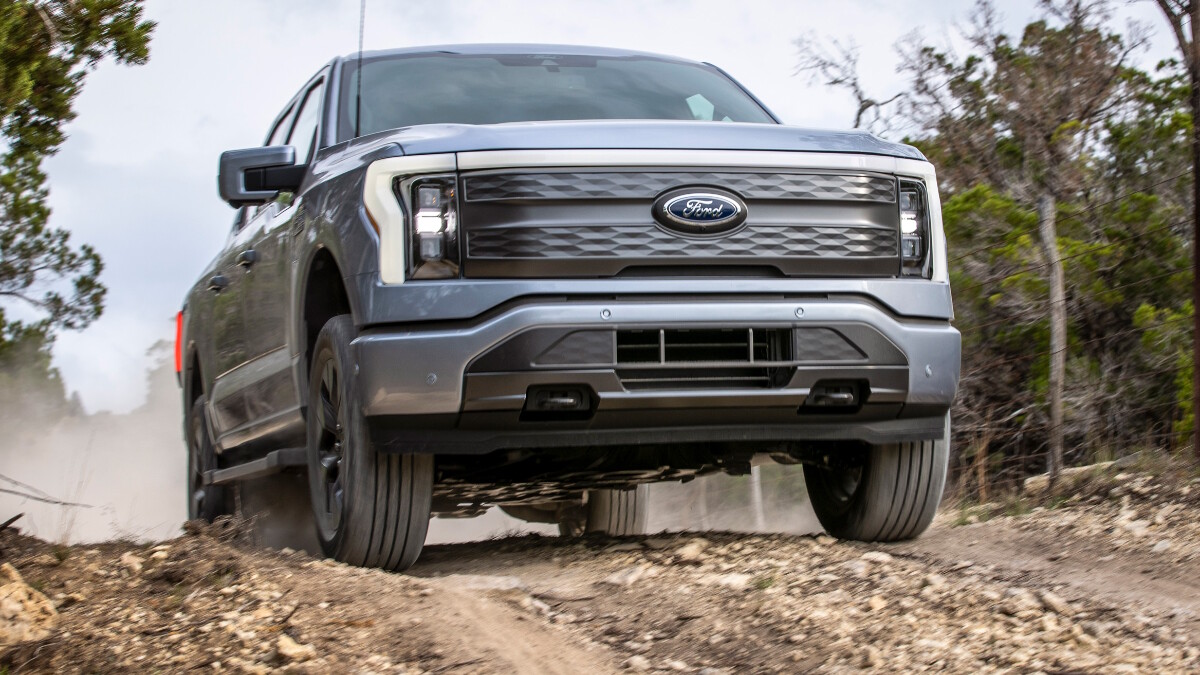 Problem is, dazzling Silicon Valley types tired of waiting for their nonexistent Cybertruck to be delivered is the easy part...tempting Ford’s core audience over to an EV is going to be trickier. Darren Palmer, VP for the electric vehicle programs tells a lovely story about asking some grizzled Texan truck lovers what kind of animal an electric truck would be. “A chihuahua.” Okay, what drink would it be? “Pink champagne.”

He then proceeds to distract them by talking about the new F-150 Raptor before rattling off the specs of one more exciting future model. They get even more amped, then he tells them that’s the EV. “Cue half an hour of shouting, no way, you’re lying, disbelief,” Palmer recalls.

So the challenge is clear: This is a car with a shot at changing opinions on EVs across America. If it does, the floodgates could open, for Ford and other manufacturers of electric vehicles. Ford is calling this the most important car it’s launched since the Model T. They might be right.

Give us those ‘unbelievable’ specs, then? 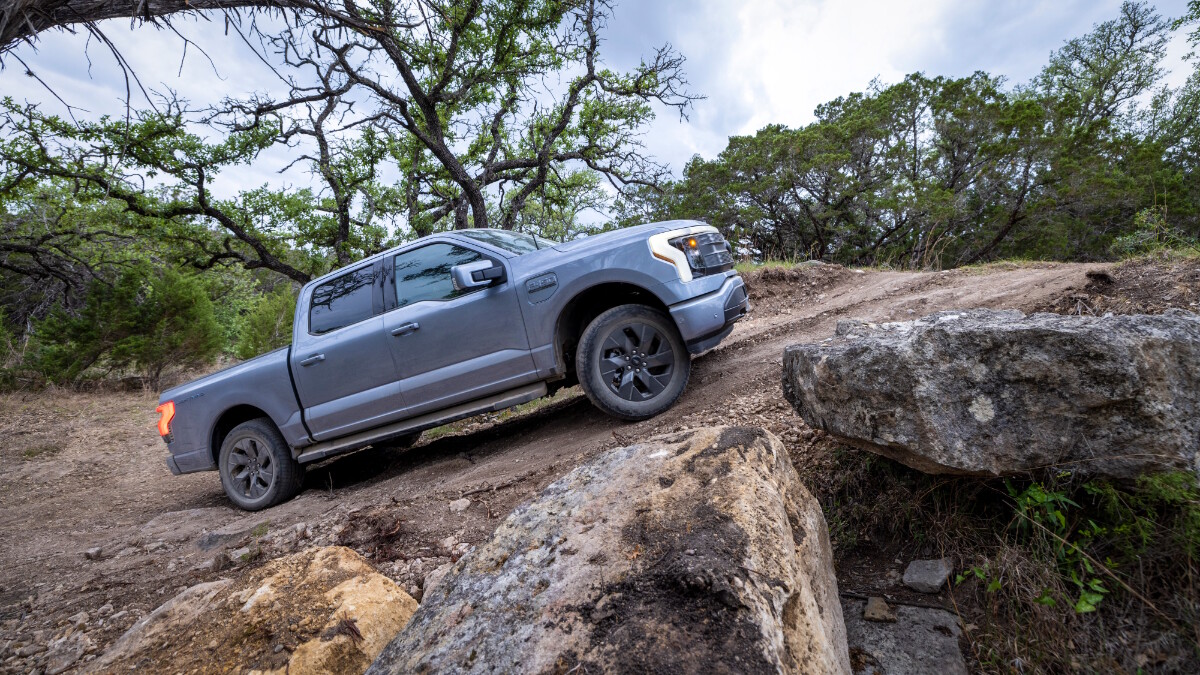 There are two models to choose from: the entry-level version with a 98kWh battery, 446hp, and a 370km range, or the extended range model we drove with a mammoth 131kWh battery (removable from below with just eight bolts), 572hp, and a 515km range, except on the blingy top-spec Platinum variant where the range drops to 480km because of all the kit, an abattoir’s worth of leather, and less slippery 22-inch wheels.

Both versions produce 1,050Nm of torque, and the faster one will do 0-60mph (97kph) in 4.3sec. That’s just bonkers, sports-car pace from something the size of a small planet. Make no mistake, this is an enormous vehicle—the length of a long-wheelbase Merc S-Class...plus another 60cm, and it weighs the best part of three tons. Driving one of these in the UK would feel like a double decker bus, but in Texas, where everything is supersized, it just fits.

Find a non-Tesla rapid charger (we discovered most Walmarts had a bank of 350kW Electrify America chargers installed), and while charging speeds are capped at 150kW, that’s enough for 15% to 100% in 41 mins. Get Ford’s Charge Station Pro installed at your house and it’ll charge up the extended battery version in about eight hours, and turn your truck into a power station in the event of a blackout—a regular occurrence in parts of the US—feeding energy back into your house to keep the lights and all your other electrics on for up to three days, or 10 days if you ration the power. All hail the apocalypse-proof car.

On (and off) the road 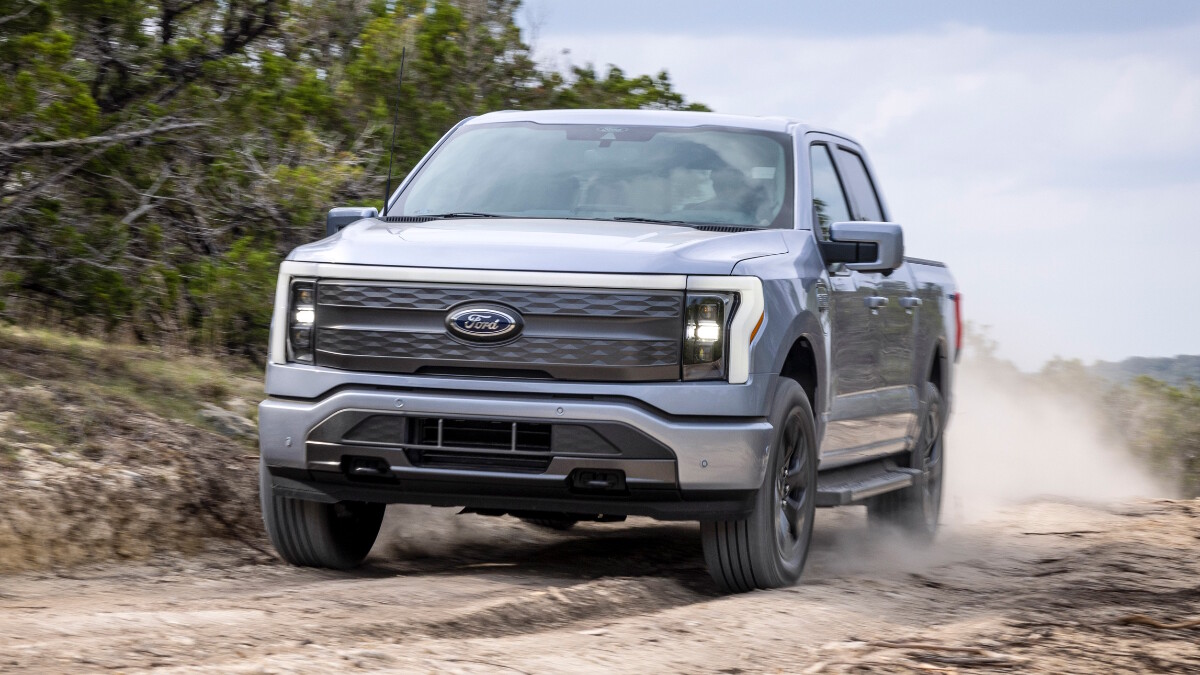 It might accelerate like a sports car, but it doesn’t drive like one. Surprise, surprise, ey? The first thing you notice is wind noise: There’s a fair bit of it, which is to be expected when you’re trying to push a barn door through soupy air, there’s also some shudder through the chassis when you hit a bump or a crack, and the suspension clearly has a lot on its plate keeping all that mass in check. As a result, the ride is floaty on gentle undulations, then when you hit a compression, you really feel the weight.

MORE ON FORD:
How much bigger is the Equator Sport over the current Ford Territory?
5 Surprising things about the Ford Territory Titanium+

How does it cope with bends?

Corners are interesting. On the plus side, there’s now newly designed independent rear suspension, which means the back end doesn’t pogo and skip around when you hit a mid-turn bump, but we found ourselves feeling sorry for the outside front tire bearing the brunt of the forces. Fortunately, they don’t have many corners in America, so the key is to settle in, take your time, get your cruise on, and enjoy the silence, smoothness, and oiled precision with which it barrels down the road. As a way to traverse America’s largely flat and featureless interstates, it’s a premium experience—so much so that you forget you’re in a pickup at all.

Sounds quite sedate given the power available...

Well, you may look at that headline-grabbing 0-60mph time and assume this is some sort of tire-chewing monster truck, but its character is far more subdued. It wants to be driven with a calm hand and a steady foot—and after an initial poke of the throttle to establish that, yes, it can gather a lot of momentum in not much time at all, you’ll only call upon full power on a slip road or for a swift overtake. We found using the one-pedal high-regen mode takes the stress out of stop-start traffic, but on the highway, you want to switch it off and coast along, making the most of all that momentum and maximizing the range. 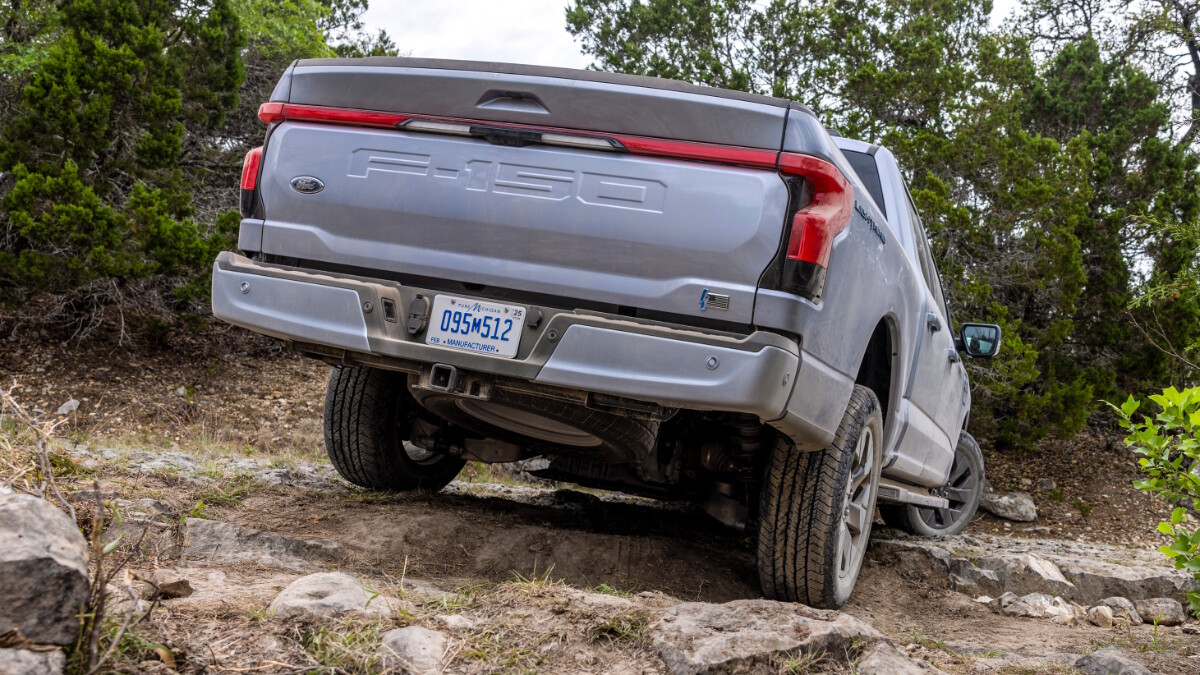 Unsurprisingly, with four-wheel drive, a boat load of torque, and a locking rear diff, it’s handy off-road, too. Thing is, if you just want to get the job done—to scale a mountain or escape a muddy car park—it’s more than capable, but if off-roading is your hobby, you’ll want something that offers more mechanical interaction with the process. It’s also quite good at pulling things, which is something that’s a huge priority to the Texans we met. Total towing capacity, if you get the big battery, is 4.5 tons. If that means little to you, put it this way —we pulled a large speedboat on a trailer. We also pulled an Airstream caravan, and had to double-check they were actually attached. 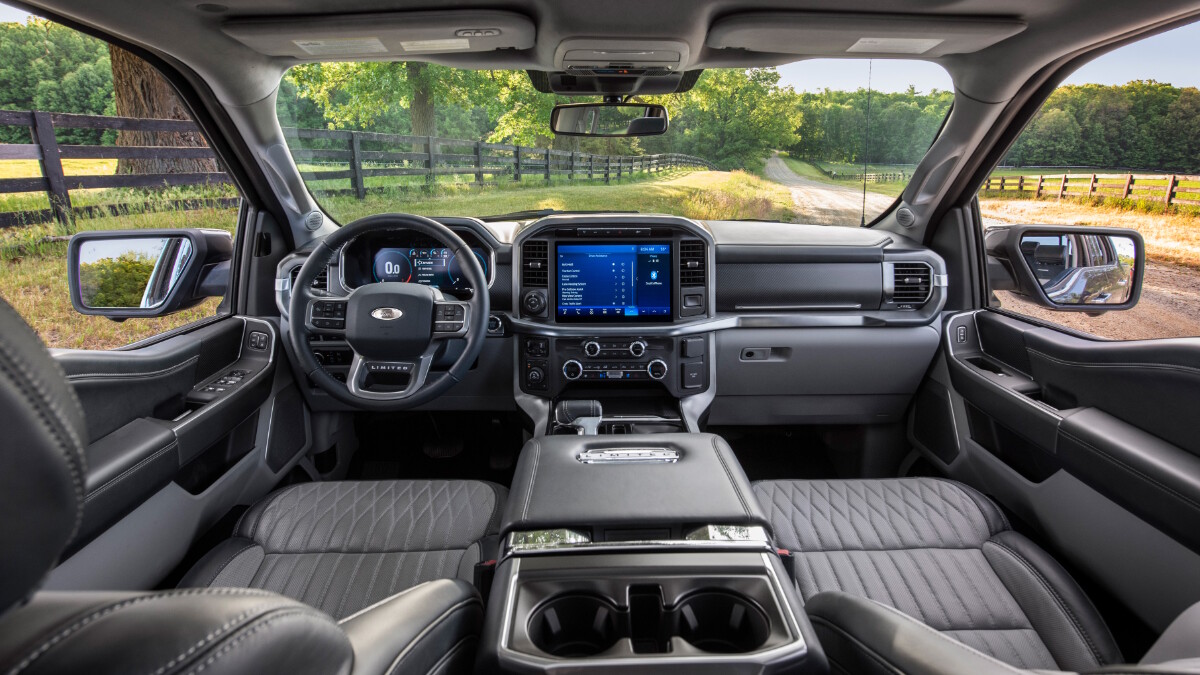 The F-150’s interior is vast. Wide comfy front seats—heated and cooled, with a massage function in the Platinum model—sit on either side of a chucky center console. Got some time to kill? Hit a button and the gear lever folds out the way, letting you unfurl the center armrest into a massive flat space—for your laptop, lunch, a spot of tap dancing...whatever you fancy. There are cupholders and cubby holes everywhere, two gloveboxes, extra storage under the rear bench, which is surrounded by acres of leg and head space. Basically, it’s the ultimate work truck/fun bus...and we haven’t even got to the frunk and the bed.

On the top two trim levels (Lariat and Platinum), you get the same 15.5-inch screen as the Mustang Mach-E—whereas on the lower two (Pro and XLT) you get a 12-inch landscape display mounted above physical controls for the audio and air-con. It’s actually the latter that’s more satisfying to use, although for wow factor, the big screen walks it. Special mention to the 18-speaker B&O sound system standard on Platinum—it’s outrageous, but then the Platinum starts at $90,000 (P4,7 million), although you can get the more workmanlike Pro with the smaller battery, which is a bargain at $40,000. 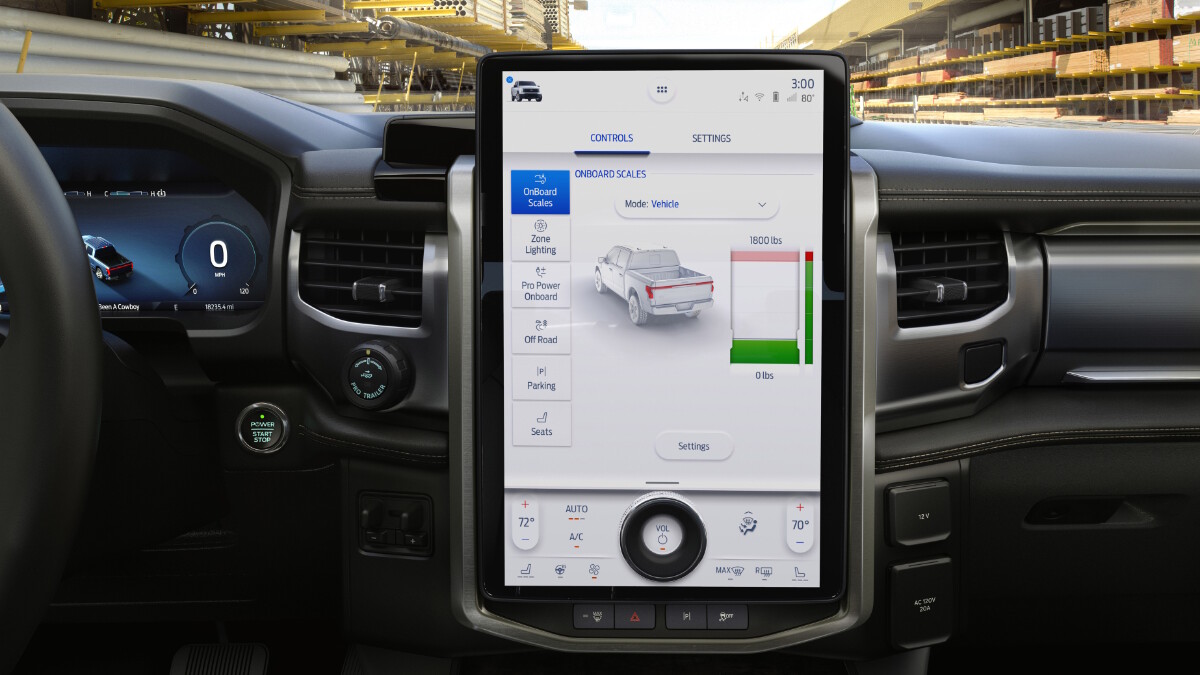 Now for the fun stuff. The Mega Power Frunk—yes that’s it’s real name, sigh—offers an extra 400 liters (more than a VW Golf’s cargo area) of locked storage where an engine would normally be, and opens up on the click of a key fob like some giant oyster. Apparently, for such a simple idea, it was a complete pain to engineer and meet safety standards, ensuring it doesn’t fling open at the wrong moment.

NEED TO KNOW FOR CAR OWNERS:
LTO extends registration validity of vehicles with plates ending in 5
Everything you need to get your LTO registration in order

Around the back, the tailgate lowers electrically, and raises again when you click the keyfob or lift it slightly. Keep it down and it’s littered with features—a step that pulls out of it and a slide-out bannister to hold onto, rulers molded into the plastic, holes for woodwork clamps, a bottle opener...the list goes on (we’ve tried it out in the PH-spec F-150 Diesel Lariat—watch our quick demo here). Round the front, you can fill your frunk with ice cubes because it has a drain hole in the bottom. If you’ve ever been to a beer and beef-fuelled tailgating party in the US, you’ll realize that’s a fairly major selling point. 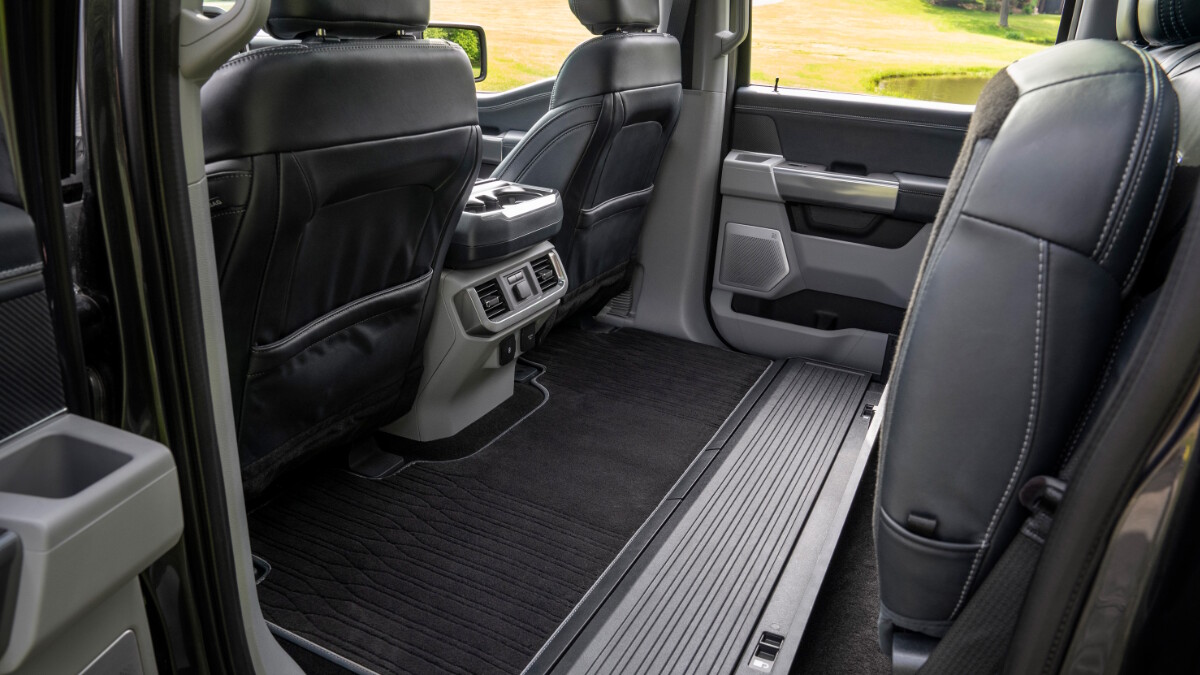 On top of that, the F-150 Lightning is a massive power brick on wheels. Order it with the Pro Power Onboard and you get six USB ports and no fewer than 11 proper plug sockets—four 120V sockets in the frunk, two more in the cabin, another four in the bed alongside a 240V outlet—enough to charge another electric car at 7kW. Drive an EV? Got a friend with an F-150 Lightning? You’ll never be stranded again. 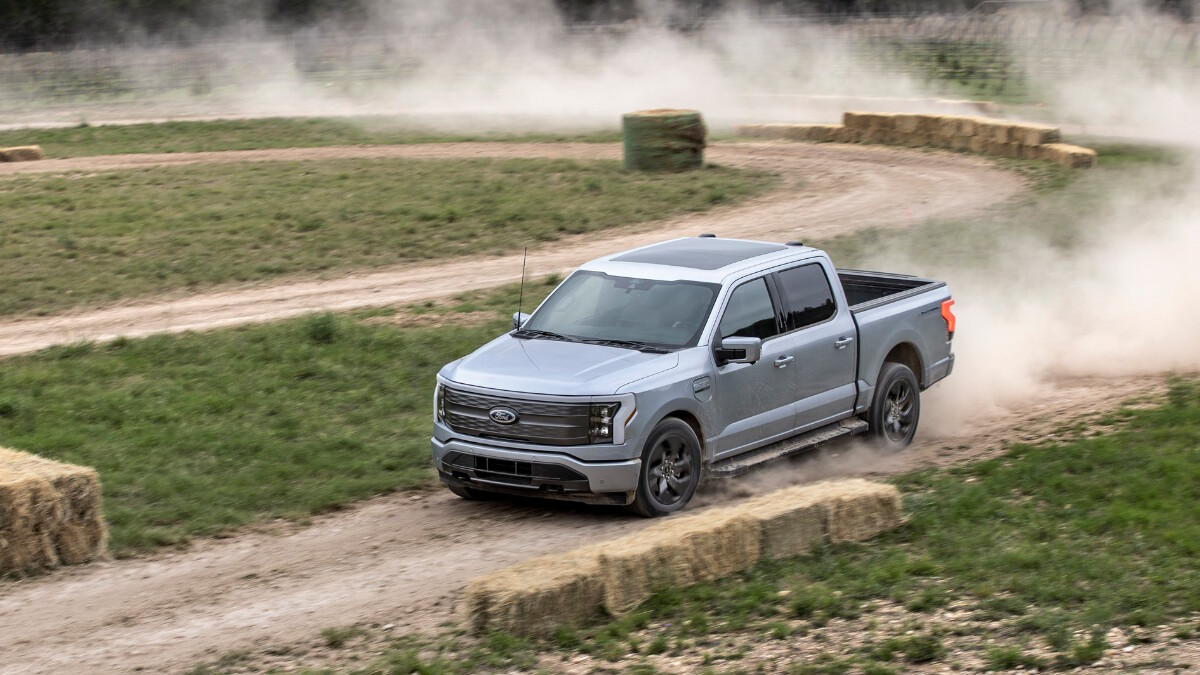 Is America ready for the electric car? Yes. And no. The public charging infrastructure in the US, as in the UK, needs a lot of attention especially given the bigger distances between towns, but if you can home-charge, that’s half the battle won. What we discovered was for every EV skeptic, there was someone whose head was turned by how relatively cheap (amid spiraling ‘gas’ prices) the Lightning was to charge, or how useful it is, or the performance figures. If ever there’s an EV capable of shifting American attitudes, it’s this one right here.

It looks familiar, it goes like a muscle car when you stomp on it, and it’s full of brilliant practical touches and features that will either solve a problem in your life, or at least give you something interesting to talk about over the garden fence. All things considered, it’s a better truck than the standard F-150, and hats off to Ford for getting the price down to near parity with the combustion model. The mission was to remove all the excuses for an F-150 customer not to buy the electric one, and the carmaker has done a remarkable job.

If you can get your head around the 300-mile range, America—we’d make the switch. And the early signs are good with the first year and a half of production sold out and reservations on hold to give them a chance to fulfil. existing orders. Over to you, Tesla. 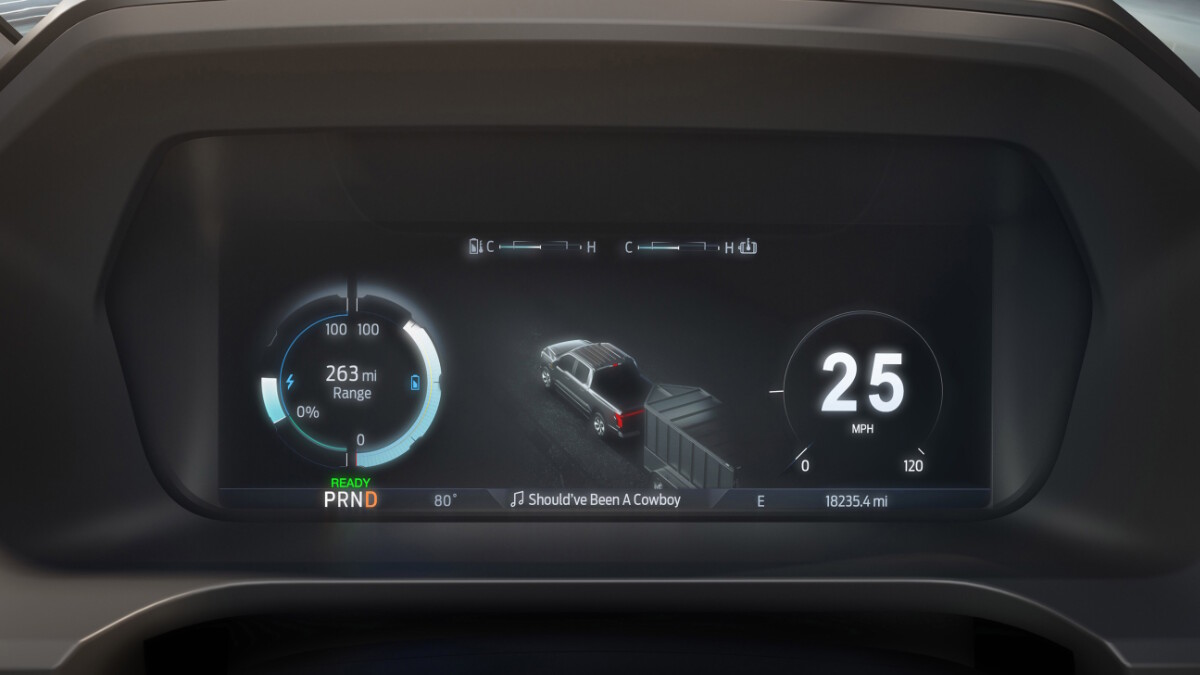 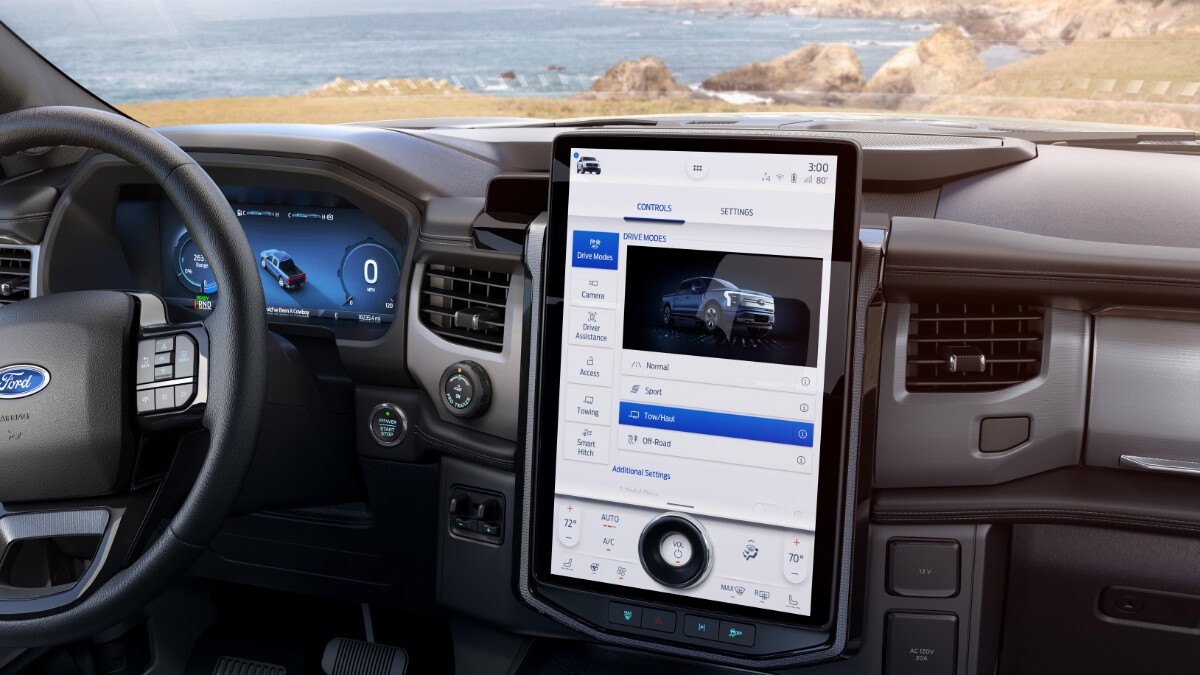 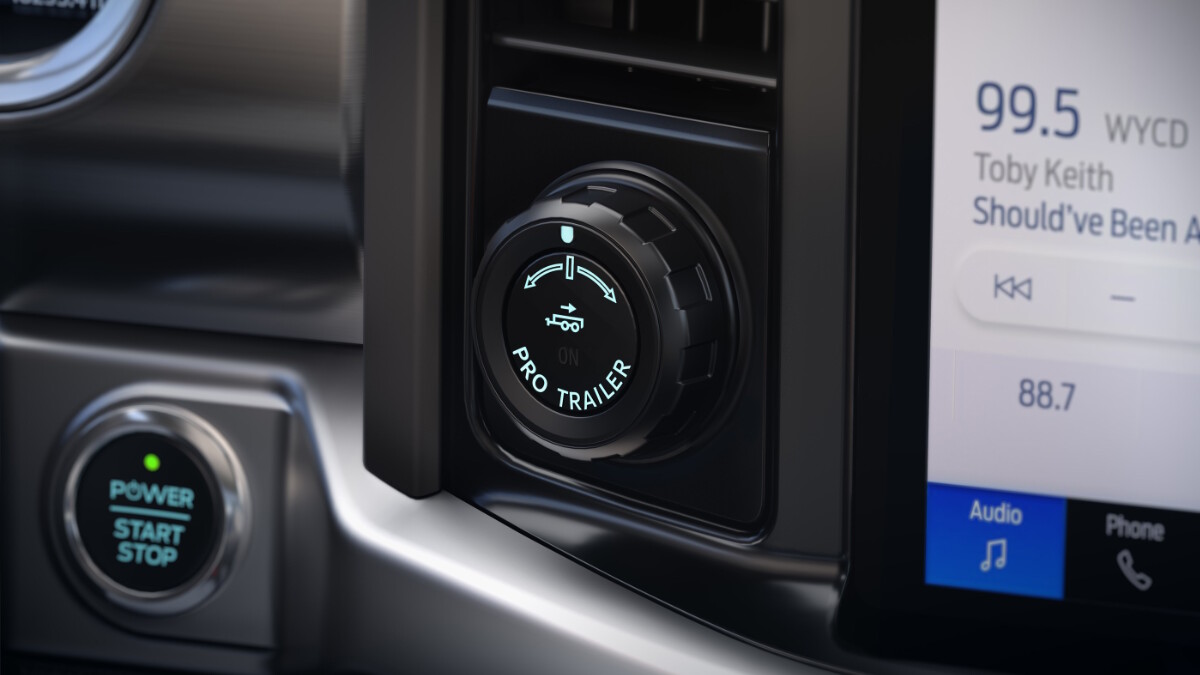 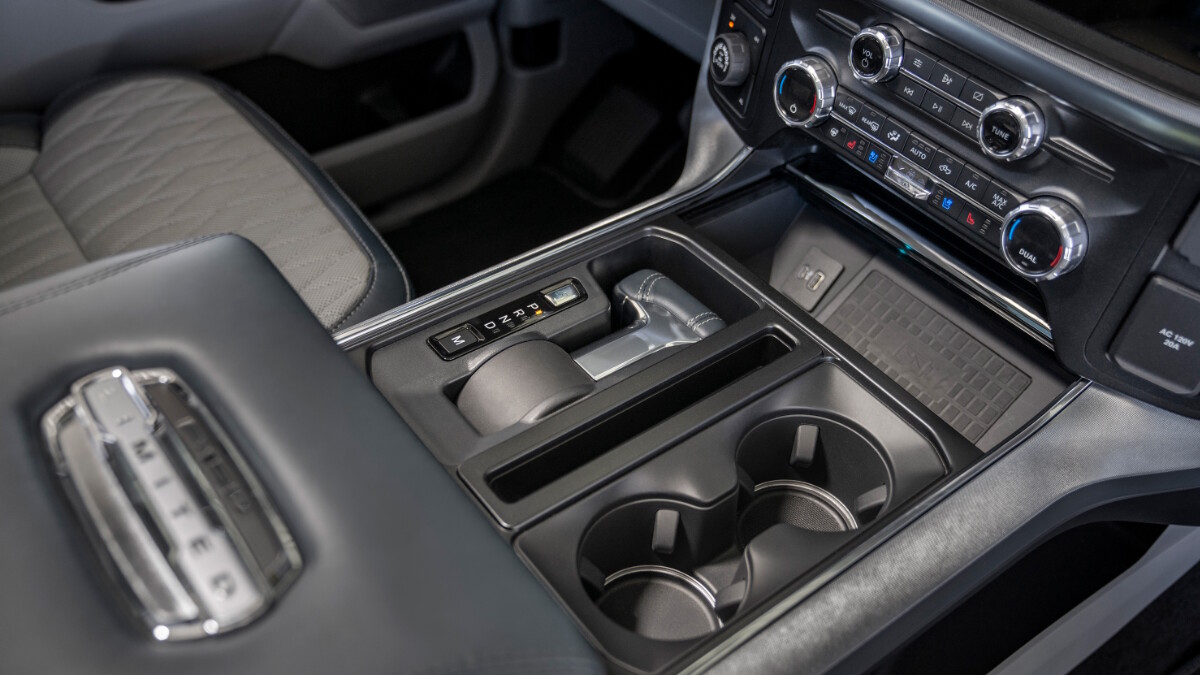 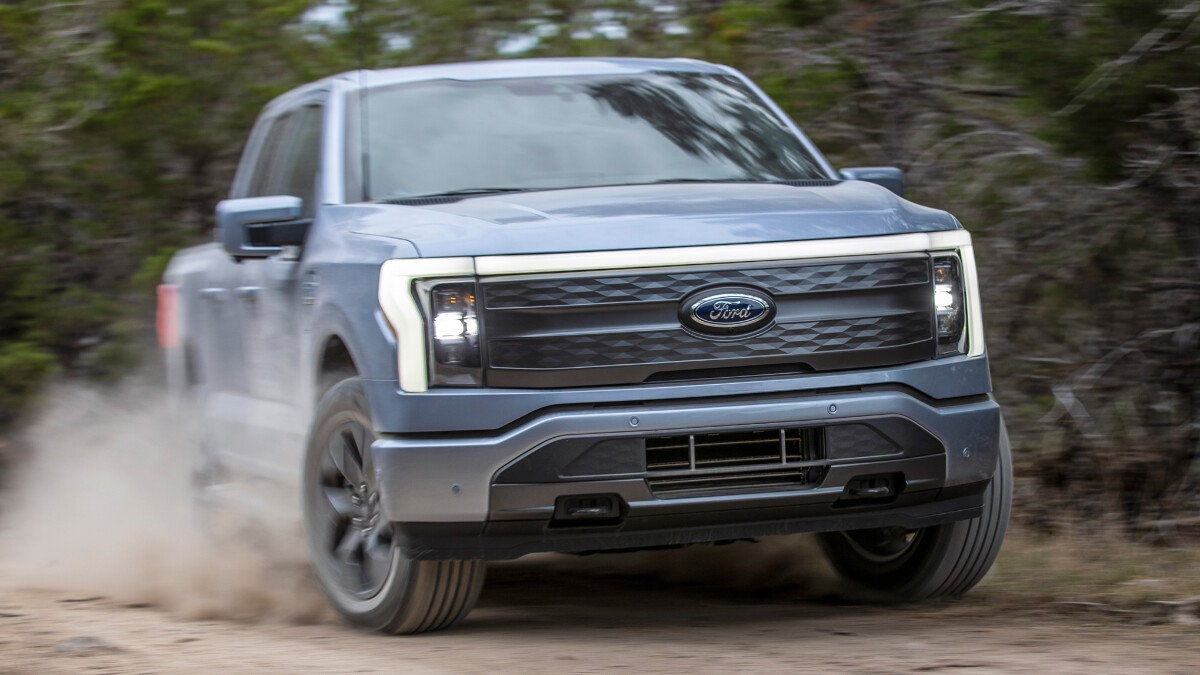 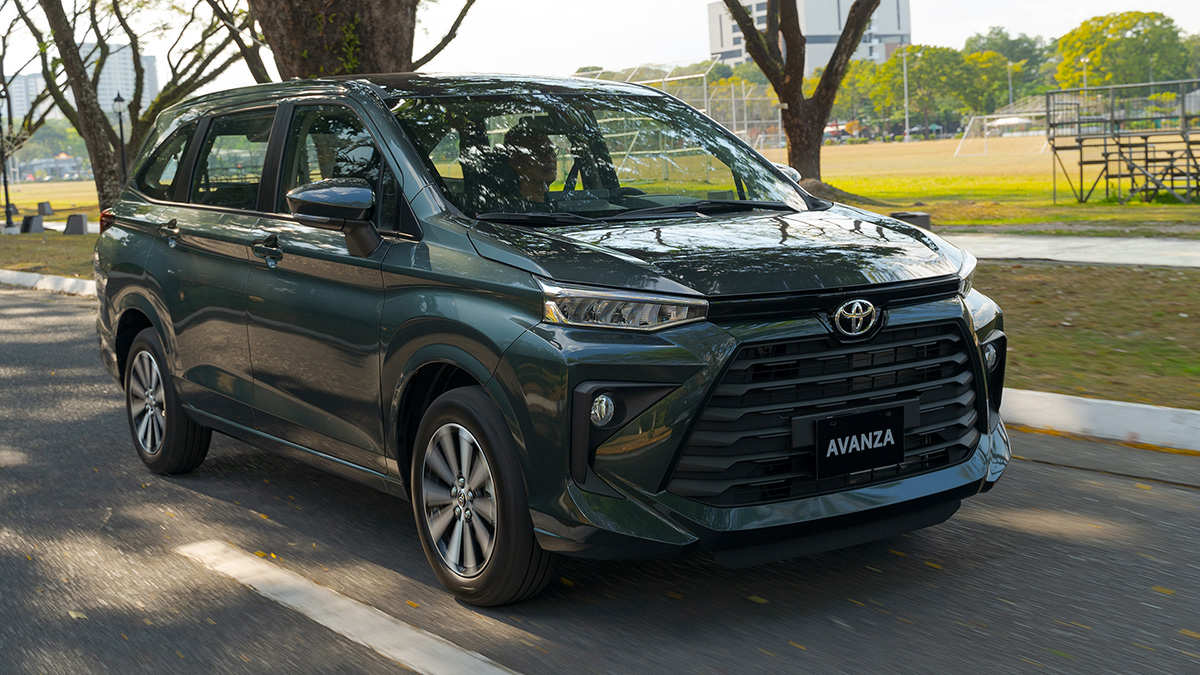 Review: 2022 Toyota Avanza 1.5 G CVT
View other articles about:
Read the Story →
This article originally appeared on Topgear.com. Minor edits have been made by the TopGear.com.ph editors.
Share:
Retake this Poll
Quiz Results
Share:
Take this Quiz Again
TGP Rating:
/20