Is there more to its attention-grabbing appearance?
by Paulo Rafael Subido | Aug 1, 2011
CAR BRANDS IN THIS ARTICLE 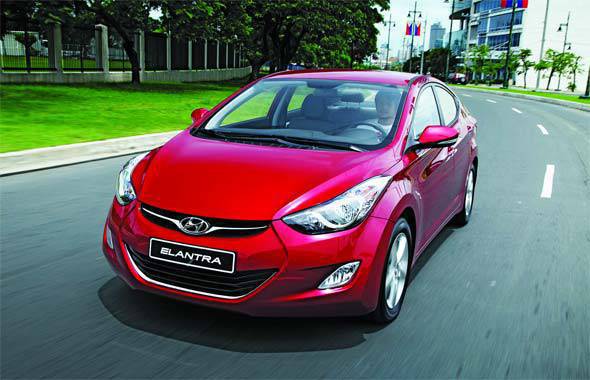 Folks will crowd around it. Bystanders on the street will stare at it. And fellow motorists will crane their necks (risking an accident) to get a better look. Countless acquaintances will also pester you to no end upon finding out that you drive one, wanting to know how well it handles and what features it has. Should you purchase the all-new Hyundai Elantra, I guarantee that you will experience all of the above on a daily basis, at least until a cooler car comes along.

For a while, I couldn't understand just what all the hype surrounding this car was about. I figured that the whole Hyundai-looks-so-different-now bit would be over already. True, the Tucson, the Sonata and the Accent all look groundbreaking and modern--and the Elantra looks every bit like them. Show me something new, then? While wondering what all the fuss was about, I realized that the Elantra is the newest entry into the highly competitive compact-car category--a territory known as the stomping ground of the Mitsubishi Lancer, the Honda Civic, the Toyota Corolla and the Ford Focus. Each of these models has already cemented its name into the automotive consciousness, but this year there really is nothing new being offered by the Japanese (and lone American) brands. In fact, the arrival of the all-new Civic has been pushed to 2012 because of the tsunami that hit Japan in March 2011. The almost ruthless timing of the Elantra's launch by local distributor Hyundai Asia Resources at the 2011 Manila International Auto Show was a masterstroke. A compact 'it' car was revealed when the market badly needed one. Good move, Hyundai.

Unlike the Tucson and the Accent, the choices in surface materials are much nicer here. Surfaces are no longer susceptible to scratches, and we must say that the overall look and quality of the massive dashboard will get folks excited. The feel of the switches and knobs, as well as the placement of the controls, are all ergonomically sound. Even the steering-wheel-mounted buttons won't be pressed accidentally. The layout is that good. There is also a surplus of storage pockets and cupholders throughout the interior. Plugging in an iPod, MP3 player or USB drive won't be a hassle either, thanks to all the ports being located in a covered binnacle ahead of the shift lever. We must also commend whoever designed the functional and stylish aircon controls.

So the Elantra is flashy inside and out, but does it have the meat to back up its appearance? With the 1.8-liter engine mated to a six-speed CVT, we have to say yes to that. The DOHC powerplant that belts out 148hp and 179Nm is very eager to get the chassis moving. Even small blips on the throttle make necks snap backward. Progressively get up to speed and the refined CVT delivers power to the wheels with barely any shift shock. The same effect holds true even if you mash the accelerator. Meanwhile, stopping power is taken care of by disc brakes on all four corners.

The Elantra is no doubt quick on its feet because of its potent engine and lightweight chassis. However, its lightness has its own share of drawbacks. The Elantra feels like a feather when driving in a straight line or when tackling corners aggressively. The electronically-assisted power steering requires almost no effort from the driver at all, and the brakes are boosted in such a way that eliminates any feedback. The only indication of how fast you are going or how hard you are taking a corner is the blurry scenery. We hate to say it, but the driving experience is very disconnected from the road--at least when attempting to get the most out of the chassis.

Light weight is good, as long as suspension settings, steering feedback and overall road feel have been adjusted accordingly. The Elantra can use some work in these areas because at the moment, the total package doesn't inspire too much confidence. I suppose we are used to the road-grabbing prowess of the likes of the Lancer and the Civic--infinitely tossable cars that do not feel very scary even when being pushed to the limits of adhesion.

But you know what? We are just being critical with the new kid on the block. In the urban setting, the Elantra handles itself just fine. In fact, it is one of the most comfortable cars available. It is also competitively priced and jam-packed with convenience features. This may only be the fifth-generation Elantra, but it is quickly gaining ground on the established players. The new guard has arrived, but we doubt that the older badges will give way to this sedan so easily. It's a great time to buy a car.

Manual control: Chevrolet Cruze vs Mitsubishi Lancer EX vs Nissan Sentra 200
View other articles about:
Read the Story →
This article originally appeared on Topgear.com. Minor edits have been made by the TopGear.com.ph editors.
Share:
Retake this Poll
Quiz Results
Share:
Take this Quiz Again
TGP Rating:
/20