The overlooked subcompact hatchback
by Niky Tamayo | Nov 24, 2014
CAR BRANDS IN THIS ARTICLE 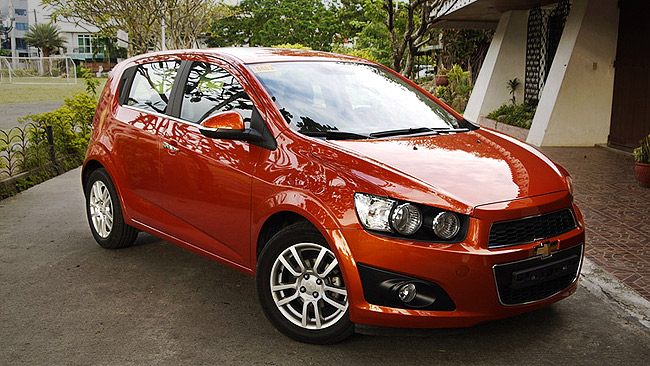 The subcompact class is getting mighty crowded nowadays. And it's easy for good contenders to go relatively unnoticed. Such is the fate of the Chevrolet Sonic, overshadowed by newer Japanese subcompacts and that turbocharged pocket rocket from Ford.

But one can't deny this little Chevy has its appeal. Sure, it doesn't quite attain Bumblebee status, with Michael Bay refusing to turn it into an Autobot in his last Transformers train wreck, but it's a handsome little car. The orange paint doesn't hurt, either. 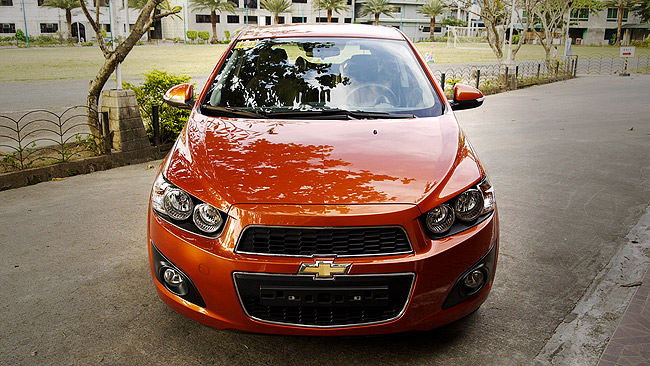 The Sonic's predecessor, the Aveo, was one of the most anonymous-looking cars on the market. Parked side-by-side, the two cars have similar proportions, but the difference is all in the details.

The Sonic has an aggressively square-jawed countenance, with black-rimmed headlights and taillights sitting exposed, without the typical plastic aero cover other brands use. We have to admit that even though it's been out for a while, it's a striking design feature.

The subtle rear spoiler also adds to the sporty looks, as do the attractive alloys. The hidden rear door handles are a fun gimmick the first time you see them, but it can get rather annoying telling people how to open the rear doors. 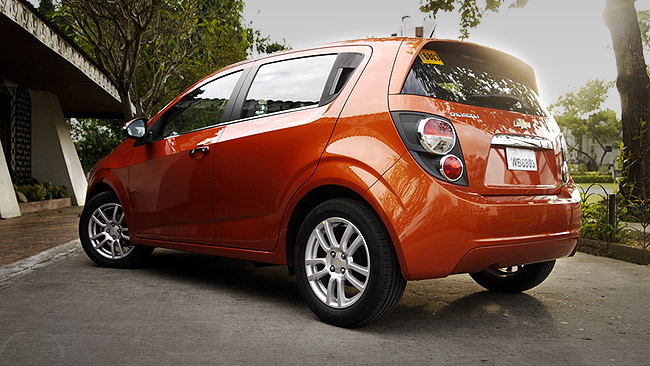 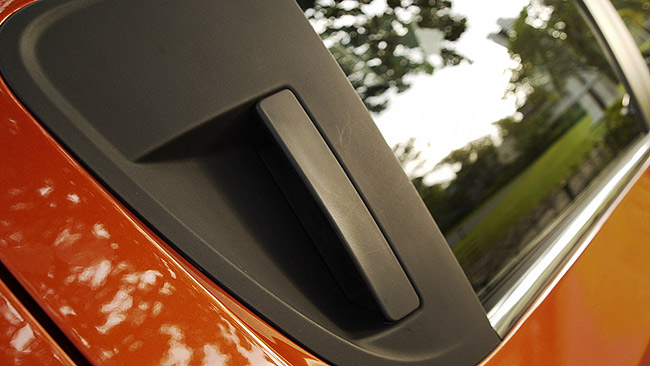 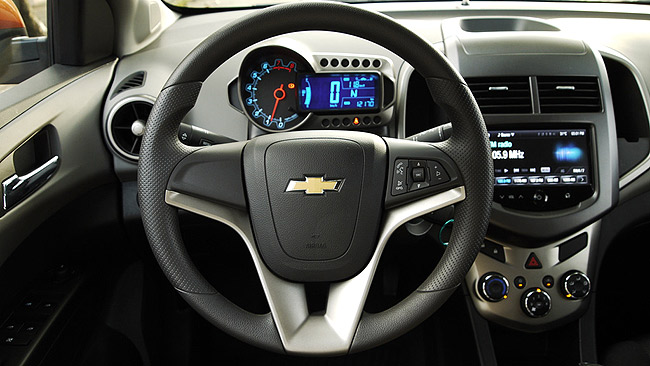 The interior is rendered mostly in hard but sturdy plastics. Chevrolet's obsession with sporty styling sees a minimum of silver brightwork and a lot of nicely textured dark surfaces.

There's the typical motorcycle-type instrument binnacle matched to an analog tachometer with a digital speedometer, and the center console apes the shape of the Colorado's, down to the dashtop bin and split glovebox. The outboard air vents are particularly clever-looking, too.

Rear-seat space is much better than in the Fiesta, but falls short of the Honda Jazz. The rear cargo area seems disappointingly shallow at first glance, but there's a huge underfloor compartment, and there's a spare tire compartment under that. Still, even with all the false flooring removed, the plastic cladding on the sides makes for a very narrow compartment. 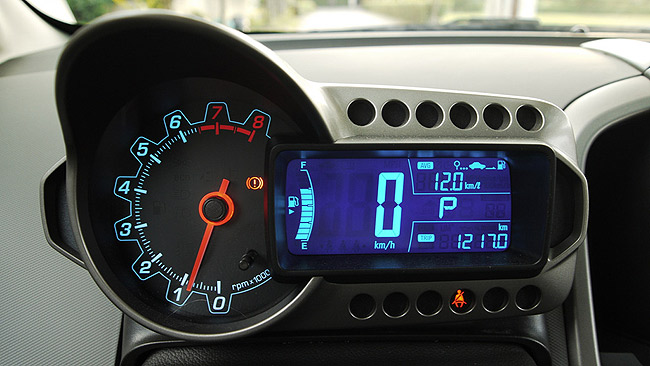 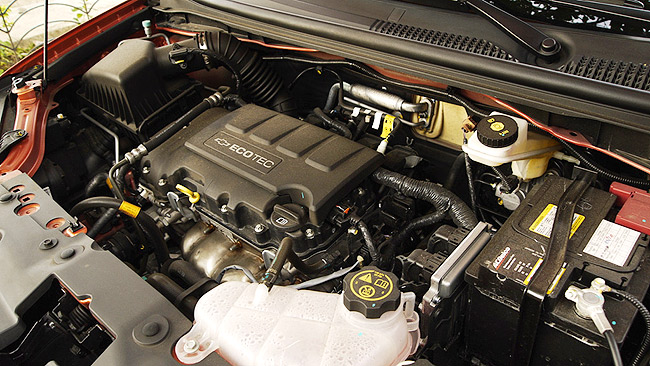 With the Sonic weighing a hundred kilos more than its closest competitors, performance from the 98hp 1.4-liter motor is understandably muted. As with many small Chevy engines, it doesn't sound particularly tuneful, but it pulls cleanly through its power band with no vices. The continuously variable cam-phasing gives it more even power delivery than traditional variable valve timing systems. The six-speed automatic transmission is good, with a responsive manual mode using a lever-mounted rocker switch.

Over the week, we averaged 10-12km/L with the Sonic, more in line with competing 1.5s than 1.3s. On the highway at 80kph, a long sixth gear helps keep revs down, but economy sits at around 18-19km/L, similar to the bigger and more powerful Chevrolet Spin. A 1.5-liter engine would do quite nicely here. 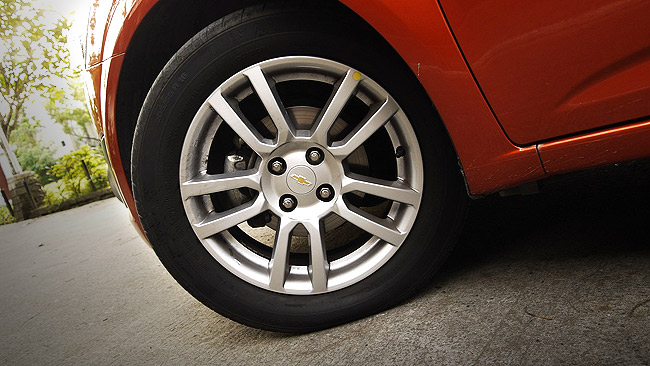 Big 205/55 R16 Continental ContiPremiumContact 2 tires grant the Sonic high handling limits, and the suspension feels tuned to match. The Sonic is secure and stable, and it changes direction with conviction. The steering isn't quite as tactile as the Fiesta's, but it has a nice, meaty feeling to it that makes you wonder how the Sonic would drive with an extra hundred horses.

In more mundane matters, the Sonic impresses. While the ride is a bit stiff due to the sporting setup, it has good sound insulation and tracks exceptionally straight on the highway. And the backing-up screen--with a path-guide visual display showing readouts from the parking sensors--looks straight out of Star Wars. The original one, mind you. 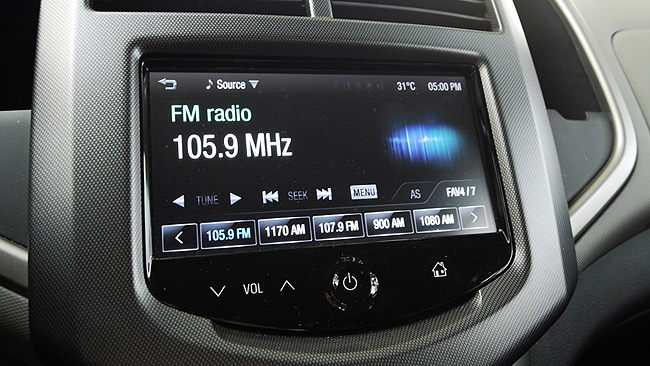 The Sonic comes with Chevy MyLink integration that provides a great-sounding audio system, USB and smartphone integration, and GPS. (At least I think it provides GPS.)

A disembodied female voice informs you that the system is booting up when you first turn on the car, but it's not accessible via the menu. Beyond that, you get keyless entry, front and rear foglamps, and that neat removable floor that compartmentalizes the trunk. 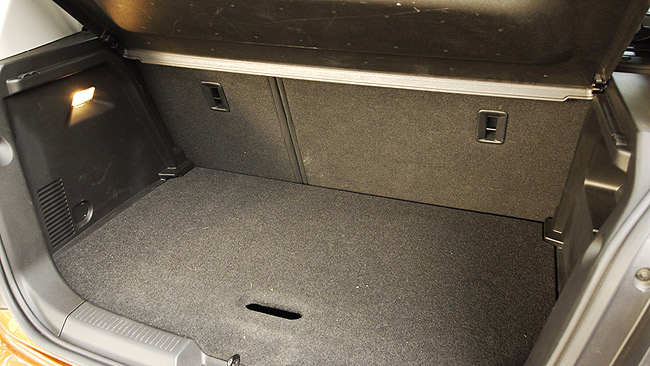 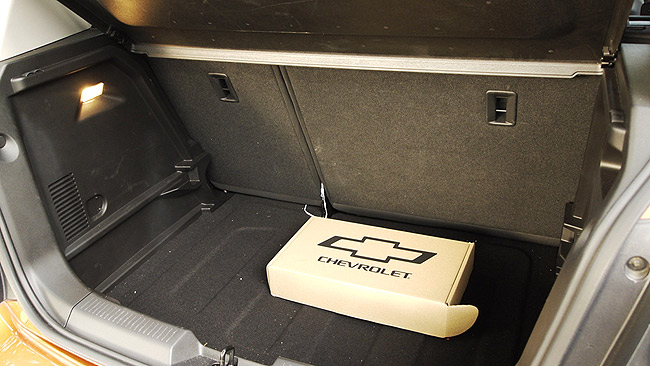 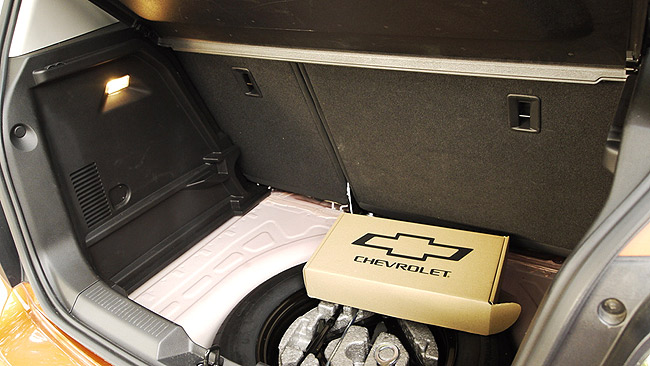 The Sonic LTZ competes in that rarefied air once reserved for the big boys, but now populated with sporty little hatchbacks loaded to the hilt with luxuries. Sadly, Chevy's take on the formula lacks that killer app to raise itself above the competition. Ford has EcoBoost. Honda has its own rather impressive-looking--if rather fiddly--touchscreen system. Hyundai has diesel power. Chevrolet has orange paint and sporty handling (which is great, but not head-and-shoulders above the competition).

That said, the Sonic isn't a bad car. In fact, it's a pretty good one, able to go toe to toe with the class leaders in terms of driving appeal. That's not something you could ever say about the old Aveo. But Chevrolet might want to look at giving the Sonic a little more muscle to tempt a buyer demographic that expects more for that hard-earned money. 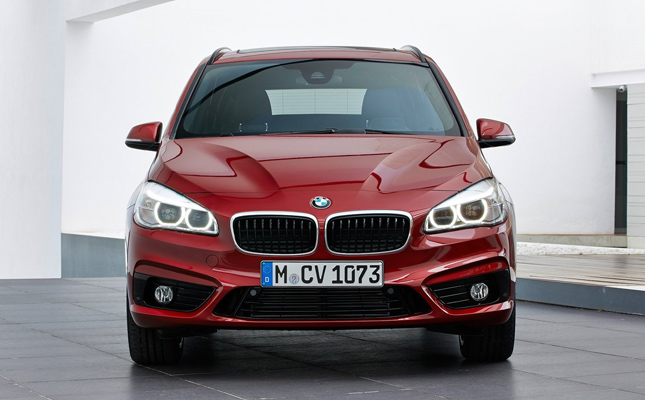 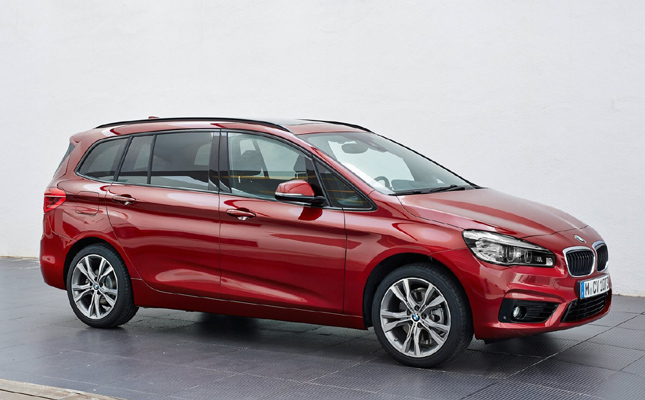 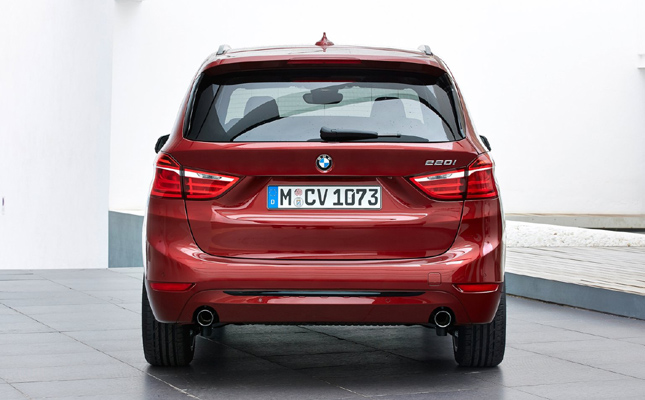 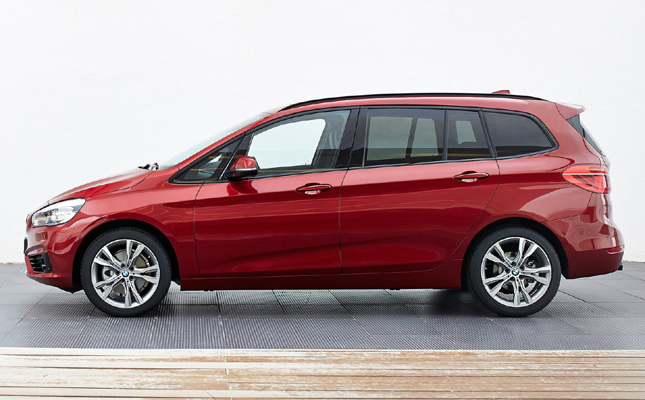 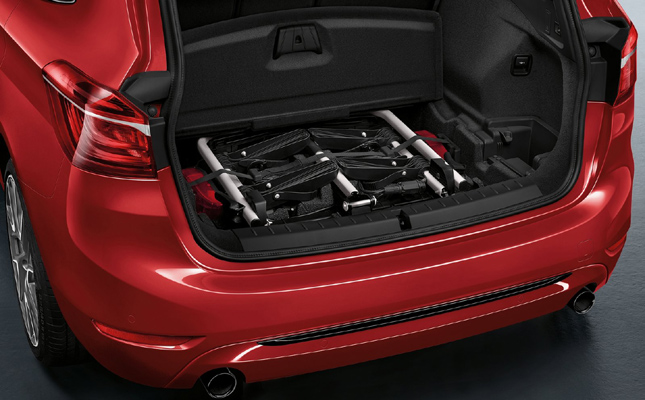