Truly a game-changer
by Niky Tamayo | Jun 16, 2014
CAR BRANDS IN THIS ARTICLE 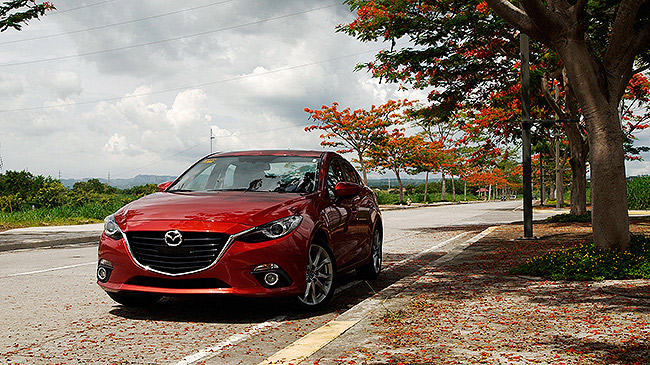 The first Mazda 3 was a revolutionary product that finally matched Mazda's traditionally good driving dynamics to an exterior design that suited the "Zoom-Zoom" tagline. But Mazda's four-speed "ActiveMatic" transmission and that torquey but wheezy 2.0-liter engine it shared with the similarly sporty Ford Focus weren't quite as bleeding-edge. The face-lifted version, with its tighter handling and five-speed automatic, was much better, but an eye-watering P1.3-million price tag made it less enticing than the more modern six-speed Focus. Third time's the charm, though. With an all-new chassis, a Skyactiv engine and a six-speed automatic gearbox, is this 3 finally better than the Ford? Let's find out. 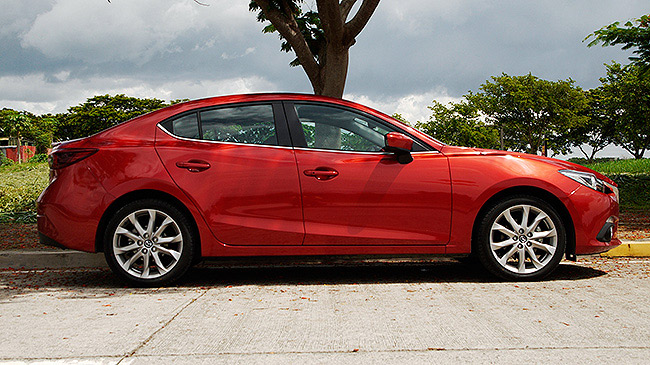 While I loved Mazda's Nagare "wind" concept, it didn't work well on production models. This new Kodo "Soul of Motion" language is much more fitting. The Mazda 3 seems to be the sweet spot for Kodo--with elements in perfect balance with one another. The carved flanks seem a bit chunky in relation to the greenhouse, but there's an exotic air reminiscent of the best Alfa Romeos with the new Mazda 3.

It's a shame the plate number sits in the middle of the grille. An offset holder would do wonders here. Lovely 18-inch wheels round out the sharpest-looking package in the class, bar none. 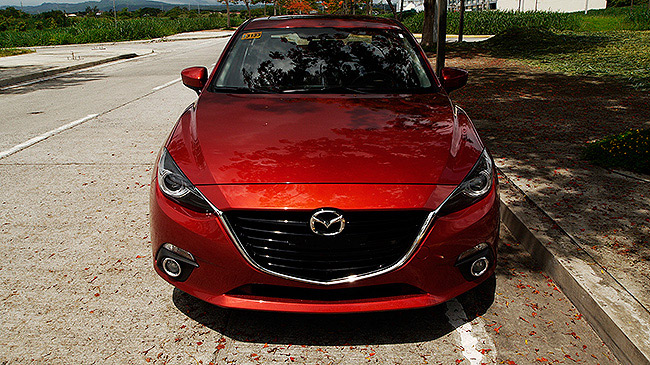 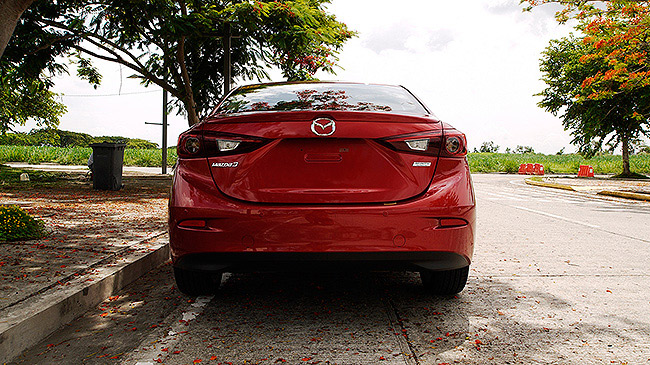 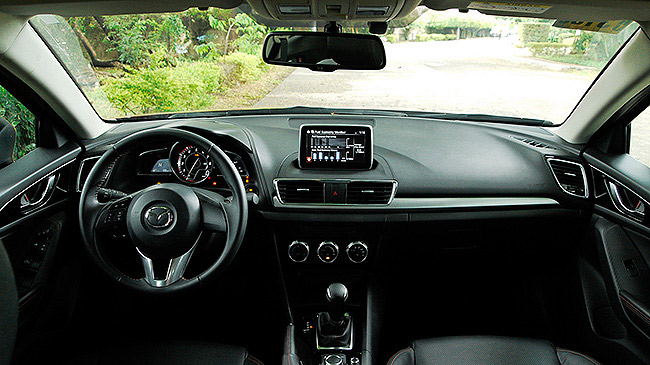 The interior reflects a premium minimalism that's very enticing. A theme exemplified by the single binnacle tachometer, flanked by slim digital displays and topped by a digital head-up speedometer. The tacked-on touchscreen display may look silly at first, but it allows for a low dashboard compared to the rather tall and obstructive one in the previous car.

The dark cabin is livened up by slivers of polished metal and carbon-fiber accents, and red-contrast stitching on leather surfaces and seats. Although space isn't class-leading, there's much more of it than before, and it's never a cause for complaint. 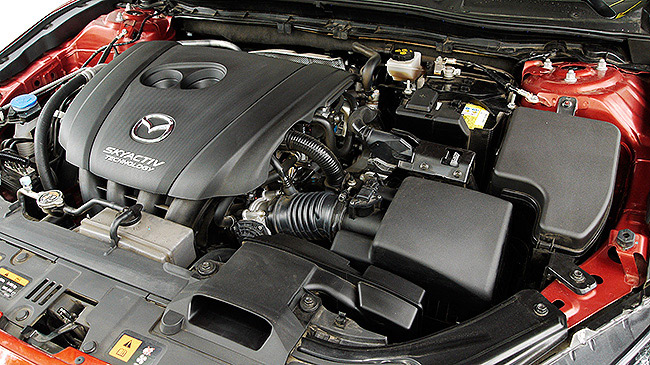 One prominent feature of the cabin is a wide center console, there to cover up space taken by the long-tube header on the new Skyactiv 2.0. With just 155hp, it's not as energetic as the near-170hp GDI motor on the Focus, but it's a responsive motor, and the six-speed auto is smoother and more responsive to requests for manual shifts.

Fuel economy hovers around 20km/L at 80kph, and 18km/L at 100kph. Economy in the city hovers around 7-10 km/L, despite iStop, but the system saves at least 0.5km/L, even in the worst traffic, so it's not worth turning off. 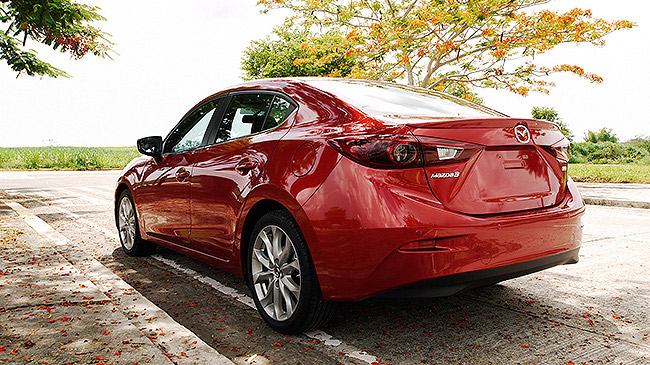 The Mazda 3 is, hands down, the best in class in terms of handling. This is one of those cars that shrink around you the faster and more committed you are. While it could use a tiny bit more high-speed damping, the suspension has a very "European" feel. It's  well-controlled and absorbent, with very little lean and body roll.

Extra-sticky 225/45 R18 Dunlop SP SportMaxx TT tires  provide excellent grip and predictable breakaway, but they're stiff-riding and don't provide as much steering feel or texture as the milder Bridgestone Turanzas on the Mazda 6. 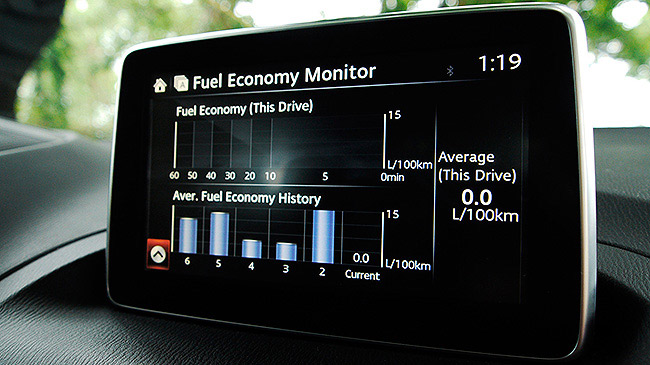 In more sedate everyday driving, you'll have time to enjoy the Mazda 3's other features, like iEloop and iStop. There's also the class-leading cabin insulation and that touchscreen multimedia head unit. While not as comprehensive as some others, the steering-wheel controls and the control puck on the console--which Mazda (sadly) can't call "iDrive"--make it ridiculously easy to navigate, and sound is exceptional for a stock system.

Aside from iStop, the 2.0R gets HIDs, fog lights, leather seats and trim, side airbags and smart keyless entry over the 1.5V. All Mazda 3s get that touchscreen, stability control, push-start, front airbags and GPS navigation. Mazda's maps aren't completely up to date, but that's a minor complaint.

The Mazda 3 is a winner, inside and out. While it still lags behind the class leaders in terms of rear-seat legroom, it's no longer cramped, and what it offers in terms of refinement, toys and driving excitement is hard to beat. Even better, all of that comes as standard, rather than as add-on options that bump the transaction price up into the stratosphere. And with Yojin 3, expect to save even more money down the line. The new Mazda 3 is a game-changer, and this time, the revolution is more than just skin-deep. Should Ford be worried? Everyone should be.

Review: Honda Pilot 3.5 EXL AWD
View other articles about:
Read the Story →
This article originally appeared on Topgear.com. Minor edits have been made by the TopGear.com.ph editors.
Share:
Retake this Poll
Quiz Results
Share:
Take this Quiz Again
TGP Rating:
/20