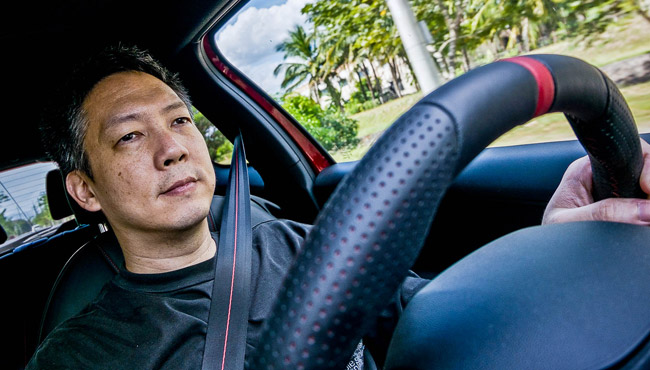 1. He thinks everybody wants to race him on the highway.

2. He will gladly take you to any of the newest, hottest, most glamorous restaurant in the metro...as long as his lowered, stanced, body-kitted ride can get over the establishment's driveway without scraping any part of its underbody.

3. He cuts Saturday date night short and rushes home before midnight like Cinderella because he has to be up at the crack of dawn for a track day.

4. He says a childhood accident has left him partly deaf, and that's why he never hears you when you're reminding him of something...yet has the ability to identify whether a car has four, six, eight or 12 cylinders; if it is normally aspirated or turbocharged; and whether it is Japanese, German or Italian, simply by the sound of its engine note as it drives down a street seven blocks away.

5. He doesn't trust the valet to park the car, so he drops you off at the lobby, where you end up waiting for half an hour while he finds a "safe" parking spot.

6. He can never recall important things like your shoe size, where you had your first date, or your anniversary...but remembers exactly when the next oil change is due, and knows by heart the ideal camber and toe settings for Batangas Racing Circuit and Clark International Speedway. He can also recite his car's Vehicle Identification Number from memory. Backwards.

7. He prefers to stay home in bed on Friday night instead of watching a movie, and complains about a migraine and the onset of the flu...then 10 minutes later, jumps out of bed and rushes out of the house like his pants were on fire, to meet his friend who has just taken delivery of a new car.

8. He complains you take so long deciding what handbag to use, and that it doesn’t matter because they all look exactly the same anyway. And then he says you're blind because you can't tell the difference between all the various Porsche 911 variants. Hello, isn't it so obvious?!

10. He takes forever in the toilet because he's trying to finish the latest issue of Top Gear.

There's one huge reason your car guy is a keeper: Because no matter how jealous you are of his car(s), remember that at least his car(s) won't kiss him back.

Instagram post of the day: Mini wonders what your heart beats for
View other articles about:
Read the Story →
This article originally appeared on Topgear.com. Minor edits have been made by the TopGear.com.ph editors.
Share:
Retake this Poll
Quiz Results
Share:
Take this Quiz Again
TGP Rating:
/20