The best and worst of James Bond's cars

From Aston Martins to tuk-tuks
by TopGear.com | Aug 17, 2017
CAR BRANDS IN THIS ARTICLE 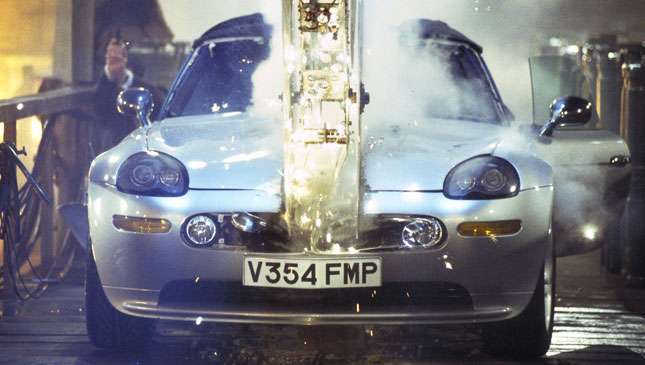 HIT: BMW Z8 – The World Is Not Enough

When the Z8 appeared in 1999’s The World Is Not Enough, the car was fit for James Bond. In case you’ve forgotten, the Z8 was a svelte two-seat RWD roadster that BMW produced in the late '90s until 2003 by a team led by Chris Bangle, with the exterior design by a certain Henrik Fisker (he of the Karma, DB9 and V8 Vantage).

It was a gorgeous retro-styled thing, and certainly had the go to match the show, powered as it was by the E39 M5’s V8 and good for 400hp and a sprint time to 100kph of well under five seconds‚enough to out-drag baddie Renard’s henchpersons.

In Secret Service Q spec, it apparently had titanium armor, a heads-up display and “six beverage holders,” though Q’s assistant—played in this case by John Cleese—didn’t mention much else. He certainly seemed to forget the surface-to-air missile that Bond later uses to take down a helicopter, though the titanium armor didn’t do much to stop a second chopper using a dangly rotary chainsaw to cut the Z8 in half. 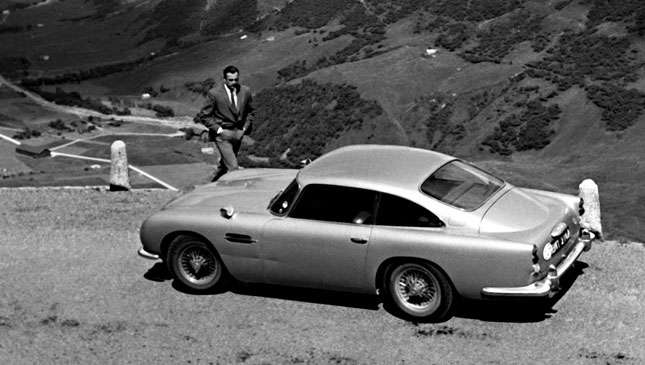 Probably the most famous Bond car of all, the DB5 first made a film appearance with Sean Connery in 1964’s Goldfinger—a grand mix of gentlemanly flash that suited the British Secret Service to a tee. Anyone who had the Corgi toy will remember the gadgets, too: machine guns behind the front indicators, three-way revolving numberplates, a bulletproof shield at the back (suspiciously like a big lump of lead), smokescreen maker, tire-slashing spikes and ejector seat. Proper stuff.

It’s also apparently the fastest DB5 in existence, because when Pierce Brosnan’s Bond drives it in 1995’s GoldenEye, it manages to match a contemporary Ferrari F355 Spider on a twisty mountain road driven by the ever-amusingly named Xenia Onatopp. 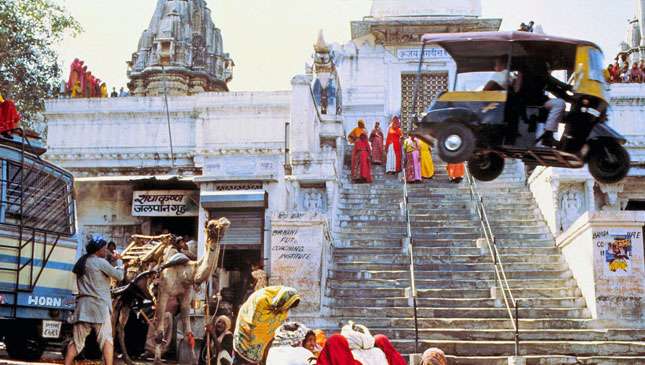 Technically a Bajaj RE, but more commonly known as a tuk-tuk or auto rickshaw, the three-wheeled taxi commandeered by an eyebrow-morphing Roger Moore in Bond’s 13th film outing, Octopussy (1983), turned out to be a bit more than it seemed. Seems like the Brits aren’t the only ones with a Q Branch, or access to sports bike engines. The resulting chase sequence through the streets of Udaipur in India is one of those early '80s tongue-in-cheek sequences that still manages to be both exciting and funny—though it doesn’t half feel dated now. 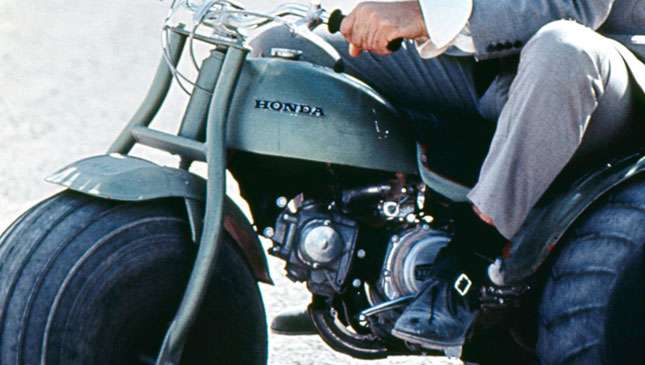 It’s 1971 and Sean Connery’s sixth and final outing as the legendary spy, doing something that involved diamond smuggling, giant lasers and, of course, Ernst Stavro Blofeld and his penchant for fluffy lap cats. But the fact that Blofeld was creating extra Blofeld-alikes using extreme plastic surgery wasn’t the thing we were most interested in. It was the moon buggy chase scene when Bond was escaping from the Willard Whyte Space Labs compound, and the little Honda ATC Bond acquires from his pursuers in the film. First appearing in 1969, it featured three high-flotation balloon tires, an 89cc four-stroke single-cylinder, 7hp, and more character than you could shake a Banana Splits theme tune at (though younger readers may struggle with that reference). 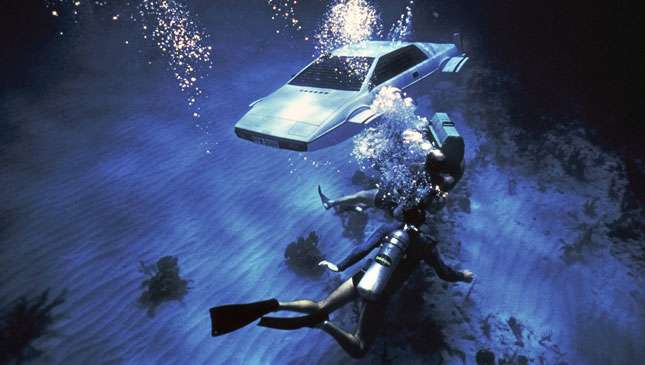 HIT: Lotus Esprit S1 – The Spy Who Loved Me

Another car made iconic by a Bond appearance, the white wedge first appeared in 1977’s The Spy Who Loved Me, featuring the late Sir Roger Moore. Invariably chased about by perennial villain Jaws—he of the stainless-steel dentistry affectation—Bond’s Lotus was unique in that instead of letting water in, as many production Lotuses were prone to at the time, it was actually a fully working submarine with anti-aircraft missiles. The actual vehicle is now owned by Elon Musk—yep, that guy who makes Teslas. 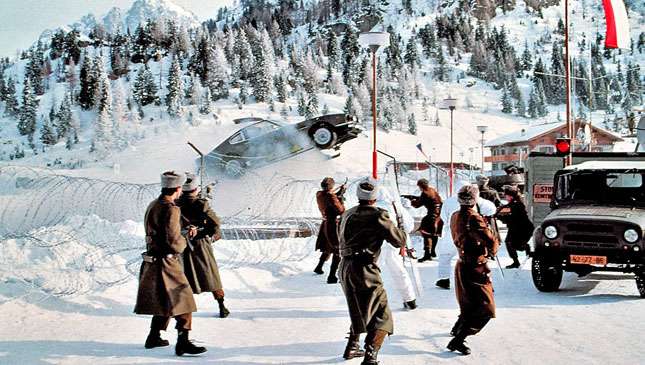 Another Aston for Mr. Bond in 1987, this time a V8 Vantage in The Living Daylights, starring a new-to-the-role Timothy Dalton. The distinctive B-reg started off as a convertible Volante, but then appeared later ‘winterized’ by Q Branch, by the apparent fitting of an especially seamless hardtop, seeing as the number plates were the same. Gadgets included a control panel under the center armrest for the application of such wonders as wheel lasers, missiles—including a head-up targeting system displayed on the windshield—outriggers, pop-out spiked tires, a rocket booster and, somewhat more prosaically, a police radio receiver. The car was also bulletproof, which is probably why it needed the rocket—if all that gear were real, it’d weigh somewhere in the region of 80 million tons.

The V8 Vantage—the original, that is—was hailed in 1977 as ‘Britain’s first supercar’, thanks mainly to its impressive (for the time) 274kph top end. Indeed, it managed 97kph in just 5.3secs, pipping the Ferrari Daytona by a tenth, and did so swaddled in enough leather and veneer to sink a battleship. The motor was a 5.3-liter V8 fitted with high-performance cams, and though early cars used carbs, the ones used for The Living Daylights ran fuel injection. 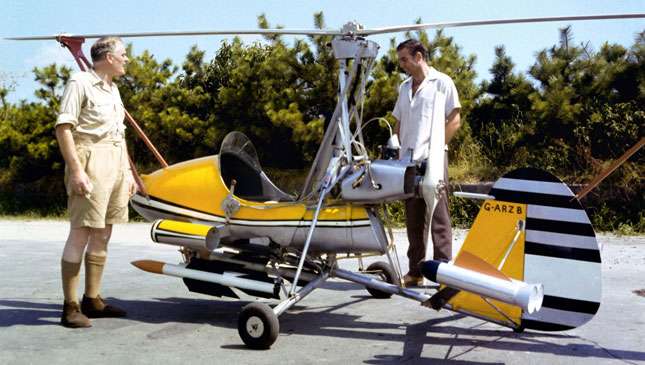 ‘Little Nellie’ starred as Connery’s secret weapon in 1967’s You Only Live Twice, and was actually a real-life Wallis WA-116 Agile autogyro flown by its inventor, Wing Commander Ken Wallis. Basically a shrunken one-man helicopter, Nellie was powered by a 4.3-liter two-stroke engine, and measured just over 11ft, but still managed to pack a decent punch: a pair of machine guns, a pair of rocket launchers with seven rockets each, a sprinkling of air-to-air missiles, two flamethrowers, two smoke bomb things, and a small swarm of parachute mines. 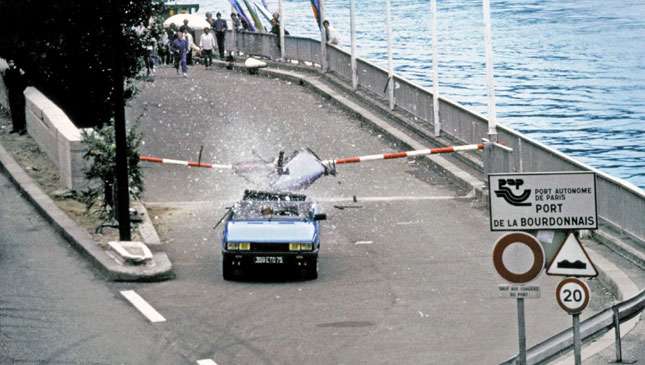 The Renault 11 (the hatchbacked version of the sedan Renault 9) probably doesn’t seem like the ideal car for Bond, seeing as it’s got the appeal of a brown sofa. But when it’s 1985 and you have to chase a very scary woman called May Day (Grace Jones) who has just paraglided from the Eiffel Tower in Paris, a commandeered Renault 11 taxi is apparently just the job. This is the car that became famous for its ability to keep going even after sustaining grievous injury: first the roof gets lopped off as Roger Moore’s Bond drives under a truck, then the rear half of the car gets amputated when it gets hit by another vehicle. 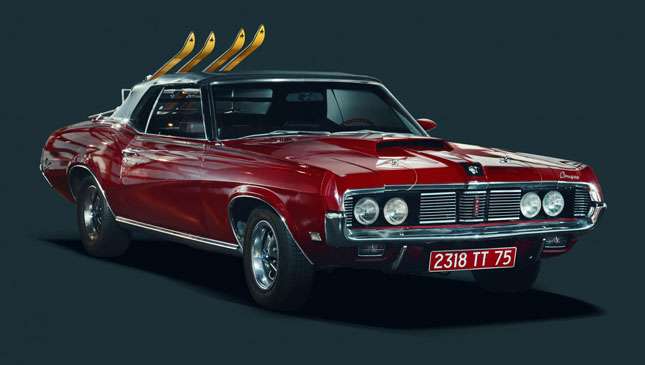 Technically not his car, but that of George Lazenby’s Bond’s future wife, Tracy di Vicenzo (Diana Rigg), the Mercury Cougar XR7 Convertible in 1969’s On Her Majesty’s Secret Service was actually pretty hardcore. It was basically a re-bodied Ford Mustang—Mercury’s take on the popular pony car—kitted out with a performance package, which included a ram air hood scoop, rally wheels, and high-backed bucket seats, as well as a full gauge kit. In fact, Bond never actually revved up the 428 Cobra Jet Ram Air (conservatively estimated to make 335hp—though 400hp was probably nearer the mark), letting Tracy do all the driving. 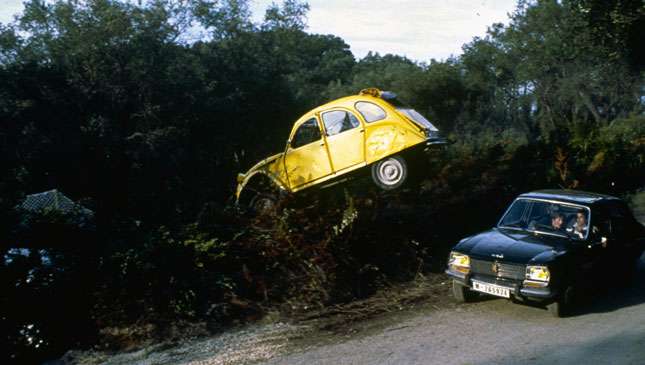 HIT: Citroen 2CV – For Your Eyes Only

What it lacked in gadgets, the Citroen 2CV that starred in For Your Eyes Only in 1981 made up in pluck. As Roger Moore’s Bond attempts to escape baddies in more powerful Peugeot 504s with Melina Havelock (Carole Bouquet) in tow, the little yellow peril manages to stop bullets and drive down the side of mountains without breaking.

Stunt supremo Rémy Julienne decided that the standard 2CV’s 29hp, 602cc twin wouldn’t cut the mustard for stunt duties, and replaced it with a more powerful 1,015cc flat-four from the Citroen GS, making a huge…54hp. It’s also one of the few Bond vehicles that spawned a real-life road-going special edition in the form of a Citroen 2CV in the same yellow paint with ‘007’ logos on the hood, trunk lid, and doors and stuck-on bullet holes. Tasteful. 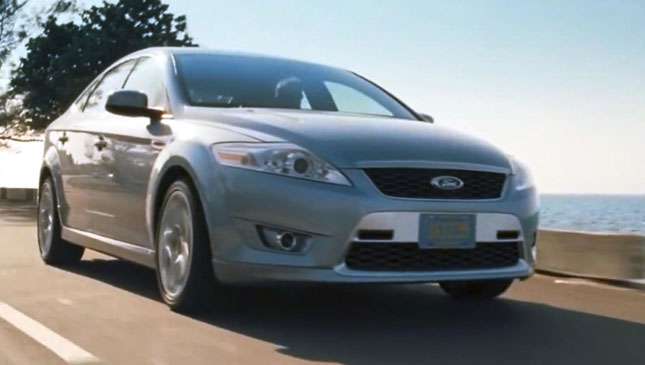 After all the consternation over a ‘blonde Bond’, and going to the trouble of creating a new, back-to-the start narrative for Daniel Craig, you’d have thought poor old craggy-face’s first moment in a car as 007 would’ve come in something more exotic than the then-new Mondeo. And thanks to Ford’s over-lording product placement deal, Jags, Land Rovers, and Volvos are suspiciously prevalent throughout. 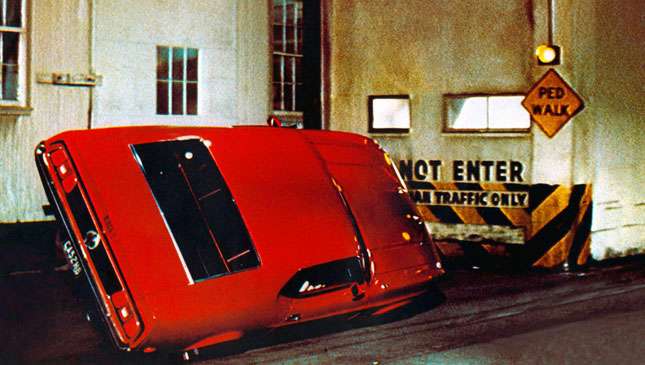 Two crews and two locations were used to shoot the most ambitious stunt in Diamonds Are Forever’s Vegas-based Mustang Mach 1 chase. Unfortunately, when it was stitched together, someone noticed the car drives into the alley on its right wheels, and reappears balanced on the left. Ah. A hilarious, unexplained in-car shot was inserted to show the ‘Stang apparently rotating within the alley, rather than reshooting the trick. 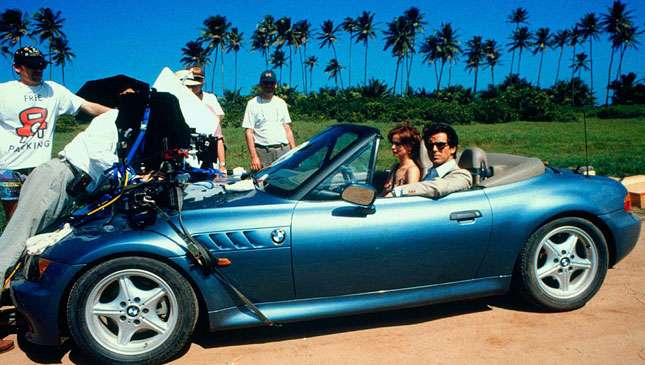 There’s product placement (see the Avis Mondeo), then there’s pretending a car will have a starring role, then giving it a paltry two minutes on screen. GoldenEye’s Z3 purports to hide stinger missiles and a self-destruct system, yet we get glimpses of it bumbling along a dusty track, then it’s traded for a plane. Depressingly, BMW still gained a surge in Z3 deposits after the film’s 1996 release. 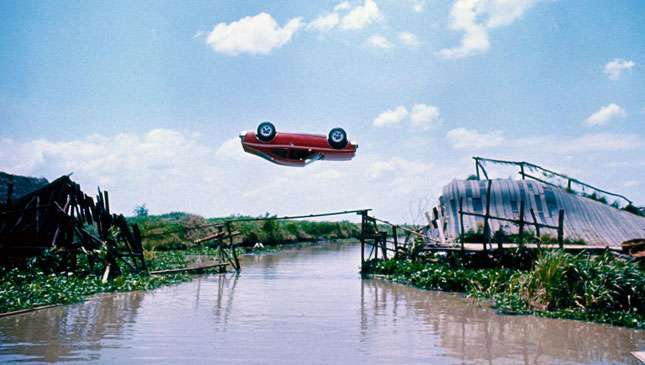 MISS: How to ruin a stunt with a barrel-roll slide whistle

Still considered one of the most difficult, iconic stunts in movie history, two noises totally ruined the incredible barrel-roll sequence in The Man with the Golden Gun. First, Roger Moore’s shocking “Ah sure am, boy” Southerner accent that’s worse than Brosnan’s British impression. The second? A slide-whistle sound effect dubbed over the eye-popping moment his nicked AMC Hornet takes to the Thai sky. 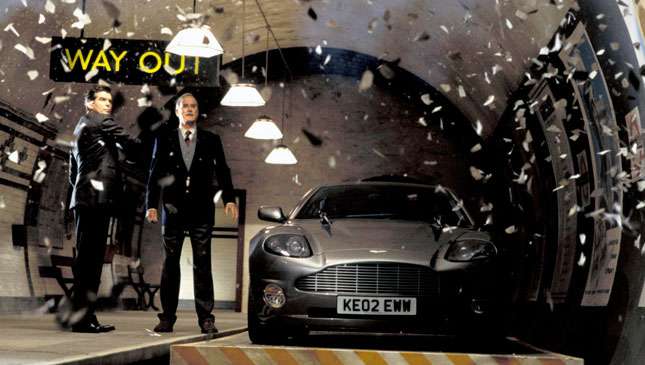 Beyond the giant space laser and Brosnan kite-surfing a tsunami, the most unbelievable offender is the adaptive camo Aston Vanquish, which seemingly disappears. You don’t need MythBusters to prove that’s implausible to the point of insulting. Stick to ejector seats, Q. 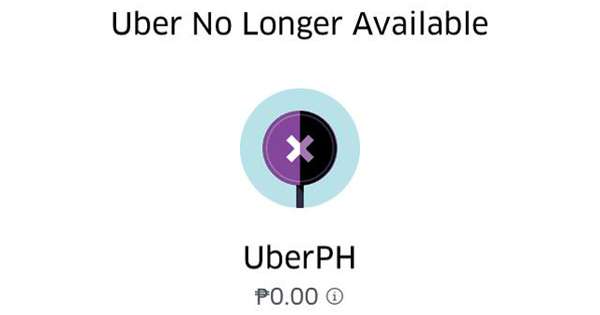 Life without Uber: What day is it?
View other articles about:
Read the Story →
This article originally appeared on Topgear.com. Minor edits have been made by the TopGear.com.ph editors.
Share:
Retake this Poll
Quiz Results
Share:
Take this Quiz Again
TGP Rating:
/20