Sometimes all it takes is an idea whose time has come
by Craig Jamieson | Aug 1, 2020

It is a truth universally acknowledged that a person, in possession of a car, must want the car in front of them to get out of the way. But, as you might know if you’ve ever, say, driven a car on a public road, that’s not the way things tend to go.

You might recall that in 2019, Metro Manila was again in contention for the world’s worst city to drive in (a title it had already bagged the year before), based on data gathered by Waze. In fact, a Bloomberg report in October 2019 stated that it takes five minutes to cover just one kilometer in the metro.

One way to solve congestion, as we’ve discovered, is for a terrible virus to besiege the entire world and force everyone to stay at home. But this has panned out to be a little on the heavy-handed side of things. It has also created a new problem where erstwhile public-transport users are unsurprisingly reticent to share enclosed spaces with strangers, so they’re looking to use personal transport—bicycles, yes, but also their own cars and motorcycles—instead. Now, there’s the very real possibility that post-pandemic traffic will be far worse than the pre-COVID slog.

Before this little contagion came along and sucker-punched society as a whole, businesses and governments were already exploring options like working from home, four-day work weeks, and congestion pricing. The good parts of that sentence have ramped up for the lucky ones who still have secure jobs, work in an industry that allows flexibility, and aren’t currently attached to a ventilator, but a great many workers don’t have the option of working from home.

To finally fix traffic once and for all, we want something new, something avant-garde, something from tech giants who move fast and break things, right? Well... 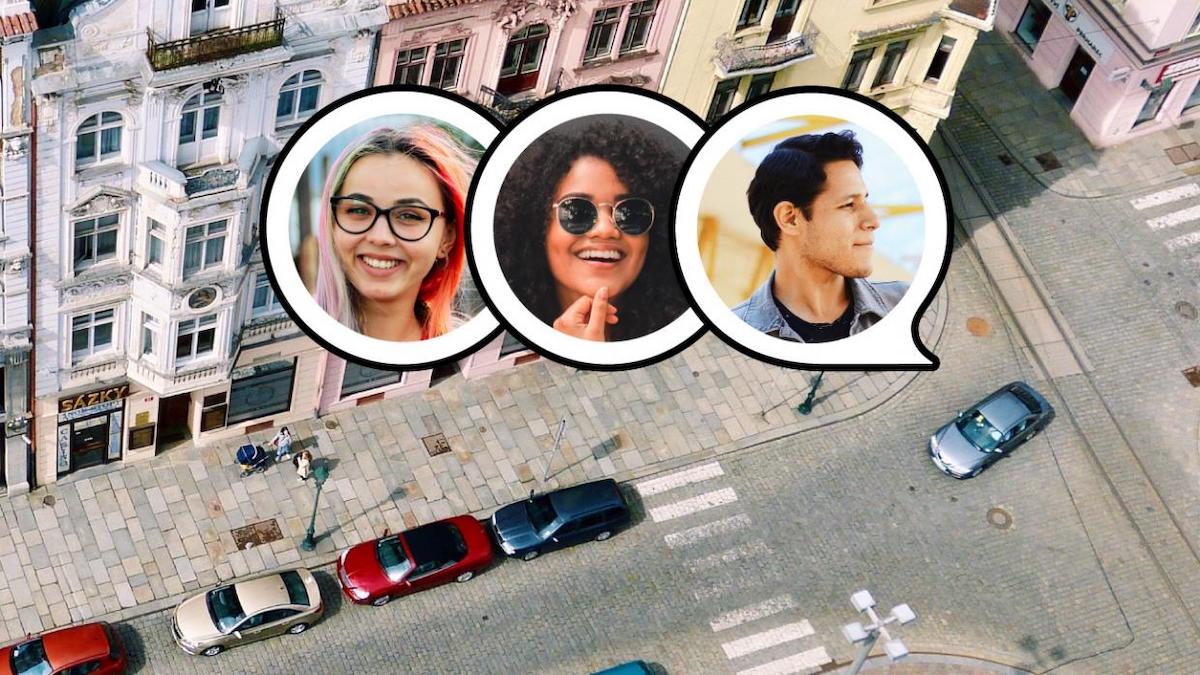 Waze started off in 2009 as a new kind of mapping service—relying on crowdsourced GPS data from its users’ phones, then finding the fastest path from point A to B on less-used streets. This much you know.

But now, as even the rat runs and back streets are filled to bursting point with drivers trying to dodge the congestion of major roads, Waze’s big thinkers aren’t looking to leading-edge tech a second time—instead, they want you to carpool. You know, when you feel comfortable sharing a car with a potentially germ-carrying stranger again.

So, it’s ridesharing, but not in the way that the term ‘rideshare’ was corrupted by the likes of Uber when it was trying as hard as humanly possible to avoid the word ‘taxicab.’ This isn’t a for-profit transaction, as Waze stresses; the price that you pay to ride in someone else’s car only goes to paying for fuel and tolls. And, as Wired reports, drivers are “limited to two money-making drives a day, at a maximum payout of $25 (P1,226) per trip.” So, it’s not a money-spinner, just a money-saver.

The upshot is that the rider doesn’t have to drive, or search for spotty public transport. The driver gets reimbursed for the costs of the commute. And each person that takes up carpooling is one less single-occupant car taking up space on the road and in car parks—not to mention the environmental benefits. 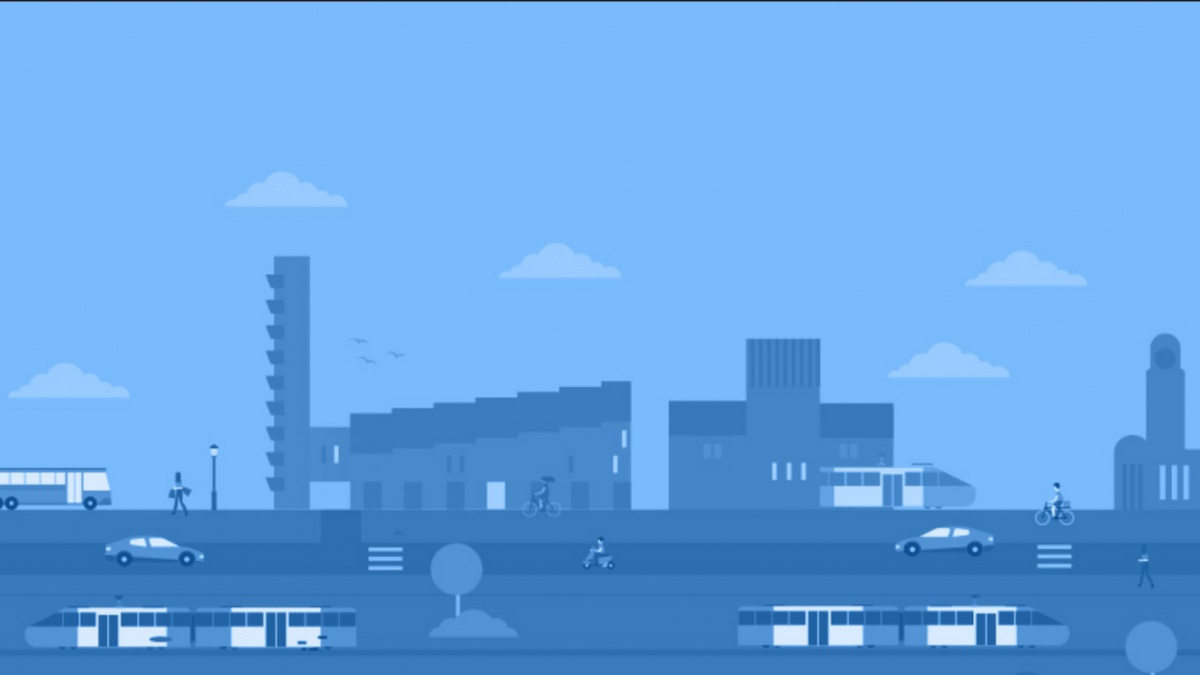 If you’ve ever gone anywhere near a TED keynote or a Consumer Electronics Show, or experienced the fever pitch of a Silicon Valley product launch, you’ll probably be familiar with the phrase ‘Mobility as a Service.’ And by familiar, we mean ‘buried under the weight of hearing pointless buzzwords ad infinitum.’

But it seems that this one’s going to be a very big thing, very soon. Finnish app Whim is kind of a catch-all mobility pass, combining all available modes of transportation in a given city. That means you have the choice of a rental car, public transport, city bikes, taxis, e-scooters, and roughly everything up to the donkeys that take you up the hill in Santorini. How you choose to get about is up to you, and logic still applies to cost—it’s cheaper to use public transport than to take a taxi—but Whim allows you to pay for your entire journey from one app, rather than juggling subscription services and travel cards.

So, if you want to, you can take a cab to the train station, head into town, then jaunt the last bit of the way on an e-scooter. It’s what Uber promised—filling in the gaps around public transport, rather than replacing it—but it works because it uses existing transport architecture, and can add new modes as they’re invented and implemented.

It’s now in Helsinki, Tokyo, Antwerp, Vienna, Singapore, and Birmingham, with plans, as Forbes reports, to extend to Amsterdam and beyond. 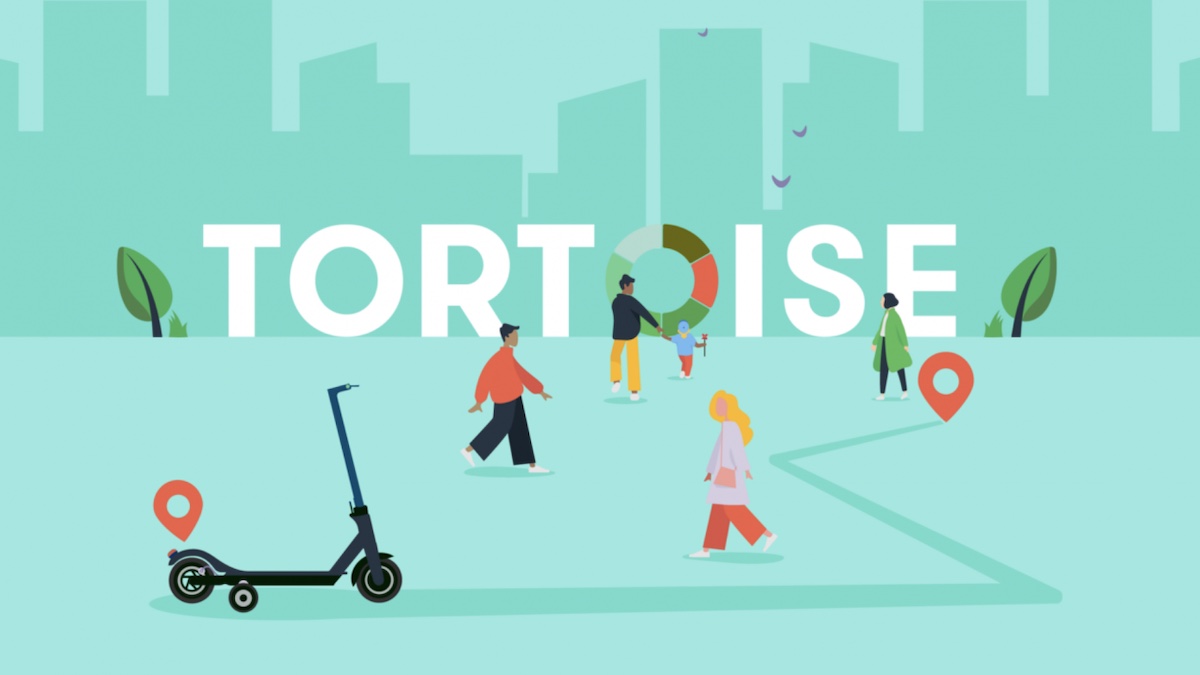 Solving the uneasy, money-losing business of for-hire e-scooters
With autonomous scooters that take themselves to charging stations, and to you

Electric scooters have had a bit of a spotty run so far—they’ve been the cause of protracted legal tussles with city councils, rampant nimbyism from locals, and, on occasion, exceptionally serious accidents. Their out-of-nowhere rise to almost infestation levels in some cities has even seen them lampooned in an (admittedly great) episode of South Park.

But what if they didn’t just hang around on footpaths, waiting to be tripped over? What if a man didn’t have to drive a van around, picking up scooters with flat batteries in a sooty diesel van and taking them to a shed to be recharged? What if you could summon an e-scooter to where you need it, when you need it?

That’s the plan of Tortoise, headed up by Uber’s former director of business development, Dmitry Shevelenko. Yep, this could be the way we do short, fair-weather hops in the future: calling an autonomous e-scooter to our location, then swanning along like a tourist in Paris.

Tortoise won’t build scooters of its own—there’s more than enough fish in that particular pond. Instead, Tortoise provides the sensors and software that e-scooter companies like Lime, Bird, and Wind need to direct their scooters to where they’ll be used most—and, crucially, to charging locations. Oh, and in case you’re wondering, Tortoise also installs a set of training wheels for scooters of a two-wheeled variety that can’t stand up by themselves.

As Shevelenko told Fast Company: “There’s not a single operator that’s making any money today, and a big part of that is their single biggest daily operating expense is moving the scooters and e-bikes to get recharged every night and placing them back out on the street.”

And as he told TechCrunch: “We only want to deploy in cities that want this and have given us written permission. If the cities say yes, then the operators say yes.” 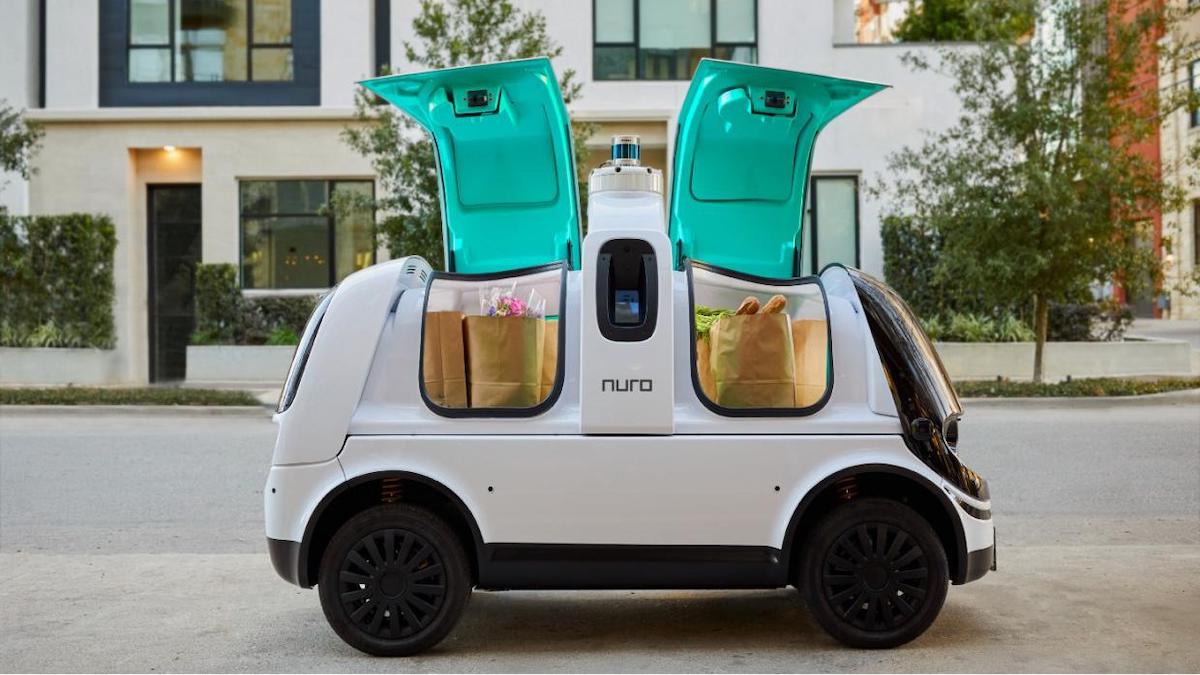 Solving the street-clogging reality of home delivery
With autonomous delivery vans. And some lateral thinking by us

Even if we do use multi-modal transport that starts off with a quick Waze carpool and finishes by calling an autonomous Lime scooter and zipping the rest of the way, we’re not going to do anything to help reduce a major source of congestion: delivery vans.

As we reported while back, there’ll be four times as many “transported goods” in 2050 as there are today. And, as a small litmus test of what that means, on Amazon Prime day in 2016, more than 600 items were ordered. Every second.

And it seems that New York is our litmus test for the effect that home deliveries are already having on city streets, as per the New York Times: “Households now receive more shipments than businesses do, pushing trucks into neighborhoods where they had rarely ventured. About 15% of New York City households receive a package every day... That means a complex with 800 apartments would receive roughly 120 packages daily... While the rise of ride-hailing services like Uber has unquestionably caused more traffic, the proliferation of trucks has worsened the problem. The main entryway for packages into New York City, leading to the George Washington Bridge from New Jersey, has become the most congested interchange in the country.”

Self-driving vans don’t solve these problems on their own—an autonomous delivery van is still a van, that will still take up space on the road and by the curbside. But employ a little lateral thinking and a self-driven van starts to make sense. Currently, deliveries to homes tend to be by day, because that’s when delivery drivers work. Yes, a whole heap of transportation and logistical work goes on in the smallest hours of the morning and largest hours of the night, but think back to the last time a delivery driver showed up at your house at midnight with a package.

So, rather than make delivery drivers’ lives even more hellish by forcing them to work nights, why not get an autonomous van to do it? Such vans could ferry purchases around by night, when traffic is at its lightest, with a building’s night manager taking care of deliveries. In the NY Times’ scenario of 120 packages a day to an apartment building, it’s fair to say that ‘building manager’ would be a bit of a growth industry.

But what if you live in a single-occupancy house? Well, would you forgo saving money on your deliveries, if you scheduled them for late at night or early in the morning? And could you go past the security of knowing, without a shadow of a doubt, that a 7am delivery meant 7am? Imagine scheduling a delivery for a certain time, tracking it on your phone and picking it up out the front of your house. That sounds better than some of the most optimistic delivery times ever known to man and your expensive purchase left behind a bin or with your creepy neighbor, doesn’t it? 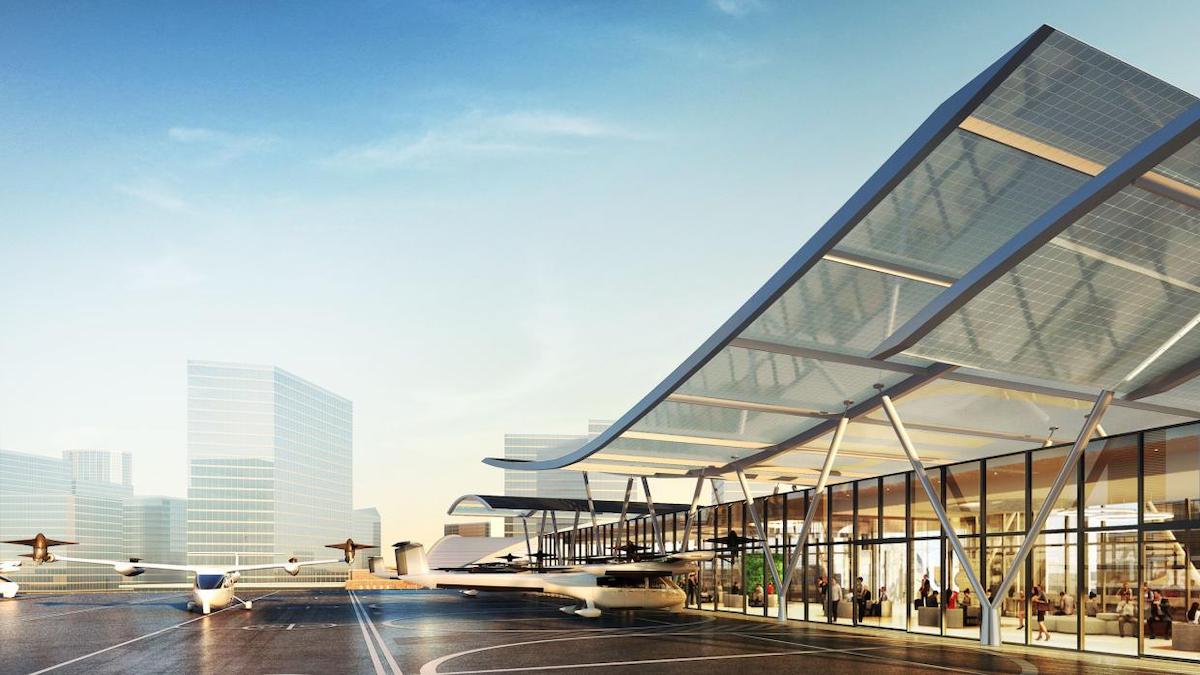 Solving rich people having to get stuck in traffic in their limos
With oodles of investors’ money!

Not all modern traffic solutions cater to the 99%. Behold, the most exclusive of traffic-beaters: the on-call helicopter.

Only if you look at Uber’s bumf, there’s not a helicopter to be seen among the illustrations of futuristic autonomous multirotor VTOL aircraft and glittering ‘Skyports’. Thing is, it’s been at this for a while now without really going past what anyone who’s ever watched Succession would recognize: helicopters. Helipads.

But it’s not for lack of trying, or from a lack of industry involvement. Uber’s plan is to get experts in their respective fields—Embraer, Boeing, Hyundai, NASA, Bell, among others—to develop the hardware, while it’ll supply the software side and, crucially, the customers.

Look, soaring over traffic has been a goal of humanity since traffic and airplanes existed. Even Henry Ford himself had a crack at personal aerial mobility, as one might refer to it these days, back in the 1920s. It ended...well, you can imagine how well. Meeting safety, cost and regulatory requirements have been impossible so far, but more than a small part of us wants this to work—even if it still hasn’t, 100 years after Henry Ford gave it a go.

Gallery: The cars with the coolest engine-start buttons
View other articles about:
Recommended Videos
Read the Story →
This article originally appeared on Topgear.com. Minor edits have been made by the TopGear.com.ph editors.
Share:
Retake this Poll
Quiz Results
Share:
Take this Quiz Again
TGP Rating:
/20