Why are some F1 cars still ‘porpoising'?

F1 has introduced new rules for 2022 designed to make racing closer and more exciting. It’s a massive shift from the regulations of old, and means the teams have basically had to start from scratch this season.

It’s why Mercedes is no longer doing the lion’s share of all the winning, and why commentators around the globe are repeatedly referring to ‘porpoising’.

Which has left many fans asking ‘Er, what’s porpoising, exactly?’ It’s a fair question: even experienced fans have a hard time navigating all the jargon used by F1 folk and porpoising is just the latest catchphrase on the list. Right behind the likes of pit window, red flagged, DRS zone, and everything else in between.

So in order to clear up porpoising once and for all, TG has compiled this handy guide. Please kindly continue scrolling…

Right, in the simplest terms, porpoising is an aerodynamic phenomenon that F1 cars have started to suffer from since the adoption of the so-called ‘ground effect’ philosophy, where air is sucked underneath a car to pull it down onto the track at high speed, rather than over the top of the car to push it down. With us so far?

The trouble is, the faster you go, the further a car wants to be sucked to the floor. And if it gets too close it can cause the airflow to stop - or ‘stall’ - meaning the downforce created suddenly drops off a cliff. At that point, the cars spring upwards.

Once the car’s floor is clear of the ground however, the flow of air kicks in again and the car is sucked downwards once more. This aggressive bouncing is porpoising. 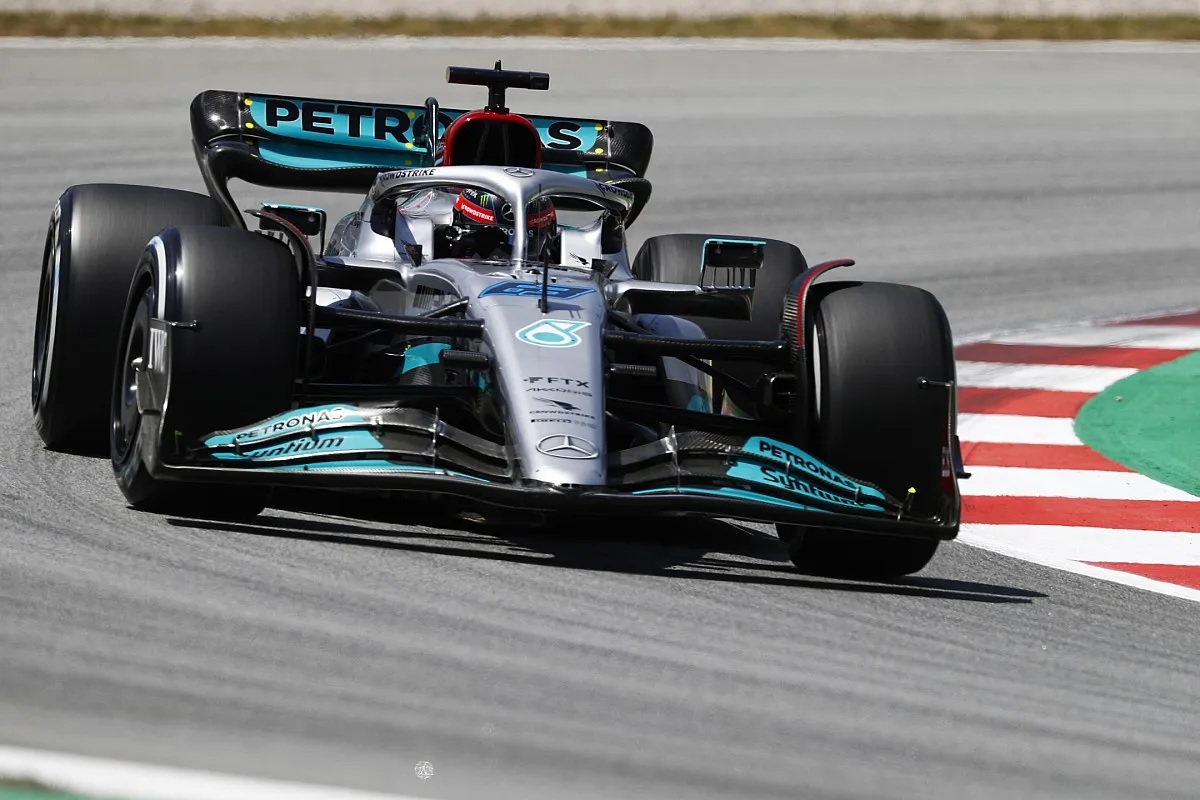 Why is it called porpoising?

Funny term, isn’t it? Porpoising comes from the humble porpoise, a sea-dwelling mammal that’s known to bob up and down on the surface of the ocean as it swims along. Very similar to the dolphin, but ‘dolphining’ doesn’t have the same ring to it, does it?

To expand a little, F1’s new rules are born out of a desire to see cars able to follow each other more closely. You see, under the old rules, getting close enough to a rival to launch a Daniel Ricciardo-style overtake was very difficult at most circuits, because the manner in which the cars created downforce left a wake of turbulent air. If you got stuck in this ‘dirty’ air, you’d lose downforce, making overtaking more difficult.

It’s the main reason why F1 cars have the DRS (Drag Reduction System); a flap in the rear wing that gives higher top speed, which drivers can open when they’re within a second of the car ahead.

Anyway, back to porpoising. F1’s new cars are designed to significantly reduce the turbulent air they create (notice the winglets on the tyres, and how the front wings are far less complicated than before?), meaning cars lose far less performance when running nose to gearbox.

To compensate, they now generate that all important downforce through ground effect, with a pair of ‘venturi’ tunnels running underneath the cars. By forcing air through these at speed, you can create a significant suction force that gives us the incredible speed we all want to see from F1’s finest, without the shortcomings of before.

Porpoising is what happens when you can’t control what the downforce does to the floor of your car.

How can you stop porpoising?

Oh that’s easy, just raise the ride height of your car. ‘So why don’t teams just do that?!’ we hear you ask. It all comes back to that key phrase again: downforce. By running a car higher off the ground you can prevent porpoising, but it also means you’ll create less downforce.

It doesn’t help matters that clever hydraulic suspension systems have been banned, partly because they’re expensive (and teams operate under a cost cap now) but also because they were found to contribute to that dirty air we were talking about. So that’s not a solution teams can pursue.

Potentially yes. Mercedes has suffered from porpoising worse than any other team on the grid this year, and after the Azerbaijan Grand Prix Lewis Hamilton said there were times he very nearly lost control of his car in the high speed corners.

To be clear, Mercedes reckons it’s now got on top of its porpoising issues, as evidenced by its pace improvement at the Spanish GP. But by running the car as low as possible, they are now bouncing heavily at tracks with uneven surfaces. Very similar to the untrained eye, but separate problems.

Anyway, many, if not most of the drivers have urged the FIA to intervene, with some believing that it’s only a matter of time before they sustain significant injuries, either from having a massive crash or through the repeated (and in some cases quite violent) bouncing.

It’s not that simple though. Not all of the teams are suffering that badly from porpoising, and those that foresaw the problems and built machines accordingly think it’s up to their rivals to design better cars. Both sides have a point. 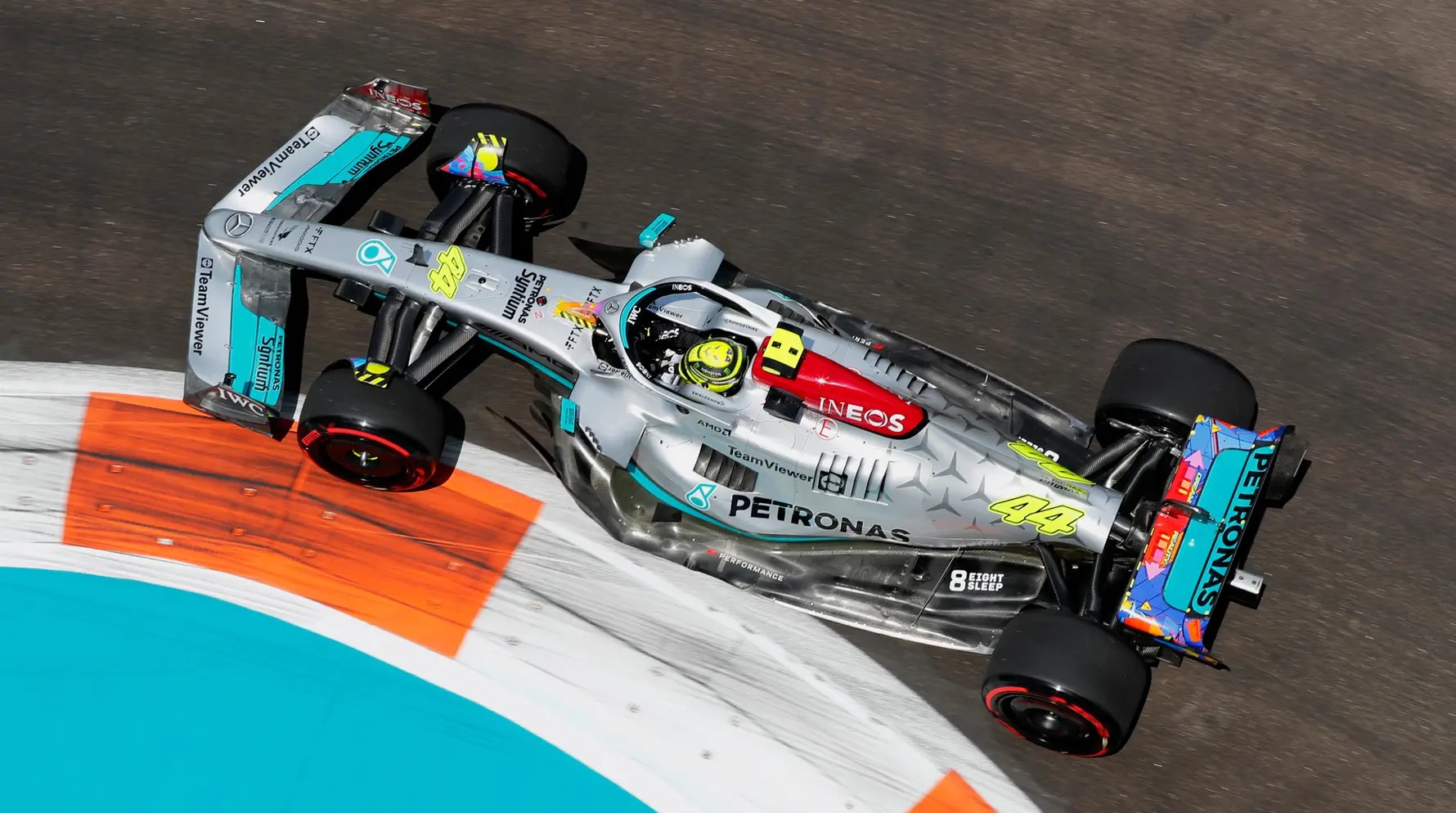 Why are some teams affected worse with porpoising?

Good question. And if we had the brainpower to give you a detailed answer, we’d likely be lecturing at Harvard and not scribbling for TopGear.com.

However, it all comes down to the different philosophies the teams have adopted with their cars, and how well those designs translate into the real world.

Take Mercedes and its narrow sidepod strategy: according to the team this should create huge amounts of downforce, but their powerful computer simulations didn’t predict the bouncing that became obvious in the first lap of testing, and months later they’re still struggling with it.

There was some speculation that the lack of sidepods compared to the other teams meant the floor - which is so important for generating downforce - was too exposed and therefore flexing at high speed.

And that’s the key: generating a stable, manageable downwards force that goes up to (but not beyond) the limit of what’s possible under the new regs. At the time of writing Red Bull is leading the championship having won five races in a row: looks like that’s another win for the F1 superbrain that is Adrian Newey.

Like being beaten with a jackhammer? Or riding a carbon fiber space hopper?

Obviously we haven’t driven a 2022 F1 car ourselves, so here’s Lewis Hamilton speaking immediately after the eighth race of the season in Baku: “I just got through that race on adrenaline, biting down on my teeth through the pain. I can’t express the pain that you experience, especially on the straight here.”

And here’s his teammate George Russell: “We were smashing the ground every single corner and every lap for 90 minutes. It was pretty brutal.”

Not pleasant, in other words. The reboot of ‘Forza Motorsport’ is coming in 2023
View other articles about:
Recommended Videos
Read the Story →
This article originally appeared on Topgear.com. Minor edits have been made by the TopGear.com.ph editors.
Share:
Retake this Poll
Quiz Results
Share:
Take this Quiz Again
TGP Rating:
/20