Has increased German carmaker's market share each year of his tenure
by Vernon B. Sarne | Feb 26, 2013
CAR BRANDS IN THIS ARTICLE 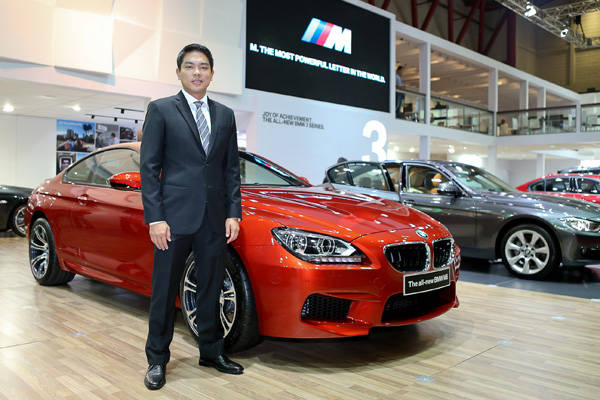 If you bump into 40-year-old but baby-faced Peter "Sunny" Medalla in a watering hole, you'd think he's just another one of those lucky bastards living off rich daddy's fortune. He dresses well and acts with a confident demeanor that could just as easily be mistaken for conceit.

In truth, Sunny is a car-industry veteran who is making waves in Jakarta as the sales and marketing vice president of BMW Indonesia, whose sales total has tripled since it hired its Filipino executive in June 2009. Oh, and yes, Sunny also happens to be a family guy who loves to rattle off his kids' latest achievements, but that's another story.

Before joining BMW Indonesia, Sunny was BMW Philippines' sales director from 2005 to 2008, choosing to pack his bags when BMW pulled out its subsidiary from our market. Prior to BMW, he was Ford Group Philippines' fleet sales manager from 2001 to 2005. He started his career in the auto industry with Toyota Motor Philippines, as a member of its dealer sales operations team from 1994 to 1998.

So, how does a Filipino executive sell premium cars to Indonesians?

"I apply the same guidelines I used in selling cars to BMW-loving Filipinos," Sunny tells us. "Like Filipinos, Indonesians love going to the malls. On any given weekend of the year, we organize anywhere from two to four mall displays. In this relaxed environment, customers can freely interact with our sales consultants and have a closer look at our newest models. The same goes for our communications strategy. We made some mistakes in our first few years, and had to carefully choose the right media for our advertising campaigns."

Of course, selling BMW cars in Indonesia is not all about mall displays. It's also about providing value, according to Medalla.

"Although BMW's brand was getting stronger, we had to revisit our whole model strategy to provide specifications that were better than those of the competition," he explains. "For example, all 3-Series variants were equipped with GPS navigation, and that was a significant differentiator. For the 5-Series owners who are normally chauffeur-driven, we equipped the cars with rear-seat entertainment, which was previously available only in the 7-Series's segment."

And yes, nothing beats a proper test drive, Medalla points out.

"With the growing availability of high-tech features in Japanese and Korean cars, you can no longer sell a BMW by just going online or presenting a brochure," he says. "The key is to have customers personally experience the vehicle--not only for drives around the corner but for weekend drives as well. This is the only way one can truly experience the power, ride and feel of a BMW."

"For certain models like the 7-Series, we've offered a BMW Drive Experience in Munich, for instance, complete with a personalized tour of the BMW Welt and the BMW Museum."

"I intend to take market leadership for BMW," he declares positively. "We are aggressively expanding our dealership network primarily in Jakarta and growing provincial cities. We plan to open three new dealerships this year and another four next year. At the same time, our existing dealerships are undergoing major refurbishment to conform to the latest BMW design attributes."

But more than the mall displays and the extended test drives and the dealership expansion, perhaps Sunny's most important contribution to his present employer is his emphasis on the importance of interpersonal skills when dealing with customers.

"We are focused on improving our dealers' soft skills or social graces," he shares. "We have employed a team of coaches who work closely with our dealers to improve anything from the new-car delivery experience to even seemingly mundane stuff like e-mail and phone etiquette."

Ah, personal touch and people skills. Count on a Pinoy executive to be a master practitioner in the field. That's what Sunny Medalla has learned through years of hanging out with friends in Manila's watering holes.

Video: Our consumer editor's first impressions of new Toyota RAV4
View other articles about:
Read the Story →
This article originally appeared on Topgear.com. Minor edits have been made by the TopGear.com.ph editors.
Share:
Retake this Poll
Quiz Results
Share:
Take this Quiz Again
TGP Rating:
/20