One for the books
by Leandre Grecia | Jul 29, 2021
CAR BRANDS IN THIS ARTICLE

“Guys, Toyota GR Yaris on July 17th at Clark.” Those were the exact words sent to our team’s chat group when we finally got confirmation about our first test drive with the hot hatch. I honestly paid no mind at first. It was exciting to think about it, but there was no way I—someone with absolutely zero track experience—would be the one Top Gear Philippines would be sending to drive the GR Yaris. The GR Yaris, the hatchback everybody’s been talking about.

For whatever reason—and because none of my superiors here pull rank—I still got the assignment. The funny story was that I was only supposed to chauffeur our photographer Mark Jesalva to the Clark International Speedway (CIS) during the event. But as luck would have it, we got word from Toyota Motor Philippines (TMP) with just a week to go that I could fill in the second driver slot for TGP. So that really settled it: My first track day was officially going to be with the GR Yaris.

Was it daunting? The driving part, not really. I know driving around the track is much, much different from real-world driving. However, I’m pretty confident behind the wheel myself, so manning a small hatch with a stick-shift and a 1.6-liter three-cylinder turbopetrol pushing 260-something horses didn’t really feel like that big of a deal. No, really, it didn’t.

What was really intimidating was the importance and the sheer gravity of the hatch we were going to drive. Again, it’s the GR Yaris. I can’t recall how many times I’ve looked up articles and watched videos of this thing from foreign titles ever since its global launch. Did I deserve this? Perhaps not. But that doesn’t matter, because I was going anyway. And to make it even better (or worse) TMP was also going to let us have a go at the Supra, another beast I haven’t driven yet. At the track. I heard the track virgin in me cry-laugh a bit. 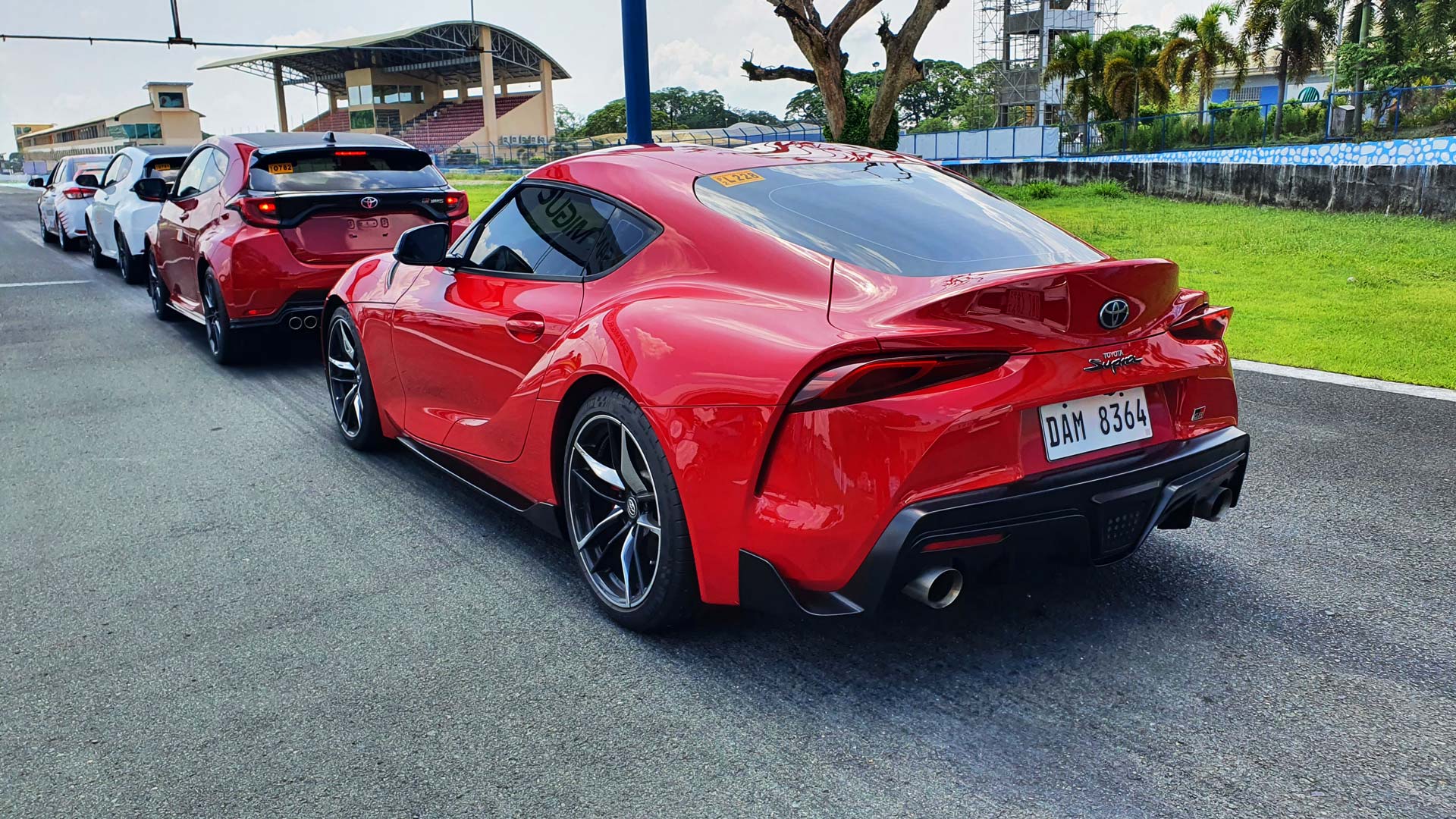 Thanks to COVID-19, though, TMP had to deal with a lot of limitations during the event. This included limits to just how many media personnel they can accommodate at any given time around the track. As a result, we were divided into different batches.

We were part of the first batch, and seeing as we still had some real work to do anyway other than just driving the cars, we decided to just come early so we could make all of our preps beforehand. I’m not gonna lie—I felt some nerves when we took a peek inside the track early on in the morning before all the shenanigans started. Thankfully, as the day went on, the slight jitters went away.

Besides, the Tuason Racing instructors had our backs, so I knew we were in good hands. Plus, I had TGP’s classics and customs editor Ian Magbanua with me, so I was able to ask him some questions, too. Ian hadn’t driven any of the cars prior to the event, either, but he’s had some recent success at the track himself. 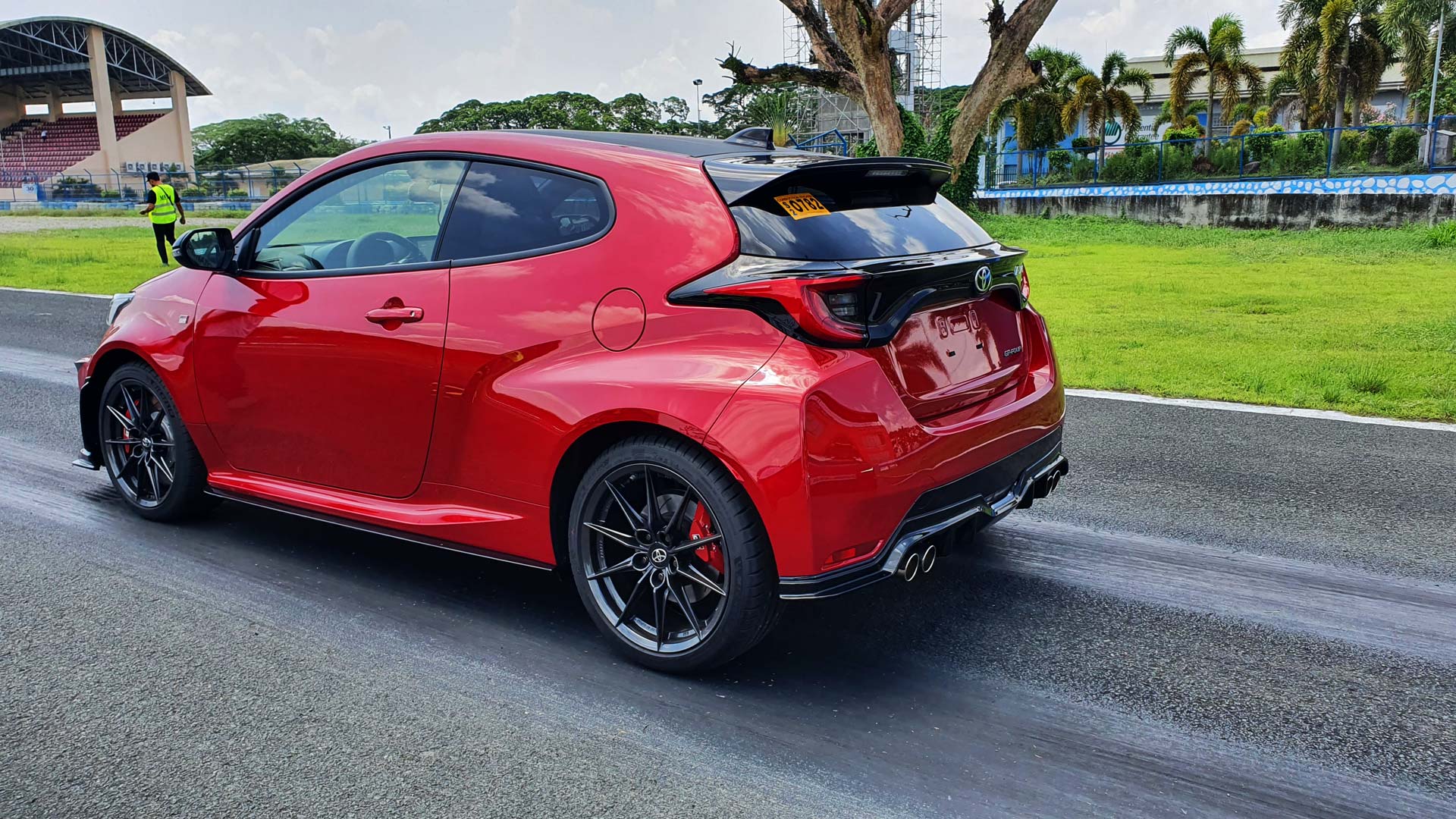 When the day officially started and I was finally to get up close and personal with the GR Yaris, the fact that we were going to be some of the first people to try it out in the Philippines finally sank in. The real excitement finally hit me.

We donned our racing suits, put on our helmets, and stepped onto the track. The first order of the day was the braking test. I was immediately able to get behind the wheel of the GR Yaris, and it was as thrilling as I expected it to be. I felt the raw power of the hatch just through the quick exercise alone.

Next up was the slalom. Unlike the braking test, though, there was a bit of competitive aspect to this one. We had two attempts for both the GR Yaris and the Supra to drive through the course, and the instructors were going to time us on our second run. Obviously, I didn’t gun for anything at all, but to my surprise, I drove the GR Yaris through the course quicker than I expected. Ian finished his timed run in just over 28sec, while I did mine in a smidge over 30sec. Not sure if those are good numbers, but at least relative to what our resident veteran did, mine wasn’t too shabby at all if I do say so myself. 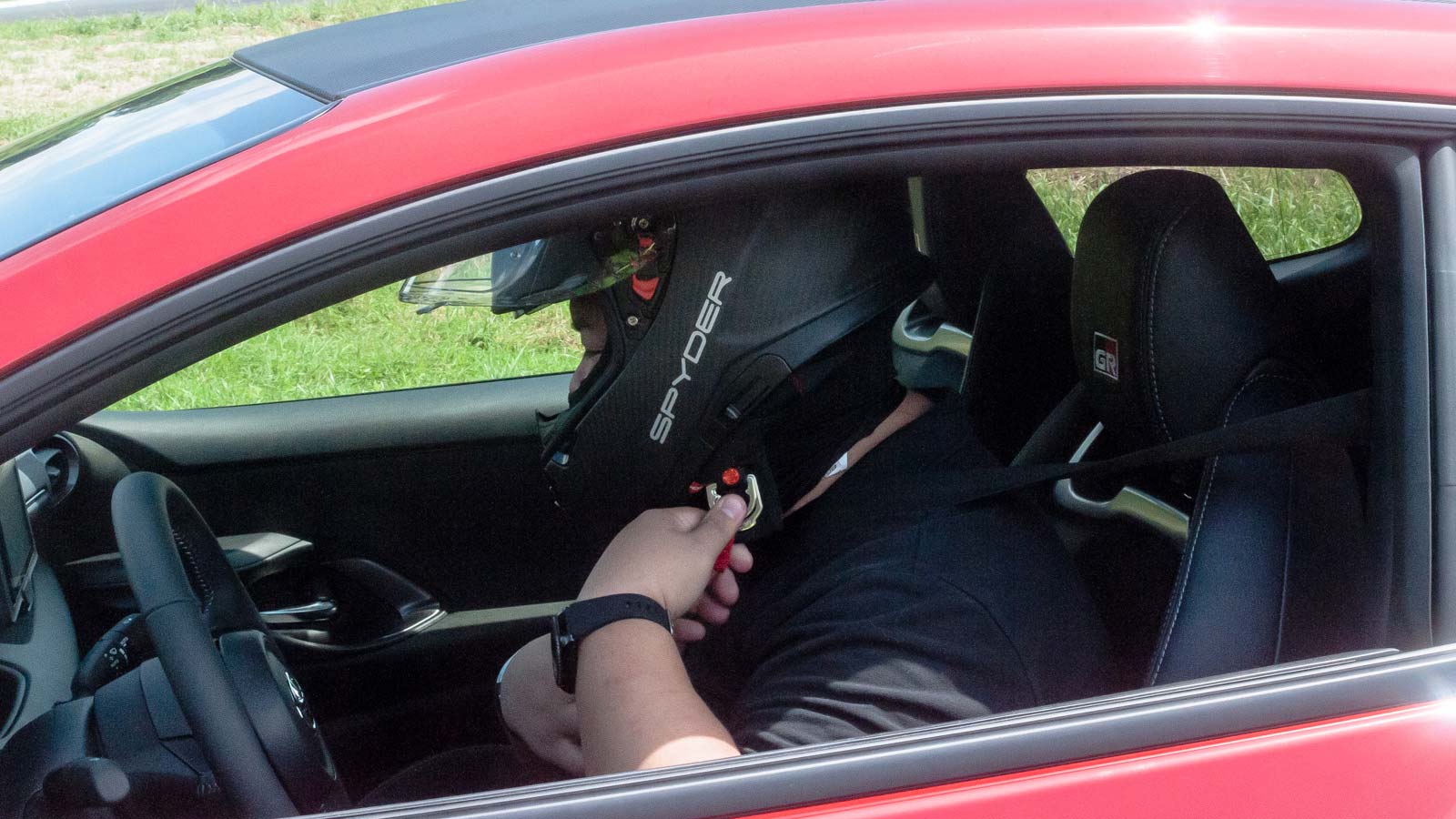 The third and last part of our test drive was the full lap around the circuit. Unfortunately, we were badly pressed for time at this point and we had to cut everything short.

If I recall correctly, according to the original plan, we had an hour or so for this part of the drive. We were supposed to do just two full laps around the circuit in whatever car assigned to us, then we were allowed to drive full laps with whichever car we wanted until the time runs out. In the end, though. I was only able to do two full laps with the Supra and none with the GR Yaris.

Yes, it kinda sucks, but I was still able to ride shotgun in the hot hatch on a hot lap before our time ended. And that’s with no less than the new Toyota Gazoo Racing Philippines ambassador Marlon Stockinger behind the wheel. In a way, that helped make up for things, because I was able to see firsthand just how exactly the GR Yaris was meant to be driven around the speedway. I know I never would’ve been able to do what he did with the car, so it was the best consolation I could ask for.

That pretty much summed up our day at the track. But to give you an even better look at just exactly what went down, you can check out the video below:

Frankly, it still wasn’t the full track experience I envisioned. The restrictions in place undoubtedly affected logistics, and I know we would have been able to go a few full laps more around the circuit—behind the wheel of both vehicles—if it weren’t for this pandemic. But it is what it is. “Ganun talaga, eh,” is what I always say, and I didn’t let the unfortunate circumstances spoil the moment.

At the end of the day, I was still able to drive the Supra for the first time and ham it around CIS at that. What’s more, I was able to get in just a few minutes of seat time in the GR Yaris, which is, again, something not a lot of people here in the Philippines have done, at least as of this writing.

So, perhaps in the near future, I’ll be able to drive the GR Yaris or the Supra again. Perhaps not. Either way, my first time at the track has still been one for the books, and I’m already looking forward to the next one. 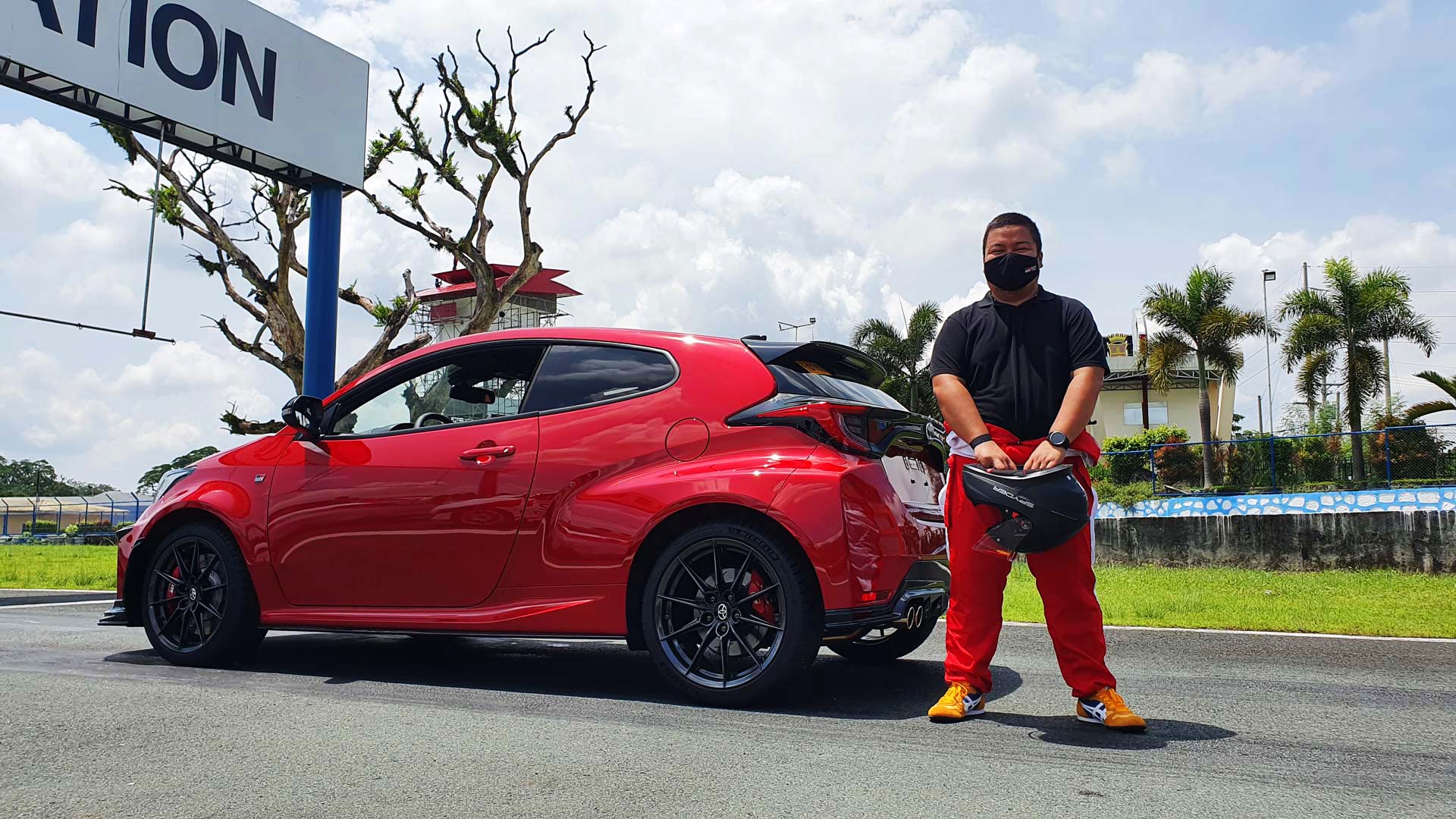 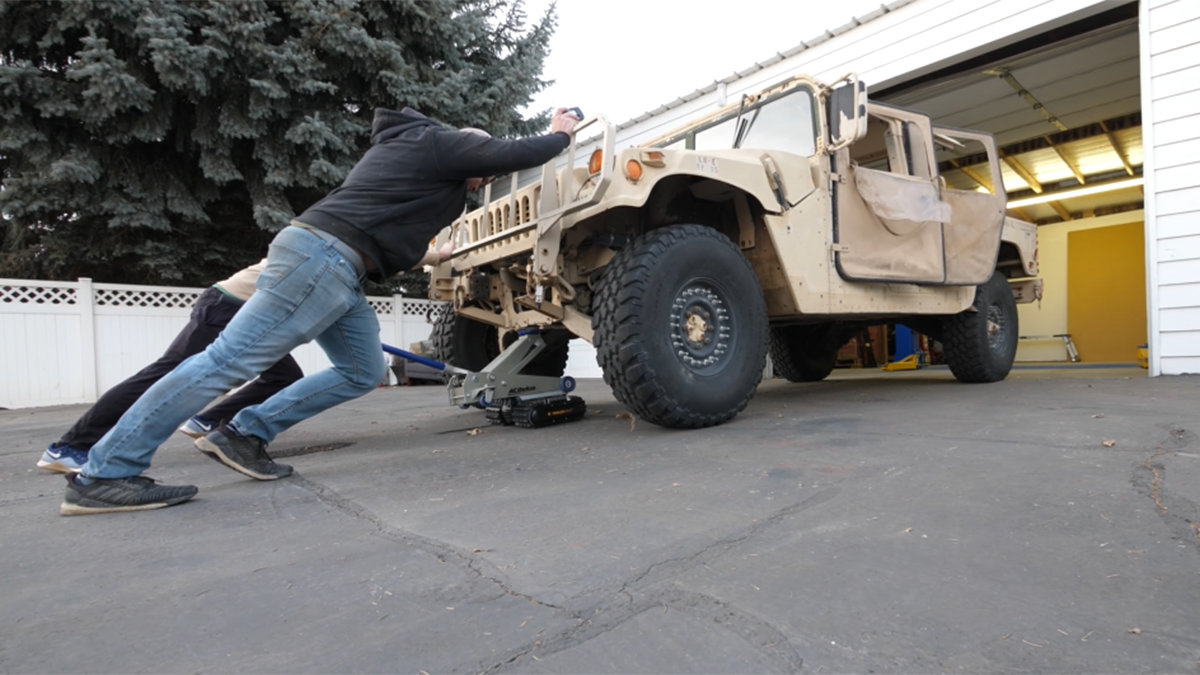 JerryRigEverything is turning a military Humvee into an electric vehicle
View other articles about:
Read the Story →
This article originally appeared on Topgear.com. Minor edits have been made by the TopGear.com.ph editors.
Share:
Retake this Poll
Quiz Results
Share:
Take this Quiz Again
TGP Rating:
/20