Gallery: All the generations of the Ford Bronco

A brief history lesson
by Craig Jamieson | Jul 20, 2020
CAR BRANDS IN THIS ARTICLE

The new Ford Bronco is here (well, for the Americans among us, in any case), and there’s hardly any use denying it: It looks cool. Even those among us who detest SUVs (so, most) and find off-roading about as pointless as a sphere are harboring severe levels of want for this one.

As much as it’s a modern interpretation of the first-gen model, Ford’s designers made sure to include references to the Bronco’s entire history. Well, one or two less savory bits in that history might have been omitted but, y’know, most of its history. So, it’s probably time to see where they got their inspiration. 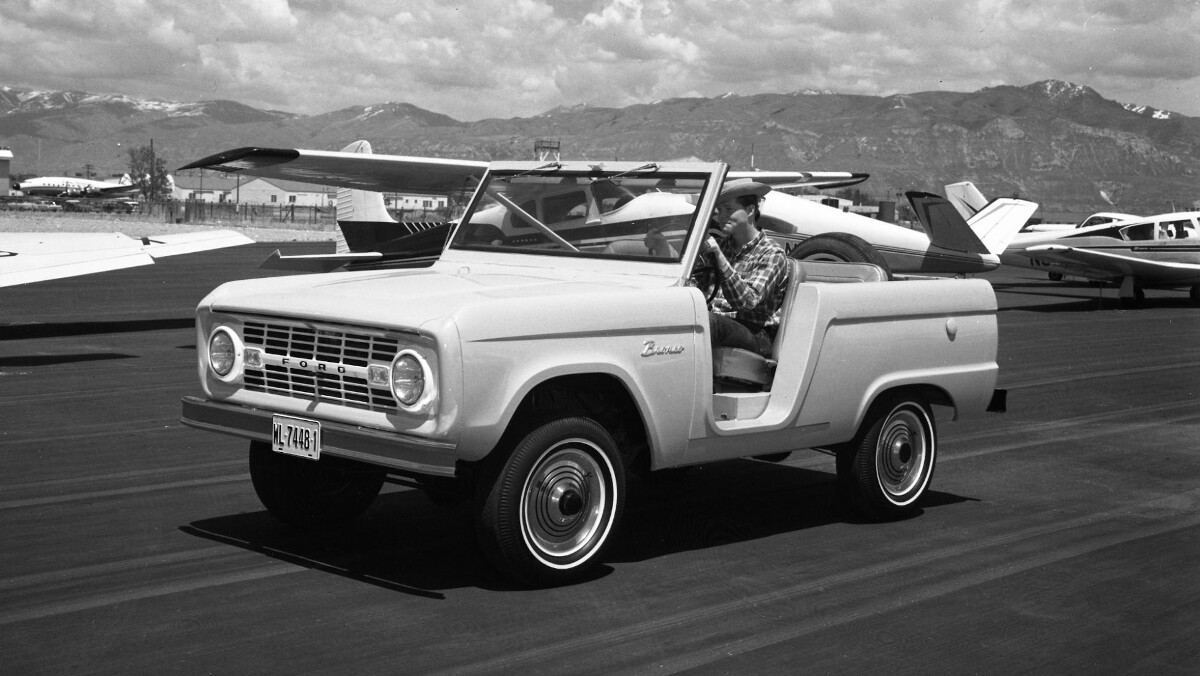 Someone at Ford really had a thing for horses. How else do you explain releasing the Mustang and the Bronco within the space of two years? And Ford’s small car in the ’70s? The Pinto. Yeesh, get over it already.

On the subject of names, the Bronco’s lead engineer was Paul G. Axelrad, which is precisely the kind of name you would want an off-road vehicle engineer to have. Ever had a conversation with an avowed off-roader? You’ve never talked about anything as much as they will talk about how rad their axles are. But we digress.

The first-gen Bronco was all about two things: beating the Jeep CJ-5, and rugged simplicity. So, standard features included a three-speed column shift manual, four-wheel drive and...um. Hmm. Options included a CB radio, a snowplow, a posthole digger, and a power take-off—a splined driveshaft that runs farm equipment, like a tractor has—which probably says a lot about the original Bronco’s intended purpose. And it could be why it didn’t sell anywhere near as many as you might expect—usually around 25,000 a year. Not peanuts, but not the numbers that generate fire just from a marketer’s palms rubbing together. 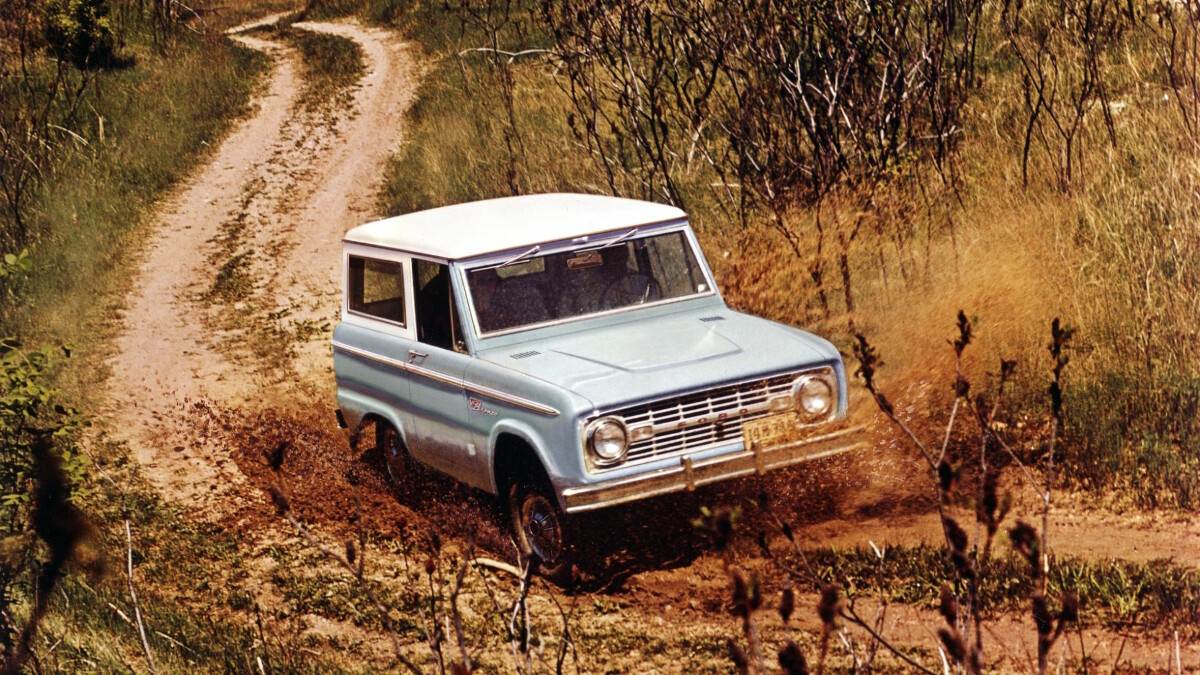 And yes, we’re talking about the icon, the original Bronco that’s pretty enough for Icon 4x4s to make hand-built, six-figure versions for tech bros and hedge-fund vultures. Even the gorgeously squared-off body, which is so iconic now, was done for cost—all the glasswork is flat, to save the cost of curved glass, bumpers were straight, and door skins were the same stamped piece left and right.

Luxuries like an automatic gearbox and power steering came in 1973, but the Bronco remained a proper off-road tool, not unlike something the British had thought of in the ’40s which we won’t mention by name, in case we come over all ‘we thought of that first.’ 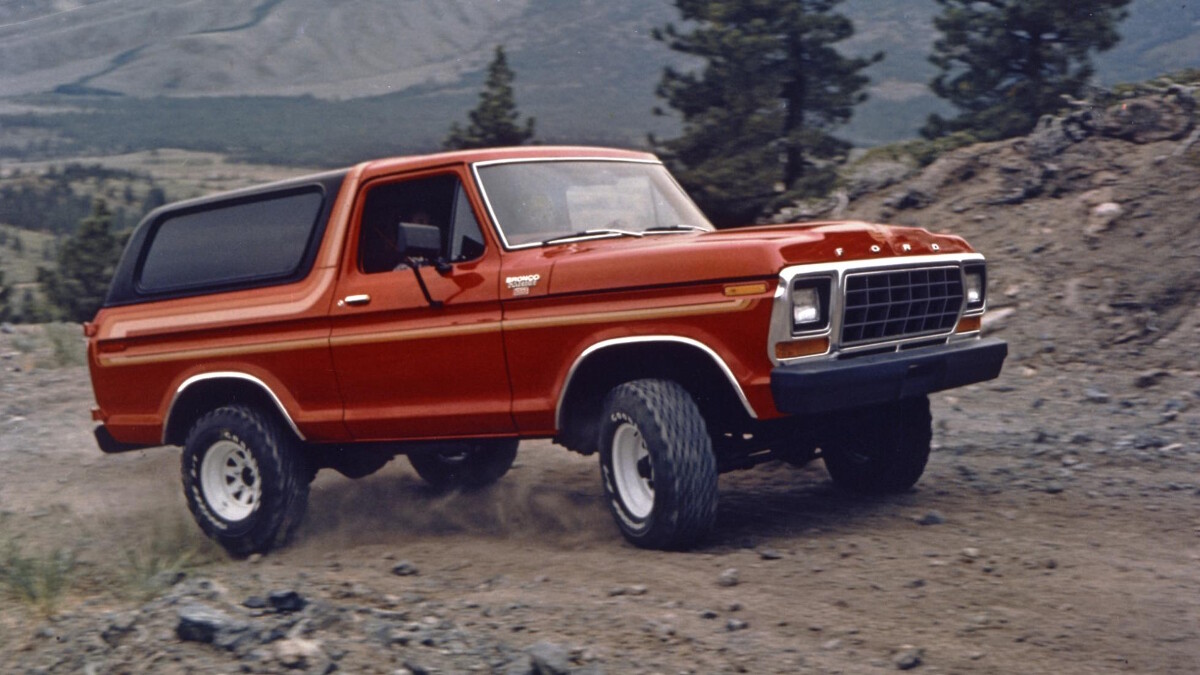 You might be wondering why the first-gen Bronco went for more than a decade and its direct descendent only scraped through two years. Well, that’s thanks to the 1973 oil crisis, which seems to be what we keep arriving at every time we talk about old cars.

If you weren’t alive back then, this could seem fairly silly. But those who were alive back then recall the less-than-excellent experience of having a car that was seemingly intent on burning all of the gasoline, only to discover that there was no gasoline to burn. Not expensive gasoline, but unavailable gasoline—and a car that did a paltry number of kilometers per liter. 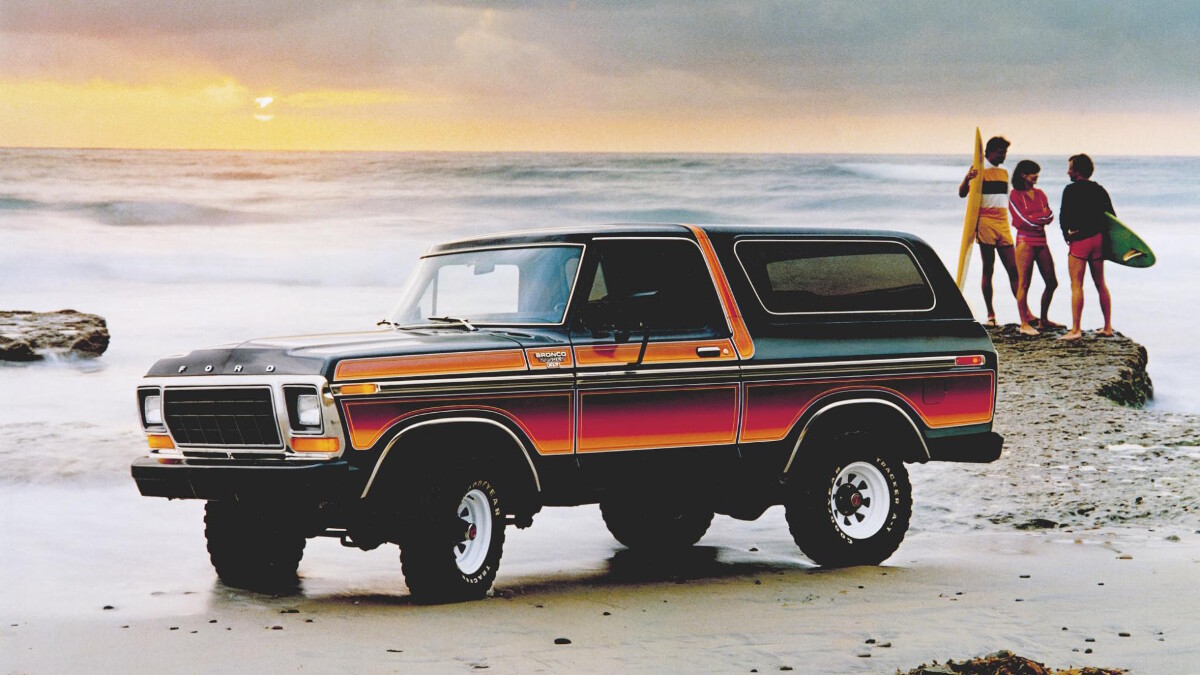 Right, with that labored over enough, let’s get to the second-gen Bronco. The much larger and heavier follow-up model was actually scheduled for a 1974 release, but Ford was concerned that an SUV that was a full foot wider, more than two feet longer, about 700kg heavier, and powered by at least a 5.8-liter V8 would not be the car of the moment in a newly economy-minded market. We don’t know about that, considering that in 1978, when the big Bronco finally made it to market, it was snapped up like the first round of appetizers at a wedding reception—selling four times as many per year than its smaller predecessor. 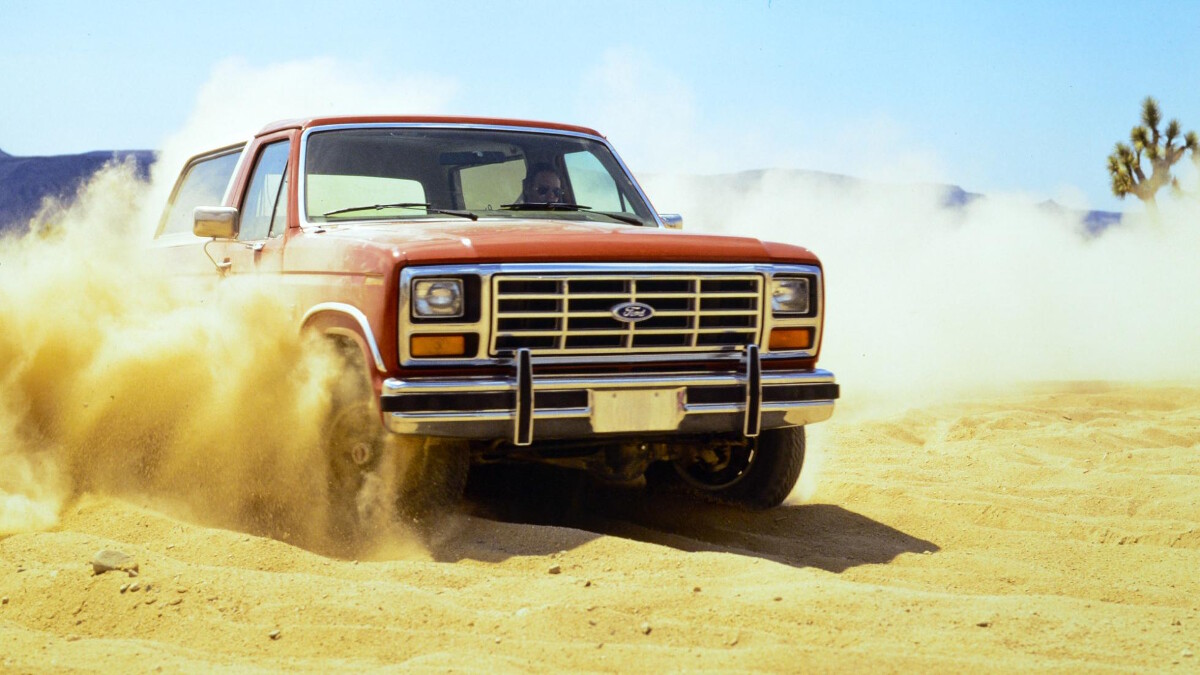 Ah, bless those Americans and their ideas on engine size. For the third-generation Bronco, the standard engine was a 4.9-liter straight-six. And if that didn’t take your fancy, you could always opt for the V8, which was...a 4.9-liter. Yep.

If you were worried about whether eight cylinders or six were the right choice, you could apply the American decision-making process (we hesitate to use the word ‘metric,’ even in that sense) and just plump for a 5.8-liter V8 and get all this confusion out of the way. 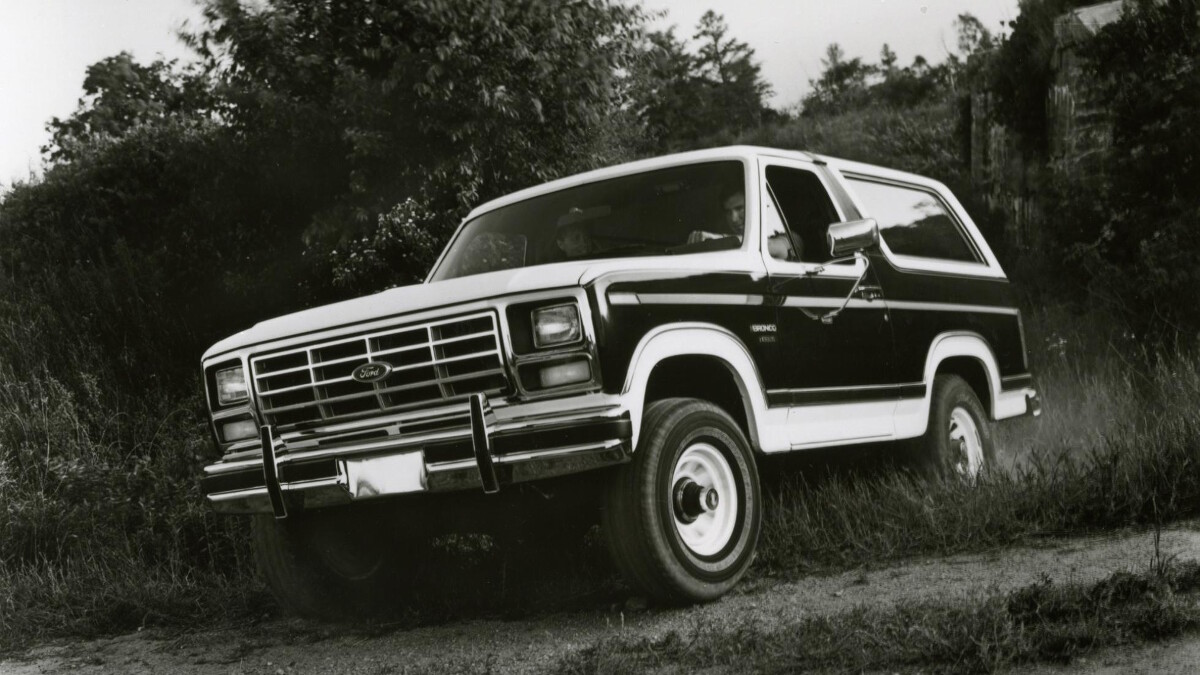 Long before the current glut of gigantic American behemoths were clogging Australian roadways and airways, the third-gen Bronco actually headed to Australia, where it was built with locally produced engines. So, that’s a 4.1-liter straight-six and a 5.8-liter V8 from the Falcon, in case you were curious. Australia is that big, kind of fattish H-shaped country on the other side of the world, in case you were curious about that part. 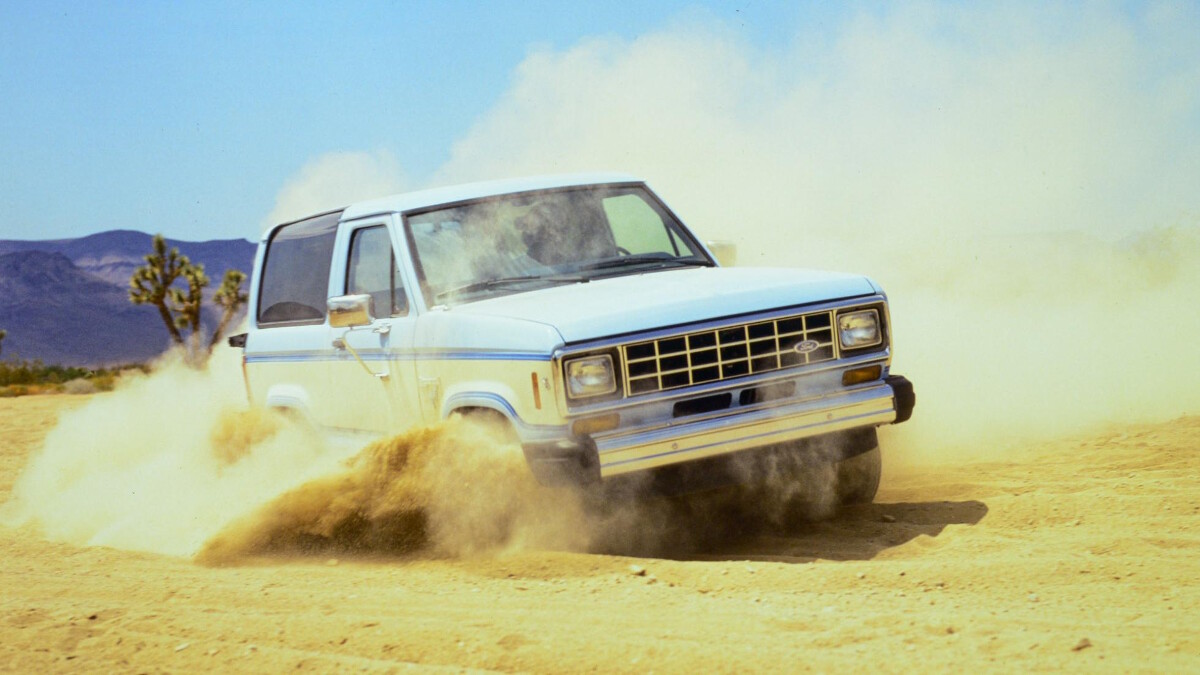 When is a Bronco not a Bronco? When it’s smaller, based on a different platform entirely, and comes with different engines to boot. It actually used Cologne V6s, which men of a certain age, who still use ‘phwoar’ unironically, will know is the same engine used to power the Capri 2.8 injection.

Curiously enough, the Bronco II matched the size of the first-gen Bronco much better than its hulking Bronco successor, so there’s something in the idea that it was perhaps more Bronco than the actual...um, Bronco. Quick side note: does anyone else get the feeling that we’re saying the word ‘Bronco’ just a touch too often, even for an article dedicated to them? 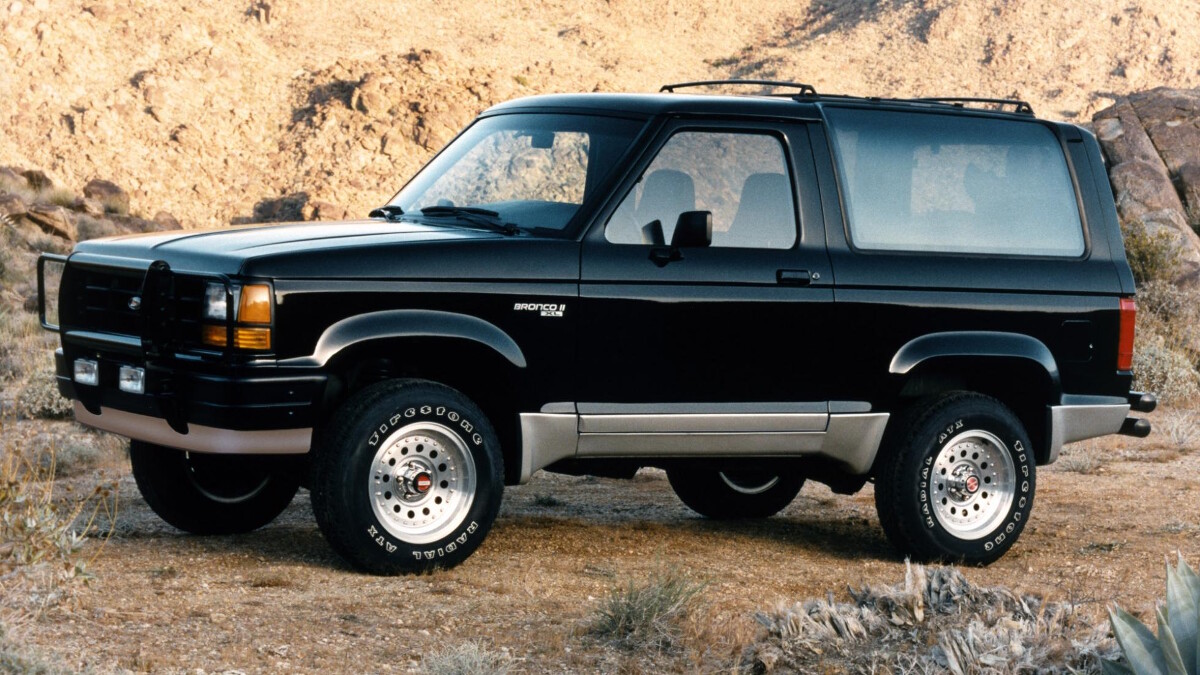 Anywho, this particular game of ‘I am Spartacus’ only lasted until 1990, when the Bronco II was replaced by the Ford Explorer, which was also much larger than the car it replaced.

The Bronco II also had a distinct tendency to stop being on its wheels, even when its driver was adamant that they would prefer it to continue to do so. In fact, this happened so often and with such terrible consequences that Ford paid out a reported $2.4 billion in damage settlements to (we have to assume) erstwhile customers. The Bronco II was killed off and replaced by the Explorer, which also had a distinct tendency to roll over and cost Ford at least $590 million. Anyone else noticing a theme here? 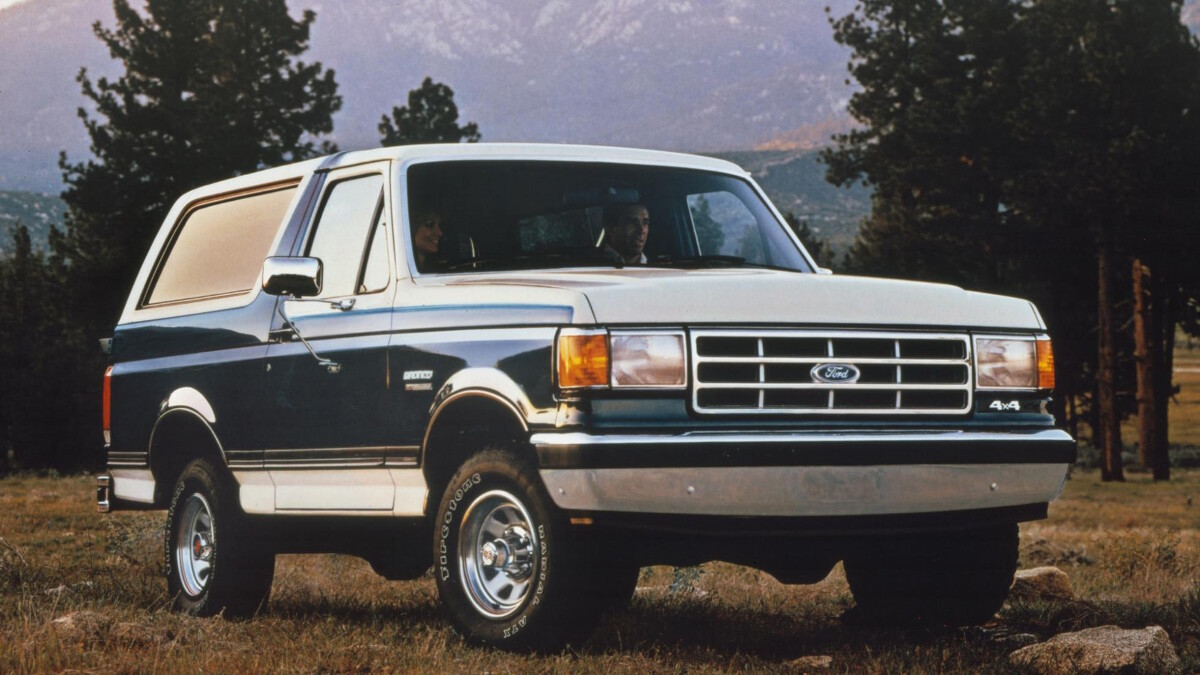 Unlike the Bronco-lite, the regular-strength Bronco continued to be a massive heffalump based on F-150 running gear (and much more besides). It didn’t have a particular tendency to slip the surly bonds of earth and tumble its way through the sky on terror-gilded wings, which put it streets ahead of the Bronco II, and it was actually not the worst-looking gigantic American SUV we’ve ever seen. Plain, for sure, but that actually makes it look like it’s for a purpose beyond trips to the supermarket. 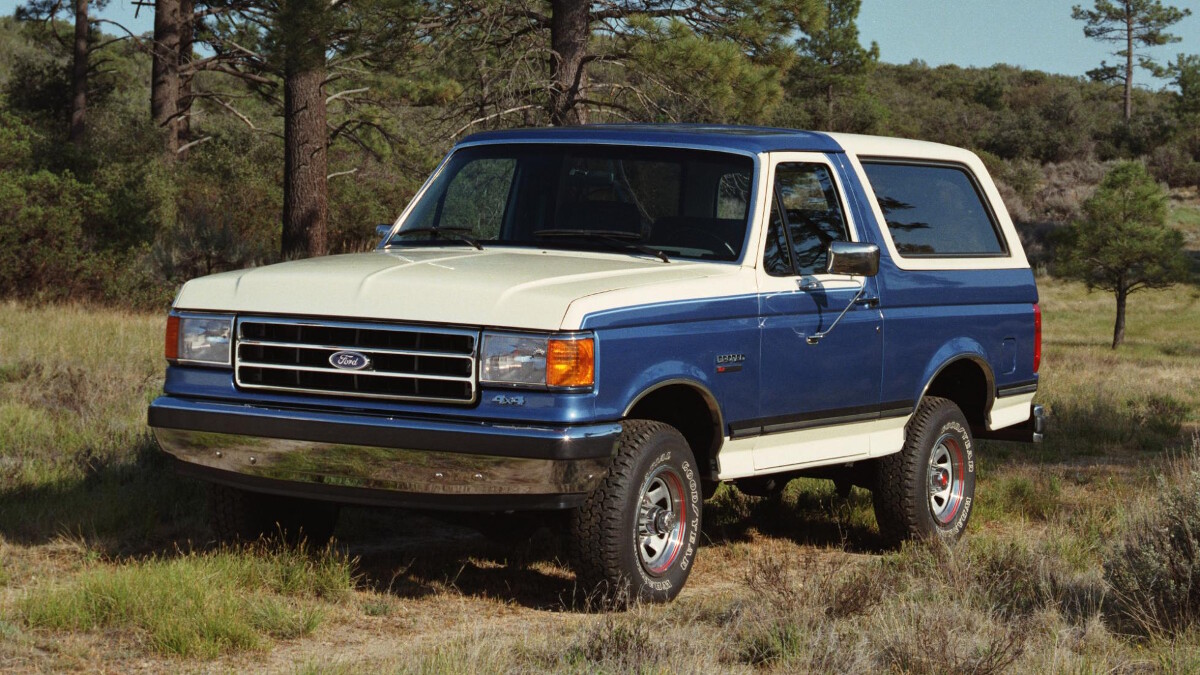 The choice of six- or eight-cylinder versions of a 4.9-liter engine remained, as did the 5.8-liter Windsor V8 (because more power is more better), but luxuries like push-button four-wheel drive, overdrive transmission, and anti-lock brakes were available. Although it must be said that the anti-lock brakes were only on the rear wheels, which to us kind of feels like wearing half a helmet. 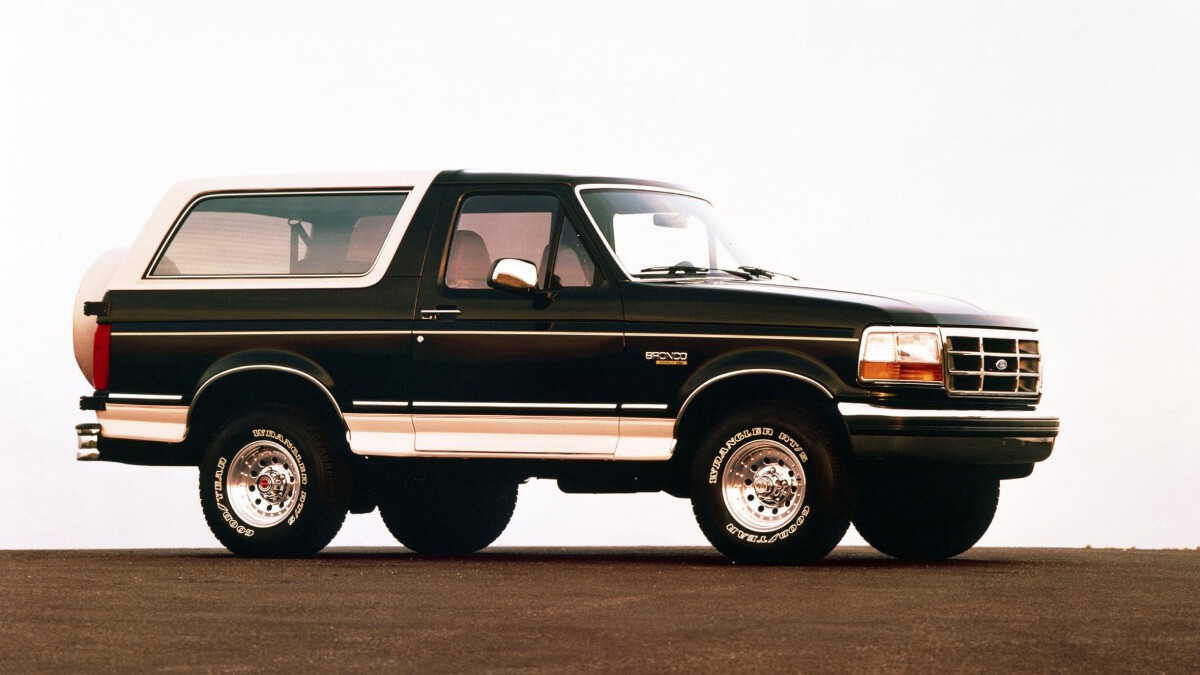 And here, unsurprisingly, we reach the very largest Bronco. And also the Bronco that’s arguably every bit as famous as the first one, if not for the best of reasons. Yes, we could dance around this, trying to get a few cheap laughs out of ‘juicy’ puns and jibes about how a Ford Escape might have been a better choice, but we’re going to do our best to act like adults on this one.

The fact of the matter is that a 1993 Bronco was watched by an estimated 95 million people as it rolled along the I-5 at a steady 56kph. OJ Simpson, chauffeured by long-time friend Al Cowlings, took police on a slow-speed chase on the freeway for hours, before eventually returning to his Brentwood home to give himself up to police. 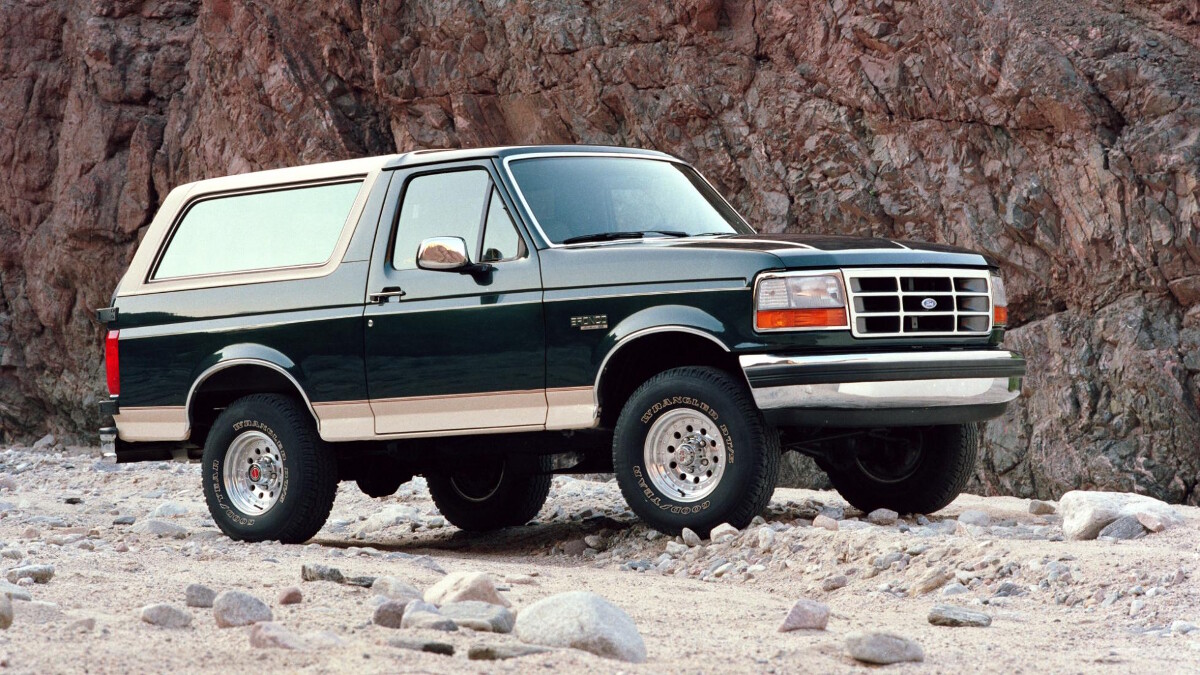 As the largest Bronco Ford ever made, there was ample room for the thousands of dollars in cash, change of clothing, passport, .357 Magnum, family pictures, and fake mustache that Simpson reportedly had with him. And we’d have to assume that the 5.8-liter Windsor V8 would be capable of more than 56kph. And yet the engine’s full potential and, thankfully, none of Simpson’s bug-out kit was used.

Even though the Bronco wasn’t even Simpson’s—it was Cowlings’—it’ll always be associated with OJ. It now sits alongside Ted Bundy’s VW Bug and John Dillinger’s bullet-colandered Hudson Essex-Terraplane in a crime museum in Tennessee. 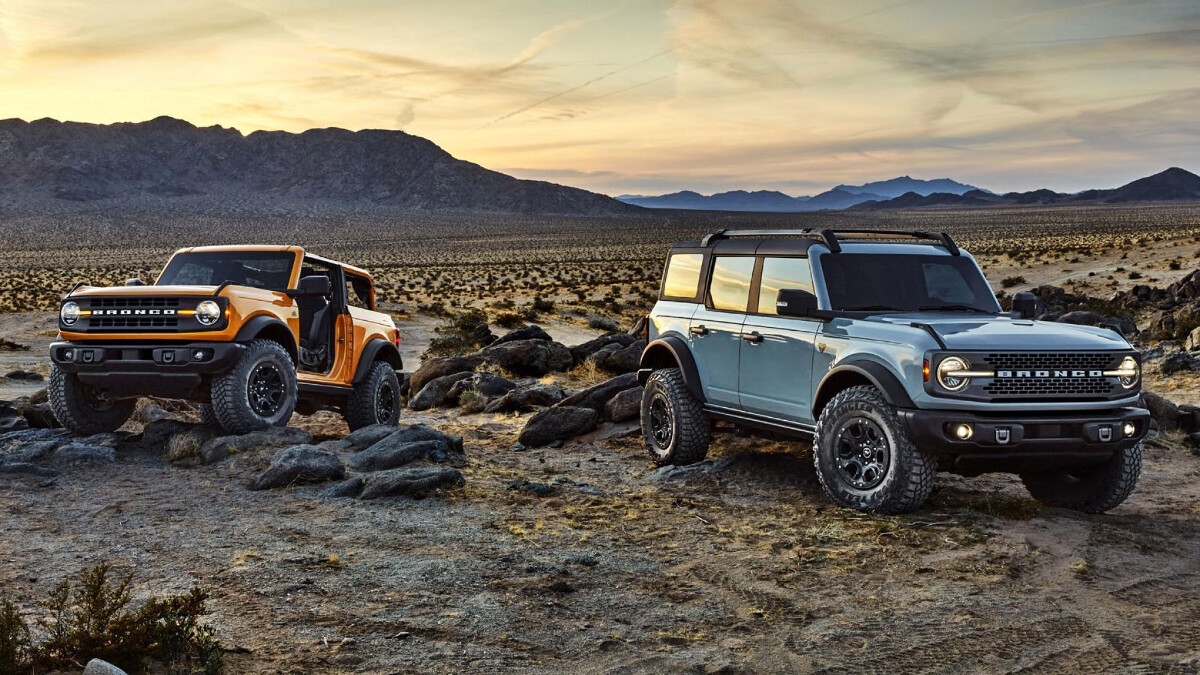 It’s much smaller than the hulking Broncos of the ’80s and the ’90s, but larger than the original, whose styling it draws from so heavily. Yet it incorporates pretty much everything Ford’s ever tried to achieve with the Bronco—so that’s the spate of rollovers off the cards, in case you were curious—and tries to do what the original did all those years ago: Beat that pesky Jeep.

Will it succeed? Well, the elements are all there... 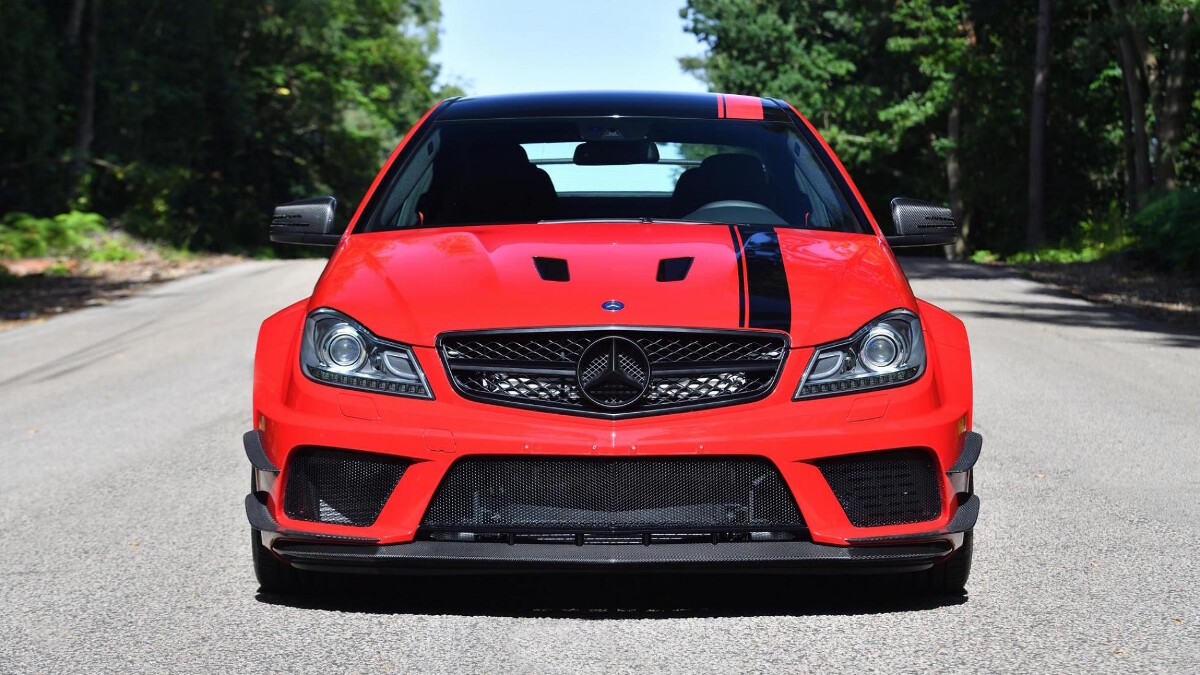 Gallery: The baddest of the Mercedes-AMG Black Series
View other articles about:
Read the Story →
This article originally appeared on Topgear.com. Minor edits have been made by the TopGear.com.ph editors.
Share:
Retake this Poll
Quiz Results
Share:
Take this Quiz Again
TGP Rating:
/20