* Intra-team rivalry is all the rage these days: McLaren newbie Sergio Perez denies that he has apologized to Jenson Button for his aggressive overtaking maneuvers during the Bahrain GP, but maintains that his \"relationship with Jenson is still okay.\" Says the Mexican driver: \"It was said in various publications that I apologized to Jenson, but it wasn\'t like that. I didn\'t apologize to him because I didn\'t think it was necessary.\" The pair has cleared things with McLaren, however: \"We apologized to the team because we risked a lot and we were both very aggressive.\"

* Having been criticized for his race-radio outbursts over Perez\'s actions in Bahrain, Button defends what he has said about his teammate in the heat of the battle. \"The problem with the radio is that my message is not meant for the masses--it\'s meant for the team,\" he explains. \"In a way, it\'s a pity that TV companies just choose the messages they want, because they can come across in the wrong way. I was obviously very angry, but the anger was supposed to be kept within the team because I am radioing the team, not the TV companies.\"

* Felipe Massa, meanwhile, is hoping to score good points when F1 heads to his teammate\'s home country in a week\'s time. \"The Circuit de Catalunya is the track we know best thanks to all the tests we do there at the start of the year,\" the Ferrari driver says. \"It\'s a complex, technical track where it\'s important to have good aerodynamic downforce.\" Expect more running on Friday practice because the teams have extra tires and will be trying out their first major car updates this season following the long break.

* 11th: The ultimate loser in F1 this year. For the past three seasons, teams finishing outside the top 10 have been awarded $10 million in prize money. But not only will the 11th-placed team be dead-last in the field this year, it will also receive nothing from the prize pot.

* 2015: The target for the inaugural staging of the grand prix in Thailand. That makes our Asian neighbor the third potential new F1 venue over the next two years, with Sochi (Russia) and New Jersey aiming to host a race beginning next year.

* 5.995km: The length of the proposed Bangkok circuit. The circuit will be built in the area of the Royal Thai Naval Dockyard, passing through attractions like the Grand Palace, the Temple of Dawn and the Victory Monument. Because the starting grid will be on the banks of the Chao Phraya River, floating grandstands are also being considered by the organizers.

* Some rubbish quotes floating around today I hear, good old spin job by someone... #outofdatequotes Have a great weekend :)))
- Mark Webber (@AussieGrit) slams the recent stories in which he is quoted to have said he shares a \"great camaraderie\" with teammate Sebastian Vettel.

* Enjoying a nice couple of days rest before the craziness all starts again... Cup of tea in hand & @jessybondgirl in the kitchen!! Perfect ;0
- Jenson Button (@JensonButton) enjoys downtime with his model girlfriend. Oh, the life of an F1 driver.

* Samurai...;))
- Fernando Alonso (@alo_oficial) seems to have run out of samurai quotes, so for now he\'s posting samurai photos instead. 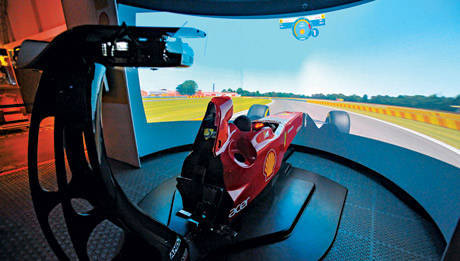 Behind Formula 1: Care to have your own race simulator?
View other articles about:
Read the Story →
This article originally appeared on Topgear.com. Minor edits have been made by the TopGear.com.ph editors.
Share:
Retake this Poll
Quiz Results
Share:
Take this Quiz Again
TGP Rating:
/20