With the EV1, GM could’ve been at the forefront of electrification

It’s the GM EV1. Or at least it was. Just so no one can accuse us of burying the lead, General Motors went ahead and crushed all but a handful of the 1,117 EV1s it produced. GM also bricked 99% of the ones it left uncrushed, leaving one in the hands of the National Museum of American History in Washington DC. The other decommissioned EV1s generally made it to universities and other museums. 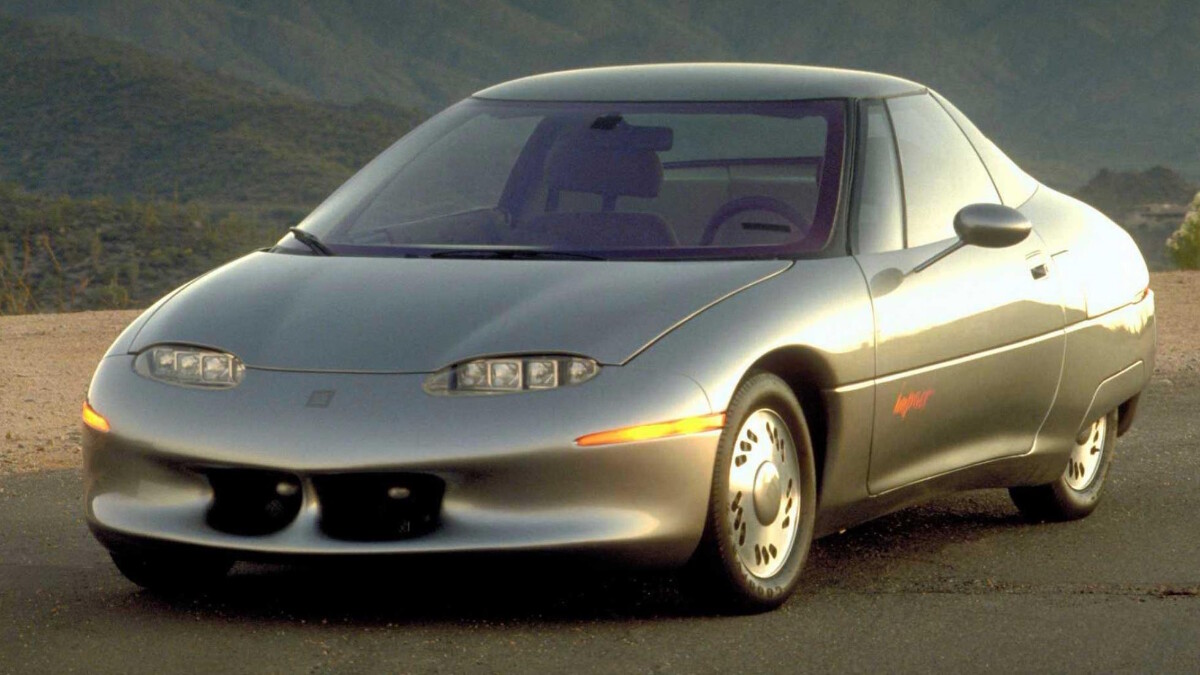 The EV1 was a lot of things. A response to a mandate by Californian regulators to increase the production and sale of zero-emissions vehicles. A production version of a really cool concept car called the Impact (pictured above) made for GM by a company called AeroVironment—whose usual business involves making military aerial drones—based on what it learned winning the World Solar Challenge for solar-powered cars. And the first foray into production electric vehicles since we all stopped wearing top hats. 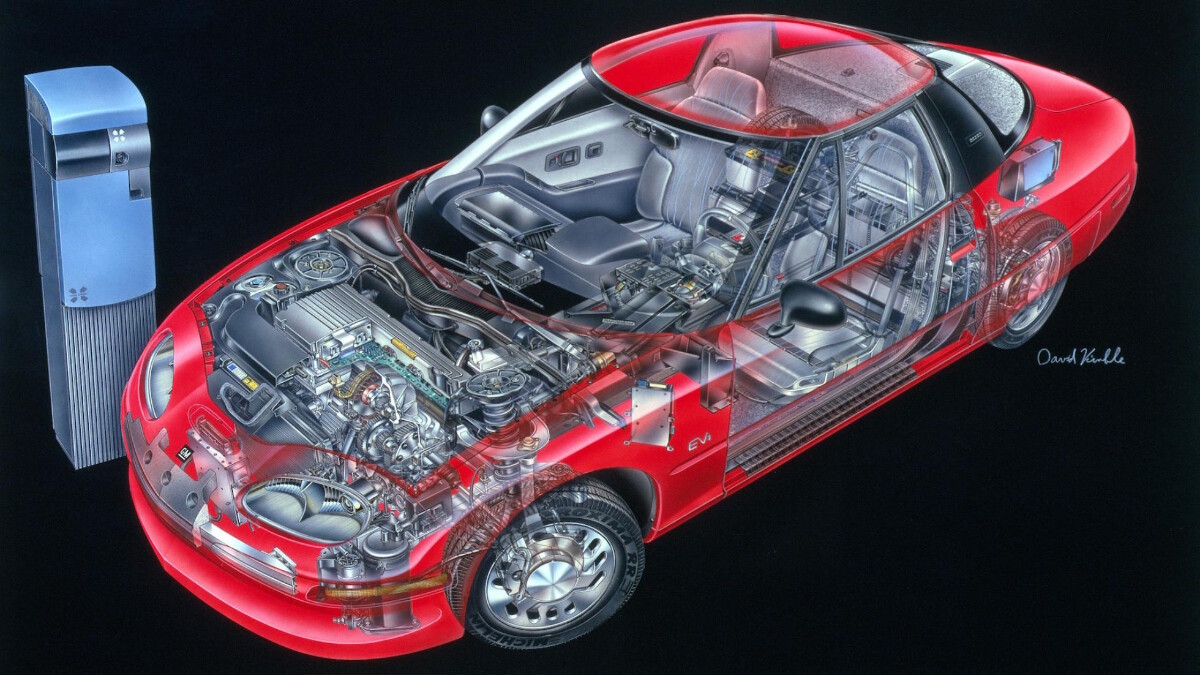 Some fairly cool stuff, to be honest—magnesium-alloy wheels, like a Lancia or racing Alfa Romeo from the glory days. It was built from aluminum and composites to keep the weight down to just 1,360kg, even with 26 heavy lead-acid batteries.

With the early models, if you absolutely feathered the go-pedal, you could get 160km from a full charge, but you’d more likely be looking at half that if you drove like, say, we do. Later EV1s got a better battery, with 190-225km of real range. This was thanks to a huge advance in nickel-metal-hydride batteries by a company that GM owned at the time, Ovonic Battery Company. And Nickel Metal Hydride is a battery technology that’s used to this day in hybrid cars.

It also used inductive charging panels, as opposed to the various plugs and pins we have to make do with these days. So, no need to worry about CHAdeMO or CCS or supercharging; just slip the paddle down the front of the car (every production EV in America had the same type) and Robert’s your father’s brother. 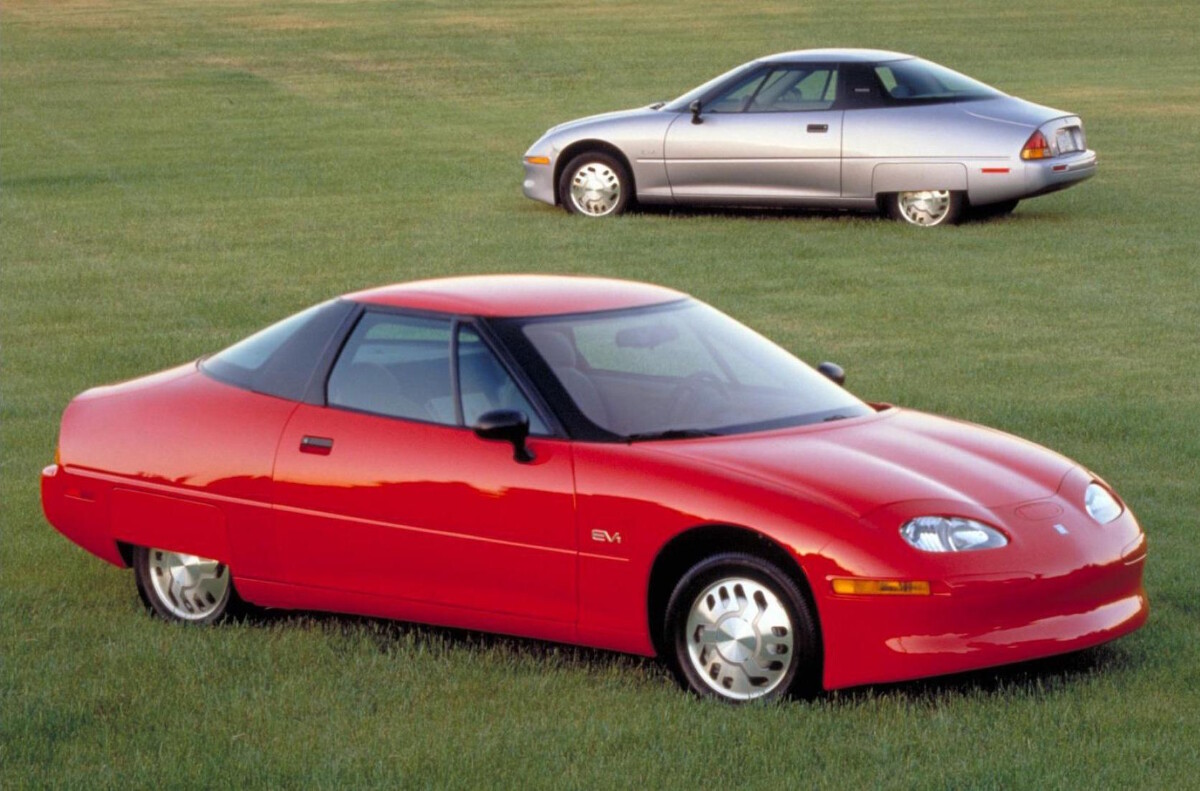 Actually, yeah. Especially considering it had just 137hp. Doubly especially, considering it was an electric car from the ’90s. Nil to 100kph was all over in about 8sec, which doesn’t sound like much these days, but it’s enough to outdo contemporary 3-Series and T5-powered Volvos. We’ve seen footage of the EV1 just abandoning an MX-5 off the line and scooping up a 300ZX in a standing-start drag race.

Even though regular production EV1s were limited to 128.75kph (80mph) from the factory, GM took the speed limiter off a prototype and reached 296kph (183.8mph). We did a few sums and found that, with 137hp, top whack is 266kph (165mph). This tells us two things: 266kph is still incredibly fast for just 137hp, and GM’s engineers turned the wick up a bit for the top-speed run.

This incredible turn of speed is mostly thanks to a drag coefficient of 0.19—what the Volkswagen XL1 would only just best by 0.01 nearly a decade later, and leagues ahead of pretty much every car you’ve ever seen in person. 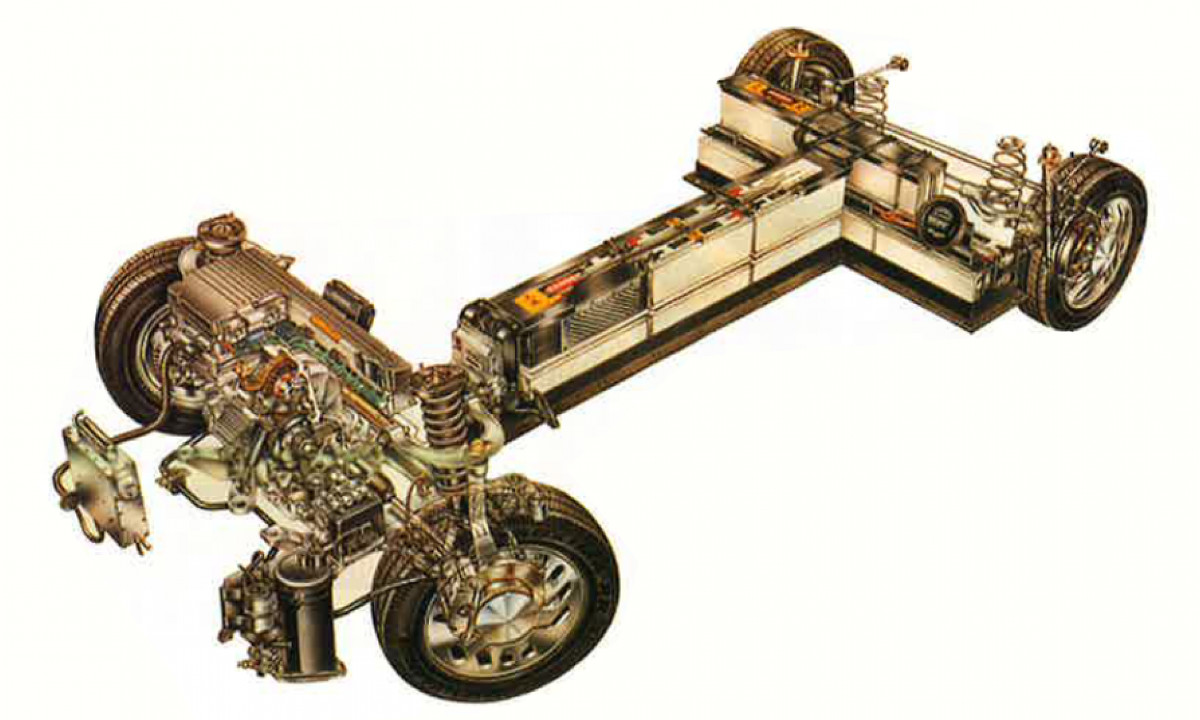 Not for GM, that’s for damn sure. The EV1 program apparently cost somewhere between 350 and 500 million freedom francs, which they absolutely did not recoup. It also wasn’t super cheap for drivers to lease, either, at around $500 per month. In the ’90s. And yeah, we said lease, which will become very important later on.

The actual sticker price was about $34,000 in the ’90s, which works out to about $60,000 (P2.89 million) when adjusted for inflation. That’s a decent stack of cash, but still less than a Model S. Which is obviously a very different kettle of fish, but since when has anyone you know actually put fish in a kettle? What a ludicrous idea. 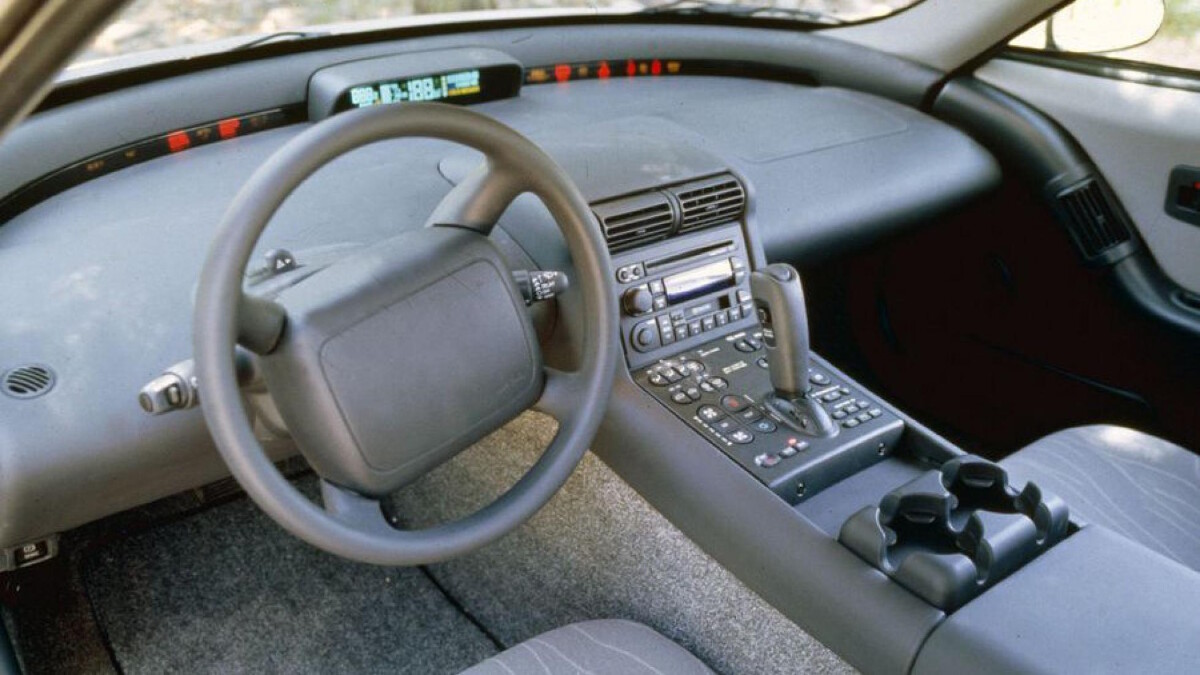 Um. Have we not just been doing exactly that for the past few hundred words?

Okay, then. Remember when we said only one EV1 is still working and in the hands of the National Museum of American History? Well, Francis Ford Coppola—yeah, director of all of your dad’s (fine, our) favorite movies—hid his EV1 away rather than hand it back to be crushed. He’s a massive car guy and EV fan—as well as a hell of a vintner, as it turns out. 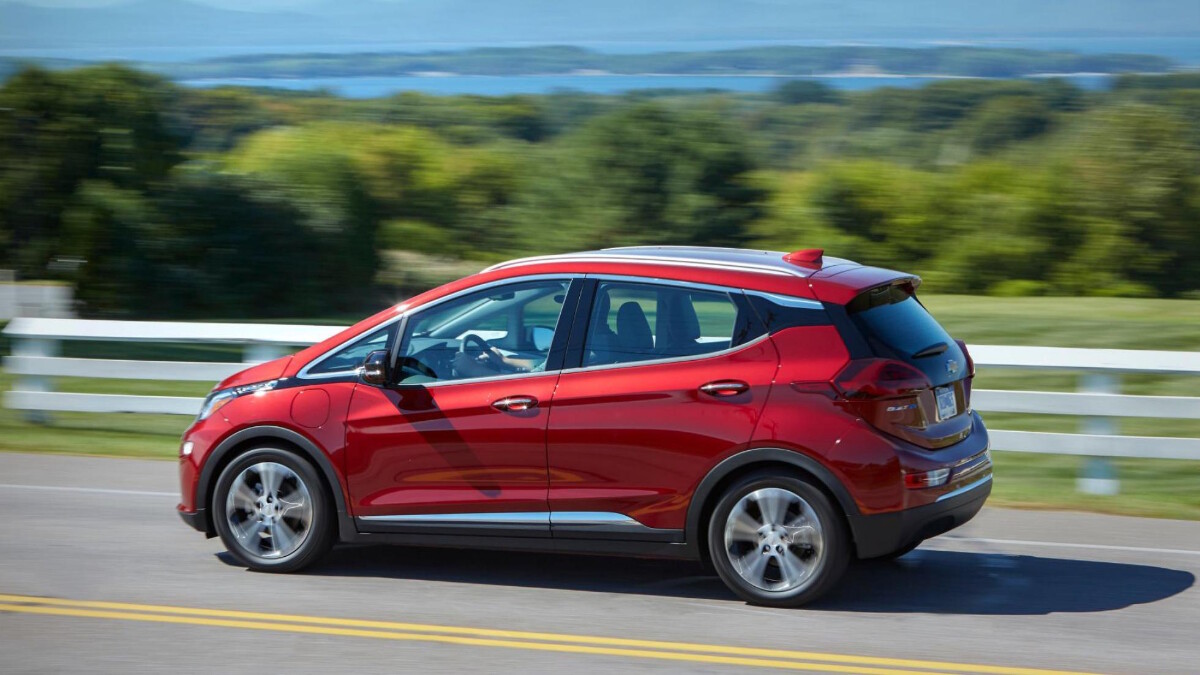 As of right now, just the one—the Chevy Bolt, a small electric hatchback that’s left-hand-drive only. It sells in the US, Canada, South Korea, and Norway.

The plan is for an electric SUV with a Cadillac badge this year, and the return of Hummer—yeah, that Hummer—as an all-electric division of GM. Do we even bother pointing out the irony?

General Motors “aspires to eliminate tailpipe emissions from new light-duty vehicles by 2035,” which it’ll follow through on if the tides keep pulling the way they have been, and won’t if those tides ebb. This announcement came on the heels of President Biden’s series of executive orders that prioritize climate-change action.

Why did the EV1 fail, and what did we learn from it?

GM lost money on every EV1 it made and didn’t see a profit for the model at any point.

The infuriating thing is that GM was actually really good at electric cars—in 1987, it won the World Solar Challenge in Australia with the Sunraycer (y’know, like sunray, plus race?). It also had a fully-electric car on sale in the ’90s, more than a decade before Elon Musk would release the Model S and wrongfoot the entire industry. It had willing buyers and lessees who picketed General Motors in California, trying everything they could to buy the existing 1100-odd cars and take on responsibility for their upkeep, giving up rights to warranty and spare parts. It didn’t work—GM crushed the cars (and, we’re guessing, the protestor’s spirits), anyway.

And we learned that we’re at least a decade behind where we should be with EV adoption, technology, and infrastructure. It’s easy to say that the EV1 was ahead of its time. But it wasn’t. It was a product of its time and the technologies available at the time. Lead-acid and even NiMH batteries had been around for decades, aerodynamics were no longer witchcraft, and electric motors were running everything from angle grinders to milk floats.

Just imagine if GM had thought beyond the short term with the EV1. Where would we be with electric cars? 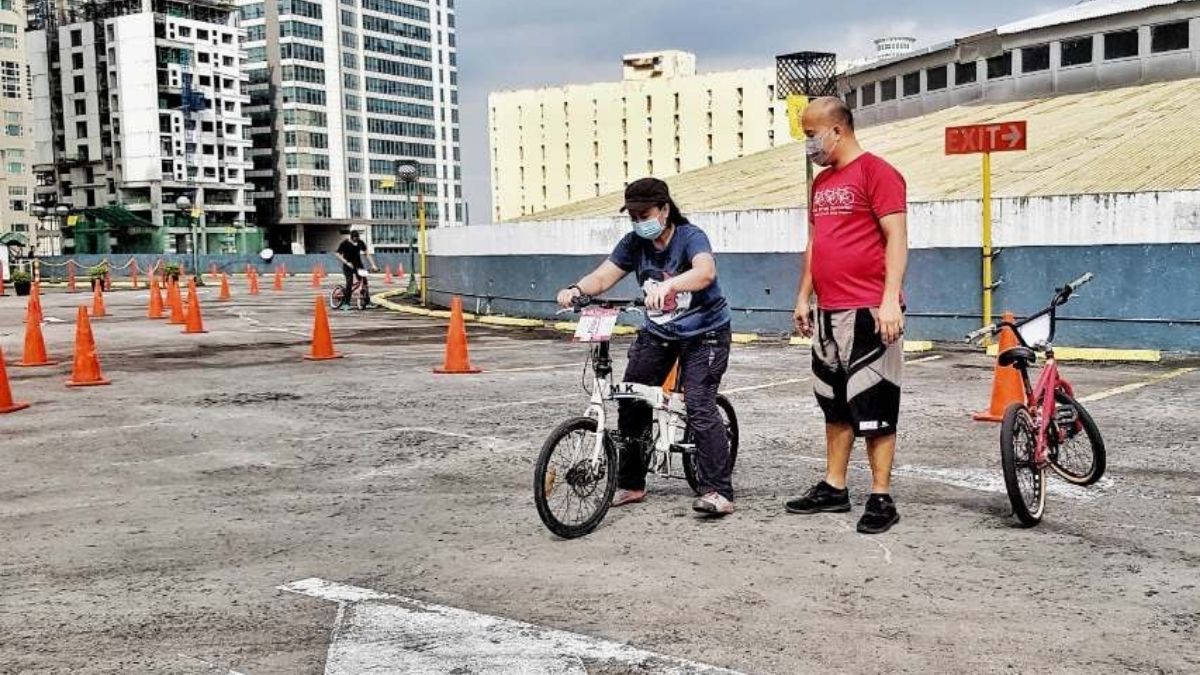 There’s a place where you can finally learn how to ride a bike
View other articles about:
Read the Story →
This article originally appeared on Topgear.com. Minor edits have been made by the TopGear.com.ph editors.
Share:
Retake this Poll
Quiz Results
Share:
Take this Quiz Again
TGP Rating:
/20