It turns out there are different types of road ragers

Even the best of us succumb to it once in a while
Oct 10, 2017
ADVERTISEMENT FEATURE BY Snickers
What is an Advertisement Feature?
Follow Snickers on

Given how terrible Metro Manila traffic is, it’s inevitable that you’ll lose your cool behind the wheel every now and then. And just like how no two people’s personalities are exactly alike, motorists have different ways of expressing their anger on the road. Which one of these are you?

1) The screamer. What better way to express your sudden burst of emotion than to let the whole world know about it? Shouting is a pretty common way to express one’s disdain for the standstill traffic and the idiocy of other motorists, and is a pretty clear sign that you’re blowing your top.

2) The pressure cooker. Not everyone expresses their anger at others by yelling in frustration. Others prefer the silent treatment, where they turn a cold shoulder on the offending party. In driving terms, you’ll often notice the driver gripping the steering wheel a bit tighter, his eyes getting narrower, and his vocal output becoming less and less. Eventually, the only noises he makes are grunts and the gnashing of teeth.

3) The caged racer. When some motorists get peeved, they take it out on the road—literally. They suddenly fancy themselves to be Formula 1 drivers, attempting to weave around other cars. Hell, they’d drive through other cars if repair work wasn’t so expensive.

4) The honker. Honking is the vehicular equivalent of calling someone’s attention. But when some drivers snap, they get very shouty with their car horns. They honk long and hard, and if they keep at it long enough, they’ll either run out of battery or smash their hands straight through the steering column.

5) The sleepyhead. This driver looks tired and physically drained from being stuck in traffic, but is really raging inside. Don't mess with this ticking time bomb.

The fact is, Filipinos experience some of the worst traffic conditions in the world. It’s hard to gauge an average estimate of the daily commute—some days it takes 45 minutes, and other days it’s practically the flight time from here to a neighboring country. And if you have to endure this on an empty stomach, the anger and the frustration gets much worse.

When this happens, grab a Snickers. You’re not yourself when you’re hungry, and the same goes for your temper. So grab a quick bite, cool off, and just keep in mind that you’ll eventually reach your destination. 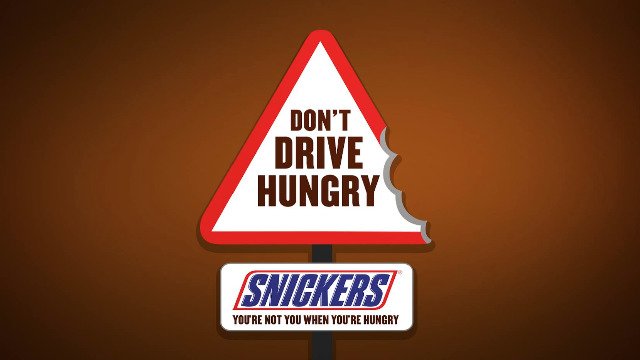 And while you’re at it, make the most of your traffic predicament and join the Snickers Don’t Drive Hungry Promo. Take a screenshot of your navigation ETA and post it on the Snickers Facebook page—before hitting the road, mind you. If your time matches the one posted by the admin on that day, you become eligible to win exciting prizes from Snickers during the weekly draw.

This article is created by Summit Storylabs in partnership with Snickers.
Shop the items in this story!
More From Snickers
Read the Story →
Share:
Retake this Poll
Quiz Results
Share:
Take this Quiz Again
TGP Rating:
/20