From a pool of good pickup genes
May 22, 2012
CAR BRANDS IN THIS ARTICLE 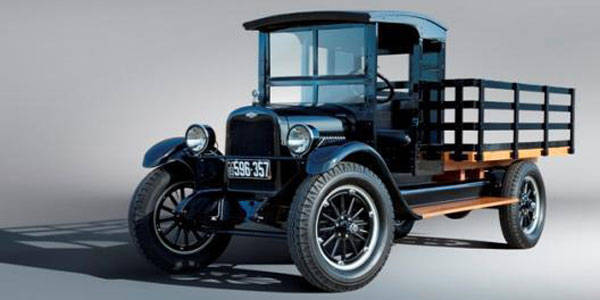 We know you've all been waiting for Chevrolet's handsome pickup, the Colorado. While we all play the waiting game, let us share with you a bit of its history. To be more specific, let us introduce you to the Colorado's proud ancestor, the Series 490 Light Delivery chassis cowl.

Chevrolet introduced its very first pickup model, the Series 490, in 1918. Yep, that's the vehicle in the photo above. Obviously, it looks many generations away from the American carmaker's current pickups. It was powered by a 2.8-liter four-cylinder engine and had a top speed of--drum roll, please--50kph.

Needless to say, Chevrolet needed to evolve its pickup. Hence came the special-edition Cameo Carrier in 1955. Through this vehicle, smooth rear fenders appeared for the first time on a mainstream pickup. This essentially gave the truck a flowing, upscale appearance--a far cry from the traditional “step-side” design of other pickup trucks of the time. And within a few years, the smooth cargo bed sides (“fleetside” styling, as they were called) were found on virtually every truck on the market.

In the 1960s, Chevy trucks had a broader and longer look compared to its competitors. They were also the first to have an independent front suspension that offered better ride and handling quality.

Fast-forward to the present and Chevrolet introduces the all-new Colorado, a midsize pickup boasting nearly a century of truck heritage. The Colorado is propelled by new Duramax 2.5- and 2.8-liter engines that, Chevrolet claims, are designed for optimum power and torque.

These Duramax engines are made at Chevrolet's new and state-of-the-art $200,000,000 engine power plant in Rayong, Thailand. Said engine plant has fully-automated, computer-guided sequence for gauges, and employs lasers for high-level precision. It is capable of producing approximately 120,000 engines per year.

Chevrolet's version of the pickup has certainly gone a long way from the bare-bones simplicity of the Series 490 truck. You will see that version in the metal very soon. And you will read about it here first. Meanwhile, here's a made-for-PR photo of the world-class Colorado.

Michael Schumacher's house has its own vintage Shell fuel pump
View other articles about:
Recommended Videos
Read the Story →
This article originally appeared on Topgear.com. Minor edits have been made by the TopGear.com.ph editors.
Share:
Retake this Poll
Quiz Results
Share:
Take this Quiz Again
TGP Rating:
/20