For EDSA to be pedestrian-friendly, these 10 areas need an overhaul

Most people living in Metro Manila have a love-hate relationship with the city (but probably more hate). Public transportation can be a problem, especially when you have to ride the train or a bus every single day, and car-centric road designs make life even harder for pedestrians.

While some parts of the capital are slowly improving, there are still some areas that need attention. We round up 10 spots along EDSA that need a whole lot of improvement. 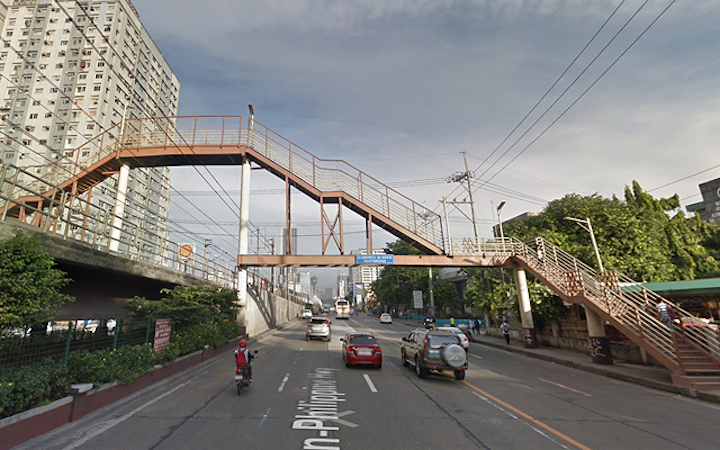 Back in November 2018, an extremely high footbridge soaring above EDSA some distance past the GMA–Kamuning Station drew flak for...well, being extremely high. Not to mention that the Metro Manila Development Authority (MMDA) project cost a whopping P10 million. It’s so steep that seasoned hikers pretend that it’s another ‘summit’ to conquer called ‘Mount Kamuning.’ 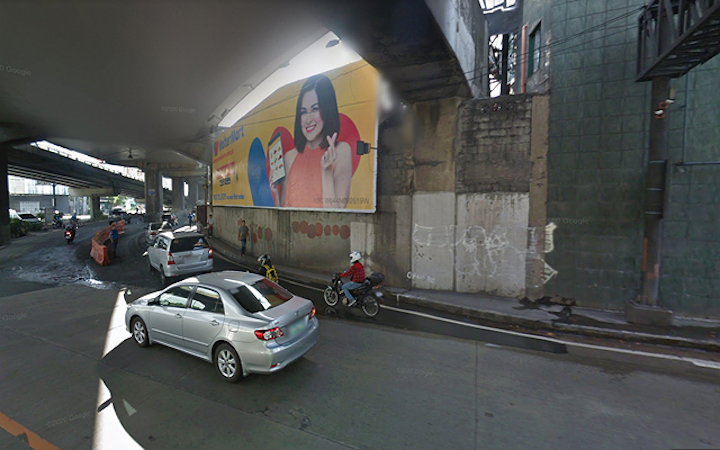 Under the Kalayaan Flyover on the northbound lane of EDSA is a sidewalk so narrow that pedestrians sometimes have no choice but to walk on the road and try not to get hit by cars turning right. It doesn’t help that Kalayaan Avenue is residential, and people need a safe walkway to get to EDSA. 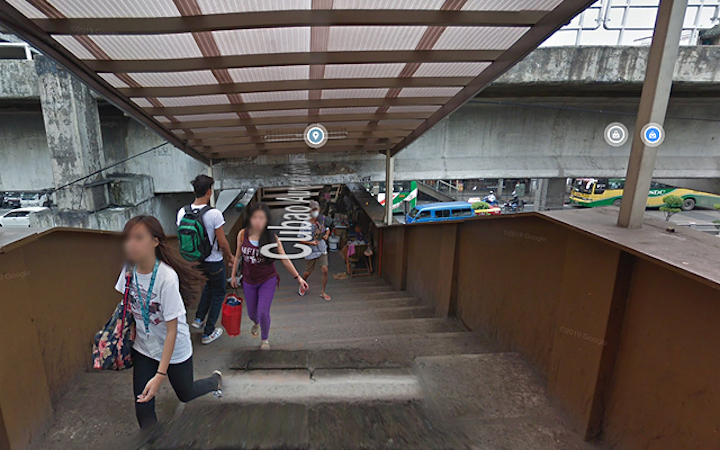 The square-shaped footbridge on the corner of EDSA and Aurora Boulevard is a huge help for pedestrians on that busy side of the metro. But it’s also one of the few walkways with a dip in the middle, which makes you walk right under the concrete railway of the LRT-2. Getting stuck in there in the middle of an earthquake (or some other natural disaster) could become a scene right off Final Destination. 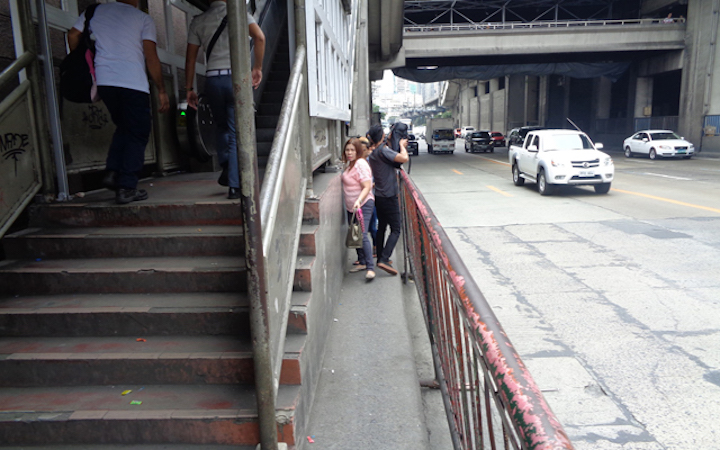 You know what we’re talking about. Somewhere in Ortigas, there’s a sidewalk that’s mostly occupied by an elevator leading to the Ortigas MRT station. What’s left is a small passageway that’s made even narrower because of the fence separating the ‘sidewalk’ from the rest of the road. Only one person at a time can fit, and even then, you have to squeeze through the side of a cemented staircase and the metal barricade. 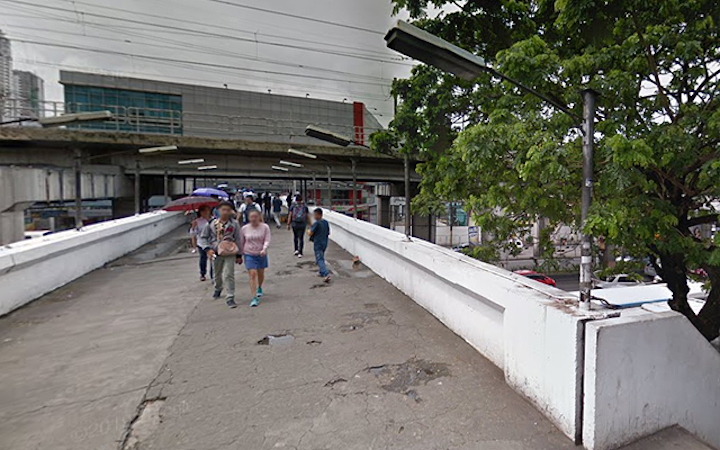 EDSA has some of the most inconsistent footbridges in the metro. Some are made of metal, others are made of concrete; some have metal fences and roofs, others are just bare. And the concrete ones could definitely use some repair, such as the footbridge in front of Starmall and SM Megamall. Parts of it already have holes that form puddles especially in rainy weather, leaving less room for pedestrians to pass through.

It’s a photo you can smell. People passing through this sidewalk in Guadalupe not only have to squeeze between a concrete post and a metal barricade, they also have to try not to breathe unless they want to inhale the smell of piss. 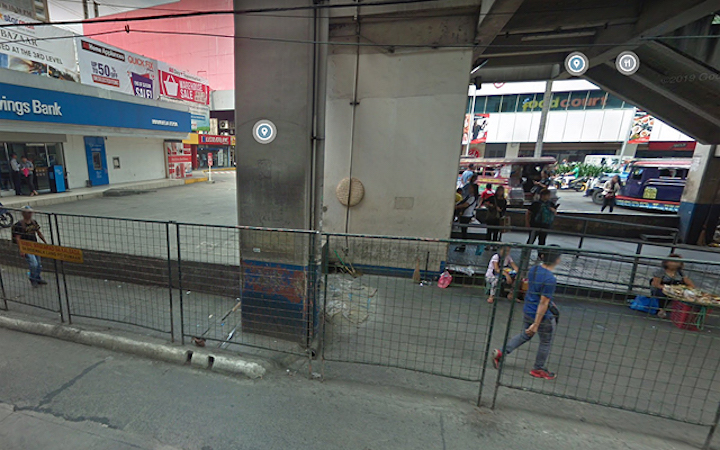 Right in front of a mall in Crossing is a sidewalk that would make Super Mario proud. One part of it is semi-blocked by a huge concrete post under the Shaw MRT station, while the other is an elevated platform that makes up the parking space of a bank. So, pedestrians can either deal with the one-way traffic or jump up the platform and go down on the other side. There’s also a small three-step staircase going up that parking space, which PWDs may have a hard time climbing. 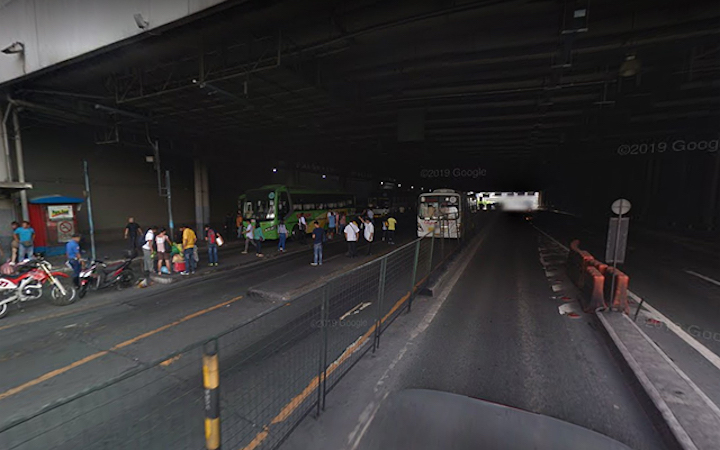 Have you ever tried to wait for a southbound bus under the Ayala MRT station? It’s hot and dark, and it smells funky. Plus, the fumes coming from the buses—which are almost always full by the time they reach Makati during rush hour—are the opposite of what you’d want to experience on a warm sunny day. 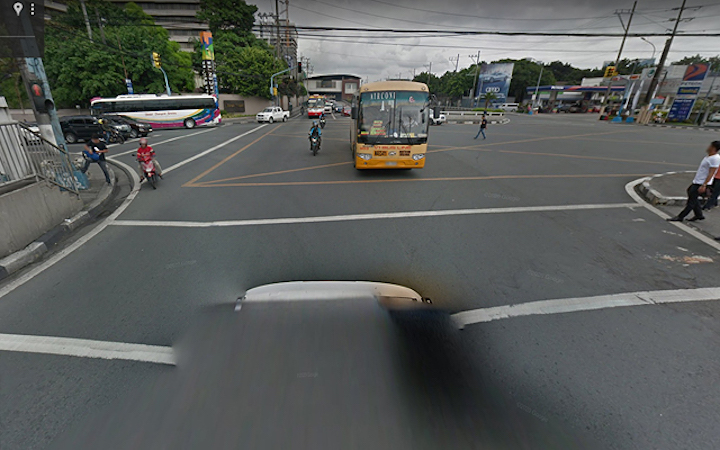 Pedestrian lanes are supposed to connect one sidewalk to another, but the one at the corner of EDSA and Arnaiz Avenue is a bit tricky. If you follow the white borders, you end up on an elevated sidewalk you won’t really be able to climb because it has a metal fence. So, you have to walk a bit further down and just pray that there’s no speeding car turning right at the same time.

The main image above shows only a small part of this area. Aside from dealing with narrow sidewalks, a run-down overpass on that side of EDSA, and dark walkways, pedestrians will find crossing the street in Crossing (pun intended) pretty stressful because it has about a bajillion street lights—almost one for every lane, and most of the time, they don’t match. One street light tells you to walk, but the other doesn’t—and that’s just for one lane. Sometimes, too, traffic enforcers signal you to cross the road even if the street light says otherwise. #buwisbuhay 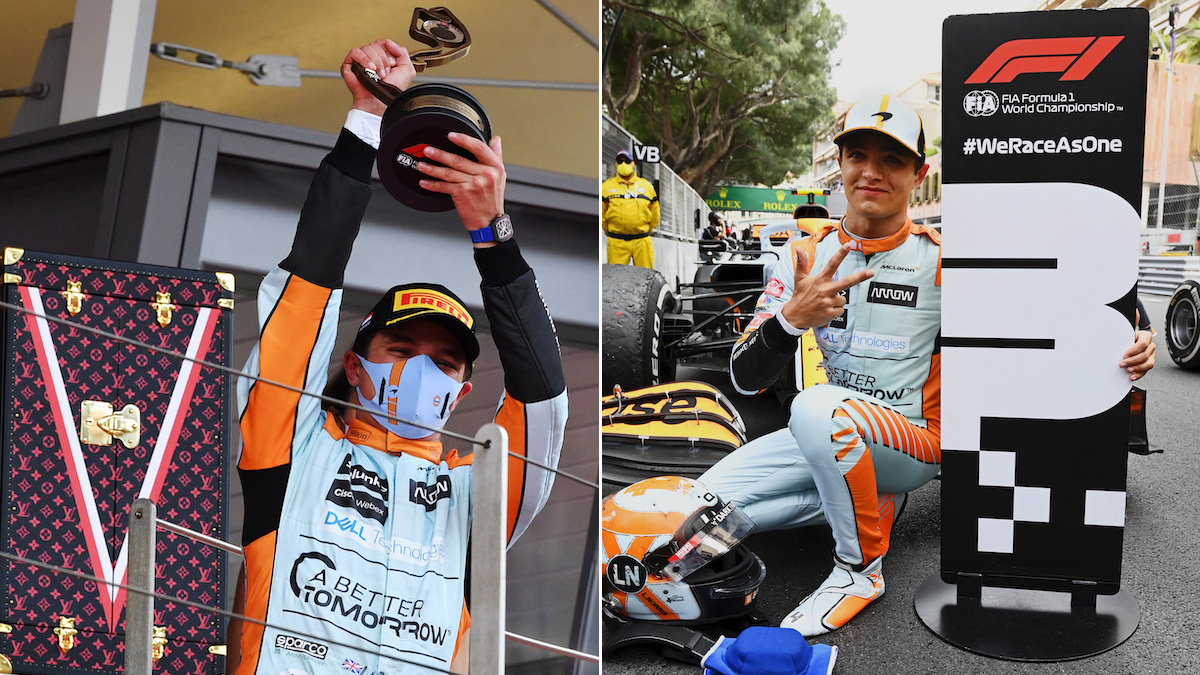 Lando Norris is looking more and more like a future Formula 1 champion
View other articles about:
Recommended Videos
Read the Story →
This article originally appeared on Topgear.com. Minor edits have been made by the TopGear.com.ph editors.
Share:
Retake this Poll
Quiz Results
Share:
Take this Quiz Again
TGP Rating:
/20