We crunch the numbers
by Ollie Kew | Aug 8, 2020
CAR BRANDS IN THIS ARTICLE

The Aston Martin Valkyrie and the Gordon Murray Automotive T.50 attack the thorny problem of ‘building the ultimate supercar’ from completely opposite poles.

The Murray T.50, meanwhile, is adamantly not a racing car with number plates. Like its spiritual father, the McLaren F1, it deploys F1-blooded tech: ground-effect aero, carbon construction, and that central driving position, but it’s an old-school driver’s car in setup: low mass, no big wings, and a manual gearbox, because that’s ex-Brabham and McLaren designer Gordon Murray’s cup of tea.

Where their Venn diagrams overlap is in the engine department. Both companies knocked on the door of British auto engineering firm Cosworth seeking a naturally aspirated, lightweight, and power-dense V12. Two spectacular-sounding powerplants have resulted.

Neither the Valkyrie nor the T.50 is finished yet, so while we wait, join us for a spot of number-crunching. Got a favorite? 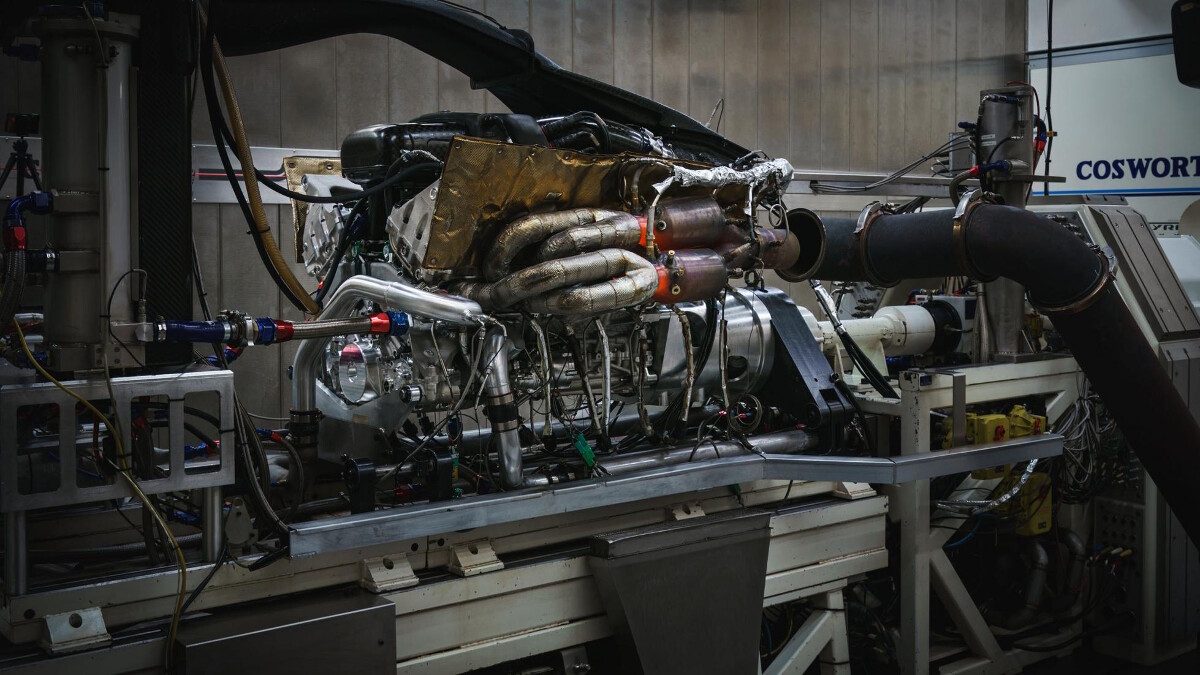 The Aston’s engine is dominant here: A 6.5-liter powerplant, its displacement dwarfs the T.50’s 3.9-liter engine. Well, Gordon Murray Automotive (GMA) calls it a 3.9-liter, anyway. It actually displaces 3,994cc, so by our reckoning, that’s a 4.0-liter.

While Murray desired a small-capacity V12 inspired by the 3.3-liter V12 found in the nose of the Ferrari 250 GTO, big-capacity V12s have a storied history in Aston Martin lore.

Indeed, it was even mooted to use a weapons-grade version of the Aston One-77’s 7.3-liter Cosworth V12, but the decision was made to go bespoke because the old warhorse, good for 750hp way back in 2009, wouldn’t have produced enough power. Speaking of which... 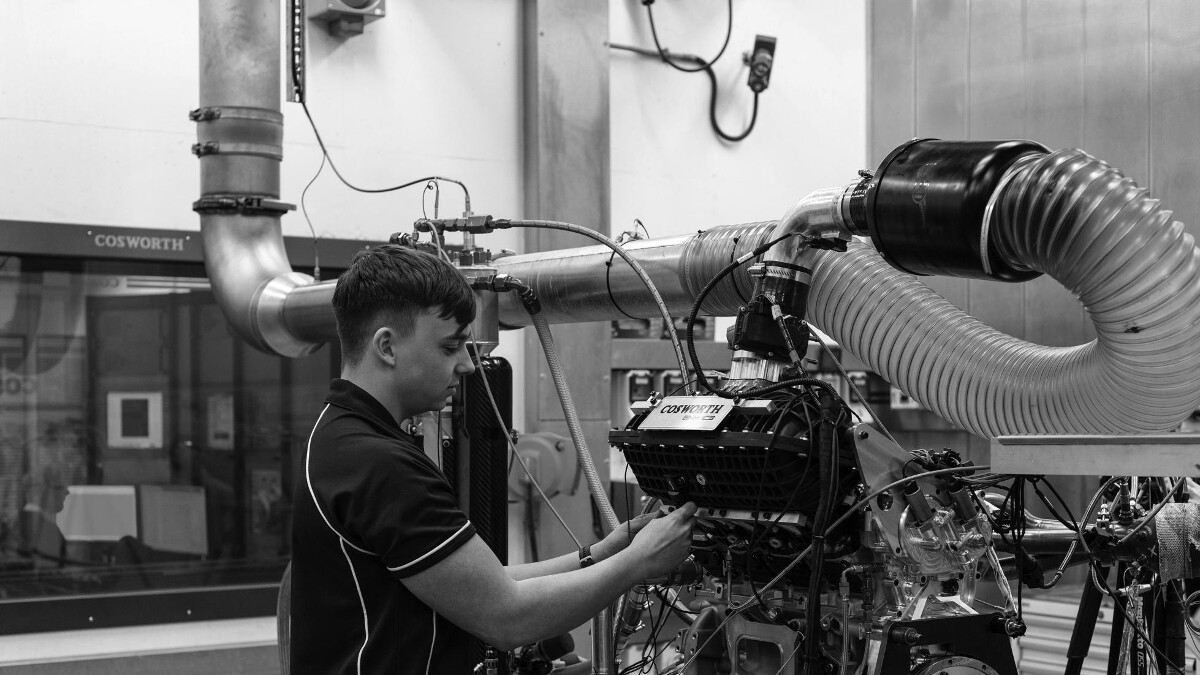 It’s no surprise that the Valkyrie’s 2.5-liter-bigger engine serves up more horses. We’re told the engine itself develops a nice, round 1,000hp, while its supplementary e-boost hybrid element contributes 160hp. So, 1,160hp all in.

Meanwhile, the Murray T.50 will ‘make do’ with 653hp, though it, too, has a trick up its tailpipes. A 48V starter-generator is bedded into the block, doing away with a starter motor, which is only used when you turn the key. GMA says that in Vmax mode, the T.50’s integrated e-motor adds 50hp. Unlike the Valkyrie, there’s no rumor of a modest electric-only range.

And because of the ram air effect from the overhead snorkel intake, the T.50 will (like the McLaren F1) actually develop more power when it’s going quickly, because of how much air is being forced into the hungry V12. It’s for that reason that, when Le Mans winner Andy Wallace Vmax’d the McLaren F1 on March 31, 1998, McLaren engineers disconnected the rev limiter, because the computer was stopping the engine from spinning as fast as it could once the speeds got blurry. 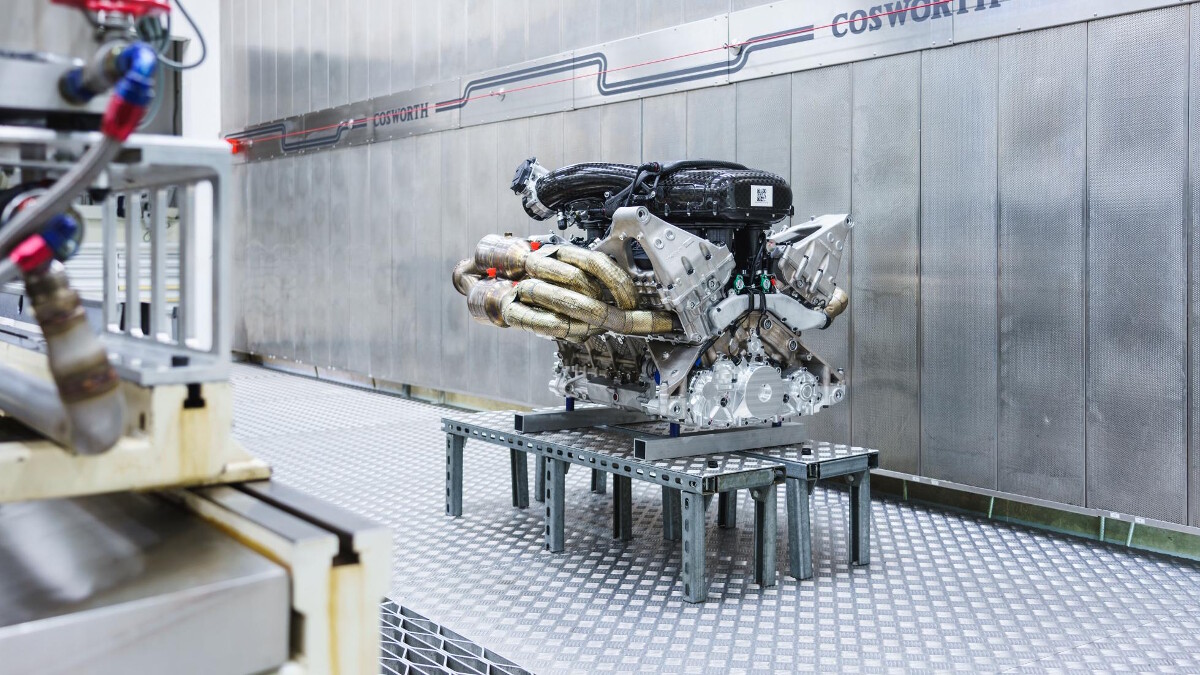 Forget what you know about high-revving car engines. Think a Honda S2000 or a Lexus LFA is a screamer? Puh-lease. You ain’t heard nothing yet.

The Aston’s V12 started the bidding with promises of 1,000hp at 10,500rpm, and an ultimate redline of 11,100rpm. And we all thought, ‘Yep, that’s as fast as a road engine can spin without distributing expensive bits of metal liberally around your entire postcode.’

Good battleground, this. It’s all very well forging a V12 out of raw unobtanium and demanding that it rev from zero to eleventy-stupid in the blink of an eye, but it’s not much cop if the result is so peaky that it eats a fresh clutch at every zebra crossing. So, Aston Martin and GMA have demanded that their respective V12s have plenty of low-down grunt, as well as top-end zing.

You’d expect the Aston’s much bigger engine to develop more torque, and you’d be spot-on. Peak torque is 740Nm—more than what a twin-turbo Mercedes-AMG C63 S produces. But with electric boost on board, that’s a given. And when you add the e-boost’s values, you’re looking at a grand total of 899Nm, through just the rear wheels. Better have those tires warm, boys and girls—the Valkyrie has considerably more torque than a Lamborghini Urus, but weighs about half as much. Gulp. 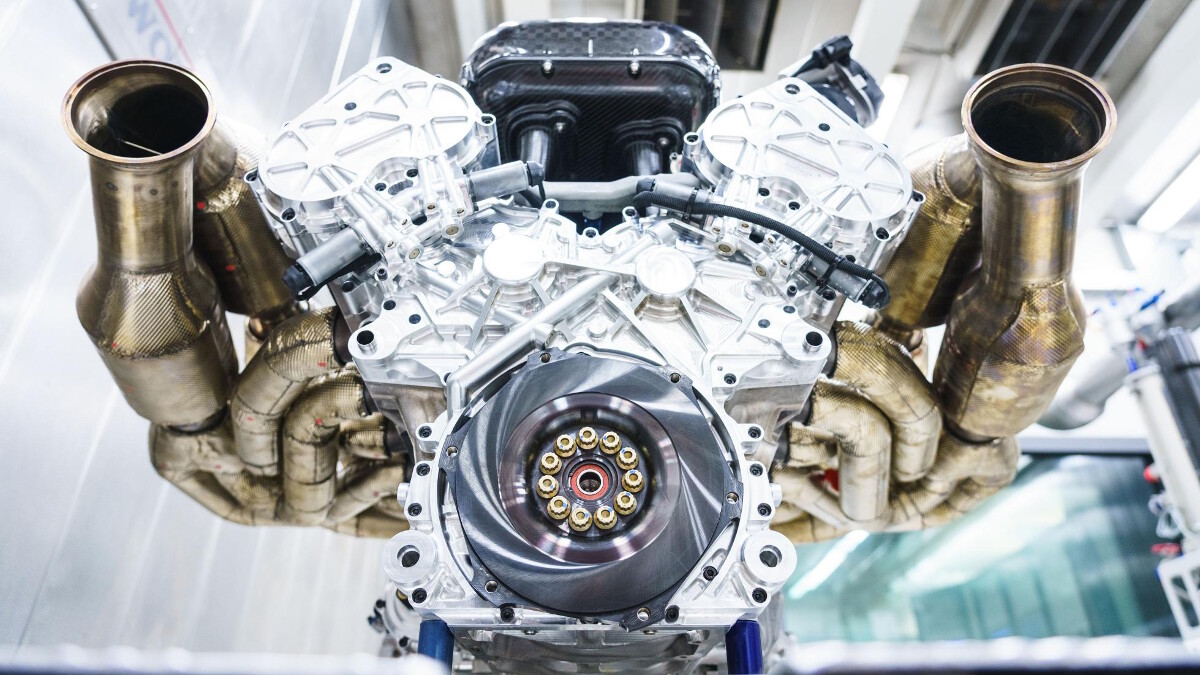 The ultimate V12 engine can’t be a ruddy great heavyweight—it needs to be impossibly light, too.

You need some context? Okay: The BMW V12 at the heart of the McLaren F1 weighed in at 266kg. Now, Murray had originally specified the engine was to weigh no more than 250kg, so why did he let BMW off the hook when it blew the limit by 16kg? Because of the titanic power. He’d only asked for 550hp. BMW gave him 627hp instead—or 2.35hp per kilo. 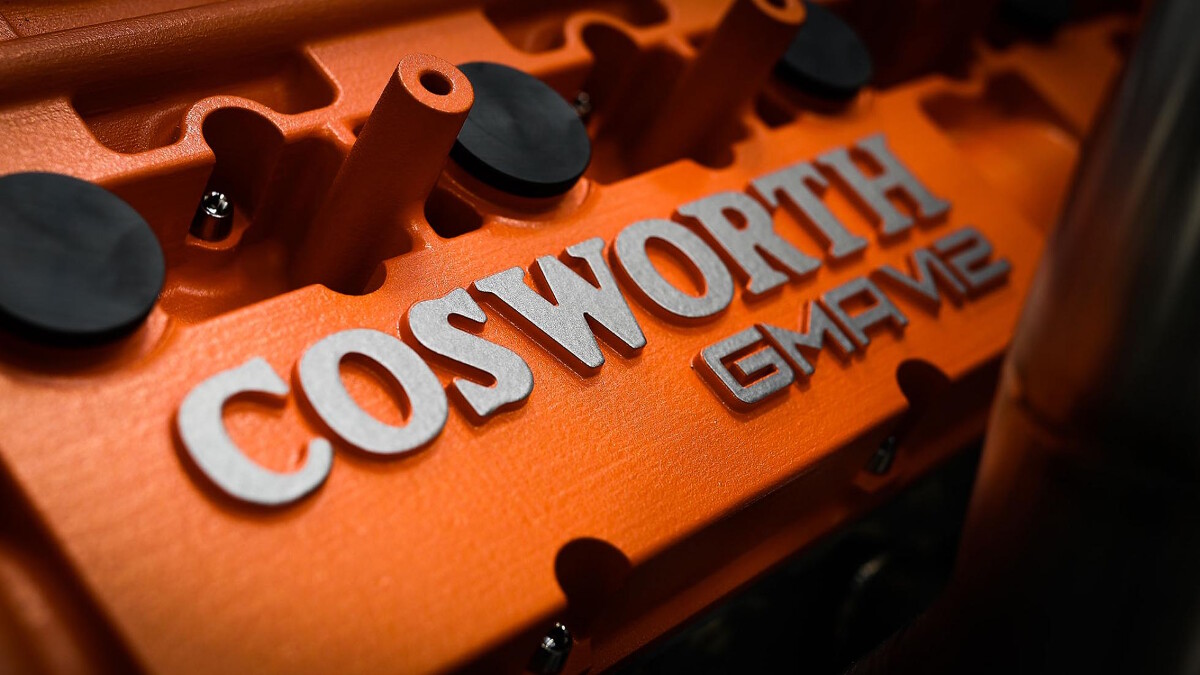 Ooh, we’re getting nerdy now. This is where we digest just how on-the-limit these gods of internal combustion engines truly are. The Aston’s equation (1,000hp/6.5 liters) equals 153.8hp per liter of capacity: a phenomenal achievement.

Consider that a car as bonkers as the Ferrari 812 Superfast develops a mere 121hp per liter and you get a sense of just how mighty the Valkyrie’s V12 is. Again, we’ll add the hybrid booster separately: 1,160hp per 6.5 liters equals 178hp per liter. Theoretically, if this mad machine was hit with a shrink ray and morphed into a 2.0-liter hot-hatch engine, it’d have 356hp.

In raw internal-combustion terms, the Murray T.50 arguably pips it. By generating 653hp from 3.9 liters (ish), it equates to 167hp per liter. And that, ladies and gentlemen, is a world record for a road-going engine (let’s not get bogged down in hybrid caveats and what-aboutery just now). 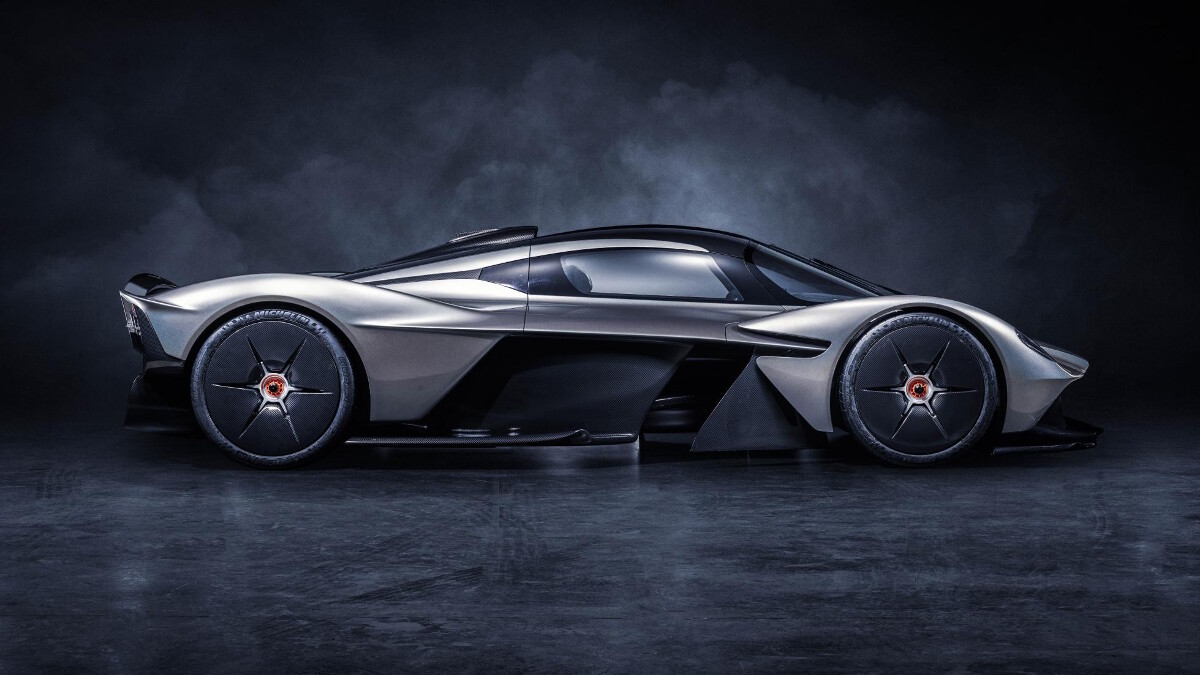 By which we mean: Is the engine actually a stressed member, like in a racing car? In the Aston, it is—the rear suspension is fitted directly to the engine block and the gearbox casing. GMA hasn’t quite gone down that road, because of refinement and comfort. The T.50 still has suspension mounted to its engine/gearbox, it’s just rubber-bushed. There’s no real rear subframe, though, so the engine assembly is fully integral to the car’s core. 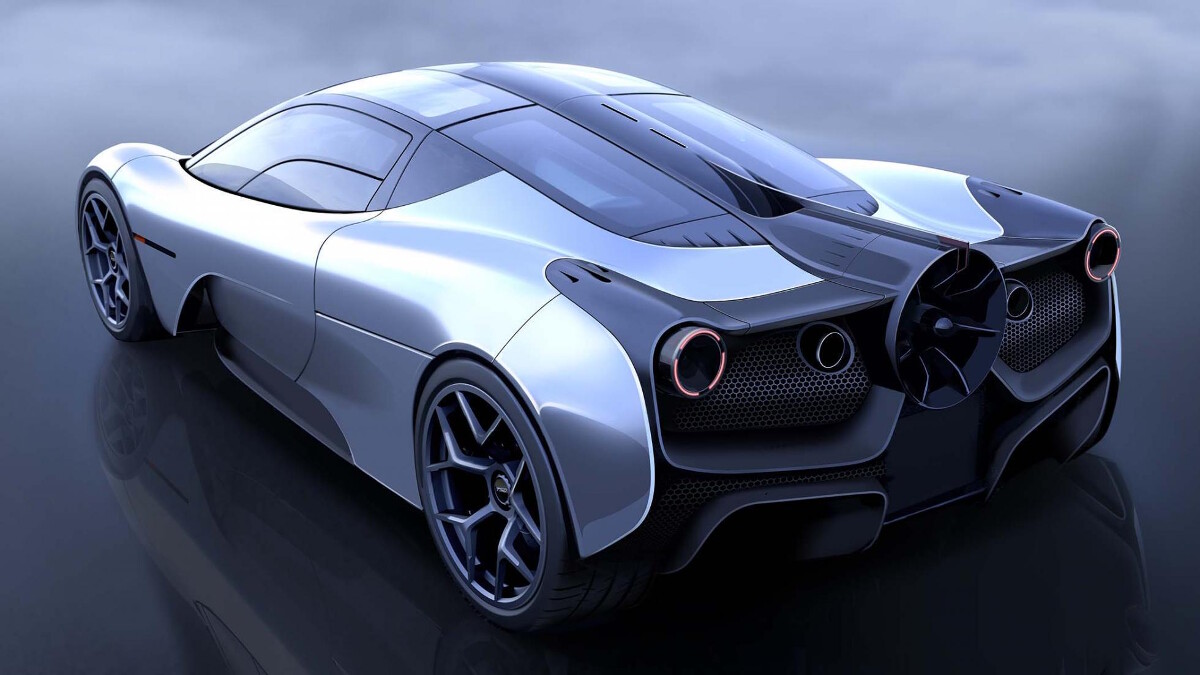 Chalk-and-cheese philosophies here. The Valkyrie, fittingly for a road-legal F1 car, is a dedicated paddle-shifter. It’s a Ricardo single-clutch gearbox, which had to be made especially for the Valkyrie because no existing gearbox was small enough to fit in the chassis without ballsing up Newey’s precious airflow. There’s no reverse gear, because the car’s hybrid motor will take charge of going backwards instead. Clever stuff.

The T.50 worships at the altar of the six-speed manual. The Xtrac ’box weighs 80.5kg, and it’s teeny, also for reasons of ground effect. The shift quality will be signed off by Gordon Murray himself. The T.50 project did dabble with the idea of a sequential transmission, but customers lobbied Murray to change his mind and plump for an H-pattern manual with a clutch pedal. Phew. 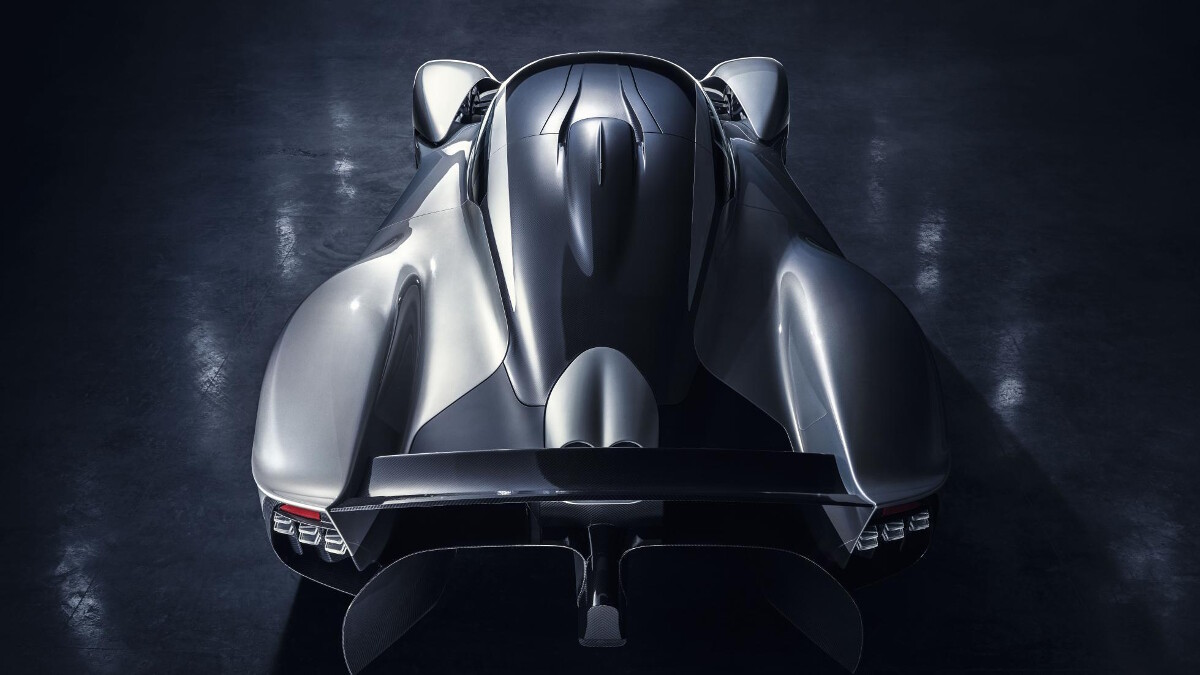 These cars are all about the crazy details—the monumental hurdles their engineers have to vault that’d never be on the radar of a team setting up a normal sports car. Where to start?

As if getting Cosworth to build the most power-dense, lightweight road-going V12 wasn’t enough, Murray also insisted thatthe engine had to be bite-the-back-of-your-fist gorgeous. That’s why it has no belt drives, and all the ancillaries are tucked out of sight. Only the heads of the engine block, the exhaust manifolds, and the inlet trumpets ‘take center stage.’ And what a stage, too: The engine will sit in a ‘viewing gallery,’ deep in the car’s midriff, under clamshell covers.

It’s even beautiful in ways you’ll never see. The crank, for instance, lies just 85mm from the base of the engine—lower even than the McLaren F1’s crank, which sat 125mm from the V12’s bottom. It’s made from steel and weighs just 13kg.

Special mention to the rear number plate, which has to be made of heat-resistant metal. What’s that got to do with the V12? Because the plate sits next to the exhaust, which sears up to 800 degrees Celsius at full chat. Ouch. 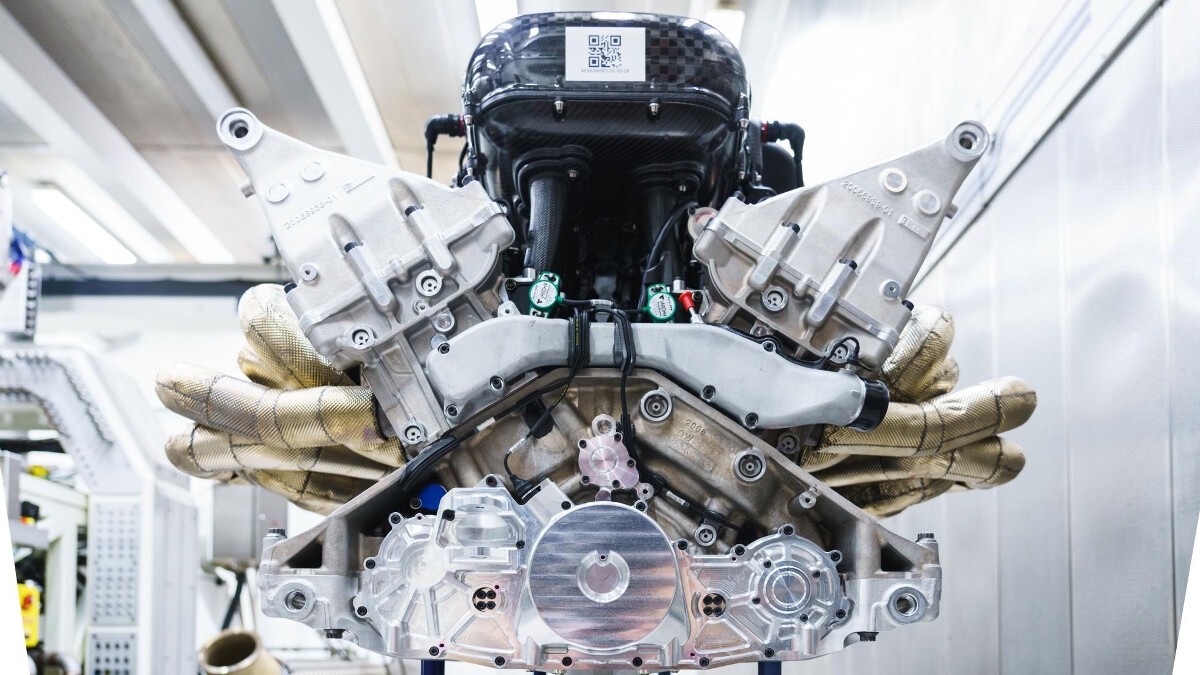 So, two very singular engines for different applications in potentially iconic cars. But they both think they’re number one.

Aston Martin says “the new V12 had to satisfy a simple, yet extraordinary brief: to create the ultimate expression of the internal combustion engine. Evoking the spine-tingling, ultra-high-revving F1 engines of the ’90s, but benefitting from two decades of progress in design, material, and manufacturing expertise, the Aston Martin Valkyrie’s 1,000hp V12 is a masterpiece, from one of the world’s most illustrious engine builders: an internal combustion engine without peer for a hypercar without precedent.”

Undaunted, Gordon Murray Automotive heralds its V12 as the greatest road-car V12 ever made. It proclaims the engine “combines the immense experience of Cosworth and Murray to be the most engaging, characterful, and driver-focused V12 engine ever produced.”

Murray himself tells Top Gear: “The bit I don’t understand [is] how [Cosworth plays] off injection against torque with ignition timing. And my goodness, the thermal side of the engine is so clever. Cosworth must be the best engine company on the planet. There’s nothing in common with the Valkyrie V12—this is really the next generation on.”

Our verdict? Our puny minds just feel lucky to live in a world where designers and engineers still seek to push the boundaries like this, purely in the name of driving thrills. Frankly, the only sensible option is to have one of each. Anyone know this week’s lottery numbers? 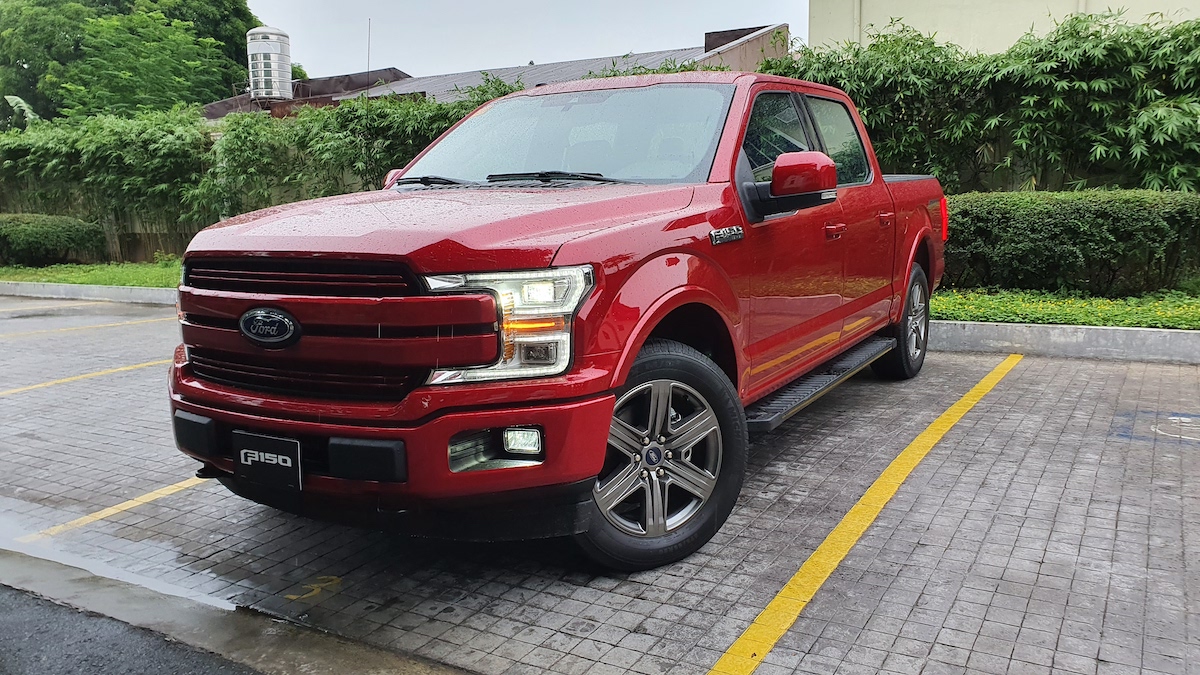 Is there a place for the Ford F-150 in the Philippines today?
View other articles about:
Read the Story →
This article originally appeared on Topgear.com. Minor edits have been made by the TopGear.com.ph editors.
Share:
Retake this Poll
Quiz Results
Share:
Take this Quiz Again
TGP Rating:
/20