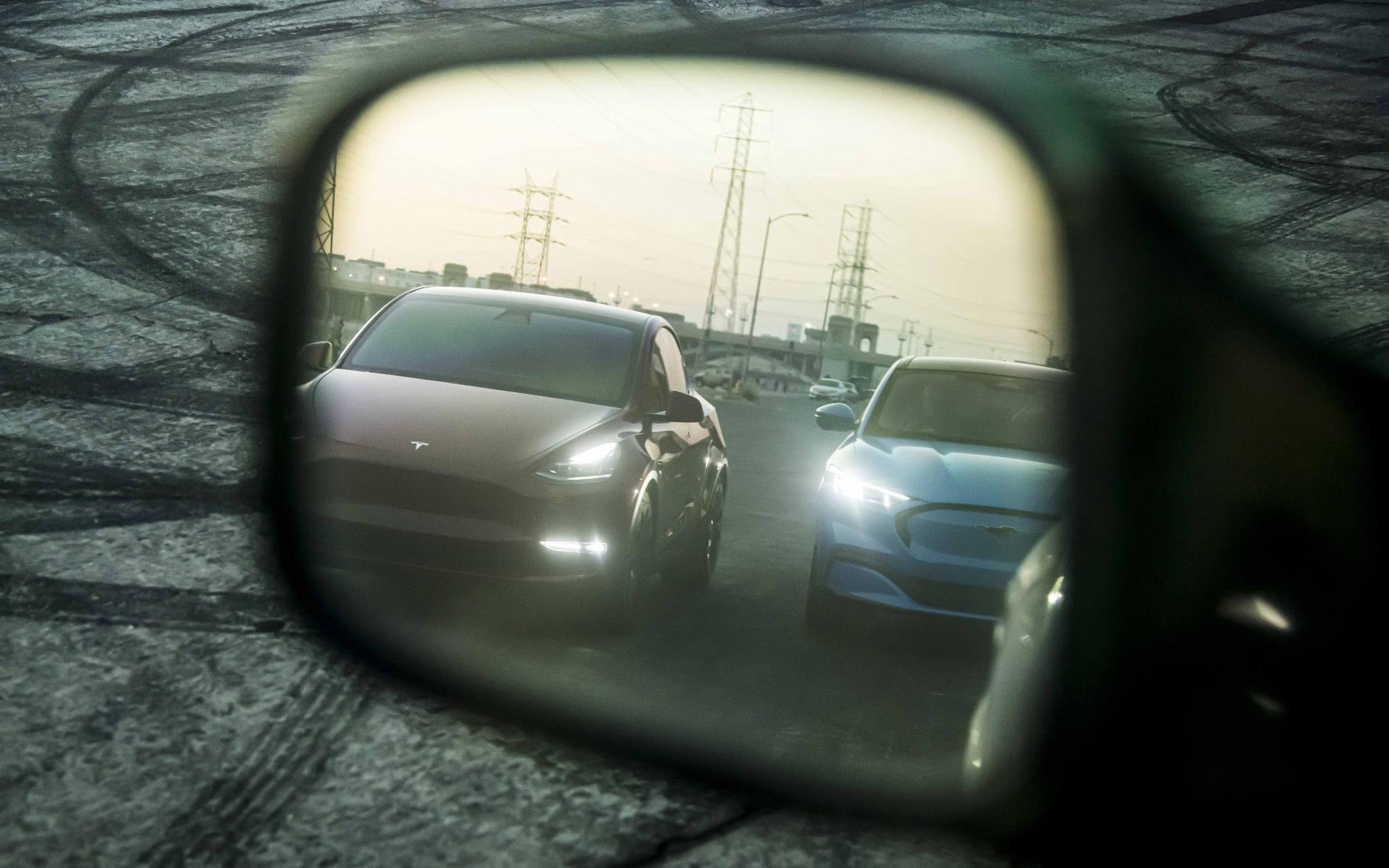 “Both are family SUVs—cool enough to be seen in, practical enough to cope”

As punch-ups go, this is right up there with David and Goliath—the irony being that Ford is the challenger and Tesla is the giant in this ring. Tesla’s value recently topped $600 billion—a staggering 16 times that of the Ford Motor Company.

It has achieved this by cracking the electric-car code—creating its own charging infrastructure rather than relying on existing networks. And, ironically, by flogging its zero-emission credits to the traditional car companies, helping them avoid regulatory emissions fines around the world.

Ford has big plans to electrify its entire range of cars and trucks, but it’s clearly got some catching up to do. Here’s the first step on the long and winding road. How the Mach-E fares here will give us a good idea how it should do in the months and years to come. 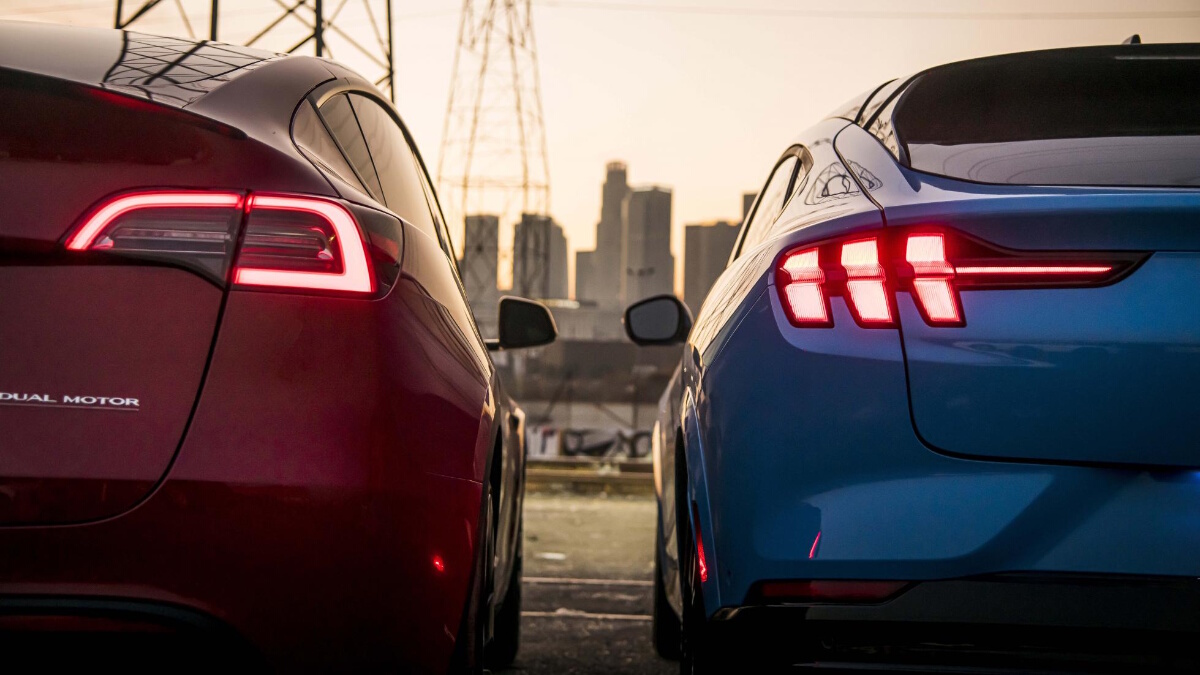 In the red corner, we have the Model Y, Tesla’s midsize SUV crossover in top-specification Performance trim, packing 450hp and weighing just over 2,000kg. It tips the financial scales at $61,000 (P2.97 million). In the blue corner stands the new Mustang Mach-E. This is a flagship First Edition fitted with the twin-motor 332hp drivetrain and weighs in at an identical $61,000.

Both are family SUVs—cool enough to be seen in, practical enough to cope. The Ford hits that mark reasonably predictably, nothing controversial, a hint of mean-streets-of-Mustang meets cutesy Disney. The Tesla is an MPV—remember them? It wouldn’t be cool if anyone else did it. Seconds out, it’s time for round one.

The first round of this 24-hour electric grudge match in Los Angeles, the world epicenter of electron-powered cars, starts with both contenders on an identical 93% charge. We do what we do with all new cars: head for the canyons and curves in the mountains above the city. I have a secret route honed over many years that, within fewer than 48km, can tell you pretty much everything you need to know about a car’s ride, handling, acceleration, and braking. It’s our own private Nordschleife or Isle of Man, and not far off as demanding.

We are expecting the Mach-E, despite its power deficit in this spec, to be the star performer here, given all its sports-car heritage and much-hyped handling. Plus, it’s got the benefit of being developed against the known Tesla package. I mean, that’s almost like putting weights in your boxing gloves.

But when we get to the top of the mountain, we agree that it’s the Tesla that is the more enjoyable, the more athletic of the two. It’s noticeably lighter on its wheels, feels much more incisive and quick-reacting turning into corners. Admittedly, there’s little steering feel, but overall, the lower center of gravity and the higher grip help boost confidence and allow you to use all of the Tesla’s considerable power. Power that Tesla claims can get it to 60mph (97kph) in 3.5sec—almost two whole seconds ahead of the Ford.

Somehow, it’s more rewarding and enjoyable to drive, not only than the Mach-E, but also compared with previous Model 3 sedans we have driven. We suspect that’s down to the Y’s 21-inch wheels and slightly lowered suspension—a setup that does make the ride a bit harsh. 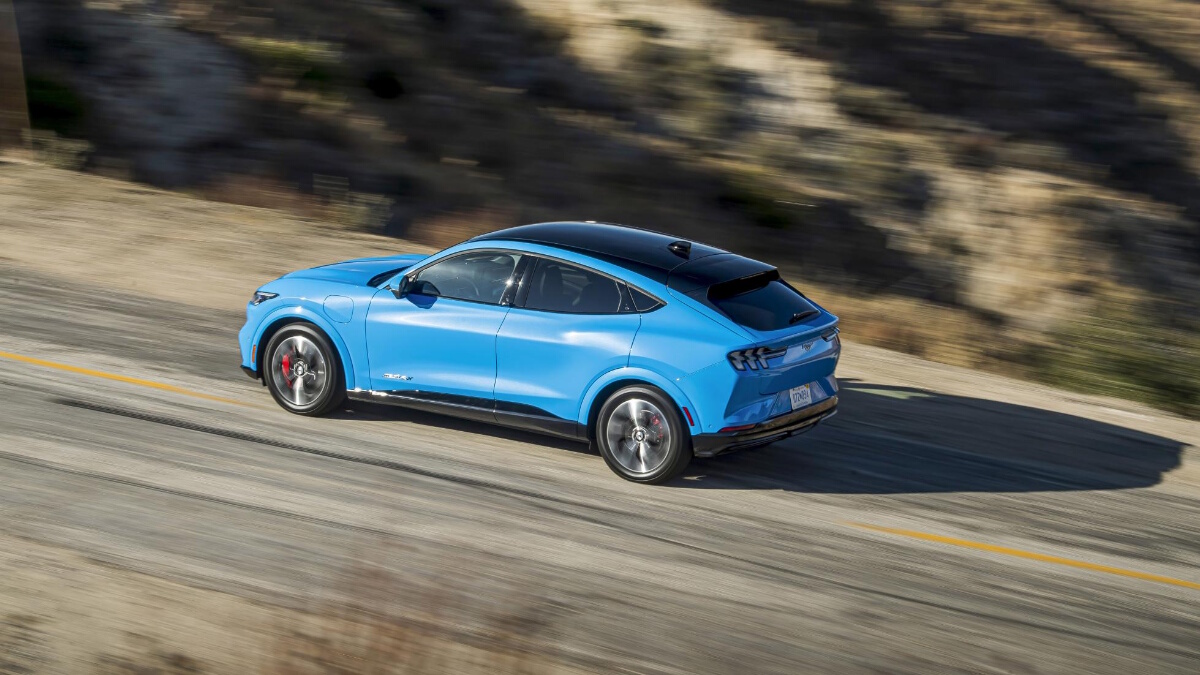 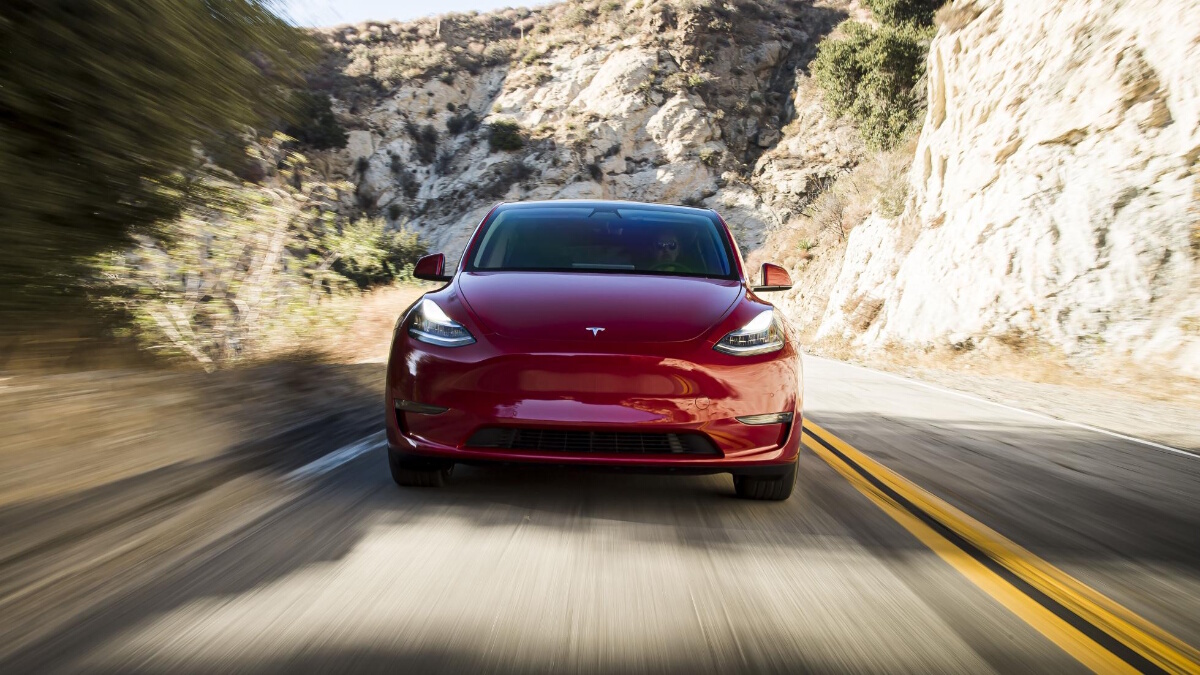 Depending on where you put your driving priorities, that might make the Ford a better bet. The Mach-E’s 19-inch wheels give a much smoother, plusher ride than the Tesla on all surfaces. Road noise is lower and the car is calmer. But the Mach-E is heavy in comparison, the steering weight—especially in Unbridled, the most open of the three performance modes—feels synthetic, and the car takes a moment longer to respond to input than the Y. It’s not a car that likes to be thrown around, or rewards you for doing so. It’s best kept within its modest grip boundaries: Manage the weight by turning in more gradually, and you can still rocket out the other side of a corner in a very satisfying way.

And it’s easily quick enough for an SUV. Despite the Ford being 200kg heavier, mash the throttle in any mode and its 565Nm of torque arrive instantly with a Blade Runner-esque soundtrack booming out of the speakers.

The Tesla has the more complete electric drivetrain—its transition from acceleration to regen braking is superb. You can make deceptively quick progress without once touching the stop pedal, just relaxing the throttle to get the car to turn in. It sounds alien, but all it takes is a couple of corners for it to be second nature—and fun.

Both cars enter the next round with about 65% of battery charge remaining, having regen’d several percent on the run back down the mountain. Try doing that in your regular pony car. That’s still plenty to do a day of city driving. So, no range panic yet.

This round is all about how each vehicle stacks up when it comes to moving people and their baggage. Since we have a photographer and his assistant with us, we have no shortage of awkward-sized cases, bags, and strange, unreasonable requests for pictures in hard to get to places.

Ford claims the Mach-E’s interior draws on mid-century modern design themes of clean lines and floating details, like the central control screen, to achieve a sense of openness and space. I wish they didn’t. I live in a ’50s MCM house, so it’s quite simple to compare and I’m not seeing it.

Don’t get me wrong—it’s a nice interior. The full-width textile-covered dashboard looks, feels, and indeed is, a B&O speaker, the pillar-box info screen is unobtrusive and crystal-clear, while the vast, portrait central screen is great to use and behold. Plus, the seats are instantly softer and more compliant than the Tesla’s, and the driving position can be tailored more easily thanks to a telescopic steering column. But it’s more conventional in here—Ford has left switchgear littered around, presumably unwilling to risk alienating current Ford owners. 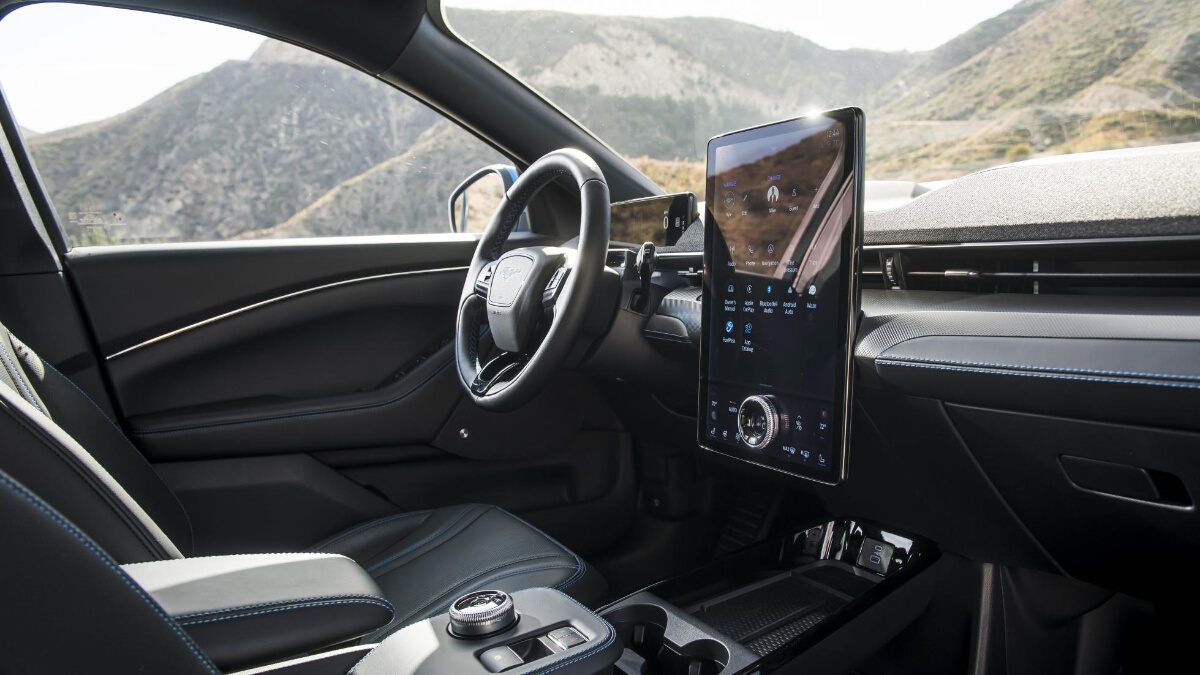 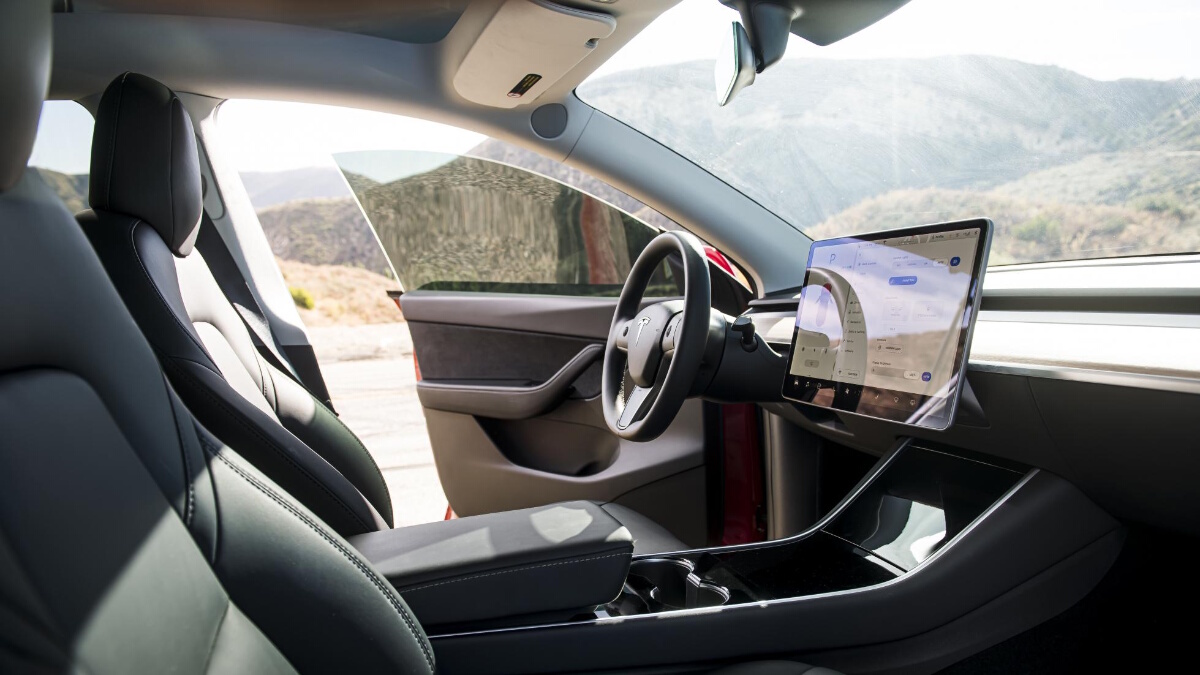 The Model Y, by comparison, is minimalist heaven. You have a wood-topped dash, a landscape screen, and no—zero—buttons other than the toggles on the steering wheel. That’s it. Spec it in white if you dare (though have a cleaner on speed dial) and it feels like you are in some kind of otherworldly spaceship.

A feeling that is only added to when you start to explore the technology on offer. The Mach-E has Ford’s excellent Co-Pilot 360 suite of anti-crash safety bells and whistles. But the Model Y’s Autopilot and other features are on an altogether different planet of sophistication. The car is near-sentient, monitoring traffic, pedestrians, and road furniture. It even reminds you when the traffic lights have turned green, in case you’re lost in thought. Rather than being annoying—you can turn off pretty much all the noises if you want—it simply feels more evolved and smarter than the Mach-E.

Both cars can shapeshift their interiors very quickly to adapt to differing loads of human and other baggage. They share low rear load decks, quick-folding split rear seats, and small but useful frunks. Rear passengers said they preferred the Model Y’s higher, more airy seating position compared with the Mach-E’s lower-slung, high-beltline seating, but there were no serious complaints.

After several hours of stop, go, and swerve through the now dimly lit downtown streets, we declared this round a draw. If you like your tech on the bleeding edge and your furniture minimal, the Y is the choice. But if you just want to drive an electric car that keeps you safe and doesn’t try and dazzle you, the Mach-E is on point. It’s less demanding, easier to interact with.

From inside to out, this penultimate session comes down to the physical kerb appeal of the two vehicles. This is not a round you score yourself—it’s all about what the general public and other road users think. And, on that basis, there might as well have been only one car in this test—the Mach-E.

Everyone we met—moving and static—was mesmerized by the Grabber Blue Ford while the red Tesla was all but invisible to them. Many didn’t even bother to check out the Y, just believing it was an X, or perhaps a 3—Tesla’s design hasn’t really evolved at all. But everyone wanted to know more about the Mach-E.

There’s been a lot of chat about use of the Mustang name being close to abuse of the hallowed brand. But we couldn’t find anyone—including serial owners of gasoline-powered Mustangs—who had anything but good things to say about it. Would they buy one? “Hell, yeah!” was the common response. So, mark that one down as a win for the Blue Oval—if you buy a car to get noticed. And to Tesla if you enjoy moving around anonymously.

With charge levels now down to 30%-ish, and both vehicles needing to be returned the next day with full batteries, this final round was all about charging. Tesla obviously lands the first uppercut by having a relatively mature, widespread Supercharger network. It’s impressive in Europe, but in California, it’s close to faultless.

So, we came up with a challenge. We asked each car for its suggested charging options and, surprisingly, they both came back with the same location—a shopping center less than 10km. Arriving at the mall, the difference could not have been more pronounced.

While the rather tatty regular chargers were just bolted into a couple of stalls on a low-level floor, their cables slung like knotted clotheslines over the boxes, the sleek, clean Tesla Superchargers occupied a full quarter of the top floor of the car park. When we plugged the Mach-E in, the charger informed us it would take 20 hours to fill. The Tesla? Just 45 minutes. This has nothing to do with the cars themselves, but highlights that the public charging network—both in Europe and the US—is five years behind Tesla’s. 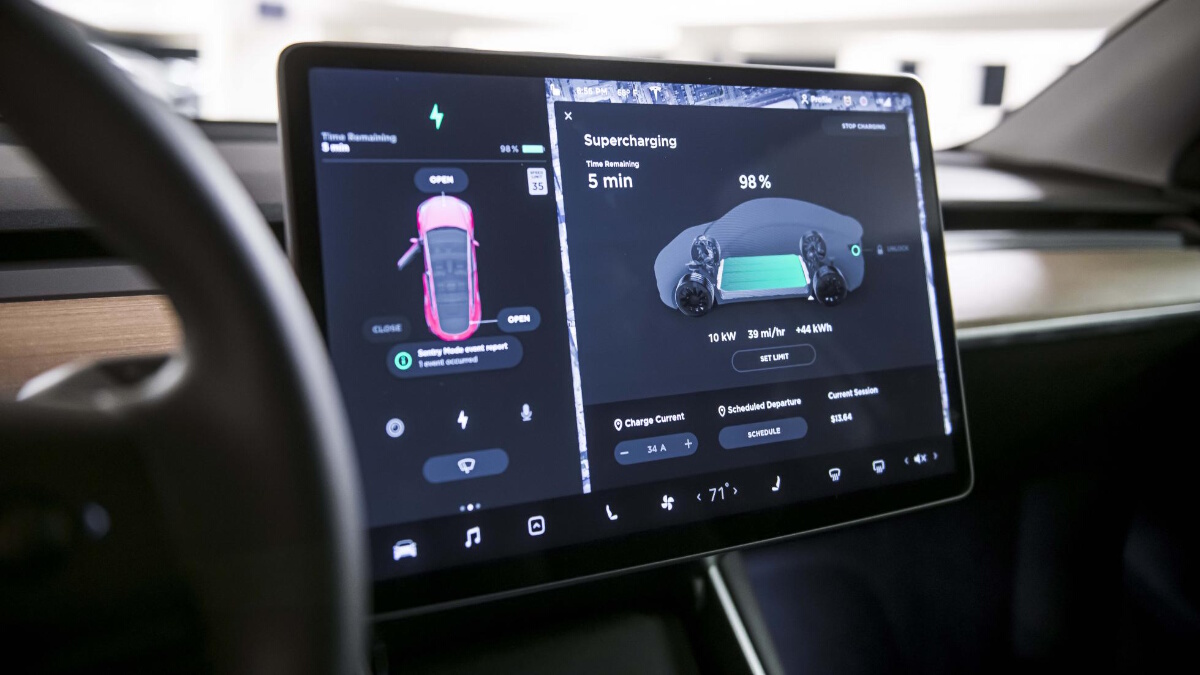 Superchargers, which are still faster than the fastest offered by Ford’s network, almost completely remove the whole range-anxiety thing. It’s just so easy to use Tesla’s network away from home. Plot a long journey and the Model Y will tell you where to stop, how long you’ll need to be there, and redirect you if that Supercharger is occupied before you get there. Ford’s on-board system isn’t too far behind, able to find fast chargers, plot routes, and so on, but it isn’t yet quite as cohesive.

What to make of the two cars overall? Well, both do the job of being a family SUV at least as well as anything with an internal combustion engine. No, the Mustang Mach-E is not a Mustang as we know and love it, but it’s a highly competent and moderately engaging first step on Ford’s path to electrification. But despite the clearly apparent investment Ford has put in, our winner is the Model Y. Not because of its speed and handling, but because it feels the fresher, more forward-looking product. It wins on points, but given this is Ford’s first attempt, it’s a very solid one indeed. Tesla worth 16 times Ford? It could soon be time to back the Blue Oval instead. 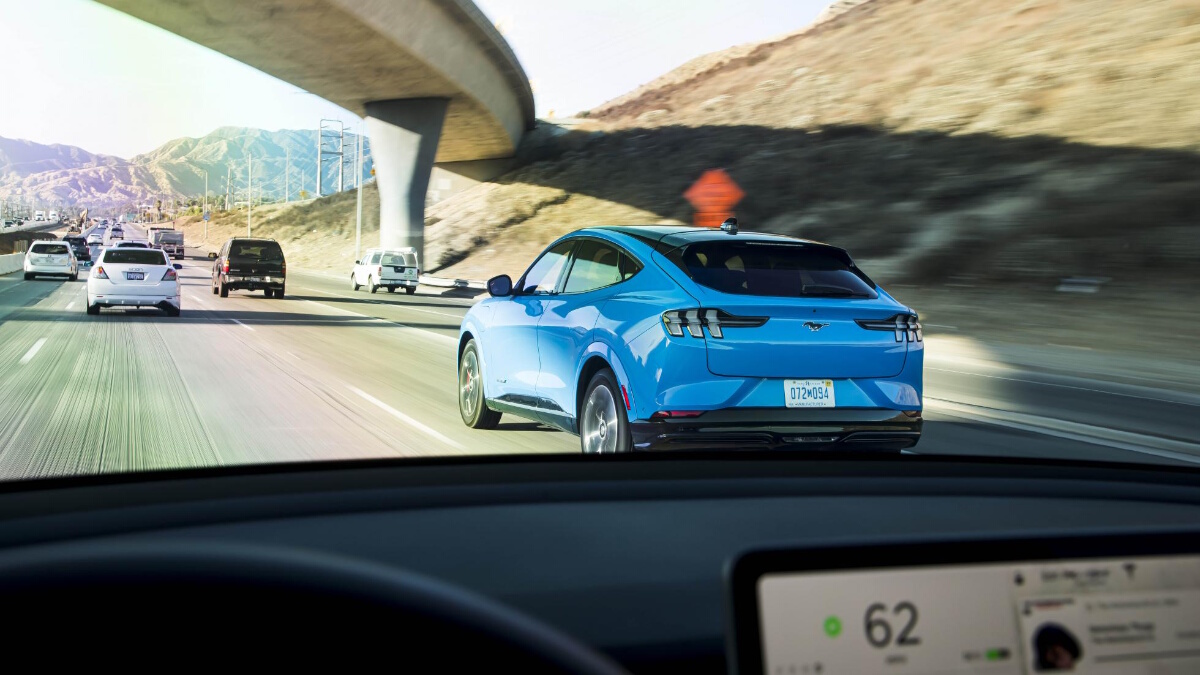 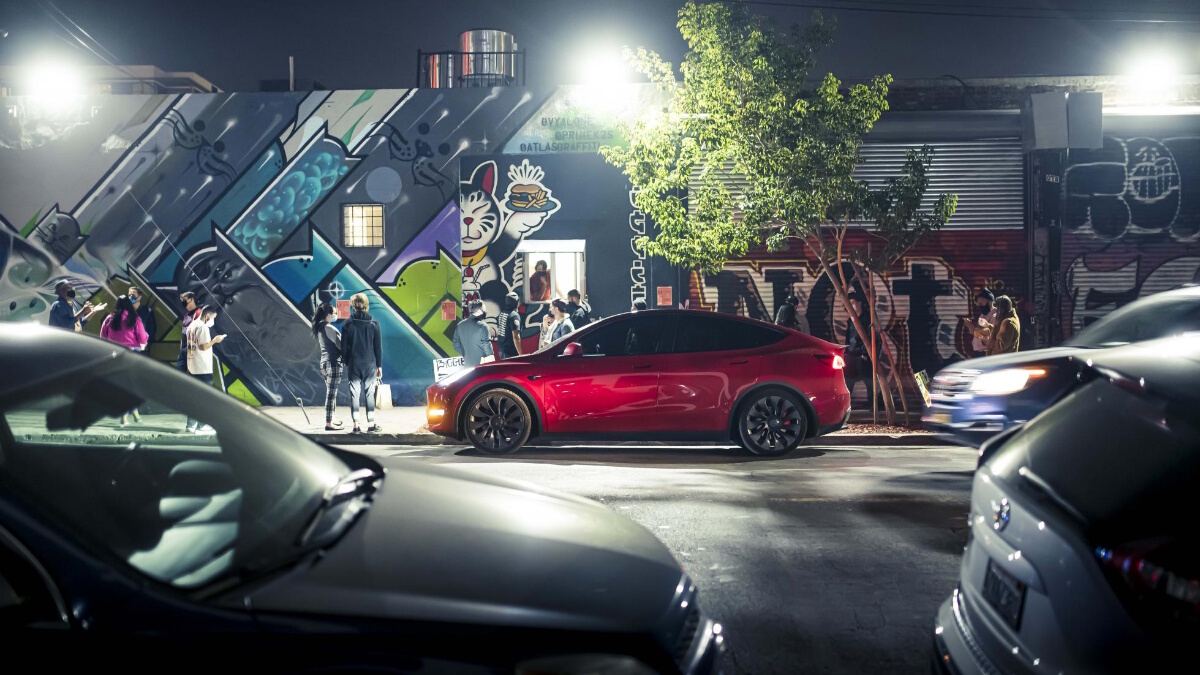 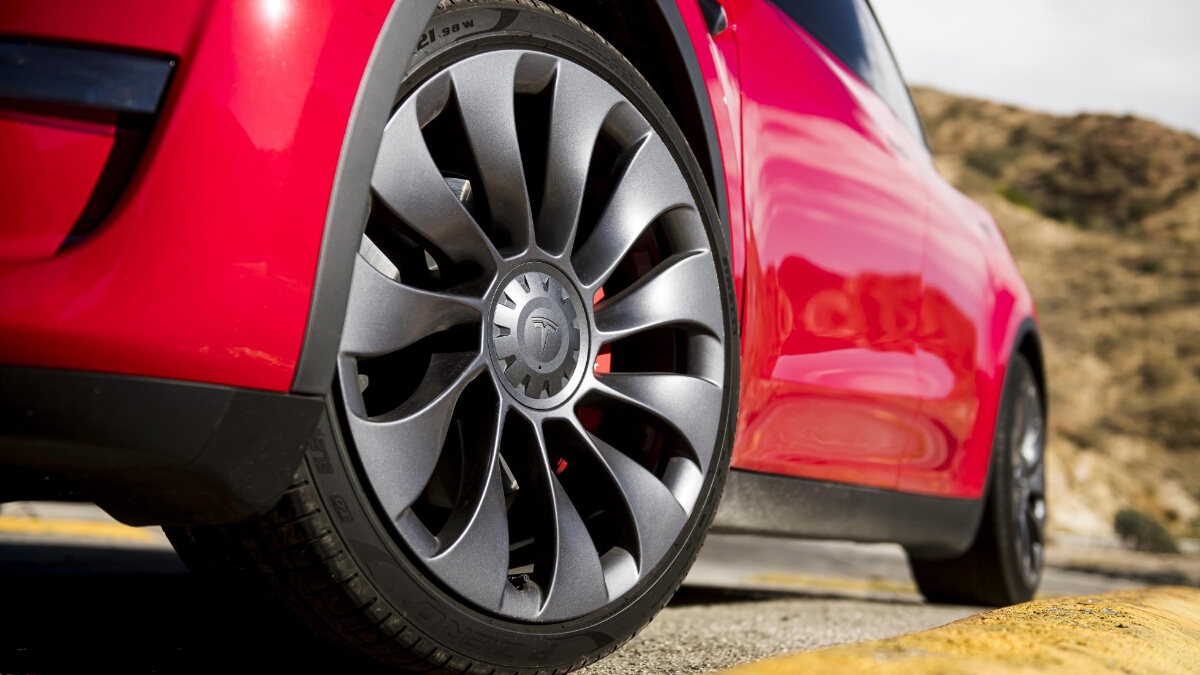 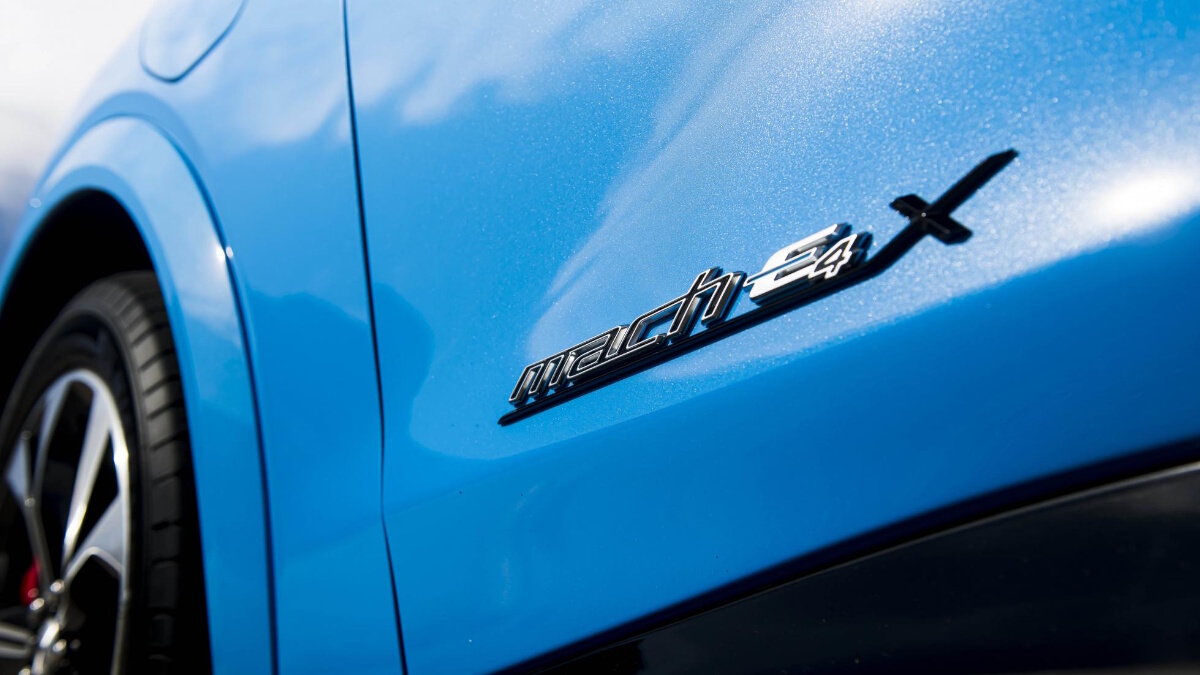 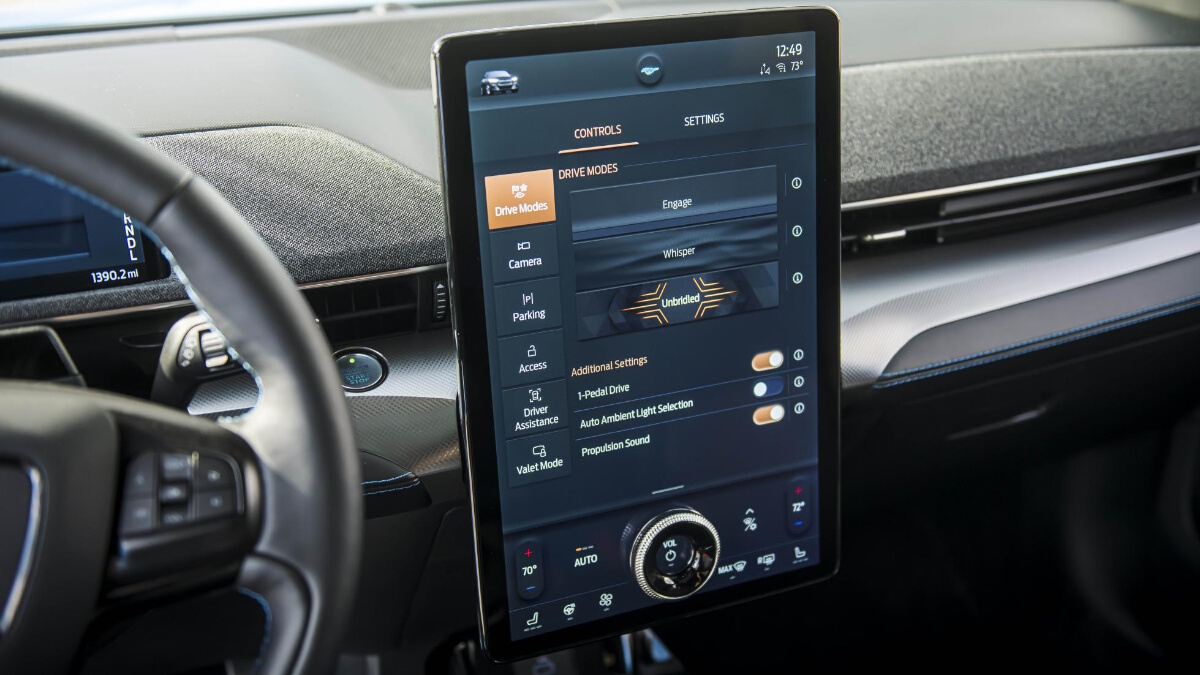 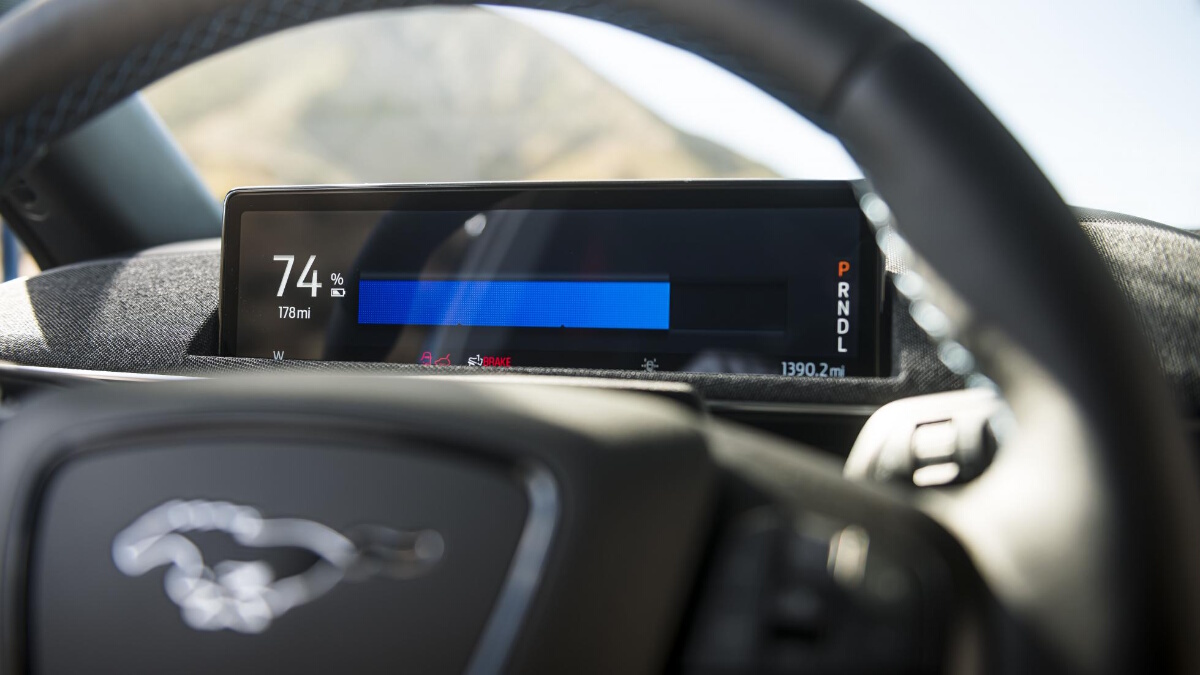 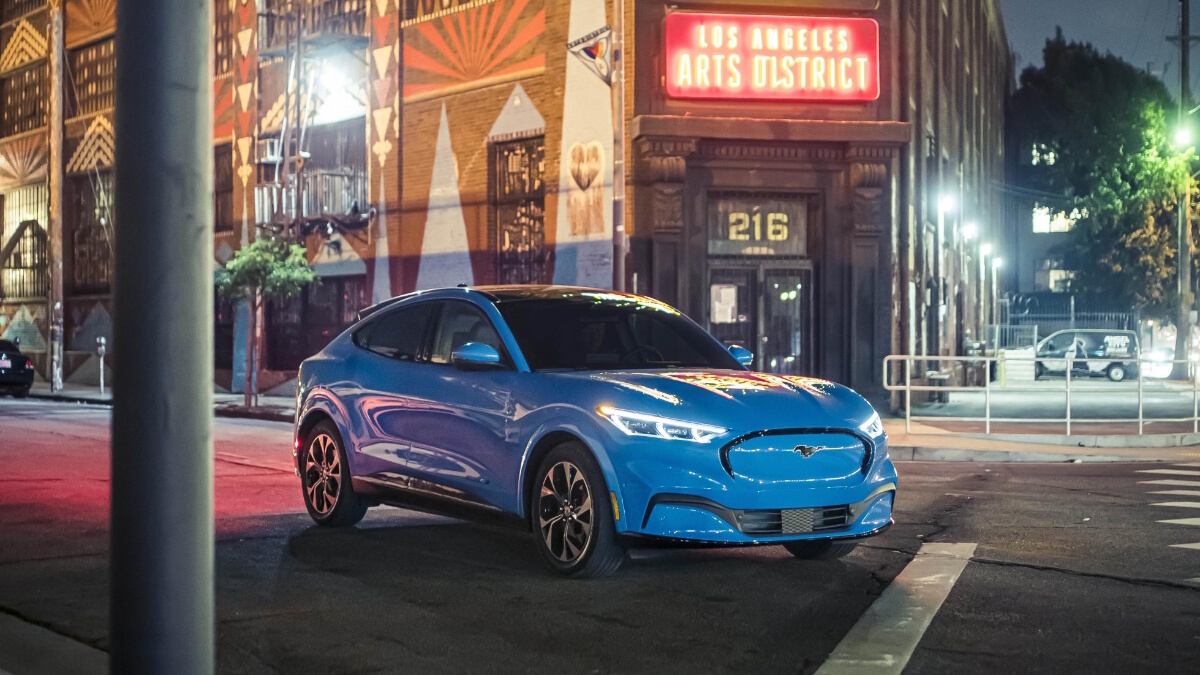 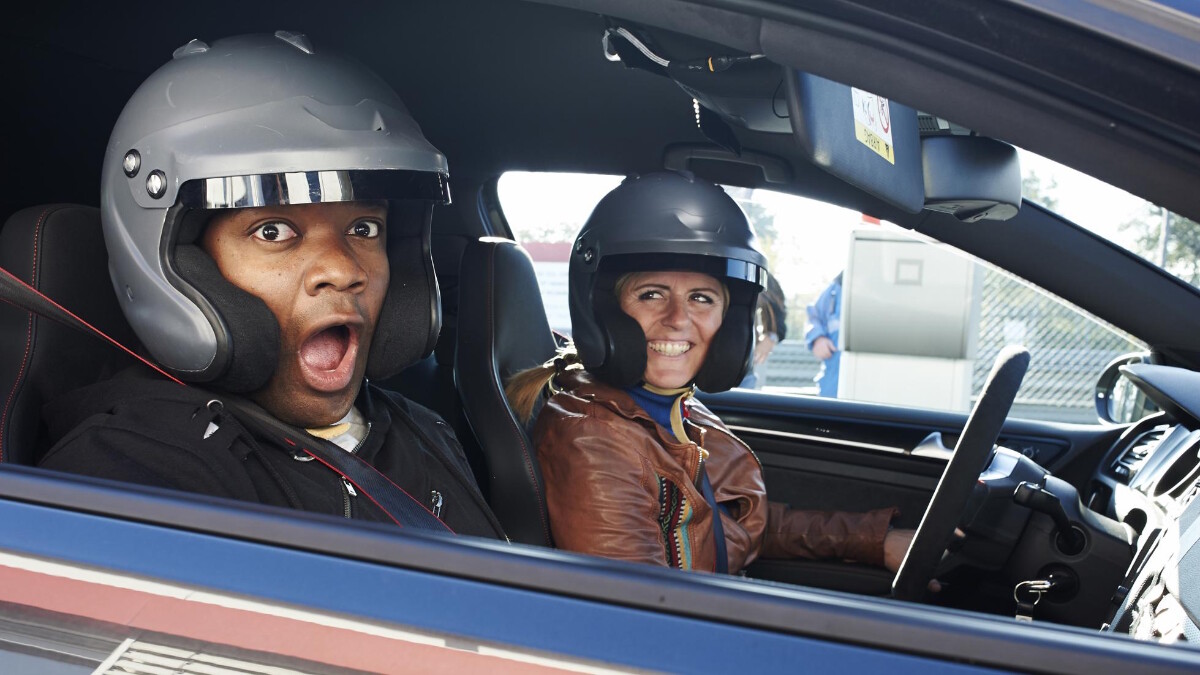 9 Times Sabine Schmitz proved she’s the Queen of the Nürburgring
View other articles about:
Recommended Videos
Read the Story →
This article originally appeared on Topgear.com. Minor edits have been made by the TopGear.com.ph editors.
Share:
Retake this Poll
Quiz Results
Share:
Take this Quiz Again
TGP Rating:
/20