On the 50th anniversary of the moon landing, we look back on the time we tested the moon buggy
by Dan Read | Jul 24, 2019 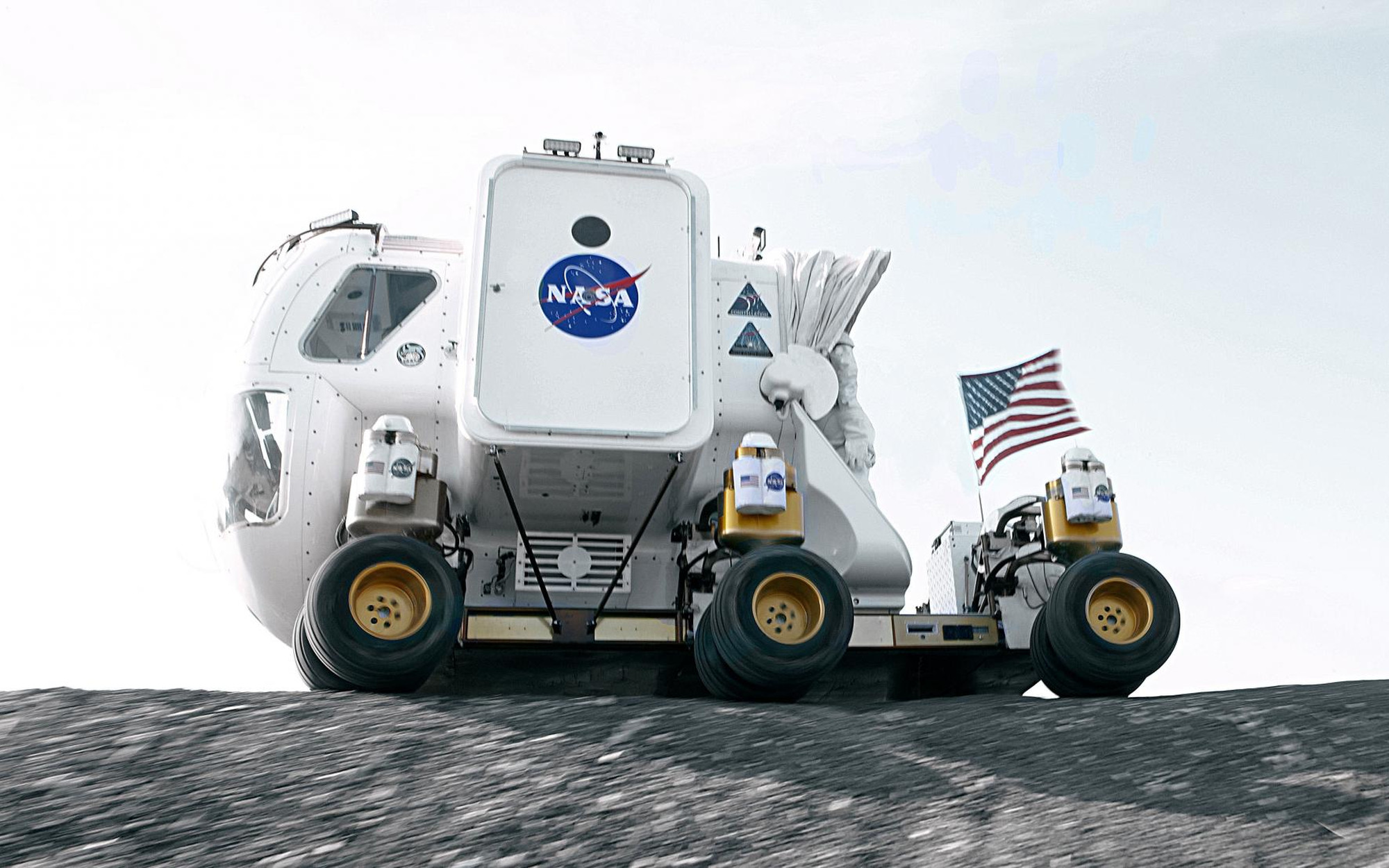 Fifty years ago, Neil Armstrong and Buzz Aldrin became the first humans to walk on the moon. Soon, more people will follow in their bootprints as we build a base for missions to Mars. But what will we drive up there? The answer is this: the Lunar Electric Rover, NASA’s all-new moon buggy. Here’s the time we drove it, back in 2010...

In 10 years from now, man will return to the Moon. Probes and satellites have already searched out landing sites. NASA is building the rockets to take us there, and a bunch of astronauts are ready to become the next moonwalkers. They’ve been measured up for spacesuits. They’re rehearsing their historic lines. Good. Great. But what are they going to drive when they get there?

The world got its first look at NASA’s new wheels, the 21st-century moon buggy, during Barack Obama’s inauguration parade. It scurried along behind some fat trumpeters, did a pirouette in front of the president, then sped off. After that, it was taken back to Houston and—before it gets packed into a rocket and fired into the sky—we asked if we could drive it. Foolishly, NASA said yes, so we jumped on a plane to the Johnson Space Center, home of mission control and the heart of America’s space program.

The new car—or the Lunar Electric Rover, to give it its proper name—is part of ‘Constellation,’ the missions that will once again put someone—man or woman—on the Moon. Like the later Apollo missions of the ’70s, Constellation is about hard science. After all, once you’ve beaten the Russians to the Moon and stuck your flag in the soil, you should probably do something useful up there. The last three Apollo flights all had cars so astronauts could collect rock samples from far-flung lunar landscapes, miles from where their spaceship had landed.

That taught us lots about the Moon and proved the value of cars in space. But, in the words of an Apollo 11 engineer, the early moon buggies were “nothing more than fold-up golf karts.” That may be a little unfair on the old machines, although it’s true they did look a bit like something MacGyver might rustle up with some chewing-gum wrappers and paper clips. The new Rover is much more advanced.

This time around, it won’t just be a taxi. It will be a JCB. And a home. Constellation’s goal is to establish moon bases for onward missions to Mars, and for that, we need to build stations and launchpads. The new car has a pressurized pod where astronauts can live for up to two weeks as they search for locations, with beds and a toilet and a shower—like some sort of cosmic Winnebago. And it can be fitted with plows and blades that transform it into a bulldozer for clearing rocks to make way for lunar construction.

Imagine a sci-fi Moon Town rising from the lunar surface, with silvery buildings and astronauts bouncing down to the office. A place where we’d all suck space food through straws and keep pet Clangers. And if Richard Branson has his way, you could even be flying there on Virgin.

Underneath the Winnebago, the Rover has a fabulously capable chassis, nicknamed the ‘golden chariot’ by the people at NASA. It has 12 wheels arranged in six pairs, all of which steer and have their own motor. So it’s a 12-wheel-drive, all-wheel-steer machine. Each pair of wheels has its own suspension unit that allows them to climb over rocks while those on the other side drop into hollows. Like a spider picking its way over stones, with some legs perched high and others stretched low while its body stays level, it’s perfect for the boulder-strewn lunar surface.

And, of course, it’s electric, as internal combustion is impossible in the vacuum of outer space. Eight battery packs are sandwiched in the chassis floor, and together they produce over 1,625Nm of torque. That’s way more than a Bugatti Veyron, and essential for that bulldozing power. Flat out, it does 21kph, but it’s geared for torque rather than for speed. Even when worked hard, it can go 97km on a single charge, which is further than the distance covered by all the Apollo Rovers put together. Solar-powered stations will be placed around the Moon, which pre-charge a new set of battery packs so that the Rover can simply pull up and exchange old for new.

The Rover, and the equipment to build those charging stations, will be sent into space on its own rocket. The old Apollo buggies rode piggyback on lunar modules, as there wasn’t enough money to send the car and the crew separately. Constellation will use two brand-new Ares rockets—one for the astronauts, and one to carry their kit. The two crafts will rendezvous in outer space before dropping onto the Moon together. It’s all very possible, but also very expensive. So it’s no wonder the price of the new Rover is uttered quietly. It costs roughly $6 million (more than P307 million using 2019 conversion rates). And that doesn’t include development money.

With this in mind, we climb up through the side hatch and enter the Rover. We’ll be driving it over the lunar rockyard in Houston—a surreal and spectacular replica of the Moon’s surface, complete with steep craters and about 80% more gravity. It’s also where the Apollo astronauts trained to drive their car.

Inside, the Rover is split in two. There’s a living area, which feels bare and clinical like the back of an ambulance, minus the pensioner with the broken hip. The fold-down beds are hard and plastic, and you can just about stand without stooping. Then there’s the driving area, which feels open and light, thanks to the big windows that look like the nose of a Lancaster Bomber. A bank of screens forms the dashboard, and there’s a joystick by each seat, so it can be driven from either side by left- or right-handed astronauts.

You sit right up front, forward of the front axle, with most of the machine stretched out behind you. You press a button under the screen to engage drive, then push the joystick forward to move off. There’s a judder as the transmission hooks up, before the Rover eases off with a whirr. Moving forward or in reverse is as easy as pushing or pulling the joystick. To turn, you twist it like a pepper mill. If you want to move 90 degrees sideways, simply cock the joystick left or right, and the whole machine crab-steers to one side—perfect for docking with that charge station.

The grip is phenomenal. With all that torque and traction, it never slips once. Unlike a regular car, it’s hard to feel what’s going on beneath you, as the wheels are so far back and the suspension keeps the pod so level. As you descend into a crater and lean into your seatbelt, you’d swear you’re about to nose straight into the ground. But the short overhangs and the high ground clearance stop you from scuffing the rocks, and the all-wheel-drive system hauls you up the other side with little effort. What they’ve built here is the world’s ultimate off-roader. Perhaps the best in the universe. Well, until ET makes contact and shows us his.

In tests in the New Mexico desert, NASA ran the Rover against a couple of military-grade Humvees. The engineers tell us that after a few days, the army machines were ‘all torn up,’ while the Rover carried on oblivious. Former Apollo astronaut and original Moon driver Harrison Schmitt tried the Rover and was blown away by its ability, shortly before an engineer took the controls and nearly ran him down with a sneaky crab-steer maneuver. On the same test, two astronauts spent a fortnight in the Rover and kept themselves amused with DVDs and a stereo, just like they’ll do on the Moon. It even has cruise control.

So there you are, cruising the Moon inside your rig wearing a T-shirt and shorts, with some Ziggy Stardust blasting from the speakers. Or Brian Eno’s Apollo soundtrack spilling into the cabin as you gaze out on a beautiful Earth-rise.

As we scoot around the gray rockyard among the volcanic rocks, it’s hard to imagine what it really feels like to drive on the Moon. Only six men have ever tried. Apollo 16 astronauts Charlie Duke and John Young were the coolest of the lot, and they reported that in one-sixth gravity, the 1972 buggy felt nimble and floaty. “Man, this is a fun ride!” Duke said, before handing over to Young for the Lunar Grand Prix, the part of the mission where they tested the buggy’s handling. Young accelerated hard, and the Rover bounced out of craters. “He’s got about two wheels on the ground!” Duke yelled to Houston, “There’s a big rooster tail coming up off all four wheels, and as he turns, he skids. Man, I’ll tell you, Indy’s never seen a driver like this!”

When the first buggy was unloaded from Apollo 15’s Falcon module, things didn’t go so smoothly. The front steering system locked, so the astronauts were left with a twitchy, rear-steer machine that had them powersliding. Those Rovers used wire-mesh wheels because air-filled rubber tyres were far too heavy. Despite the drifting, they were grippy and robust and impossible to puncture. For the new Rover, NASA is considering Michelin’s ‘tweel’—a combination of a wheel and tire that uses flexible spokes to act like a squidgy sidewall and support an outer rim. Like the wire mesh, it’s impossible to puncture, so the astronauts won’t have to stop to change wheels.

When they do need to get out—to collect samples and press bootprints in the lunar soil for the first time this century—they’ll exit through a port at the rear of the pod. They open a door and step right into their spacesuits, which hang off the back of the Rover like limp mannequins. Once comfortable, the door shuts and forms an airlock before the suit is released, allowing the astronaut to start his moonwalk and begin building those moonbases in exactly the right place. Without the Rover, he’d just be kicking around in the dust near the landing module.

So as politicians, eco-warriors, and prophets of doom proclaim the downfall of the car on Earth, it’s a different story in outer space. The Lunar Rover is being hailed as the tool that will allow astronauts to travel farther and do more, taking us one step closer to Mars and shaping the course of history on a truly galactic scale. 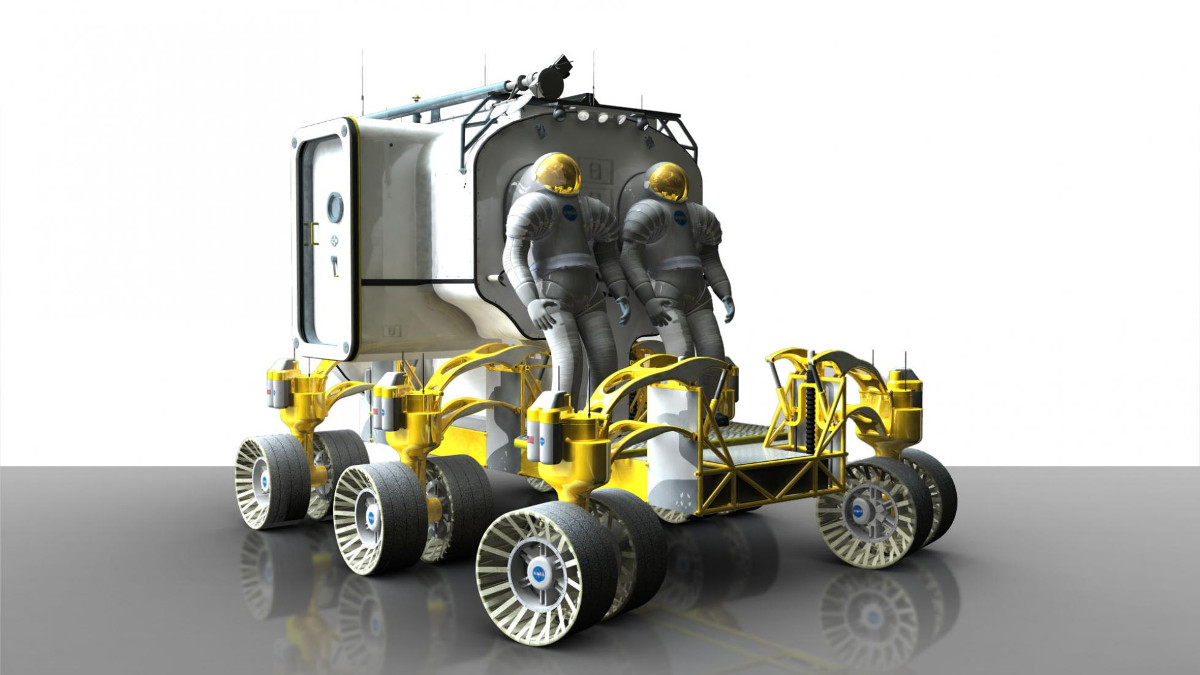 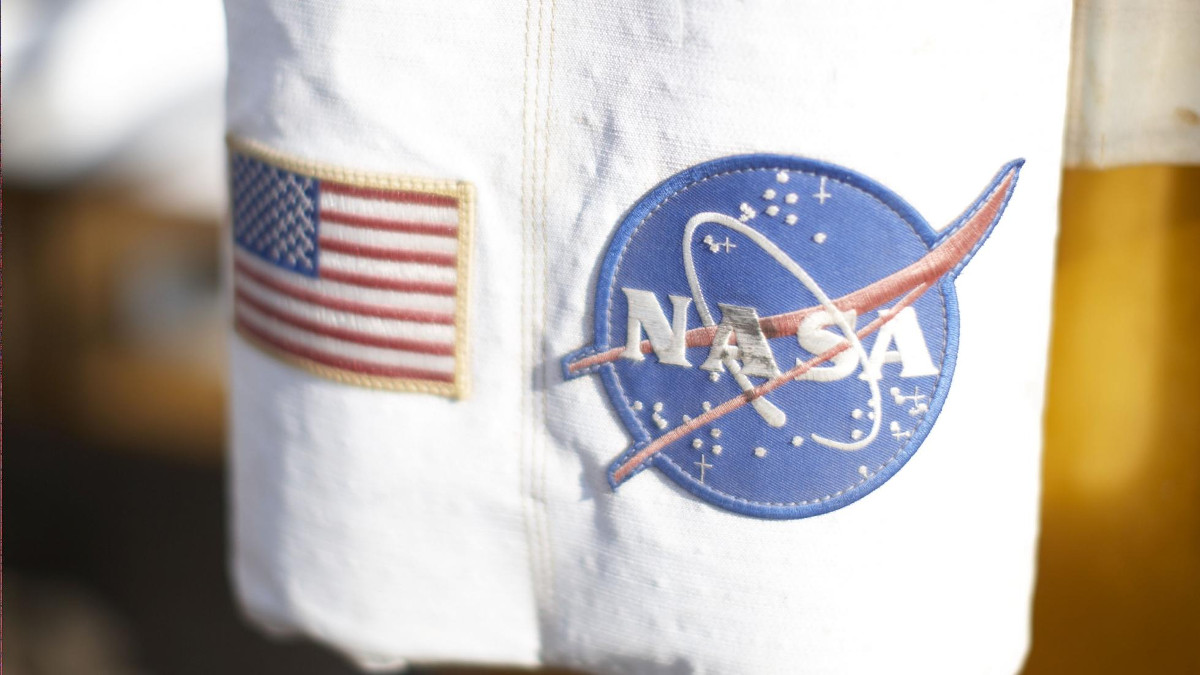 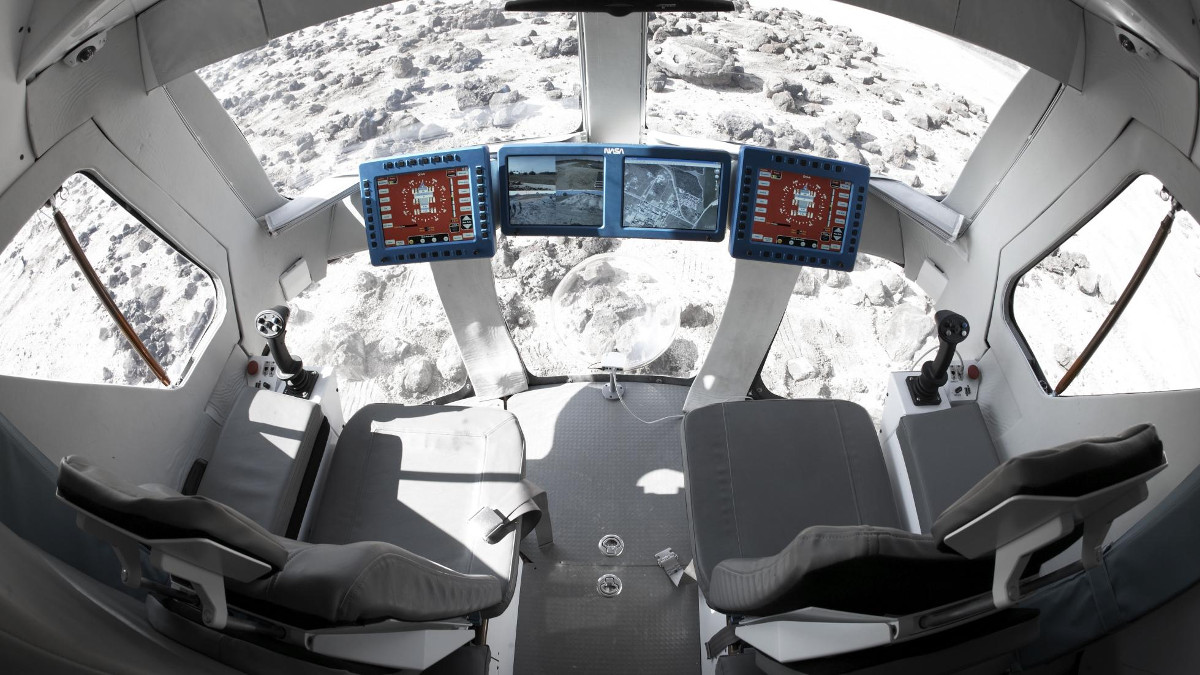 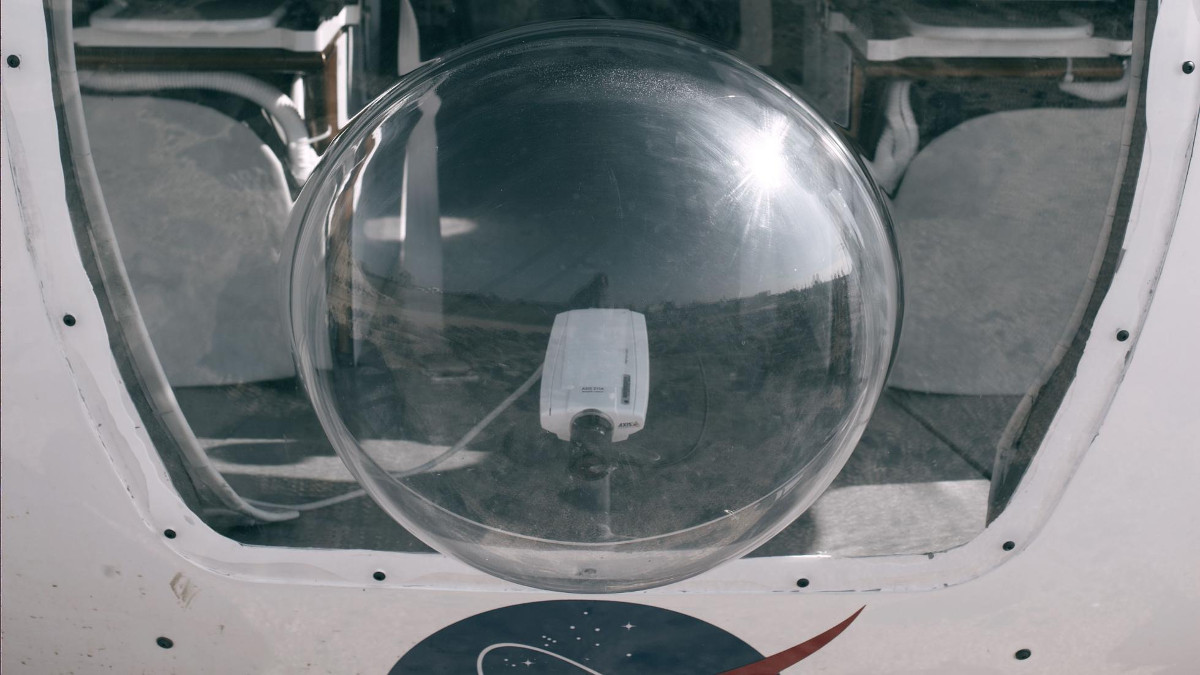 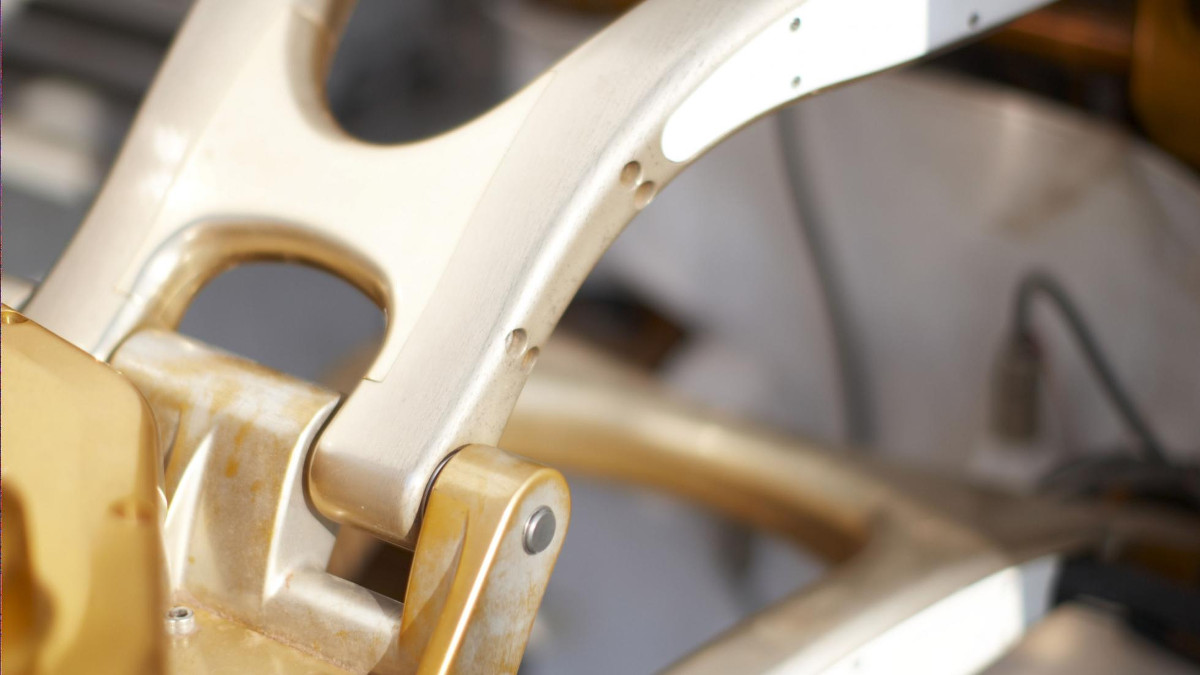 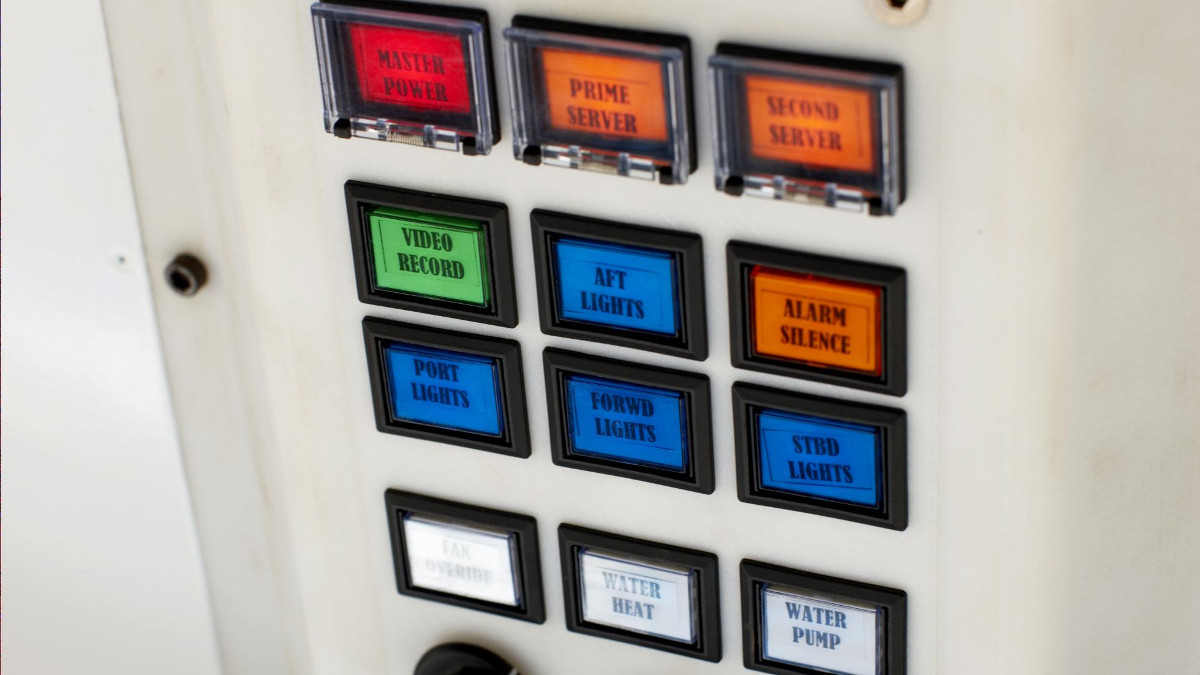 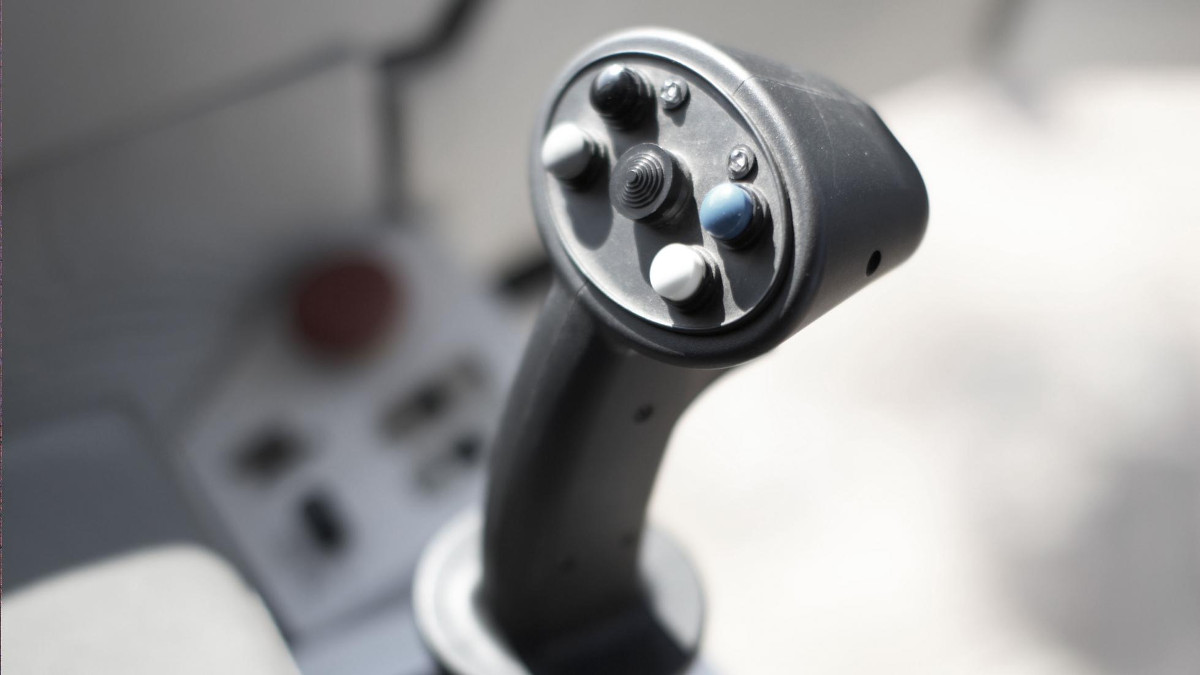 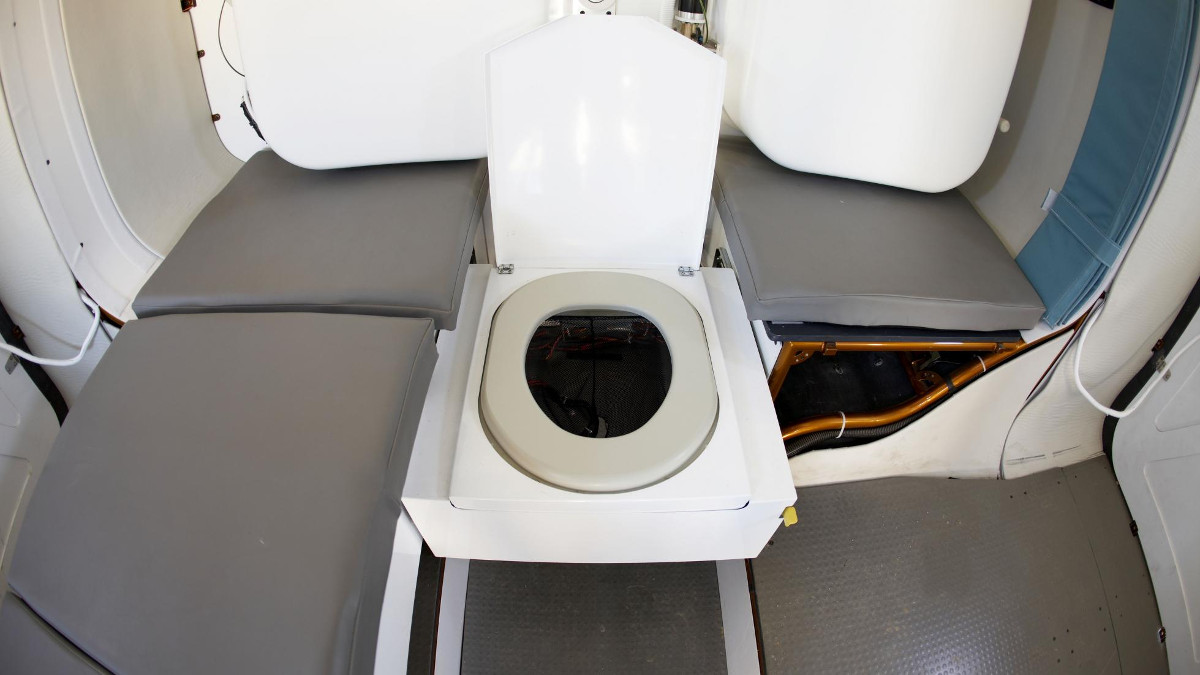 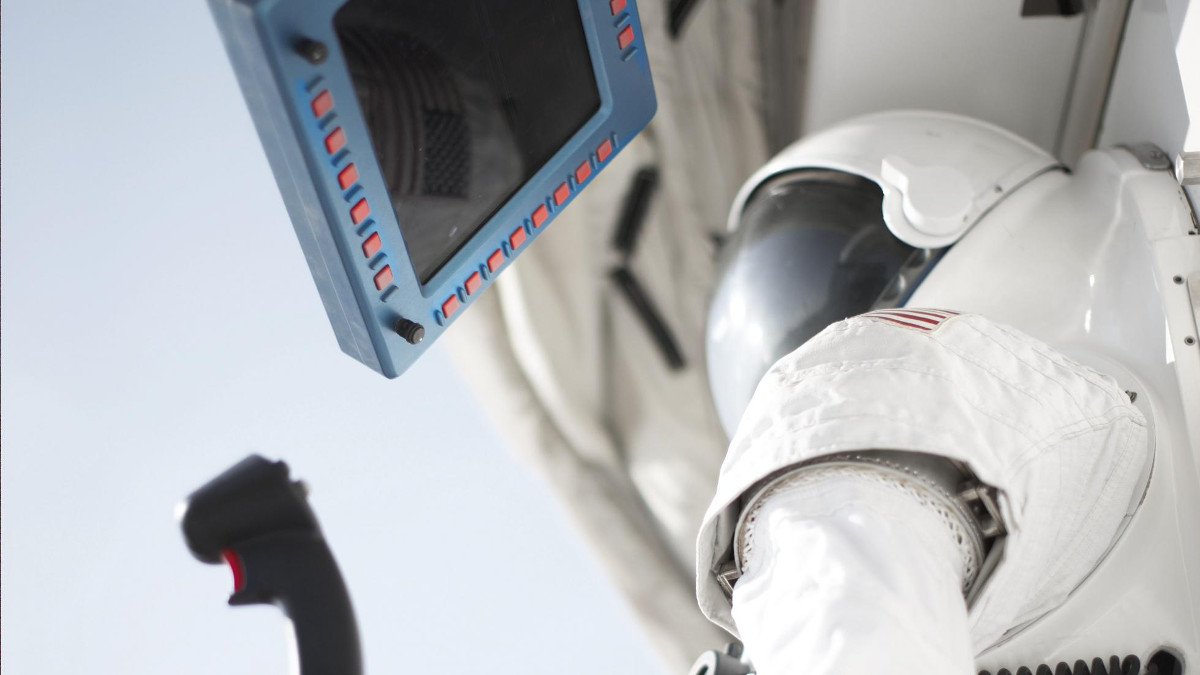 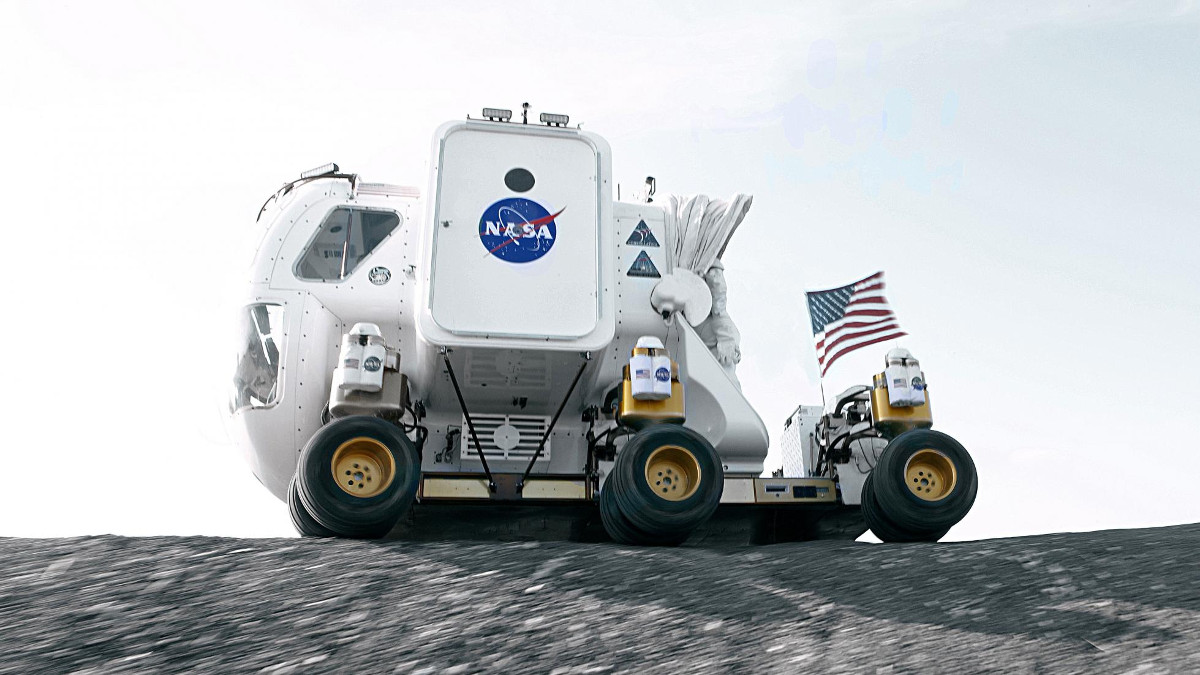 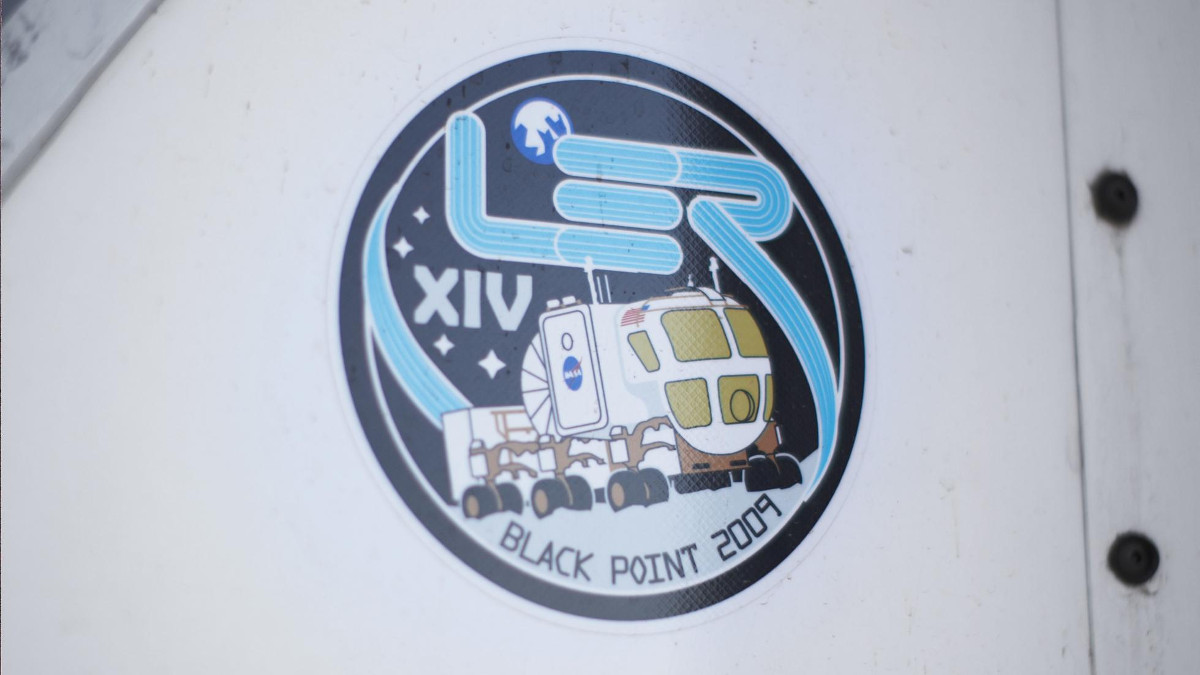 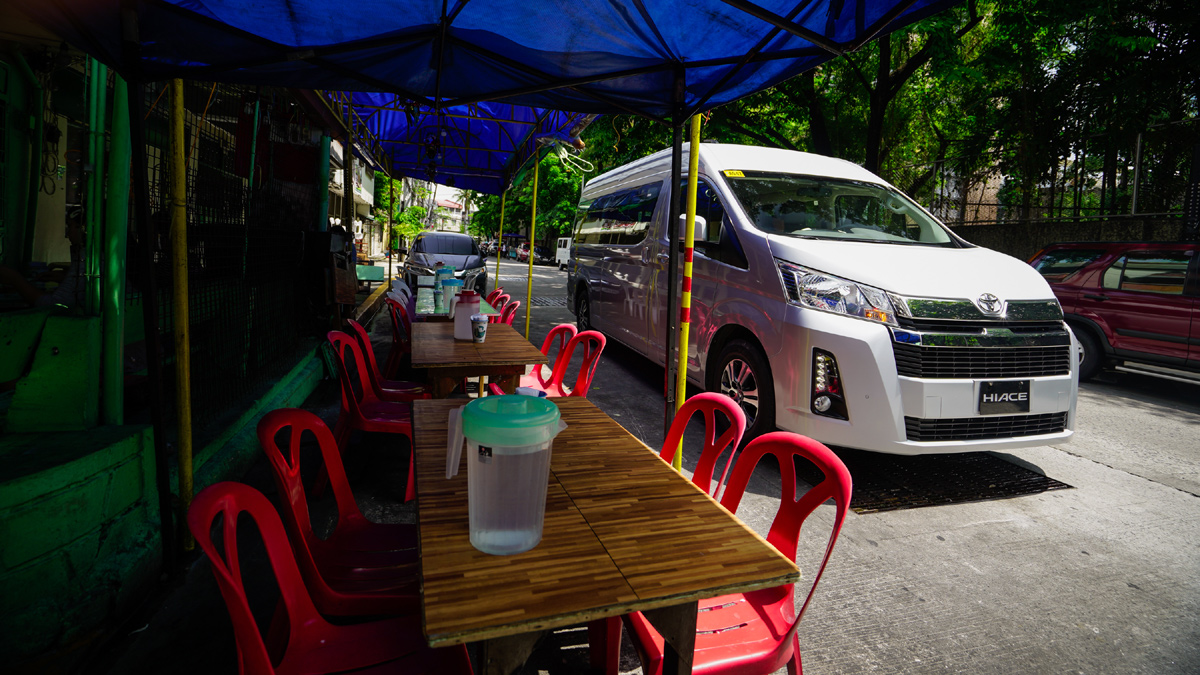 Everything you need to know about the 2019 Toyota Hiace
View other articles about:
Read the Story →
This article originally appeared on Topgear.com. Minor edits have been made by the TopGear.com.ph editors.
Share:
Retake this Poll
Quiz Results
Share:
Take this Quiz Again
TGP Rating:
/20