Scene Zone: A car was the centerpiece in one of the greatest music videos ever

Do you still remember OK Go’s ‘Needing/Getting’ starring the Chevrolet Sonic?
by Leandre Grecia | Aug 12, 2020
CAR BRANDS IN THIS ARTICLE

In the not-so-deep depths of YouTube lies arguably one of the greatest videos to ever feature a car: the official music video of ‘Needing/Getting’ by American rock band OK Go.

Starring in the video were the four band members—Damian Kulash, Tim Nordwind, Dan Konopka, and Andy Ross—and a heavily modded Chevrolet Sonic. It begins with the four guys inside the hatch tapping on the ceiling and banging on the doors to make a beat. Then, after a few seconds, that’s where the magic starts.

The Sonic is then driven forward and used as the ‘thing’ (we don’t know what to call it, actually) to play the instruments scattered across more than three kilometers of desert road. The actual vehicle used here was fitted with retractable ‘arms’ that were movable from within the vehicle, and these arms were used to strike the instruments strategically placed along the track.

Here’s where we pause, though. If you haven’t watched the video yet, we’ll tell you now that we won’t be able to do it justice by simply describing it further in writing. So, we’ll just leave it to you to watch the full clip below:

Pretty cool, isn’t it? This project was done in collaboration with Chevrolet, and it supposedly took four months to orchestrate the entire thing. This meticulous preparation included everything from locating which instruments (or random stuff) to use up to building the track itself.

In total, there were over 1,000 musical instruments—both traditional and makeshift ones—used for the entire video. Each instrument was then tuned accordingly to play one specific note when struck. The band said that the shooting and recording itself took four days to complete and that no ringers or stand-ins were used throughout the production.

Now, what makes the video even more impressive is the driving itself. The precision and skill needed to execute the whole thing to perfection are topnotch, especially considering how the track wasn’t merely a smooth stretch of asphalt. That was why Kulash, the vocalist and the guy behind the wheel, had to take professional stunt driving lessons prior to the shoot.

Rightfully so, as the Sonic had to be driven accurately throughout the whole track in order for the car to hit the instruments flawlessly and produce the correct melody and rhythm. This meant that the car had to move at calculated speeds and be positioned properly at each second to perform the song in just one continuous shot. And to make the task even more difficult, Kulash was also singing all throughout the drive. Bonkers.

Plus, here’s a not-so-fun fact: The guitar-filled part of the track was actually situated right beside the edge of the cliff. It would’ve been disastrous had the driver made even just the slightest mistake. Thankfully, he didn’t.

But the driver wasn’t the only one at work here, because the three passengers had to be spot-on in moving the car’s arms throughout the track as well. Needless to say, everyone eventually did their jobs right and they came up with a music video that’s nothing short of a masterpiece.

Since then, OK Go has come up with many other jaw-dropping one-shot music videos, but ‘Needing/Getting’ is still easily our favorite one yet. What say you, readers? If you want to see some more, you can check out other behind-the-scenes footage below. We also took the liberty of adding in another of the band’s music videos, this one shot in zero gravity inside an actual plane, mid-flight. Enjoy. 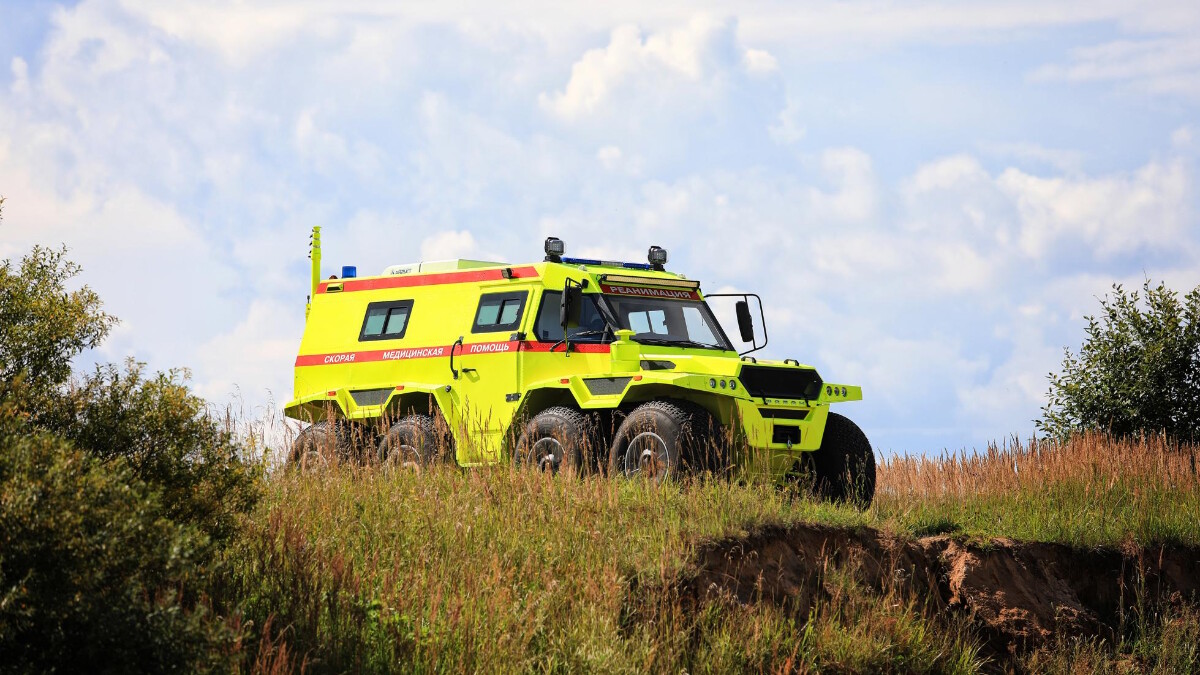 The 8x8 Avtoros Shaman ambulance can save you from anything, anywhere
View other articles about:
Read the Story →
This article originally appeared on Topgear.com. Minor edits have been made by the TopGear.com.ph editors.
Share:
Retake this Poll
Quiz Results
Share:
Take this Quiz Again
TGP Rating:
/20