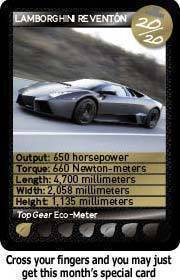 Wow. Thank you for the overwhelmingly positive response you gave the first batch of Trump Cars that we bundled with the June issue (featuring Nissan's X-Trail and Sentra on the cover). The cards were so well-received that we actually got reports from readers who had bought copies of the magazine without the free Trump Cars. In other words, some "enterprising" souls have been illegally nicking the cards. Frankly, we don't know whether this is good or bad.

In fact, as we write this, we just came from a convenience store where we personally saw two out of the four remaining copies of our July issue (with the Hyundai Sonata on the cover) missing the new batch of Trump Cars. Because of this, we're now seriously considering entrusting the cards with the cashier, from whom the cards may be claimed after one purchases the magazine. Sounds like a plan, doesn't it?

Anyway, while we deliberate on our antitheft strategy, here's a preview of all the cards included in the second series of Trump Cars. As with the first batch, 500 pieces of a special card were randomly inserted in the packs. So be sure to get a copy of Top Gear's July issue, which, by the way, is all about sexy.

For instructions on how to play the game, allow us to repost the rules:

We recommend five players since the complete deck includes 50 cards. Deal the cards face down to all players. Every player can only look at the top card. The dealer starts by choosing one statistic from his top card (e.g. 'horsepower' or 'TG rating') and declaring it. The others do the same, citing the same statistic. The player with the best such statistic wins the cards and chooses the next statistic.

The player who ends up with all the cards wins the game.
Continue reading below ↓
Recommended Videos
Read Next

Sure-fire ways service centers get pogi points
View other articles about:
Read the Story →
This article originally appeared on Topgear.com. Minor edits have been made by the TopGear.com.ph editors.
Share:
Retake this Poll
Quiz Results
Share:
Take this Quiz Again
TGP Rating:
/20