“We should maintain the combustion engine as long as possible”
by Charlie Turner | Dec 13, 2020
CAR BRANDS IN THIS ARTICLE

Top Gear spoke with Stephan Winkelmann back in 2016 on the last day of his 11-year tenure as president and CEO of Lamborghini. Now, following Stefano Domenicali’s departure to lead Formula 1, Winkelmann has returned to Sant’Agata, juggling his time between Lamborghini and Bugatti as chairman and CEO of both brands. Which seems like a pretty good gig if you’re into fast cars.

But no matter how sharp his suit is, is this too big a job for one man? Speculation surrounding the sale of Bugatti to Rimac (with the help of Porsche) is rife, and following a period of unprecedented change in the scale of Lamborghini’s operation (thanks to the introduction of the Urus, which has more than doubled the factory’s output), the challenges of running one of the Volkswagen Group’s premium brands would seem titanic. But two?

We caught up with Winkelmann after his first three days back at Lambo to see how he manages his time, what an electric future holds, and how he plans on delivering dreams...

Top Gear: What’s it like being back at Lamborghini?

Winkelmann: It’s good to be back. It’s emotional for me returning, and I feel honored. I was very touched by the incredible welcome they gave me. For me, Lamborghini is like a second home.

It’s a second home that has changed dramatically since your departure—production has more than doubled. So, you could say your second home now has a conservatory. But what feels different?

Well, we now have three products and have extended the plant by an incredible amount. But what really is the same is the attitude of the people—this is what I needed and what I liked. They have their expectation, I have mine. But they seem to be pretty much in line and that was a very positive surprise, that the attitude and drive is the same as when I left in early 2016. I am grateful because the second time is always different.

But what do you want to achieve in your second stint as the boss?

The key priority is to deliver the new Aventador, then the new Huracan, and then the next Urus without delays. To deliver what the customers are dreaming about for the future of the super sports car. But after big growth in the last few years, I think now we need a phase of stabilization. We need to develop these new products and then start the second phase of growth.

With every supercar brand staring down the barrel of electrification, how does Lamborghini deliver an EV future?

First of all, I think there is a future because of the people developing the future. And for that future, it’s important to tackle the needs of legislation and environment with the expectations of the customers. This is the biggest challenge in my opinion. I see what (Maurizio) Reggiani (Lambo’s R&D boss), Mitja (Borkert, chief designer), and the team at Sant’Agata have imagined, and it’s something that I can really buy into. Unfortunately, I can’t talk more about these products yet as I’ve just landed in the role, so you’ll have to wait some weeks and months before I can make a more detailed statement about it.

How do you retain the core DNA of a Lamborghini in the future?

I think the DNA of a Lamborghini is a super sports car with a design that is immediately recognizable, but also a product that is at the peak of all the competitors by delivering a balance between acceleration and handling attitude. For Lamborghini, this is much more important in my opinion than top speed...even if our top speed is beyond 330, 340 kilometres an hour. Top speed is not the big discussion of tomorrow.

But now we are entering this new period of partial electrification, how do we deliver the power-to-weight and agility? Even with the additional weight of the batteries, it’s something which is important to achieve. I think this is where Lamborghini has a big word to say.

The V12 is one of the things we have to update because it’s core to the history of the brand.

Clearly, there’s an opportunity to be a trendsetter through electrification of the brand? Something the team demonstrated in the Terzo Milennio. Do you think you’re pushing electrification hard enough?

It’s a bit early to talk about this… Due to the legislation, we will have to do some type of electrification, and that will lead to a reset of the competition. The competition must be among the same type of cars. We have to be better than the previous model, whether it is a naturally aspirated or turbo engine. And the new generation, whether it is a hybrid or not, has to be better than the previous one. But also—and this is the bigger challenge—it has to be the best in the segment. And this is what we’ll be able to work on.

How are you going to divide your time between the two brands?

I have to see how I can manage it. I have to reduce the travel time as much as possible, but COVID has helped us understand that you can do a lot via Skype and video conferences. However, at the beginning, I will be heavily focused on Lamborghini, and then I will see how to use my time in the best possible way.

Switching to Bugatti, since your arrival, you have delivered nine different cars, from derivatives of the Chiron to one-off cars like the Voiture Noir...but no second model. Does it frustrate you that you haven’t managed to deliver that?

We were ready to start. We have done all of the things we needed to do, but then came COVID. So, we stopped everything because of a clear rule coming from the Group. A rule very much shared and agreed by us: That during this time of uncertainty, you have to concentrate on survival mode. We were very good in this, because we sold out all the cars for the year 2020, and 75% of the entire production of next year is also allocated. We will see what is coming next...

There’s a lot of speculation around Bugatti. Conversations continue about Rimac buying Bugatti with Porsche, and Porsche increasing its stake in Rimac. Clearly, for an electric startup brand like Rimac to buy Bugatti would be a huge statement in terms of the importance of electrification. What can you say about these rumors?

I can tell you we are not speculating about what we read in the news.

But for Bugatti to have a real future, it will have to deliver an EV. Is that where Bugatti should go in the future? Is electrification what you think your Bugatti buyers are looking for?

A fully-electric car is one of the options we looked into, and which is in my opinion very likeable in terms of acceptance from the customers.

So what does this mean for the Chiron and the combustion engine?

The Chiron is a collector’s item. It’s something that is maybe the last of its kind. It’s about holding or increasing its value over the decades. It’s the peak of current automotive technology. It’s possibly the last time a combustion engine like that can be done. But remember, the average mileage of a Chiron is one thousand miles a year. It’s a low-volume car; less than 100 a year. We are not massively impacting emissions worldwide. So, if it’s possible, we should maintain the combustion engine as long as possible.

What do you want your legacy to be at Bugatti and Lamborghini?

The legacy of myself is not the point—we have to have products that are exceeding the expectations of the customers for future decades to come. One of my biggest wishes is that the workforce, those who are out there, will stay strong and have a job and a good future for their families as well. This is something that is very, very important for me—to have a team that is motivated, dedicated, and secure so that what we’re doing is also insuring their future.

What’s the biggest challenge currently for the brands that you represent?

That we’re not going to be the horses of tomorrow.

How do you continue to be relevant?

We have to adapt to what is the challenge of the future and to create an opportunity out of it. We have engineers, a team, and also our customers; they know what is going to come and understand what this is all about. And if we match all this, we will have cars that are still exceeding the expectations, will continue to exceed those expectations, and this is what we have to deliver.

Talking about exceeding expectations, the Bolide—how does that go from concept to reality?

This is a dream. We were all in agreement that there was something we were missing with the incredible W16 engine. I always said, ‘What if we could do whatever we wanted?’ knowing that the car was not going to be homologated. So, we started the project, and when we initiated it, we said this could also be a series for when the Chiron is ending—something that is concluding the idea of the W16 like we know it today. So, we have a business case with x amount of cars and a price, and the investment, development cost. We have to decide if we want to start it or not. This is something we are going to decide next year.

Throughout your history, you’ve always created one-offs, unique projects, and pieces that have been described as art forms. Can we expect to see Lamborghini and Bugatti electric concept cars that are one-offs to showcase the potential of EVs in the same way that the Bolide articulates the ultimate potential of a W16?

I don’t see BEVs for hypercars or super sports cars now or this decade. So, neither for Bugatti nor for Lamborghini. Maybe close to the end of the decade, and when we know a bit about legislation, acceptance, range, charging time, costs, performance, et cetera. We need to come to a point where we have a better understanding. We might test things out with our closest customers, but we have a constant discussion with them about future developments. I cannot rule it out, but it’s not for the time being. 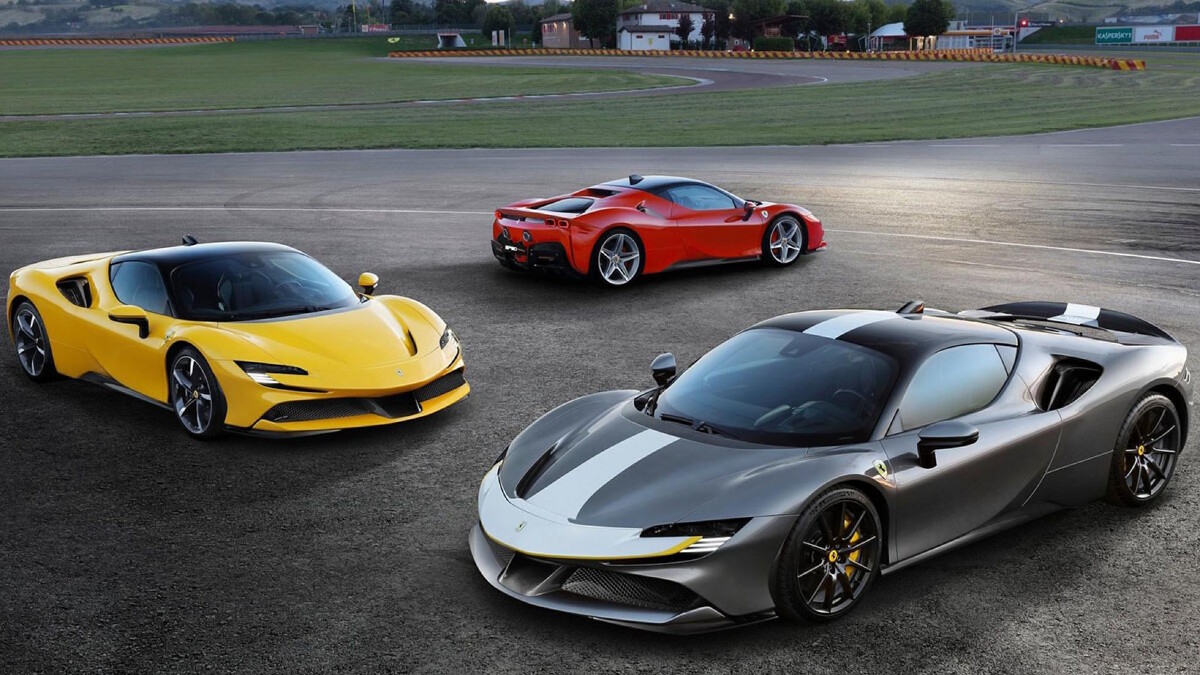 8 Cars with hideously expensive, totally impractical carbon-fiber wheels
View other articles about:
Read the Story →
This article originally appeared on Topgear.com. Minor edits have been made by the TopGear.com.ph editors.
Share:
Retake this Poll
Quiz Results
Share:
Take this Quiz Again
TGP Rating:
/20