We even used 'Mounties'-style uniforms and BMWs
by Richard Wilhelm Ragodon | Aug 28, 2018 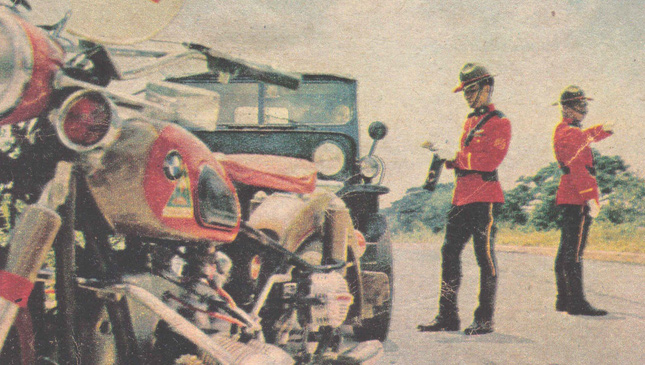 The Philippines was turned over to the United States after Spain signed the 1898 Treaty of Paris agreement in France. As a military government was formed, the Philippine-American War started in 1899. It ended soon after General Aguinaldo was captured in 1901. A Commission Government was created to put into effect normalization and the rule of civilian authority over military rule that was in place since May 1898.

The civilian commission immediately established the Bureau of Insular Affairs that would handle many matters in relation to running a country. New government departments were also established to manage and handle problems on health, sanitation, road construction, and peace and order. The Public Works Departments immediately hired field agents to monitor road and bridge constructions. The Department of Health commissioned scientists and doctors to study recurring sicknesses like cholera, malaria and others. Field inspectors were issued motorcycles as their mode of travel to far-flung areas. Roads were still few and stopover stations for fuel and other needs were nowhere to be found. In 1912, the first year where registration of motor vehicles was required, the first 28 motorcycles were owned by the Bureau of Public Works and the Bureau of Public Health. 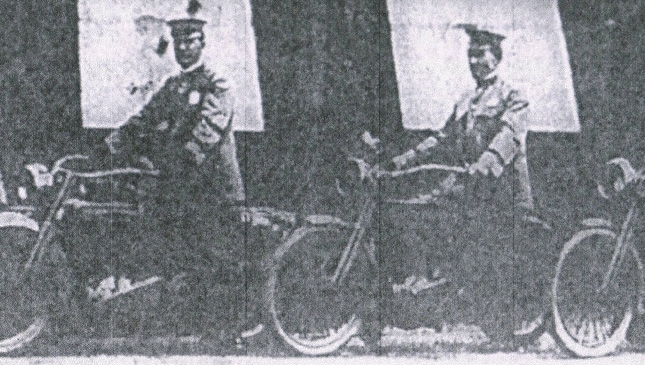 Aside from the Philippine Constabulary, city and provincial police units were also created in 1901. Gone were the Guardia Civil enforcers of the Spanish era. Manila, being the seat of government, had the largest force and the biggest budget. To monitor law and order, patrol squads were eventually created. Initially used were horse-drawn tonneau patrol wagons (aka paddy wagons). Patrol wagon Number One of the Manila police had an unfortunate accident in August, 1910 and was immediately put out of commission. These animal-drawn units were soon augmented with Indian and Harley-Davidson motorcycles. While equipment modernization was enforced early on, many provincial police forces were still using bicycles as mobile vehicles even up to the 1940s.

As population and vehicle density grew, especially in Manila and its environs in the 1920s, traffic congestion and chaos became apparent. With the arrival of efficient and fast vehicles, reckless driving and speeding became serious traffic violations everywhere. In order to counter such dangers, the Manila Police Department created the traffic section that fielded more traffic policemen in arresting road violators and in implementing current traffic rules and regulations. At the time, even the Bureau of Public Works deputized some Philippine Constabulary officers and enlisted personnel to enforce traffic rules and regulations in the provinces.

By the 1930s, the traffic section was upgraded and became the traffic division. Foot and mobile patrol officers were assigned everywhere to monitor traffic situations and apprehend violators. Even truant officers were posted to apprehend vagrant youths roaming the streets at night. Pedestrian crossings and traffic lights also appeared as the 1930s ended. Likewise, more police vehicles were acquired to roam around a 50km radius with Manila as the center. Some were even equipped with early editions of two-way radios. Mantrade, the official distributor of Ford vehicles in the islands, donated the first and only armored car of the Manila Police Department then. A four-door sedan with bullet-proof windows and rifle barrel slits, the car was officially turned over to the Manila Police Department through the city government in 1937. The car was approximately valued at P10,000. The car was last seen during the Japanese occupation with a machine gun turret installed on the roof. 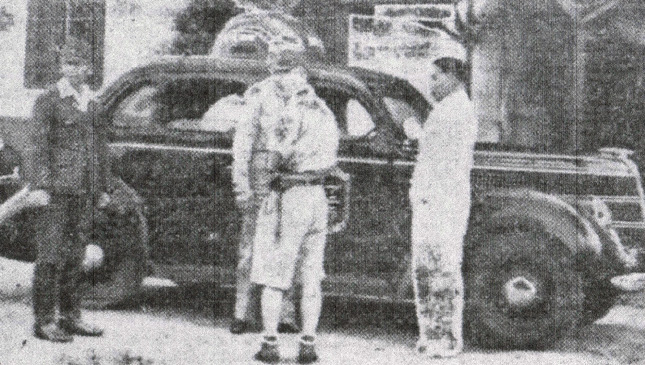 After Bataan and Corregidor fell during the Japanese occupation of the country from 1942 to 1945, the Philippine Army was in disarray. The Bureau of Constabulary was rapidly established in 1942 and replaced the greater Manila police force with the Metropolitan Constabulary. A motorcycle squad was retained and an auxiliary unit consisting of women was organized and integrated into the traffic section. Recruitment commenced in 1942 and posting of new foot patrols and traffic police women appeared early in 1943. Young patrolwomen in khaki dresses and sun-brown helmets were seen at major traffic intersections performing their assigned responsibilities to the fullest. The members of the constabulary disbanded as the American soldiers began liberating Manila in February, 1945. 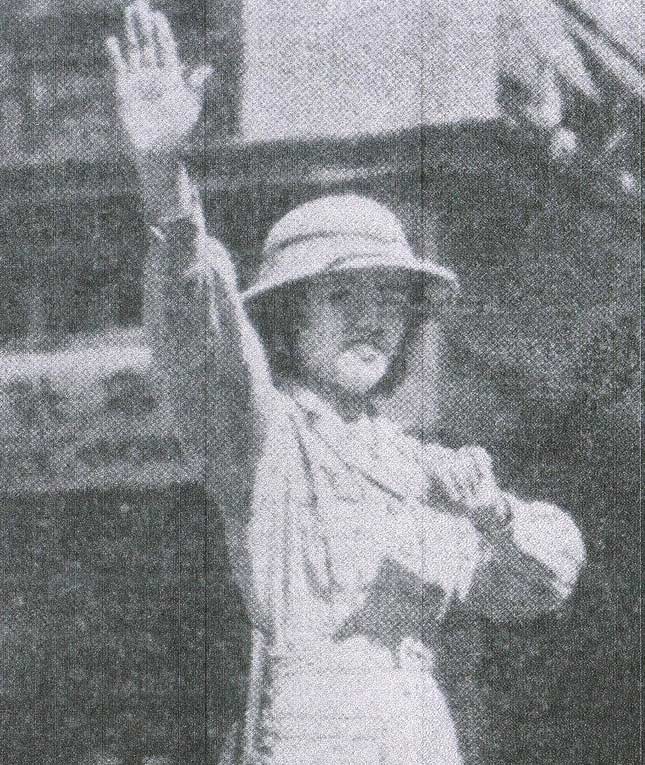 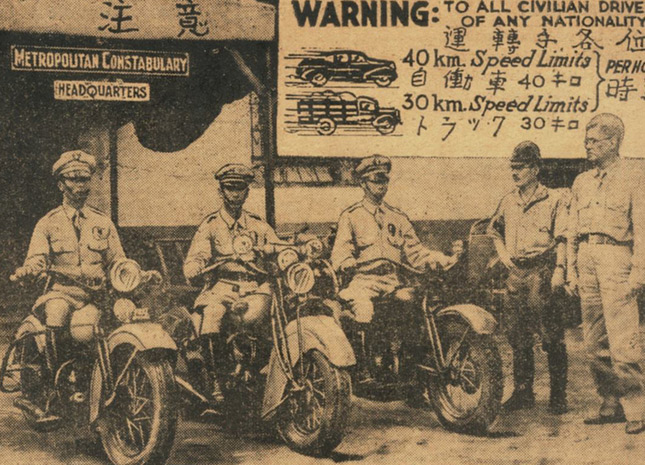 Immediately after the liberation of Manila, the Military Police Command (MPC) replaced the nowhere-to-be-found members of the Metropolitan Constabulary. MPC was given the task to strictly enforce law and order everywhere, especially in places with stragglers and collaborators. Radio patrol car units were activated with the use of surplus military jeeps and weapons carriers with radio sets, vital equipment in expediting outright campaign decisions on the field. When the Philippines gained full independence on July 4, 1946, both the Armed Forces of the Philippines (AFP) and the local police forces were created as deterrents against local and external threats to the nation.

By the mid-1946, provincial police forces began acquiring the needed patrol vehicles originally allotted to the MPC. As cities improved from the ruins of war, old patrol vehicles were subsequently replaced with new cars and motorcycles. The Manila Police Traffic Division bought a number of Plymouth Plaza and Savoy units, and Harley- Davidson Duo-glide motorcycles from 1954 to the early 1960s. The Quezon City police force selected Mercedes-Benz cars and BMW R50 motorcycles as roving units. On the other hand, the Marikina municipal force bought Volkswagen Beetles in the 1960s. 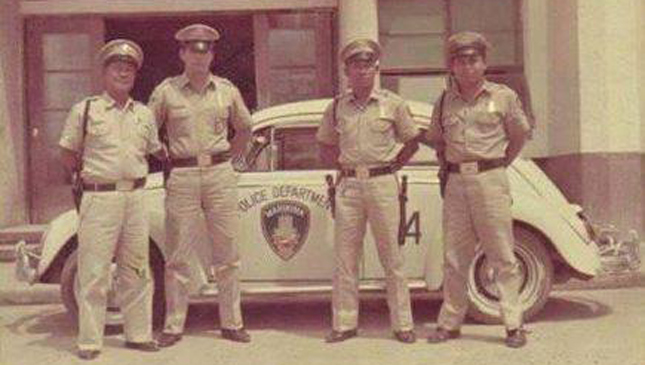 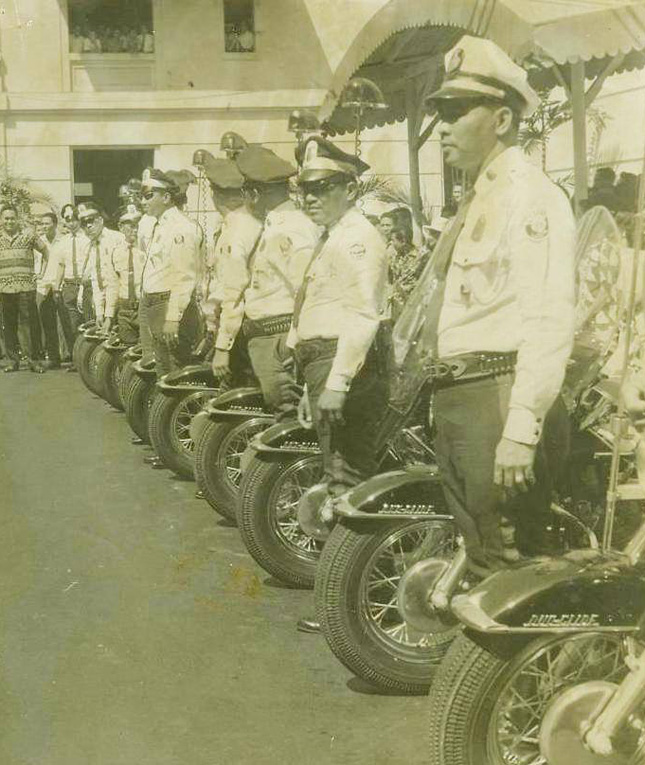 The government retained the PC as a service branch of the AFP from 1946 to 1991. To complement and support the local police force, it was also tasked to enforce law and order on a larger, provincial scale. It eventually established the Traffic Control Group (Trafcon), now known as the PNP Highway Patrol Group (PNP-HPG), to promote safety along the highways in late 1954. The Philippine Motor Association (now Automobile Association of the Philippines or AAP) initiated the posting of high-visibility billboards near sites of major highway or provincial road accidents even as early as 1950. 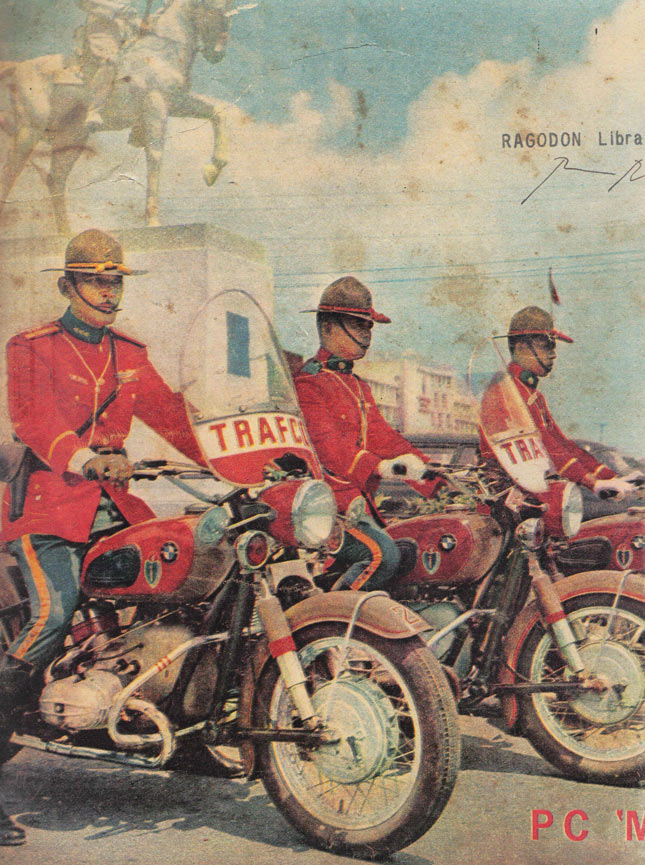 The Trafcon’s initial patrol cars were 12 MacArthur-type jeeps and around 32 Ford Fairlane sedans. Many of the sedans were former US military police pursuit vehicles previously used in Clark Air Base or in Subic Naval Base. Other service units used until the early 1980s were Ford Custom sedans with V8 engines. A motorcycle unit was created in the early 1960s. An inventory of BMW R50 and Motto Guzzi motorcycles were used. They were painted using the color combination khaki and red, the official colors of the constabulary uniform. To enhance road visibility, Trafcon troopers wore uniforms similar to the ones used by the Canadian Mounted Police. The uniforms were complimented with imitation Stetson hats in khaki color as head gear. 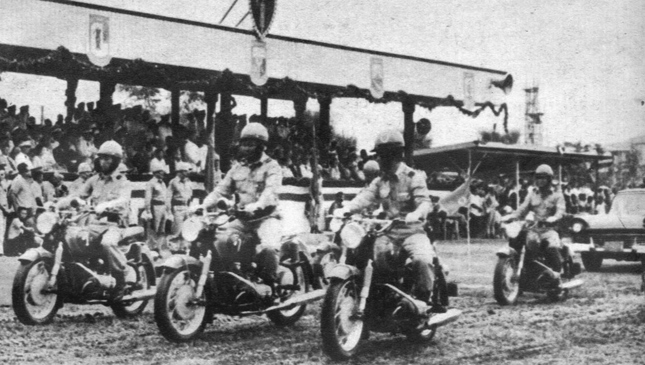 Another Metro Manila-based command was formed in 1967 to counter demonstrations and rallies. The Metrocom (Metro-Manila Command) was formed, and it was a terrifying unit to encounter during the turbulent period of rallies held by both moderate and radicals during the decade. In light blue-grey shades, Metrocom vehicles used were the Toyota Crown, the Datsun 2000 and even the petite Mini-Moke. The presence of these cars in a neighborhood, especially during the Martial Law era, could mean on-going surveillance and even arrest--even without warrants.

All city and municipal police forces were integrated into the constabulary command in 1975. The unified force became the Integrated National Police and Philippine Constabulary (INP-PC) Command. As a military branch of service, it was a part of the AFP. After Marcos fell, Cory Aquino took over. As a result of the People Power Revolt of 1986, the INP-PC Command was dissolved. It was replaced by the Philippine National Police (PNP) force in 1991.

Today, only the HPG and the Presidential Escort Battalion use big bikes with engines that are 400cc and above in patrolling highways and escorting VIPs like the president and other dignitaries here and there. While white is the standard color of all escort motorcycles, they included internationally followed accessory equipment like blue and red light blinkers, a public address system (or bull horn), sirens, and two-way radios.

Throughout the history of law enforcers, these men and women have been accorded different names due to necessity or to expediency. However, their main mission remains the same: To serve and protect. Such an endeavor is carried on in boundless determination--no matter what the odds are. While we have to accept that there are shenanigans in our government institutions, we cannot deny that many of our countrymen who work there still enforce the law with integrity. Thus, we can reciprocate by also respecting and following the rules of the road. The same approach can also be extended to others agencies like the MMDA, whose traffic enforcers exert extra effort and overtime to guide and assist us. 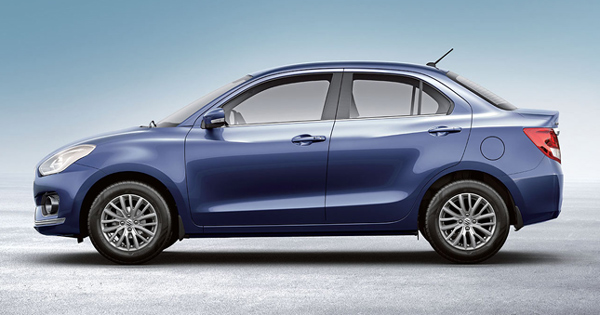 5 Subcompact sedans you can own for under P12,000 a month
View other articles about:
Read the Story →
This article originally appeared on Topgear.com. Minor edits have been made by the TopGear.com.ph editors.
Share:
Retake this Poll
Quiz Results
Share:
Take this Quiz Again
TGP Rating:
/20