Have your own say by taking the poll
by Vernon B. Sarne | Feb 21, 2012
CAR MODELS IN THIS ARTICLE

For something that plays a major role in the way we drive, the steering wheel is probably one of the most unappreciated parts of the car. We see lists ranking the most beautiful cars, the fastest acceleration times, the best safety equipment, the most fuel-efficient engines, even the best-sounding audio systems--but never the best (or at least most attractive) steering wheels.

Here, we attempt to find the best tiller in the automotive industry. And what better way to do that than to gather the steering wheels in the supercar segment? Full disclosure: We haven't personally tried every single one of these. For the most part, we are judging these wheels based on their design and visual impact. To be ranked favorably, a helm needs to be tastefully styled (as opposed to being garish), well-placed within the cockpit layout, and simply effective in inspiring the driver to step on the throttle.

We shall list these state-of-the-art steering wheels beginning with the lowest-ranked all the way to our top choice. If you don't agree with our pick, there's a poll below that allows you to have your own say on the matter. And, of course, there's always the comment box.

We get that Jaguar is a luxury brand, but the XK is a two-door grand tourer. Plus, this is the R-spec'd version, so its steering wheel should possess more sportiness than just the token R badging. The solid-black leather and the brushed metal on the horizontal spokes also have "delicate" written all over them. Overall, this tiller says "ride shotgun," instead of "drive it like you stole it." 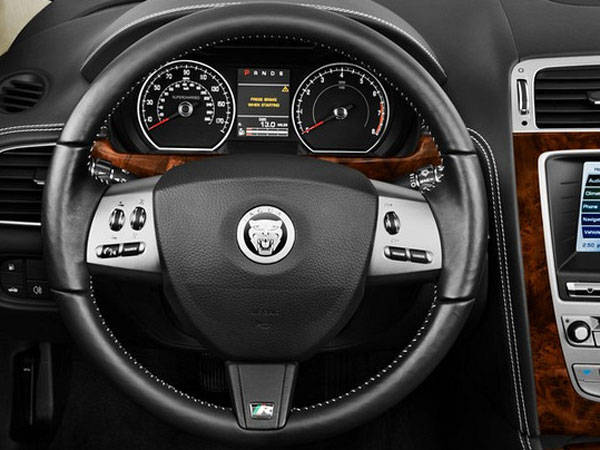 This steering wheel, with its traditional three-spoke layout, isn't bad. It actually looks decent. You just kind of wish it had more aesthetic oomph to it. This automobile, after all, could very well be the best all-around driver's car of the lot. The Porsche faithful might howl in protest, insisting that the no-frills design of this helm is all they need to leave everyone else in their billowing dust. Sure. But that won't change our opinion that there are many others more interesting and definitely more engaging than this Alcantara-wrapped thing. 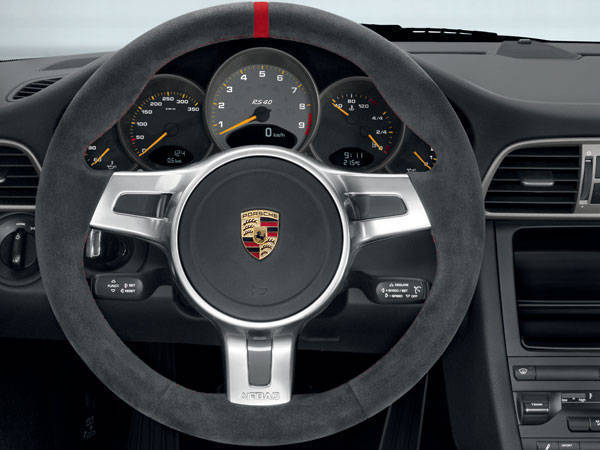 We can't quite put our finger on it, but there's something gloomy about the appearance of this steering wheel. Maybe it would look better with a color accent here and there. The racetrack-worthy design is okay, but the vibe that this tiller evokes is depressing. It's like every element has been muted and toned down. You need something more vibrant on the open road. 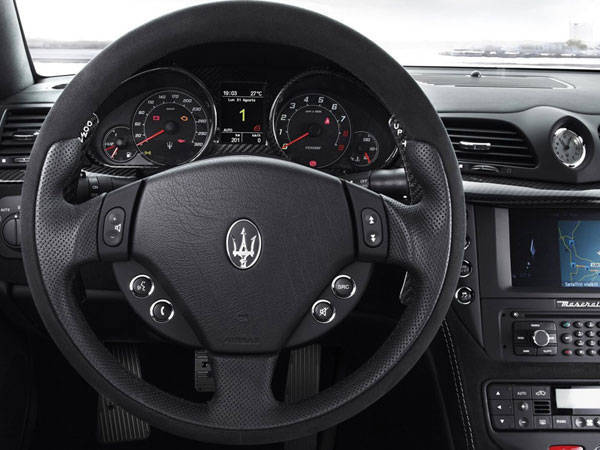 We would have ranked this higher if not for the slight but still discernible weirdness of its shape. The overall form is a clash of adjectives. It's sort of pretty but also sort of grotesque. It's sort of mean-looking but also sort of cartoonish. Even the base of the wheel can't seem to decide if it's arched or flat-bottomed. 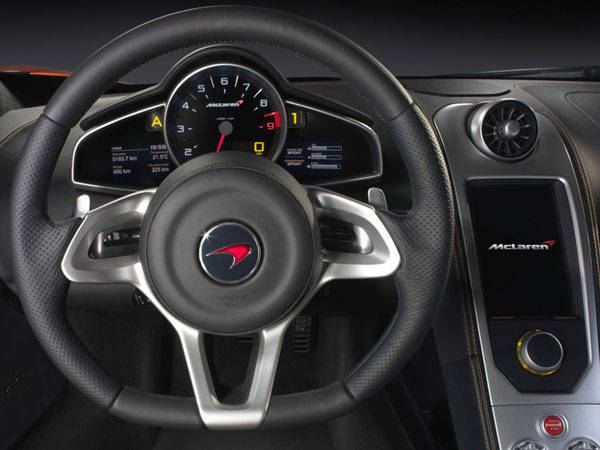 We like the design and the arrangement of the control buttons. We also approve of the M badge's confident subtlety at the bottom of the vertical spoke. Without a doubt, this would have cracked the top five if the wheel were a bit meatier. 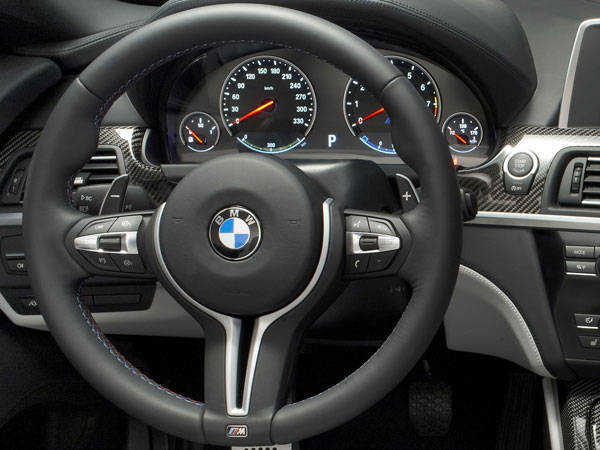 Finally, the first really flat-bottom steering wheel on this list. The Alcantara material is a truly nice touch, and the "R8 GT" badge looks elegant. The exaggerated thumb rests are also a sight to behold, and the control buttons occupy almost negligible space. We just find the Audi-logo-adorned hub too big and too plain for our taste. 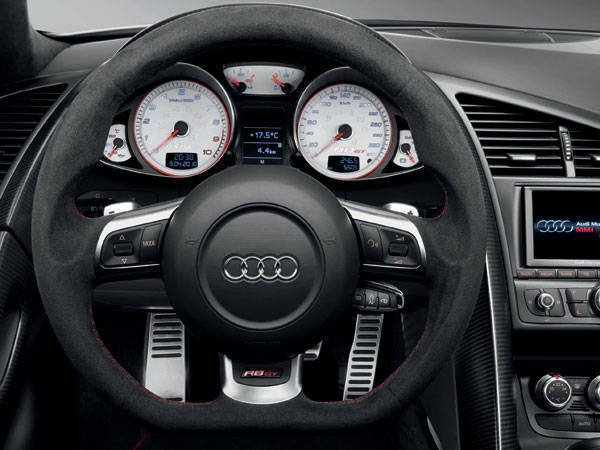 This is one beautiful steering wheel. Sporty but at the same time swanky. Simple, uncluttered layout. If you look carefully, there's even a hint of a Formula 1 car's nose. The spiffy contrast between the predominantly black color and the matte metal is also worth noting. 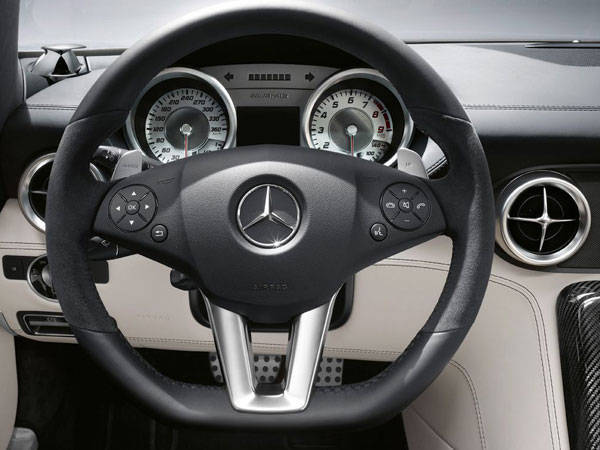 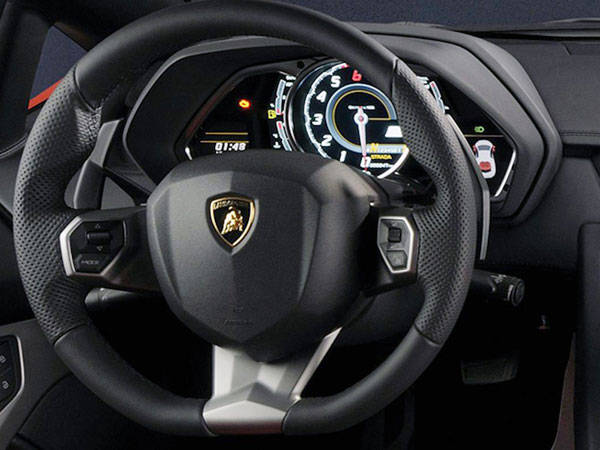 Allow us to read your mind right now: "How can this steering wheel be ranked second? What can possibly top this?" Relax. We'll get there. In the meantime, let's discuss the merits as well as the lone demerit of this tiller. Truth be told, we're at a loss for words trying to describe this thing. It's just...wow! Every detail of this steering wheel seems designed to tempt you to drive like a maniac. The engine start button and the Manettino dial make you feel like you're in a video game. Actually, they have indeed replicated this for the Xbox 360. It's that playful-looking. And that--in our eyes--is also its own failing. This helm is too handsome for human prose, but it also looks like it's trying too hard to give you an adrenaline rush. It's so pretty but also so feature-packed that there's always pressure to mind all the elements in order to fully maximize the driving experience. 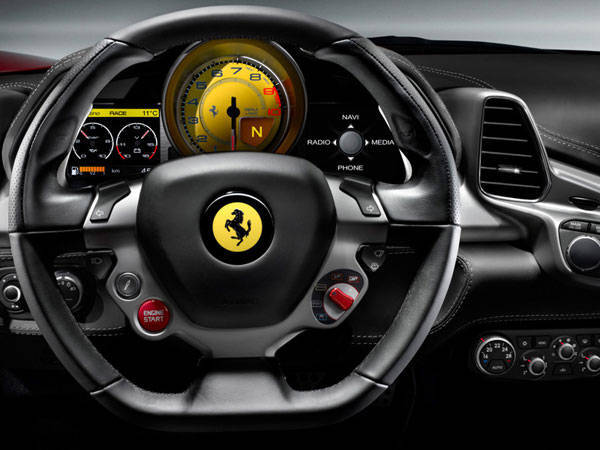 Ah, here it is. Simply the best--not the most gorgeous, mind you (see number two for that)--steering wheel in the world right now. This thing is compact with a diameter of only 360mm, guaranteeing unparalleled entertainment to anyone lucky enough to have the opportunity to turn it lock to lock. We love the use of carbon fiber as well as the sporty contrast provided by the red leather material, giving the viewer the illusion of an aircraft tiller. And we commend the designers' self-restraint. With a hypercar carrying the price tag of nearly two SLS AMGs, it's easy to fall into the let's-make-this-look-out-of-this-world trap. Instead, they chose the path of sobriety, giving the LFA's steering wheel just two control buttons and not much else. They did this, we presume, so you could concentrate on your driving. Which, if you think about it, is what unadulterated motoring fun is all about. 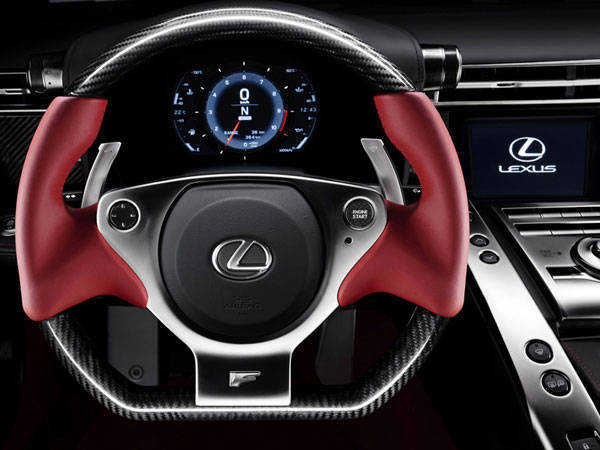 If you don't agree with our pick, you may express your thoughts through the poll and the comment box below.

Tanner Foust on \'The Bourne Legacy\', driving in Manila and Top Gear USA
View other articles about:
Read the Story →
This article originally appeared on Topgear.com. Minor edits have been made by the TopGear.com.ph editors.
Share:
Retake this Poll
Quiz Results
Share:
Take this Quiz Again
TGP Rating:
/20