Past and Curious: What's the deal with windshield stickers anyway?

Current windshield stickers are used by both public and private entities to indicate that vehicles they are operating are legally allowed to use either public (national) or private (subdivision) roads. Since the 1960s, government institutions, private schools, corporations, and clubs have also adopted the use of stickers to monitor and control the entrances and exits of vehicles to their premises for security reasons.

In certain instances, special events stickers have been given to VIPs, media, and others to access certain venues like presidential inaugurations and visits of dignitaries. These official or government stickers were likely issued either by the Office of the President or by the Department of Foreign Affairs, respectively. Special events stickers were normally printed on paper and attached to the inside part of windshields with cellophane or masking tape.

As ephemera—or one-time use items—many stickers have been discarded. Not many have survived the ravage of time. As motoring heritage memorabilia, they are considered collectible items now. With no complete database about them available, enthusiasts and  automobilia collectors are oftentimes clueless about when they were issued.

The introduction of local vehicle windshield sticker dates from the war years, 1942 to 1945. With no previous arrangements made whatsoever, the United States and the Philippines simultaneously introduced the stickers in 1942. The former used it as a gasoline-ration sticker while the latter used it indicate that a vehicle was registered. The Japanese Military Government was responsible for the introduction of the paper sticker that lasted until 1945. The 1942 and 1943 paper stickers came out with Nippongo characters. Issues from 1944 to 1945 had Tagalog words all over and supplemented with a Nippongo character. 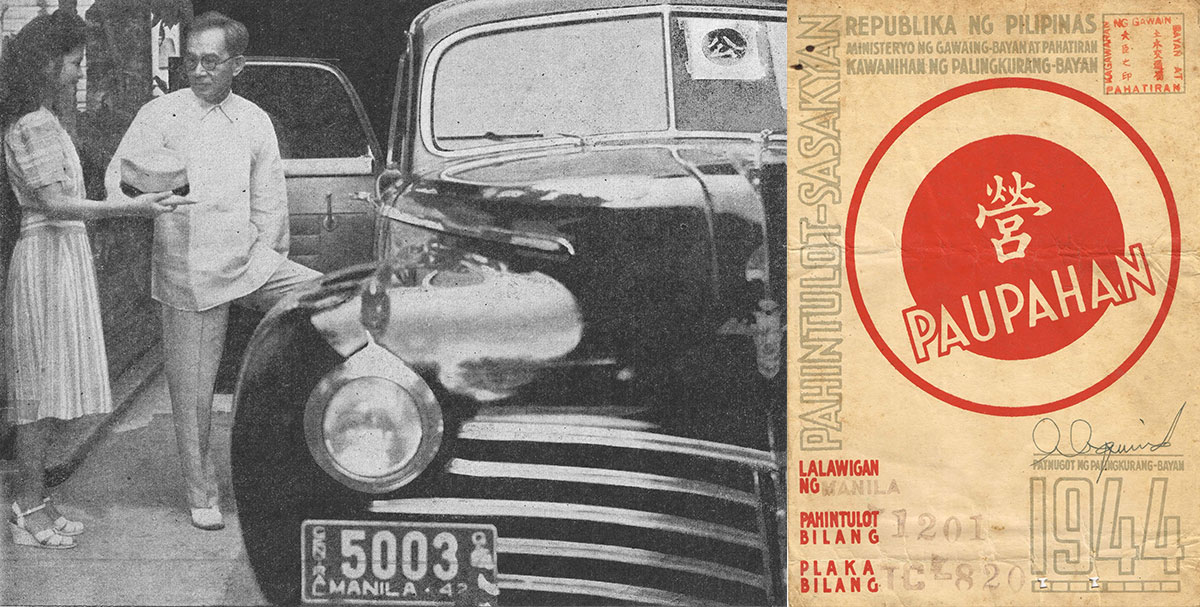 Take a look at the registration windshield sticker attached to the car of Jose P. Laurel in 1942 (above). He became president of the Japanese sponsored Philippine government from 1943 to 1945. Note the 1942 license plate and the Japanese character written on the paper sticker. On the right is a 1944 windshield registration paper sticker indicating the kind of vehicle is registered. In this case, it is a vehicle-for-hire (paupahan). Note the lone Nippongo character at the center of the paper sticker.

With the complete liberation of the Philippines and Japan’s unconditional surrender on September 2, 1945, the issuance of the early-1945 windshield sticker, which was distributed as early as December 1944, was canceled by the Philippine Commonwealth government in place in Manila since March 1945. This writer did not encounter any windshield sticker issued from 1946 to 1965. It can be presumed that the Land Transportation Commission did not come up with stickers during the mentioned years.

Registration windshield stickers were again introduced in 1967. Instead of the usual paper material, a plastic sheet with an adhesive backing was offered. Commemoration logos were added in the 1967 and 1969 windshield stickers. On the other hand, environmental and political campaign mottos appeared from 1994 onwards. The stickers above have slogans for the International Travel Year and the General Aguinaldo Centennial.

On the left is the rear of the 1994 windshield sticker campaigning for a pollution-less Philippines. On the right is the political slogan of former President Fidel V. Ramos.

Temporary plate numbers issued to newly bought vehicles with no permanent plates yet were replaced with conduction windshield stickers by the 1990s. The conduction sticker allows a new car owner to use his unit on public roads while his car’s permanent license plate is still being processed or finalized. The three-year advanced registration sticker was introduced in 2007.

Above is a temporary plate number issued in 1966 and a conduction sticker issued in 2012.

The use of Radio Frequency Identification (RFID) stickers was briefly introduced in 2014, but was stopped due to public clamor. But in 2015, no sticker was issued. This was the year when the transportation agency was in crisis. The introduction of present petite windshield stickers only resumed in 2016.

In relation to vehicle license number registration stickers, early ones were introduced in 1967. Initial issues were metal tabs that were attached to the 1966 plate number. The 1966 plates were built with punctures as anchorage for the anticipated 1967 tabs. This method was used until the issuance of 1969 license plate numbers. 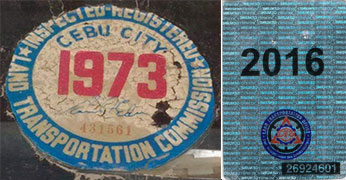 New license plate designs were introduced from 1970 to 1972 that made the tabs unnecessary. As a replacement, license plate registration data in the form of a sticker was issued from 1973 onwards, and only to be canceled in 2015. Today, the only valid proof that vehicles are currently registered is the small windshield sticker printed with the corresponding security markings and holograms.

Here are a few more samples of stickers from the past. Do you recognize any of them?

The Auto Pass was issued during the visit of Pope Paul VI in 1970. This is an Ateneo de Manila University gate pass for School Year 1977-1978. And here's a Nichols (now Villamor) Golf Club pass for 1980.

Do you have photos of old stickers that you want to share? Send us an email or leave a comment. 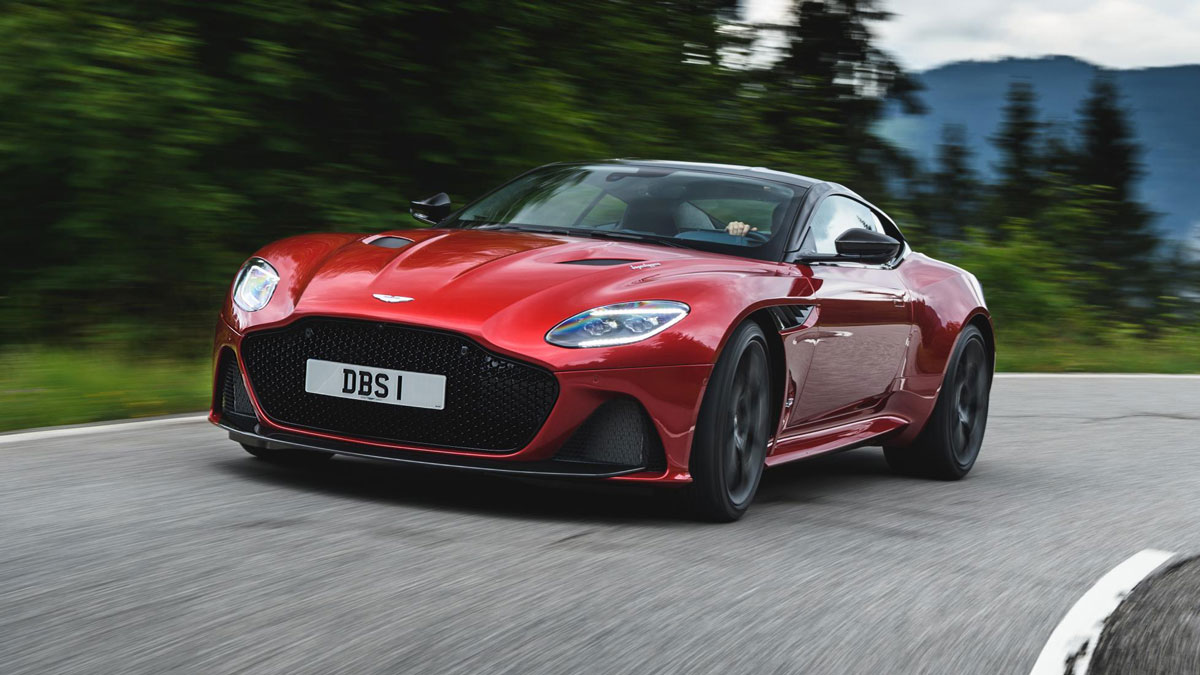 There will be four Aston Martins in the new Bond film
View other articles about:
Read the Story →
This article originally appeared on Topgear.com. Minor edits have been made by the TopGear.com.ph editors.
Share:
Retake this Poll
Quiz Results
Share:
Take this Quiz Again
TGP Rating:
/20