Its jeepneys are still chugging along
by Paul John Caña for Esquiremag.ph | Dec 5, 2020

It’s difficult to come by any solid numbers on just how many jeepneys there are in the Philippines. According to an NPR article from 2018, estimates vary from 180,000 to 270,000. About 75,000 of those are crammed in Metro Manila.

While we can’t put an exact number on jeepneys, what’s not hard to imagine is that a sizable majority of that number was crafted by Sarao Motors. Arguably the first and last name in jeepney manufacturing, the company founded by Leonardo Sarao in the ’50s is synonymous with the ubiquitous vehicle—a national symbol not just of transportation in the Philippines, but of the Philippines itself.

A jeepney undergoing repairs at the Sarao facility in Las Piñas 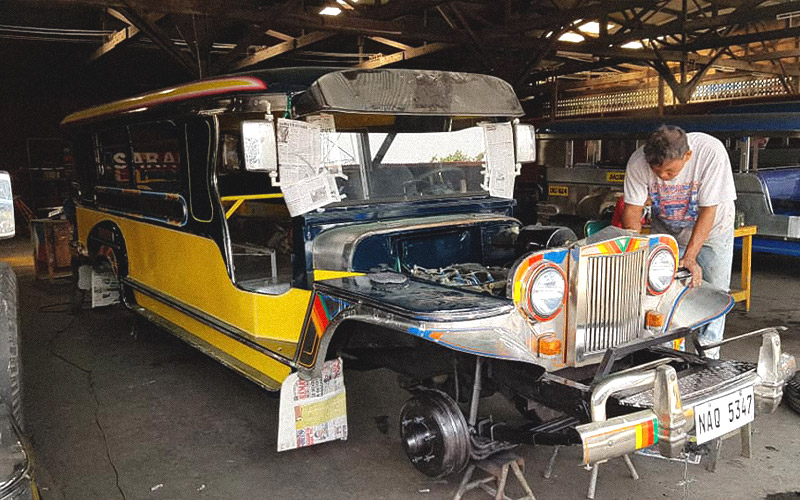 But it’s no secret that the fortunes of the company that built up such an iconic, truly Filipino product has dwindled in recent years. The vehicle maker is still around, but the once-mighty brand name is but a shadow of its former self. What exactly happened to Sarao Motors?

The roots of jeepneys in the Philippines are well-known. A highly modified version of American military jeeps from World War II, the jeepney evolved to become civilian transporters in the late ’40s to early ’50s. They eventually became the dominant means of public transportation in the country.

In 1953, Sarao, who used to ply the streets as a calesa driver and also worked at an automotive repair shop, cobbled together P700 to establish a jeepney manufacturing company. Helped by his brothers, Sarao worked to build a reputation as a dependable maker of jeepneys. It is his design that is often cited as the progenitor of the modern jeepney—a roof, stretched rear, and an opening at the back where passengers can get on and disembark. It took the Saraos about two years before the first jeepney rolled out of the backyard factory. According to the Straits Times, “it was painted red. Its marque was a small, silver mustang that stood on the bonnet. Long, thin strips of plastic in garish colors billowed out on all sides.”

Leonardo Sarao used to be a calesa driver, which is why Sarao’s symbol is of the horse-drawn carriage. The Sarao family has also kept the founder’s original calesa 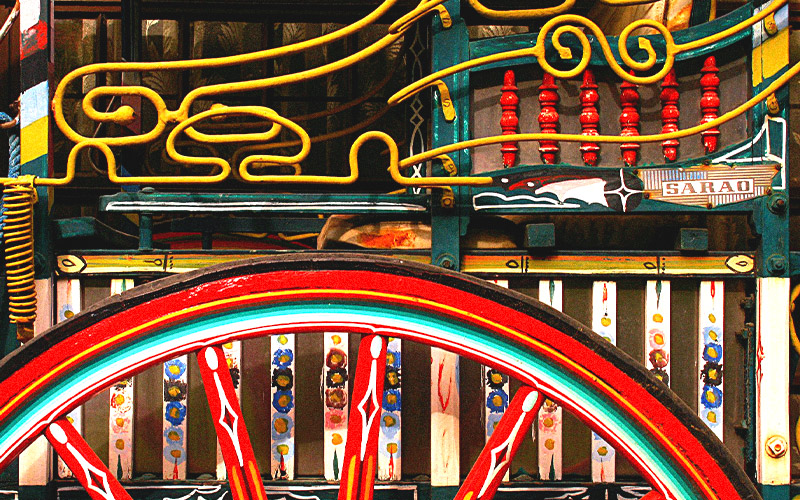 The burgeoning industry attracted many players over the years—some notable ones include Malagueña Motors, Alchris, Morales, Hataw Motors, Lippad, A. Borja, and many others—but none could compete with the original. Sarao Motors became so popular that the government promoted the brand as a symbol of the Philippines—what the yellow cab is to New York and the red double-decker bus is to London.

At its peak, Sarao Motors produced as many as eight to 12 units a day, according to Edgardo S. Sarao, a son of Leonardo who now runs the company as a production supervisor. A Reuters report claimed even bigger numbers: 18 to 20 units a day, and as many 400 workers in its manufacturing facility in Las Piñas.

“We were selling jeepneys like they were toys,” Andres Bartiz, a welder at Sarao Motors told The Straits Times.“People would walk in, pick a jeepney, pay in cash, and then drive their new jeepney home.”

But then the Asian financial crisis hit in 1997, which caused the peso to fall against the US dollar. This, in turn, doubled the price of secondhand engines, transmissions, and steering wheels imported from Japan. In a BBC story from 2013, an official from the Asian Development Bank pointed to financial difficulties as the primary reason for the company’s decline. Jamie Leather, ADB principal transport specialist, said jeepneys are “more expensive to operate and repair than other vehicles on the market because they don’t have standardized parts that are readily available.”

“Passengers also prefer air-conditioning that other vehicles provide. They see it as more comfortable,” Leather added.

One of Sarao’s craftsmen paints a jeepney. Sarao now only has about 50 employees from a high of 400 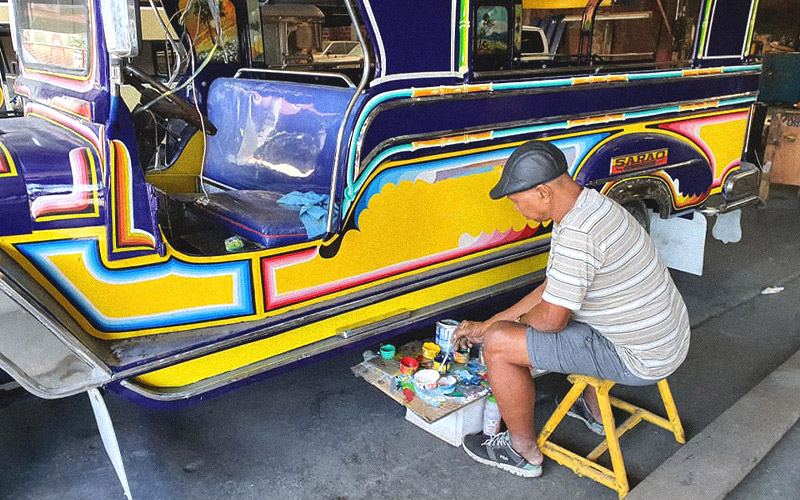 It didn’t help that the government stopped issuing new franchises for jeepney drivers and operators in the late ’90s, which drastically cut down the demand for new jeepneys.

In October 2000, Sarao Motors was forced to halt production and made the difficult decision of laying off about 250 workers. In an interview with the Philippine Daily Inquirer, Sarao also blamed high production costs, low sales, and rising wages for the closure.

But the closure didn’t last long.

“We resumed after two weeks due to demand (for) the jeepneys,” Sarao tells Esquire Philippines. “We had loyal clients and regular ones demanding our services and maintenance for their fleet,” Sarao says they downsized the whole operation, retaining only a few selected workers. All the rest were laid off permanently and were given generous severance packages based on how long they had served the company.

“We then reorganized our production flow,” he says.“We also did some revisions on the design of the jeepney and structural frames. From the outside, it’s still a jeepney but underneath we did a lot of changes.”

As for the output, Sarao says he can’t provide exact numbers as it depends on demand.

“I remember from the start of the year 2000, we did around 80 to 100 units annually. Then the number decreased every year due to restrictions from the (Department of Transportation) and freezing of franchise by the LTFRB.”

Today the automotive manufacturing company with the iconic name is still around but is operating on a much smaller scale. With around 50 employees including office staff, Sarao, who is an architect by profession, says they mostly work on other projects, particularly starting in the year 2008. They can manufacture pretty much anything with wheels, including andas and karosas (a portable statue base commonly used during parades or processions), food stations, kiosks, resort displays, “even offices and buildings.” 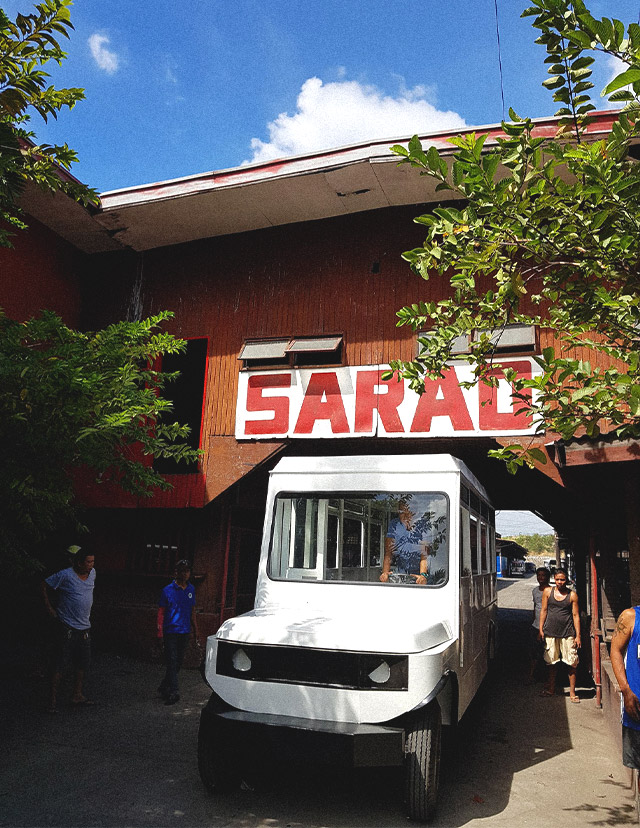 “We’ve slowly (transformed) our company to do special projects,” he says.

But of course, they still also work on jeepneys from time to time, sometimes for export. The company also operates its own fleet of public utility jeepneys (PUJs) around Las Piñas and some parts of Metro Manila.

“We still have our old address, and tourists, students, and media still flock to our place, of course, this was before the pandemic,” he says.

The government has pushed for a jeepney modernization program for years in order to replace the aging jeepney model with a more environment-friendly version. This has been met with varying levels of resistance, particularly from drivers and operators, who insist that electric jeepneys that the DOTr is proposing are too cost-prohibitive and are, therefore, anti-poor.

Sarao Motors has not been idle in this regard. In 2018, it partnered with a local electric vehicle manufacturer to develop and manufacture a prototype electric jeepney called the GP Sarao.

The GP Sarao is a prototype of an electric-powered vehicle 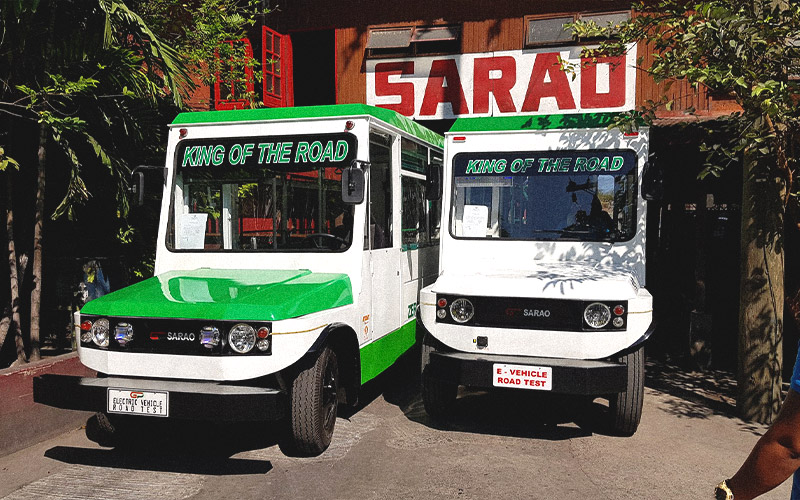 “We also did a jeepney that runs on natural gas,” Sarao says.“The electric is more environment-friendly because of zero emissions, but it’s expensive. We also did a few tranvias around Metro Manila with a jeepney platform.”

Sarao pledged to keep the company moving forward through products that are more friendly to the environment. At the same time, he says Sarao Motors will continue to produce traditional jeepneys, which he says there is still a demand for.

“Hopefully there will be companies that would like to team up with us on our quest for a better future in our local transportation industry,” he says. 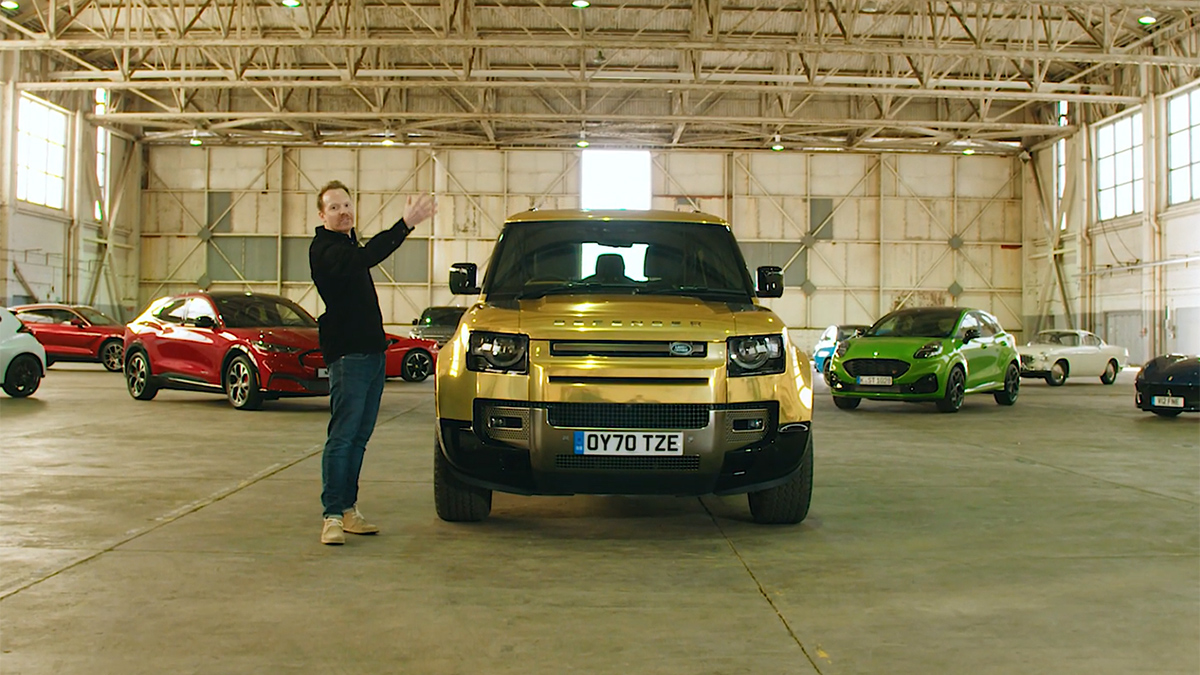 So, how were the winners of the Top Gear Awards in the UK chosen this year?
View other articles about:
Read the Story →
This article originally appeared on Topgear.com. Minor edits have been made by the TopGear.com.ph editors.
Share:
Retake this Poll
Quiz Results
Share:
Take this Quiz Again
TGP Rating:
/20