For the fifth edition of the Toyota Road Trek, there were no fancy new vehicles--just the good old Innova and Vios. And lots of driving through green scenery
by Dinzo Tabamo | Jul 1, 2009
CAR BRANDS IN THIS ARTICLE

One Friday night, my Summit Media officemates and I watched a movie we knew little about. All we knew was that it starred Nicolas Cage and the movie was called Knowing. It was a surprisingly good flick, but the most interesting aspect was its premise: Is everything predetermined or random? Are the coincidences in our lives evidence of a higher power overseeing our existence? Or are they just random circumstances that we assign meanings to? Should we believe in signs?

I like thinking about topics like this during long drives, especially when I'm the only person awake in the car. I found myself in this situation during Day 2 of Toyota's fifth annual Road Trek. We had just eaten lunch at Lake Balanan in Negros Oriental, and my teammates--TG art director Jaykee, FHM's Allan Madrilejos and Magic 89.9's Boom Gonzales--succumbed to the succor of sleep in our Toyota Innova.

TG EIC Vernon was with the team combo of The Philippine Star and The Manila Times. Their team could be considered Top Gear, too, because two of Vernon's companions--Brian Afuang and Dong Magsajo, the motoring editors of the two aforementioned broadsheets--also write for us.

As we were driving along the smooth Negros roads, our police escorts made our convoy zip by the towns quickly. We felt like congressmen, but without the wealth and hubris.

Through the years, the Toyota Road Trek has earned a reputation for its destinations, challenges and great drives. This year's trip was more subdued, perhaps a reflection of the tough financial times that didn't spare even mighty Toyota. We were a smaller media contingent, and the whole event lasted for just three days instead of the usual four.

Was it a diminished experience? Let's review.

On Day 1, we touched down at the new Bacolod airport and went to our assigned vehicles for the day. The Toyota vehicles highlighted for this Road Trek were the Vios and the Innova. We got a Vios for the first day. Between my size and Boom's build (which looks like it bench-presses a Yaris every morning), it was a snug fit. But the Vios managed to swallow us and all our luggage comfortably.

I assumed driver duties and we drove to our first destination, Toyota Bacolod. This was also where the first challenge was held. Upon arrival, we were fed tasty snacks of butterscotch bars, native piaya and napoleons--a square, layered puff pastry with a creamy custard filling in the center and topped off with glazed sugar.

While we were eating and increasing our chances of diabetes, the mechanics of the first challenge were explained. We were to collect randomly hidden cards with environmental messages printed on them. At the signal, our team scoured the whole dealership but found only two cards. We were disappointed because we needed eight to get the most points for this challenge. Had it been a piaya-eating contest, the other teams wouldn't have stood a chance.

After lunch, it was on to the second challenge. We drove up the winding mountain roads in the municipality of DS Benedicto, where the fickle weather decided to change moods like a girl with PMS. After a sunny morning, the skies turned gray and rain eventually poured down on us.

It was a shame that taking photos was difficult. The scenery was very nice--lush greenery and mountains obscured by rainy mist framed the winding road. The Vios's 1.5-liter engine and its accompanying 107hp acquitted itself nicely on the twists and turns, despite carrying passengers with bellies full of mussels, scallops and shrimp from the lunch earlier. The short wheelbase made the compact sedan fun to drive, easily turning when prompted.

When we neared the top, our team radio crackled to announce that the second challenge was about to begin. The event organizers had placed nine signs by the roadside, with each sign depicting a safety or environmental message. We were to guess what the nine signs meant and write them down. Some were familiar, like the biohazard sign, the crossbones symbol and the recycle logo. But we debated on the rest of the signs, and our answer sheet was full of erasures. We were happy with the team effort on this challenge, but we felt we needed some sure wins to land us a spot in the winners' circle.

From the mountains, we descended back to the plains, and we stopped briefly by ECJ (Eduardo Cojuangco Jr.) Farms before heading to the Kabankalan Municipal Hall for the final two challenges.

The six media teams were split into two batches and herded to separate staging areas. Our challenge area consisted of a tub full of live crabs, pairs of gloves and three empty pails placed several meters away from the crab tub. To quote Jedi Master Obi-Wan Kenobi: "I have a bad feeling about this."

Each team was provided with only three pairs of gloves. The fourth team member was given a stick to prod the crabs toward the gloved hands of his teammates. I was given the latter task (sigh of relief), while Boom, Jaykee and Allan resolved to prove themselves worthy of their gloves. A mixture of techniques were employed: Some held each claw apart and lifted the crab, others pushed the claws in and held the whole crab. Matt Mallari from the Motoring Today team had a knack for dropping the crabs on Allan's sandaled foot, a technique that didn't sit well with the FHM editor.

A couple of finger wounds later, we went to the next challenge, which the other three teams were still doing. We saw Vernon at the top of a truck full of sugar cane, stuffing stalks into a sack held by his teammates. When a sack was full, it was loaded into an Innova that was on standby. The team that ended with the heaviest haul naturally won the challenge.

When our turn came, Boom went up to the truck and we readied ourselves with the provided sacks. The challenge started and we steadily filled the Innova with sweet stalks of Negros's main produce. When it was time to weigh each team's haul, we realized ours was far from being the heaviest.

Before we knew it, the challenges were already over. We tried to score high, we had fun, and we shared another memorable experience with our motoring colleagues. It was time to head to our resort and relax.

Our first overnight stay was in Punta Bulata in Cauayan, Negros Occidental. It's amazing how Toyota manages to find nice resorts like this tucked in the corners of the country. The food in Punta Bulata wasn't good--it was great. There was lechon, grilled prawns, marlin and the Negros specialty, chicken inasal.

I was watching Boom eat when I realized where he got his nickname. There would be a full plate of shrimp before him, I'd look away and eat a few bites of my lechon, and when I glanced at him again--boom!--only shrimp shells remained.

After dinner, the band came on, the beers came out, and we all started filling up with high-octane alcohol. When the band's set ended, Vernon whipped out his iPod Hi-Fi boombox/life partner. As our blood alcohol went up, the songs became cheesier. At one point, we found ourselves all belting along to Sharon Cuneta's ‘To Love Again' (yes, from Vernon's iPod). I still don't know how to describe the experience.

The next day, the vehicles were shuffled, and our team was assigned a roomier Innova on our way to the lunch venue that was Lake Balanan. The way to the lake wasn't a proper road anymore--it was more like a rally course. There were muddy surfaces, loose rocks and broken paths. Wow, I thought Toyota must have faith in the Vios and the Innova. These vehicles didn't have four-wheel-drive systems like the Hilux or the Fortuner. I then had newfound respect for the Innova, because despite its seemingly inadequate 2.0-liter, 136hp gasoline powerplant, we were taking the dirt trail at a quick pace.

We gorged on more local food, then headed to our last overnight destination. Inside our team's Innova, there was a battle between the jarring, uneven road and our post-meal drowsiness. Sleep won hands down, which was how I found myself alone and ruminating.

The Negros province zoomed by the windows, and--as with all good road trips--I took advantage of the respite from the shoots and deadlines, and simply relished the personal introspection.

In the afternoon, we arrived at the Atlantis Dive Resort in Dumaguete, another oasis discovered by Toyota. There was enough time to swim in the pool, then shower and change before dinner and the awarding ceremonies. As we were finishing our meal, I realized the Road Trek was about to culminate, and I went back to my earlier question: Was the experience diminished?

At first, the answer seemed to be yes. Toyota's event had become a victim of the scope and ambition of the previous editions. It was getting harder and harder to top it year after year.

But as I looked around me, everything still felt the same. Some guys were ogling the fire twirlers; the Toyota top brass were drinking with us; Toyota girls Elijah Sue Marcial, Ana Agregado and Paulyn Dalisay were as pretty as ever; and we were all in a new destination talking about the great drives we'd had.

The answer is no, then. The experience might have been different, but given the fact that it still happened--despite an economic downturn that was beseting the global auto industry--it was still a magical experience.

As the winners of the challenges were being announced, we were surprised to hear our names called. Our team finished third, but we were totally elated nonetheless. It turned out we'd aced the sign-reading challenge, and that pulled our average score up.

Maybe it was predetermined that we place third, the combination of our individual efforts and accomplishing the challenges all coming together with the right pieces for our small victory. Or maybe we were just lucky, a random throw of the dice.

Whatever it was, I learned one thing: You may not believe in them, but it never hurts to pay attention to the signs. 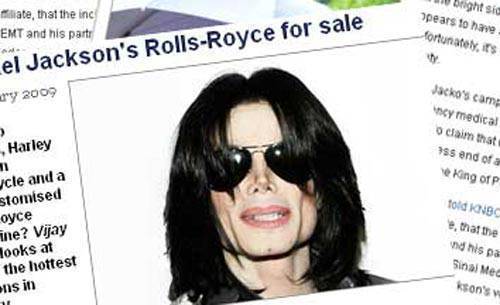 5 cars in Michael Jackson's life
View other articles about:
Read the Story →
This article originally appeared on Topgear.com. Minor edits have been made by the TopGear.com.ph editors.
Share:
Retake this Poll
Quiz Results
Share:
Take this Quiz Again
TGP Rating:
/20