Toyota PH has a challenge for students: Sell our bestselling Vios even better

Winners of the Toyota Young Marketeers Challenge get a trip to Japan
Oct 11, 2019
ADVERTISEMENT FEATURE
What is an Advertisement Feature?
Follow TOYOTA on
Website:
http://toyota.com.ph/

How do you sell a car that’s already selling like hotcakes?

This was the question posed by Toyota Motor Philippines (TMP) to college students nationwide. In the first-ever Toyota Young Marketeers Challenge, the Japanese automaker's local arm invited schools from across the country to send a team that could provide an answer.

Participants were given the task of coming up with an ad campaign that would help generate even better sales for the 2019 edition of the bestselling Toyota Vios. The catch: They had to present their ideas live to Toyota PH’s top executives, including the company’s president, Mr. Satoru Suzuki. 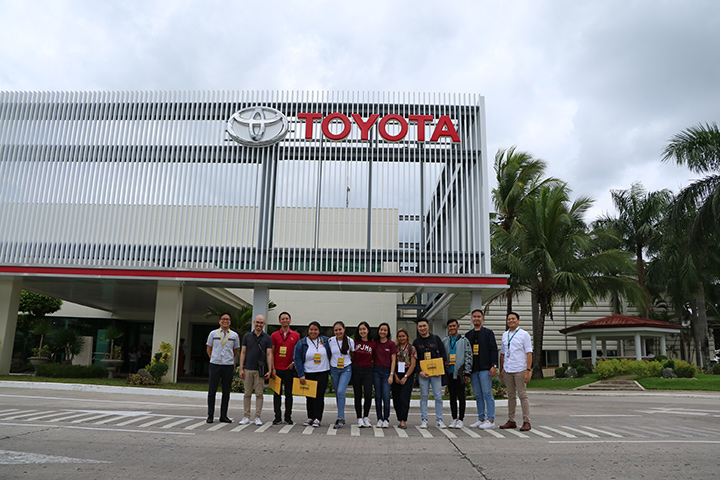 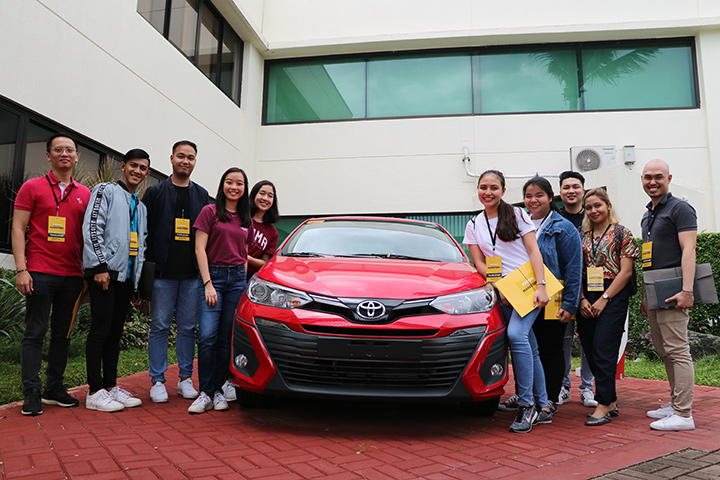 It took dozens of sleepless nights, several site visits to the Toyota plant in Laguna, workshops with the company’s partner marketing and advertising agencies, and one or two friendly quarrels. But eventually, 10 teams emerged as the competition’s finalists. 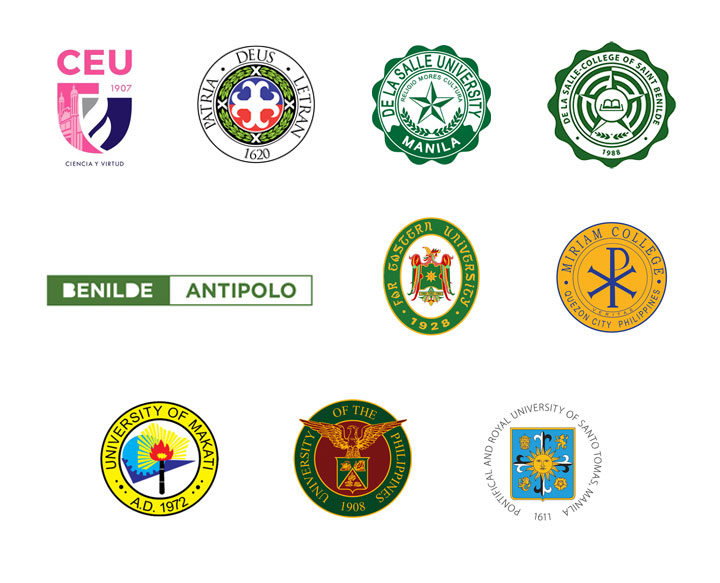 On October 8 at the Grand Hyatt Hotel in Bonifacio Global City, these 10 teams gathered for the final presentation. They represented the following schools: 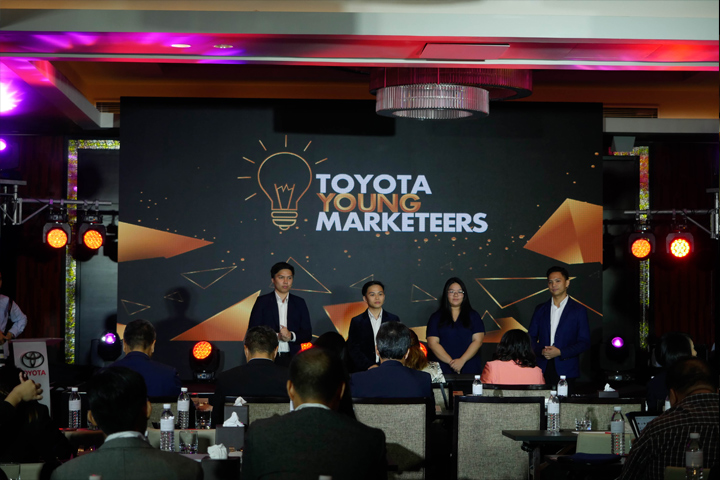 On that day, their presentations were masked with codenames from popular TMP branches, and then evaluated by an esteemed panel of judges: Ms. Elijah Marcial, TMP's Vice President for Marketing; Ms. Jaana Abrogena, President and CEO of digital agency DICE205; and Ms. Juno Sison, Senior Marketing Manager at SM Retail-Appliances. The pitches were graded both for the quality of their ideas and their uniqueness. By the end of the day, the three highest-scoring teams were awarded.

The team from DLS-CSB Antipolo came in third place. Chrisabel Salas, Mariele Felizardo, Mae Del Valle, and Kakoi Yambao developed a campaign that focused on the Vios’s longevity. For their efforts and ideas, the team took home iPad minis and a school grant of P50,000.

“We highlighted the Vios, not just as a car that will transport you from one place to another, but as a car for a lifetime. That's one of our biggest takeaways for our campaign,” Salas shared. 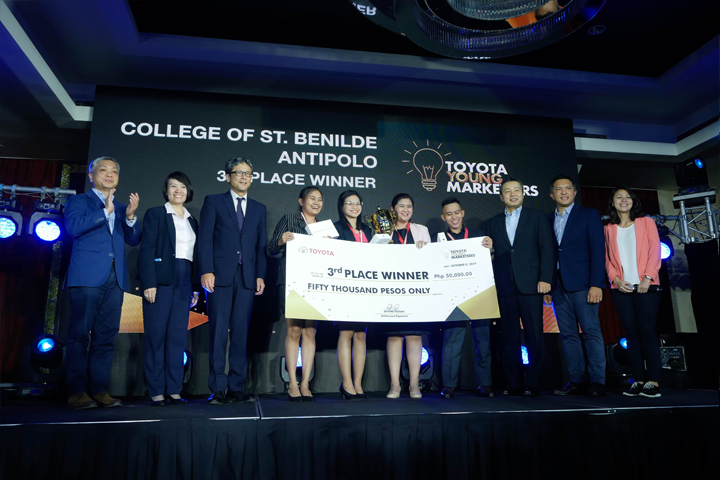 Second place went to the team of Christia Macandili, Jica De Luna, Alex Monasterial, and Sharlene Sia of De La Salle University Manila. Likewise, they were awarded iPads and a school grant of P100,000. Their campaign focused on all of the Vios’s features, tying everything together with the 2019 edition’s new look.

“There are a lot of value propositions, but the Toyota Vios 2019 looks good," said Macandili. "It looks better! It has a sportier look compared to before. I think that's why, honestly, I want to buy one myself." 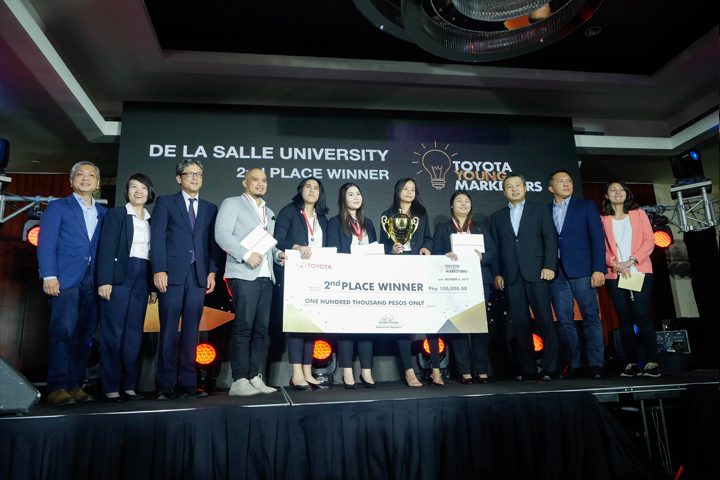 The grand prize for the first-ever Toyota Young Marketeers Challenge—MacBook Airs, a P250,000 school grant, and a free trip to Japan to see Toyota landmarks firsthand—went to the team from the University of the Philippines Diliman. Samantha Ching, Hanna Laurel, Nathan Oranga, and William Alonso won the judges over with a campaign that humanized the Toyota Vios—literally.

“One of the things we realized is that purchasing a car is not just all about the needs, or the functional things you want out of it, but more of the emotional satisfaction that you get,” Alonso explained. “The connection that you have with the car and where you want to be, just by having that car—there's a huge opportunity in trying to communicate that emotional benefit.”

With this in mind, the team transformed the Vios into “Vio,” a friendly racecar driver who helped people in their everyday lives. The character was developed from the data the students collected through heavy market research.

“We really saw that people found functional ads for cars very undifferentiated,” said Ching. "They're all very much alike, so we really wanted to stand out by proposing something new, that catered more to the emotional side of things.

It's really a skill that you won't learn unless you apply it somehow. This competition gave us an avenue to do that.”

“I think that's the core of marketing,” Laurel added. “You really have to drill it down to the specifics. Right now, marketing is starting to get very complex. People really want everything very tailor-fit and personal according to who you're talking to. I think that's the base of it. And that's something that we learned in Toyota.”

The team’s research involved a deep dive into previous ads, from Toyota and from other brands. The insights they got from this review proved invaluable.

“We realized that, in the industry right now, all the cars just talked about which car has better entertainment systems, which car has larger interior space, which car has the better colors,” Oranga pointed out. “But no one really talks about which car will help you actually try to achieve your dreams. There are cars that brag about style, but then after three years break down.”

“We wanted to show that the Vios trademark, the Vios brand, is something that you could really rely on,” he continued. “It's something that would help first-time car owners or drivers in their journey to succeed, or do whatever they want to do.”

But what was it about the Vios that made it such a reliable friend? To get the answer, the team consulted virtually every millennial they could find: siblings, siblings’ officemates, professors, and even a few helpful strangers. The answers they got boiled down to the car’s durability.

"The key features that we were able to identify—what people really loved about the Vios—is how durable and reliable it is; how, if something breaks down, it's really easy to find parts for the Vios,” Alonso elaborated. “One insight that we found is that for millennials, owning a car is really a hassle. They hate the idea of having to fix their car. Some of them would even rather just leave it on and not fix it because they don't want to go through the hassle of fixing it. They just want to go through their everyday lives and their goals.”

By positioning the Vios not as a set of features, but as a friend that helps you get what you want out of life, the UP students earned the top prize—and perhaps more importantly, the interest of a few executives.

Through this engagement, the student-participants were introduced to the Vios as an efficient, flexible, and reliable car. Many said it was the "smart choice," fully acknowledging that the nameplate is not just number one in sales, but in so many other ways as well. And while each group created their own marketing strategies, all student-participants were able to see the Vios as more than just a car—it's a conduit for their passions, and a vehicle for the pursuit of their dreams. 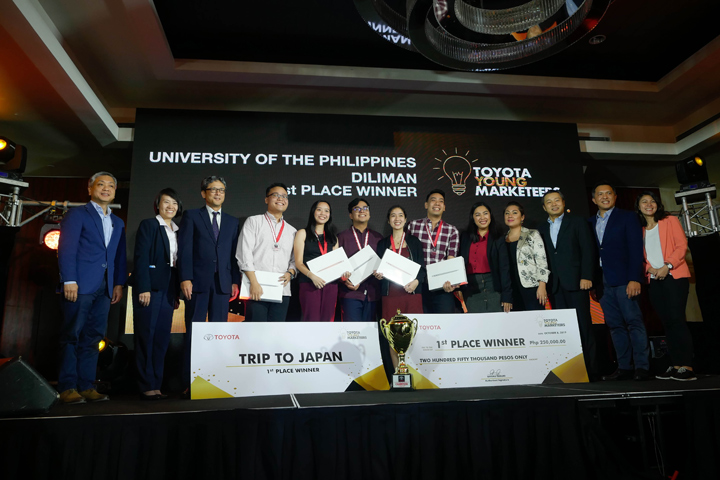 With the big win finally under their belts, Ching, Laurel, Oranga, and Alonso are all looking forward to getting some much-deserved rest. After that, it’s off to Japan for the four of them, on a trip and a learning experience to remember.

This article is created by Summit Storylabs in partnership with TOYOTA.
Shop the items in this story!
Read the Story →
Share:
Retake this Poll
Quiz Results
Share:
Take this Quiz Again
TGP Rating:
/20