Fight kidnapping: How to avoid getting abducted on the road 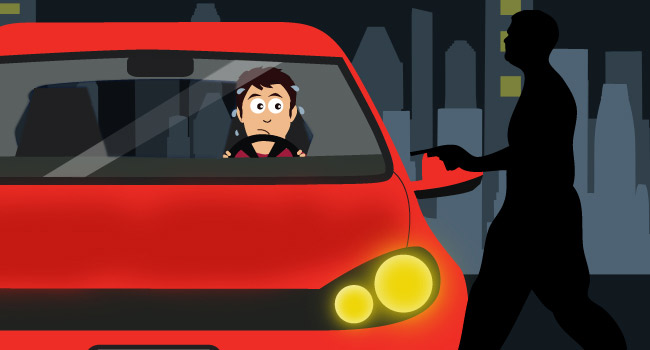 Early this week, a disturbing photo taken along EDSA circulated in Twittersphere. Showing armed men alighting from vehicles and pointing guns at a fenced-in SUV, the picture had been taken in broad daylight--the screenshot showed 2:46pm as the time stamp.

Was it an entrapment operation, a road-rage incident, a kidnap-for-ransom case or just another brazen criminal act? Whatever it was, the photo seemed to have done more harm than good.

She stressed the negative impact of spreading unverified rumors about kidnap-for-ransom cases. MRPO's founding chairperson asked everyone at the forum--including and especially the media--to stop spreading unconfirmed reports.

"Imagine if you keep texting people the wrong information, and then the correct information surfaces, the officials can't make a move because they are still verifying the intelligence gathered," she said.

So let's stop speculating, shall we? Rather, let's arm ourselves with knowledge on what to do to ensure our security and to make sure criminals end up in jail so their diabolical plans won't get carried out.

Thanks to MRPO, a group of Tsinoy and Filipino kidnap-for-ransom victims, and its supporters, we can share valuable tips for preventing kidnapping instead of spreading unverified reports.

Below are the motoring-related anti-kidnapping tips we gathered from the forum:

* Understand how kidnap victims are selected. Just because you don't drive a luxury car doesn't mean kidnappers are not out to get you. According to MRPO's fact sheet, these lawless groups target four preys:

(1) Random or direct snatch victims (who can be found at ATMs and gasoline stations);

(2) Entrapment victims (who can be kidnapped after close surveillance, or with the criminals disguising as police officers);

(3) Kidnap victims seized through a tipster (informants are usually close to the victim, like household employees such as nannies and drivers, family friends or close relatives); and

(4) Victims with fixed routine and accessible information (like people who conduct business or real-estate transactions, or own and drive luxury cars).

* Keep your vehicle in tip-top shape. This way, your car won't easily conk out when you try to outrun a suspicious vehicle. It would be a good idea to have enough fuel in the tank, too. Which brings us to...

* Fuel up in the daytime. Some say buying cold gasoline will get you more fuel for every peso. But predators take advantage of the dark to inconspicuously get to their prey. Consequently, we should take note of the next two tips.

* Do not change a flat tire at an unsafe place. Change your flat rubber on a well-lit and well-traveled street. Avoid changing it in an isolated area, especially at night. "Run the tire flat and replace it, rather than change it in a risky place," technical editor Ferman Lao advises. "Most tire changes can be done in five minutes or less. If it's a slow leak, just inflate it."

* Keep the lights on outside your household's gate. In the name of safety, you would want more light and visibility outside your home at night. Remember the slain Kristelle Davantes? She was abducted after she got out of her car to open the gate upon reaching her house.

(Read: Protect yourself from criminals who might be after your vehicle)

* Change your route once in a while when you drive to or from work. By doing this (plus varying the time of your departure), you don't give routine clues to evil minds who may be stalking you.

* Do not expose your valuables (smartphones, tablets, laptops, wallets, cameras and jewelry) inside your car. Keep them in bags and hide them from prying eyes.

* Avoid posting your whereabouts on social media in real time. A Facebook status that says "Going on a road trip to Baguio with my family aboard our new SUV," may elicit a lot of likes from your contacts, but kidnappers also like this free information because it makes their job easier by letting them know where to find and abduct you.

"Yang Facebook na yan, pahamak yan," remarked PNP chief Alan Purisima at the forum. So be wise with your social media use. Share your road-trip photos when you get back home, not when you're still in the location. And blur your car's plate numbers when you post photos online.

* Do not park your vehicle in unattended lots. Leaving your car in such locations is like walking on poorly lit, isolated streets. Opt for guarded parking spaces where you and your car are safe.

* Do not submit to dubious-looking or illegitimate checkpoints. Be wary of disguised cops at supposed checkpoints. "The word 'checkpoint' must be emphasized, and the names of the police officers manning the checkpoint should be indicated," according to MRPO.

Purisima called for "community cooperation" and asked the public to report cops who pretend to be on duty when they shouldn't be. The PNP chief said these abusive cops will be "discharged immediately."

If and when you get abducted and you successfully escape or are released, contact your family immediately to let them know that you are safe. Lastly, make yourself available for investigation. MRPO, PNP and even DILG secretary Mar Roxas stressed that last tip. By cooperating with investigators, you equip the authorities with information to help them put a stop to kidnapping.

Be vigilant, be safe.

Son saddened when family's Miata was sold, so dad replaces it with this
View other articles about:
Recommended Videos
Read the Story →
This article originally appeared on Topgear.com. Minor edits have been made by the TopGear.com.ph editors.
Share:
Retake this Poll
Quiz Results
Share:
Take this Quiz Again
TGP Rating:
/20