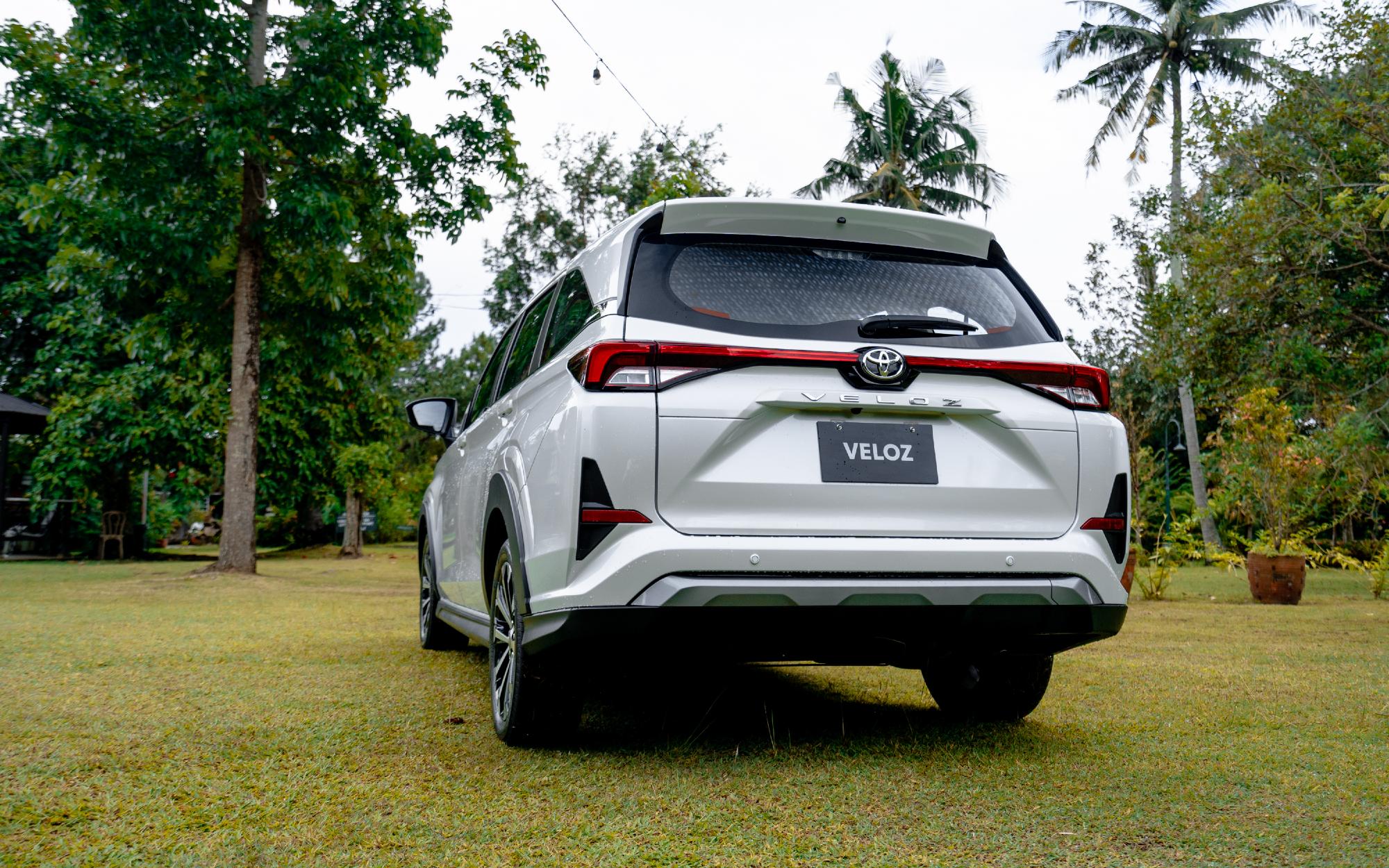 It’s April 2022 as I write this, which means election season in the country is at fever pitch. With just days to go until we elect our next set of leaders, campaign promises border on ludicrous as candidates attempt anything and everything to get our attention. Free housing? Sure. Transparency despite a history of corruption? You bet. Dance for your amusement? I solemnly swear on the 1987 Constitution, I’ll do it!

And one of the hottest topics during these temperamental times is the economy. Mainly, how to fix the damn thing. Experts say one of the keys to having a healthy economy is to have a strong middle class that serves as a strong consumer base for big businesses, is entrepreneurial, and reinvests its money back into the economy.

If there ever was a middle-class segment in the automotive world, then it would likely be the subcompact SUV/crossover/MPV/crosscoMPVdoohickey segment. Forget the product planning speak for a second. These vehicles offer some of the maneuverability of a sedan with the added space and seats of a midsize SUV. They’re marketed as offering the best of both worlds at a price point that’s affordable for many buyers. They can, in these economic times, keep a car brand’s sales charts healthy.

Toyota, the Philippines’ undisputed automotive ruler, has gone all in on growing its middleweights. In the COVID-19 time alone, we’ve seen the introduction of the Corolla Cross, the Raize, and the all-new Avanza. The latter is of particular interest here. You see, the previous-gen Avanza was sold in the Philippines for a whole decade, meaning it underwent more facelifts than your average K-pop superstar. One of the changes made to it was the introduction of a top-spec variant in 2017: the Avanza Veloz.

READ MORE:
The Toyota Supra is now available with a six-speed manual transmission
Auction finds: Is this old-school Toyota Hiace with just 490km on it worth P1.7-M?

Now, rather than retain the Veloz variant, Toyota Motor Philippines has instead opted to sell the name as a standalone model with two variants: one priced at P1,185,000, and a top-spec that retails for P1,225,000. We’re told that the Avanza will remain an MPV, while the Veloz is very much a subcompact SUV. This, despite their shared platform. 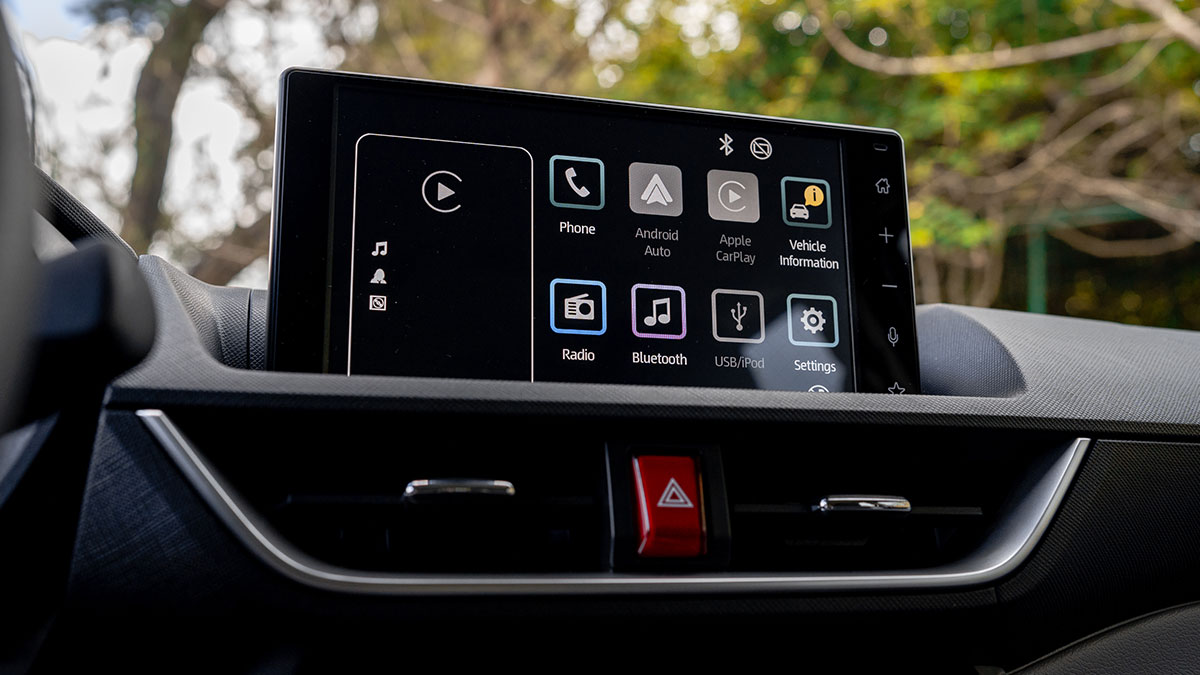 Again, never mind the semantics. The Veloz, like a politician, promises a more luxurious experience versus its rivals. On the outside, you get a massive honeycombe grille with a big Toyota badge in the middle. Next to them are a pair of sleek LED headlights. Capping off the front fascia are some black and gray plastic claddings underneath. Sharp lines and 17-inch alloy wheels make up the sides.

In the rear, a long taillight strip is broken up by another big badge with Veloz lettering underneath. In all, a mildly sportier package that disguises its utilitarian body.

The true luxuries, however, lie inside. Climb in, and you’re greeted by some well-bolstered fabric and leather seats. The driving position is a little too upright for a vehicle this size, but a few adjustments to the seat height and distance will sort you out. The steering wheel, to my surprise, gets both tilt and telescopic adjustment. There are some neat touches in the dash, like the old-school hazard button that makes a resounding clickety-clack noise with every push.

In the middle of the dash sits a sizeable nine-inch touchscreen display equipped with Android Auto and Apple CarPlay, a welcome addition at this price point. The latter works as well as it should, but the rest of the infotainment system lags with every swipe. Behind the wheel is a purely digital display that looks flashy but feels superfluous. Give me a dependable set of analog gauges any day.

Other generous niceties include Toyota Safety Sense, which here features lane departure warning, automatic high beam, and pre-collision system. The lane departure warning rings in your ear the minute your wheel steps out of line, so you know it’s got your best interests at heart. You also get a panoramic camera, making parking and maneuvering much simpler. 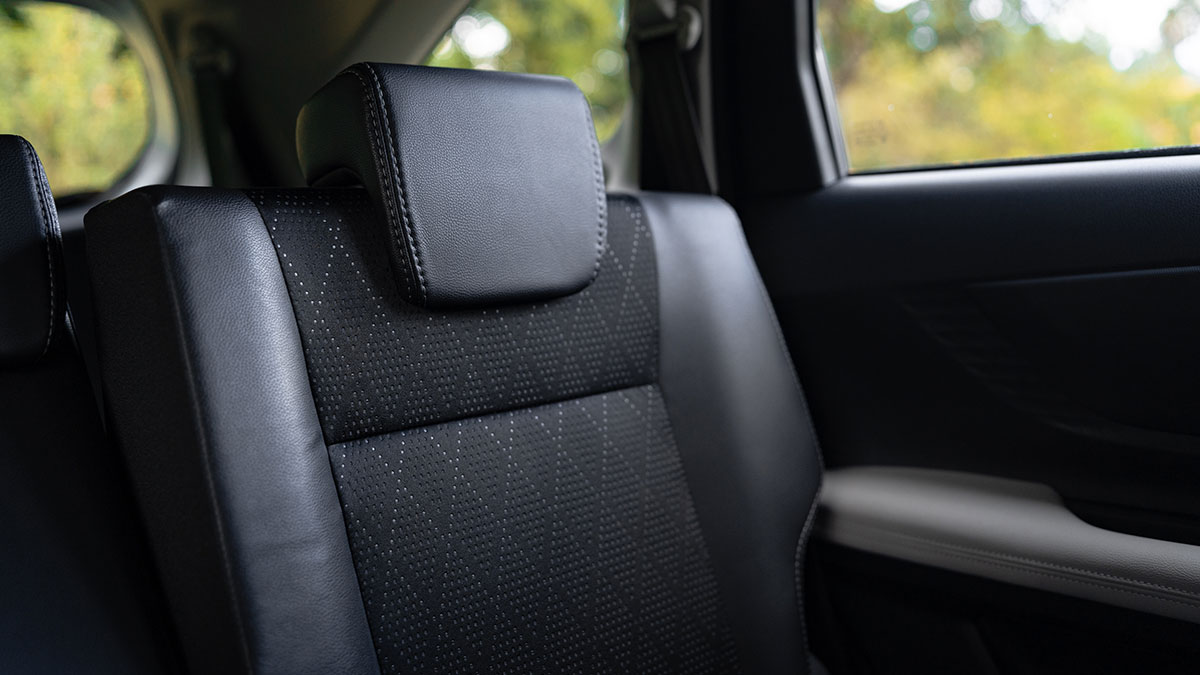 Being an Avanza twin, the Veloz has seats for seven, at least on paper. In the middle, fitting three average-sized Filipino males would be a tall task. In the rear, you get a surprising amount of room—enough to fit two of the aforementioned average-sized dudes with some degree of comfort. It helps that the middle seats are adjustable forwards and backwards.

At the heart of the Veloz is the same as what you’ll find in the Avanza—a 1.5-liter dual-VVT-i mill with 105hp and 138Nm of torque. In this case, it’s paired to a continuously variable transmission. This kind of setup is fairly typical for this segment and price bracket. For a five-seater, there’s a strong argument that it works. But in a seven-seater?

In this experiment, we stuffed four people and some camera gear in tow from Metro Manila to San Pablo in Laguna. Hitting highway speeds proves no issue—provided you’re in no hurry to reach them. Try and overtake with gusto, though, and you’re met with a hellacious screech north of 4,000rpm as the engine tries desperately to heed your demands. 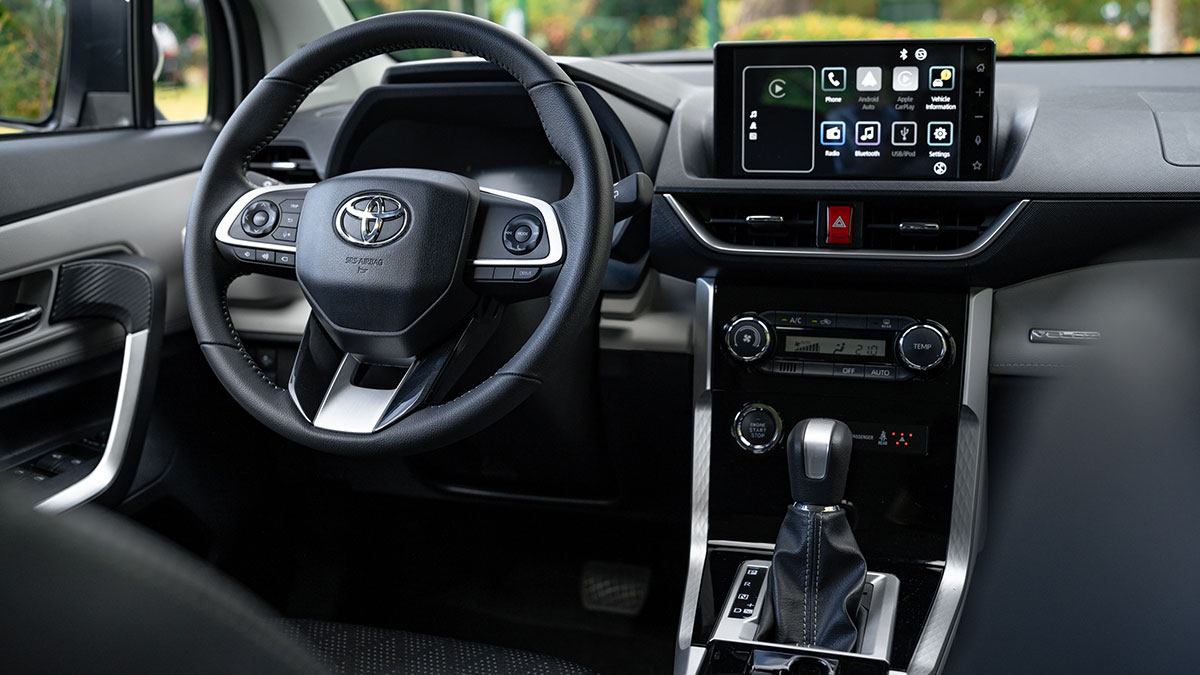 The few steep climbs we did make were met with the same anguished cry. One can only imagine how it would fare with a full family uphill from a dead start. Still, this is a car for the masses, and concessions like this are necessary to keep prices comfortable. The Avanza, for all its popularity, has always been plagued with the ‘underpowered’ label.

The good news is that you won’t find yourself getting uncomfortable even if the CVT takes its time delivering power to the front wheels. The ride comfort—courtesy of MacPherson Struts up front and a torsion beam in the rear—is a massive step up from the previous-gen Avanza. Pockmarked roads prove little trouble in this SUV. However, the advertised 190mm of  ground clearance proves much lower in reality. Chalk it up to the jutted front end and its plastic bits. 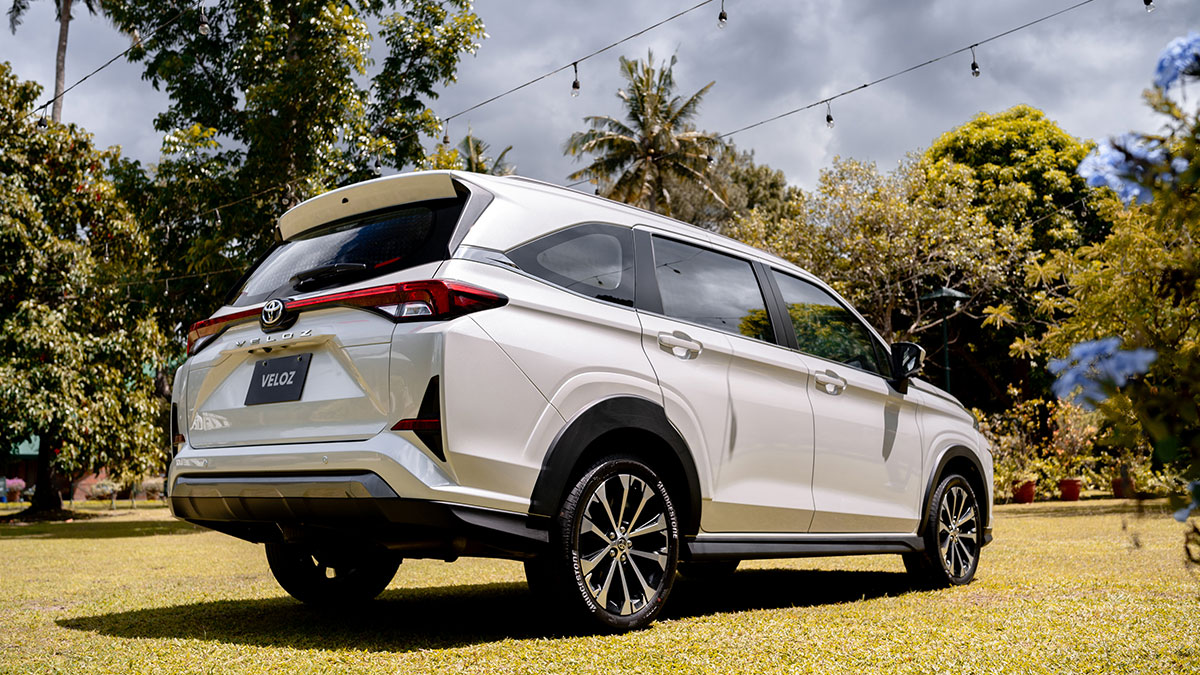 The steering wheel, meanwhile, moves at the slightest touch. Just one finger is enough to turn the feather-light tiller from end to end. A good thing to have in an urban setting, but the car guy in me yearns for a tad bit more steering feel to remind me I’m driving a living, breathing machine. Still, it’s an agile bit of kit with a generous turning radius, so you won’t have trouble squeezing it through the odd eskinita or two.

In any election, people either clamor for change or the continuation of the status quo. The all-new Veloz achieves both. It suffers from the same drawbacks that have long plagued the Avanza nameplate, but it improves on the formula in numerous ways to make it an attractive proposition in its own right. It’s the best candidate, they’ll tell you.

Whether it actually is or not may be beside the point. Any overlap it might have with its existing peers in the lineup only serves to benefit the majority Toyota party as a whole. All for one, and one for all. 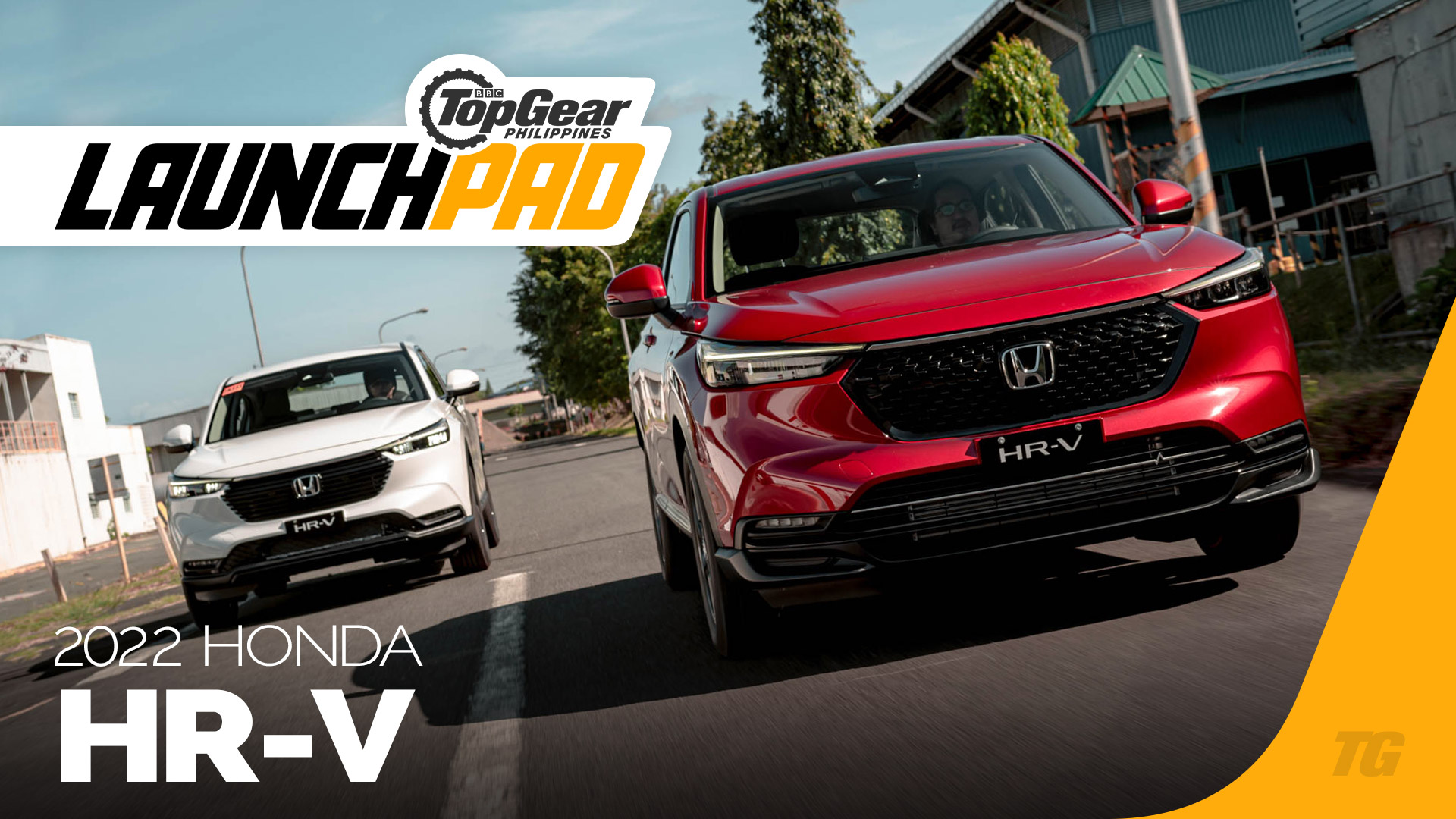 The 2022 Honda HR-V might be the subcompact crossover segment’s designated survivor
View other articles about:
Read the Story →
This article originally appeared on Topgear.com. Minor edits have been made by the TopGear.com.ph editors.
Share:
Retake this Poll
Quiz Results
Share:
Take this Quiz Again
TGP Rating:
/20