“The part of Osmeña Highway which passes through Manila, Makati, Pasay, and Taguig is toll-free”
by Aris Ilagan | Jul 24, 2019

Ride-hailing motorcycle company Angkas, different motorcycle organizations, and other stakeholders have joined forces in taking legal steps to stop the implementation of the sub-400cc motorcycle ban on Osmeña Highway, which has triggered confusion among motorists.

Although there were no apprehensions made by some Skyway Operations & Management Corporation (SOMCO) patrolmen stationed at the mouth of the small connector road under Sales Bridge, the ban is causing heavy traffic in the area. Out of confusion, motorcycle riders found themselves stopping at the busy intersection to ask tollway authorities why they are not allowed to use Osmeña Highway.

During the first day of implementation, traffic enforcers of the Metropolitan Manila Development Authority (MMDA) were seen assisting the Skyway patrolmen in diverting small-bike riders Pasong Tamo Extension, the alternative route for sub-400cc motorcycles as indicated in the billboards.

MMDA operations manager Bong Nebrija was quick to deny that his agency has anything to do with the ban, adding that MMDA traffic constables are not empowered to apprehend violators of the controversial policy. It turns out the MMDA has jurisdiction over Sales Bridge, where at least five placards bearing the advisory for the sub-400cc motorcycle ban were placed prior to the policy’s implementation.

At nighttime after rush hour, yours truly passes through Sales Bridge proceeding to East Service Road. Upon the implementation of the ban, we found that only MMDA traffic enforcers are left alone at the entry point of the small road connector at that time of day. Also, the blue boys were just watching small motorcycles entering the Osmeña Highway. 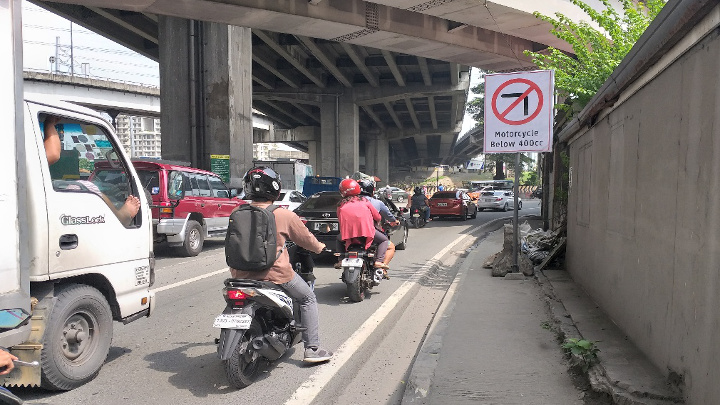 In a press conference held today, July 24, Angkas cited the existing Department Order (DO) No. 2007-38, which was issued by the Department of Transportation and Communications (DOTC) 19 years ago, in refuting the legality of the controversial policy. DO 2007-38 provides the rules and regulations governing the use of Limited Access Facilities (Expressways) by Motorcycles. Fomer Land Transportation Franchising and Regulatory Board (LTFRB) board member Ariel Inton, now an advocate of commuter safety, showed up at the media conference to support the riders' cause.

“The DOTC (now the Department of Transportation) orders that only motorcycles with an engine displacement of at least 400 cubic centimeters (cc) shall be allowed to operate within the limited access facilities and subject to certain conditions (i.e., compliance with RA 4136 or the Land Transportation and Traffic Code of the Philippines, particularly on roadworthiness, safety standards, and licensing requirements),” the group  said.

However, the group pointed out that expressways identified by DO 2007-38 as ‘Limited Access Facilities’ includes the following: 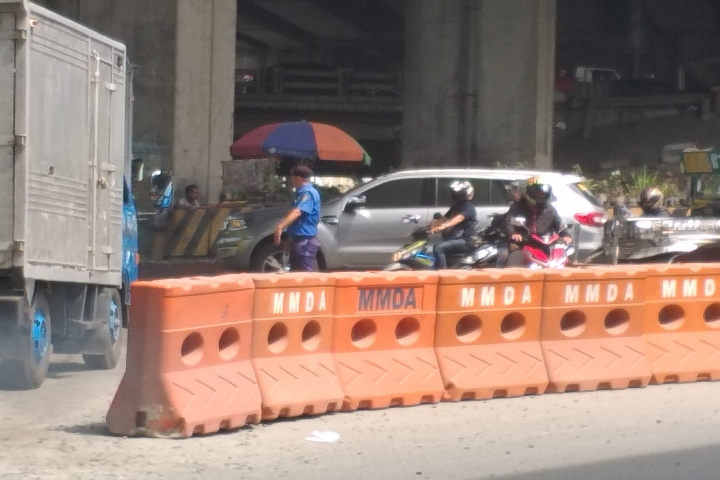 “The exclusive enumeration provided by the law shows that Osmeña Highway is not a Limited Access Facility,” the motorcycle groups emphasized.

According to the riders, Osmeña Highway starts from Quirino Avenue in Paco, Manila, and goes straight to Alabang, Muntinlupa. This major thoroughfare also covers the Buendia Flyover in Makati City.

“The part of Osmeña Highway which passes through Manila, Makati, Pasay, and Taguig is toll-free. Osmeña Highway only becomes a toll road past the Sales Interchange, which is then part of SLEX,” the motorcycle groups argued. “The area where the ban is being imposed was formerly a part of SLEX. This road section stretches from Sales Bridge in Pasay City to Quirino Avenue in Manila.”

With these, the motorcycle groups argued that the ban on sub-400cc bikes on Osmeña Highway is contrary to the provisions of DO 2007-38, and that the TRB has no power to impose its authority on this busy road stretch.

Royeca pointed directly to the SOMCO as being responsible for the drafting of the policy, adding that the company had only instructed the TRB to implement it. “Why is it that only Skyway O&M Corporation is giving the order?” he asked. “Can a private organization now dictate the use of public roads and facilities?”

The 2019 Royal Enfield Himalayan, now with ABS and EFI, starts at P299K
View other articles about:
Read the Story →
This article originally appeared on Topgear.com. Minor edits have been made by the TopGear.com.ph editors.
Share:
Retake this Poll
Quiz Results
Share:
Take this Quiz Again
TGP Rating:
/20