The winds of change are blowing in Romblon’s direction
by Aris Ilagan | Feb 18, 2019
MOTORCYCLE BRANDS IN THIS ARTICLE 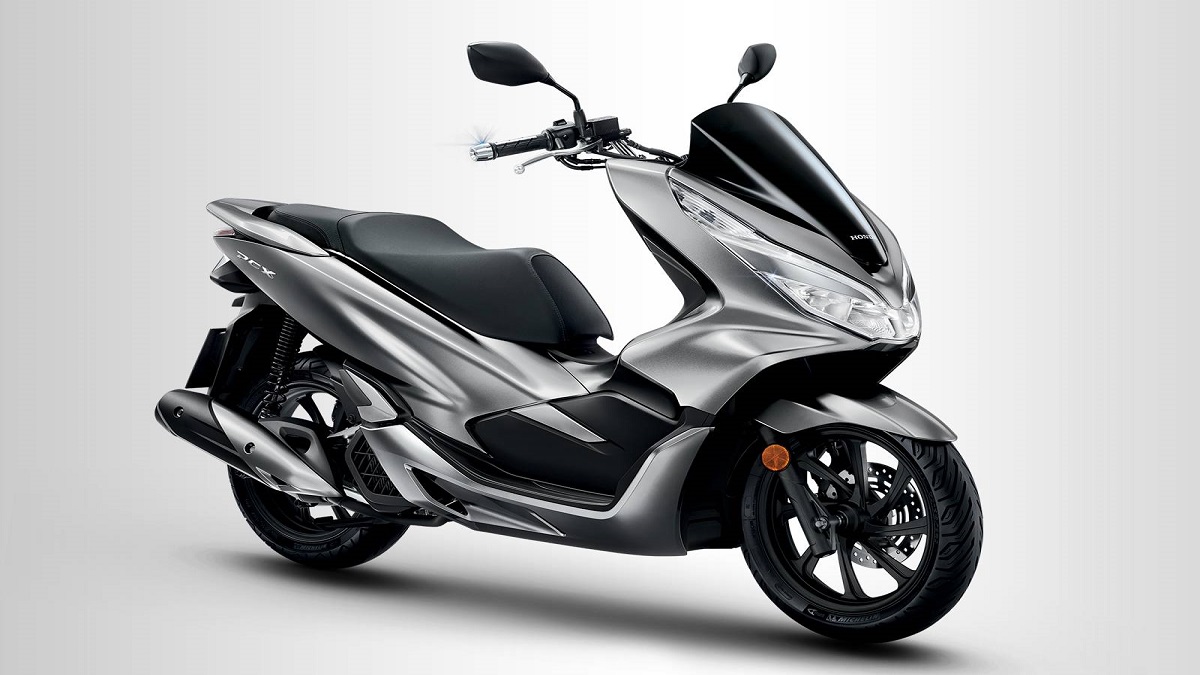 China-made electric scooters have invaded the streets of Metro Manila. Lured primarily by these two-wheelers’ affordable price, ease of use, and ability to weave through traffic, the owners probably don’t give a damn about emissions standards. Dealers of these bikes even engage in false advertising, saying e-scooters need not be registered and owners need not be license holders.

E-scooters, then, have struggled to gain recognition and respect among local road users. Electric vehicles, in general, have to hurdle issues regarding range, reliability, charging, and electricity supply.

But there’s hope on the horizon. As part of their long-term crusade to save the environment, Japanese companies Komaihaltec and Honda Motor Company have come to our shores and are now attempting to reverse the negative perception of e-scooters.

After thorough research, project proponents from both companies chose Romblon—a province known for its marble prodution and, in recent years, acute power shortages—as the best site for the ambitious undertaking. The two Japanese giants forged a partnership with the Romblon Electric Cooperative (Romelco), and Komaihaltec set up three horizontal-axis wind turbines that were then linked with Romblon’s three diesel power plants.

In the end, the Romblomanons got more than what they’d been praying for. With each turbine producing 300kW of power at speeds of 3-25m/sec, the entire Romblon province now enjoys a power surplus. So what will they do with the excess electricity?

This is where Honda came in. The Japanese corporation designed and built mobile power packs and 17 battery-charging stations called Exchangers. After they were network-linked to the diesel power plants and the wind turbines, the Exchangers were then positioned in different areas of the 42km Romblon road loop to supply electricity to 100 Honda PCX Electric scooters leased to residents. The locals’ response to the program has been overwhelmingly positive.

On February 10, 2019, we were accorded an exclusive test ride of the Honda PCX Electric scooter around Romblon. And here’s our take on this futuristic ride. 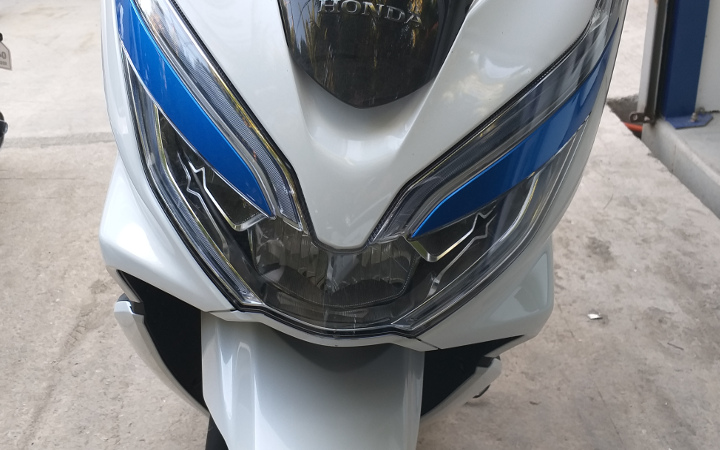 In terms of overall design and styling, the PCX Electric is very similar to the PCX 150 now being sold locally for P133,900. From the curvaceous body to the sleek headlamp, taillight, digital dash, and even the comfy seat, the Honda e-scooter is identical to its gasoline-fed sibling.

But as you look more closely, you will find out that the PCX Electric doesn’t have an exhaust system on the lower right side of the tail section, or an air-filter box on the left. A built-in motor temperature protection system replaces the radiator. Also, the PCX Electric sports the exclusive Pearl White color with sexy metallic blue accents, making it stand out among the thousands of motorbikes in Romblon. 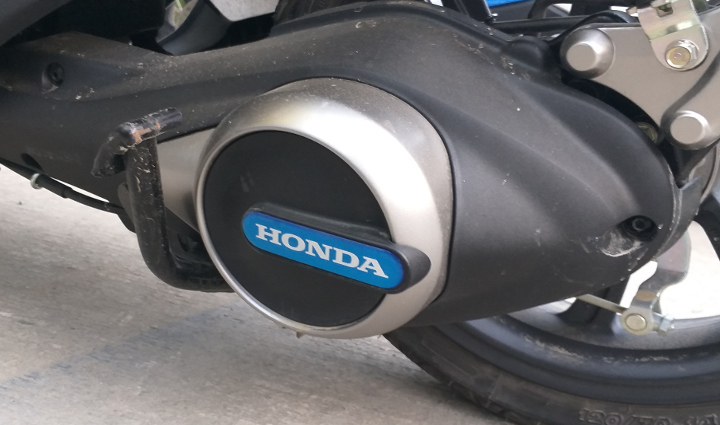 Except for about 2km of dirt stretches, Romblon is blessed with well-paved roads that provide the perfect habitat for the PCX Electric scooters. Who could have imagined that residents from a secluded province would be given an opportunity to have a classy ride for P2,000/month over a lease period of four years?

We witnessed how residents used their units heavily for their daily transport needs—bringing kids to school, running errands, or just taking a joyride at the beachfront. One of the drawbacks we could see was the limited space in the e-scooter’s underseat compartment, where the two portable power packs are stored.

To make way for these two batteries, the wheelbase has been slightly extended. Unlike the underseat compartment of the PCX 150 which can fit an open-face helmet, the PCX Electric’s tiny storage space can only accommodate small documents and a pair of sunglasses. 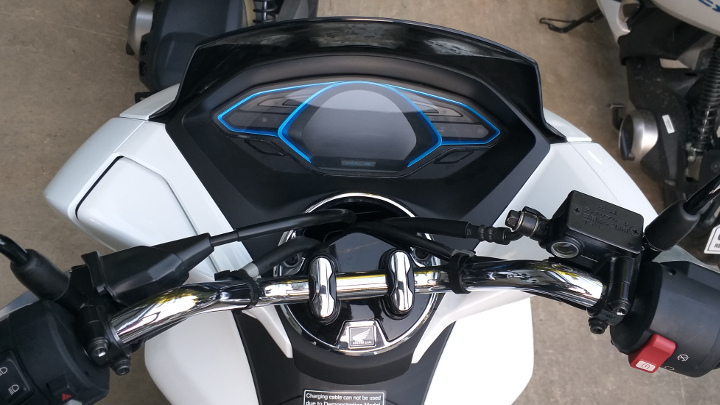 Unlike its gasoline-powered version, which has a four-stroke, liquid-cooled single-cylinder engine that generates 14.4hp, the PCX Electric runs on a newly developed 96V EV system using two serially connected 48V lithium-ion batteries with a maximum power rating of 5.7hp.

As expected, the throttle response of the PCX Electric is not punchy as the PCX 150’s. Rather, the former has smooth linear acceleration that makes it easier to control.

The two batteries, weighing around 10kg, were made by Panasonic, which also manufactures power packs for premium Tesla vehicles. Being electric-powered, the scooter is not only emissions-free but also vibration-free, thus reducing riding stress to a large extent. Also adding to the relaxing drive is the deafening silence of the compact electric motor. You’ll hardly notice that the motor is already on.

Versus the gasoline PCX that generates 13.3Nm, the e-scooter is more torquey with an additional 5Nm for attacking Romblon’s hillsides. Speaking of exciting maneuvers, you’ll be glad to know that the front antilock braking system has been retained in the PCX Electric. 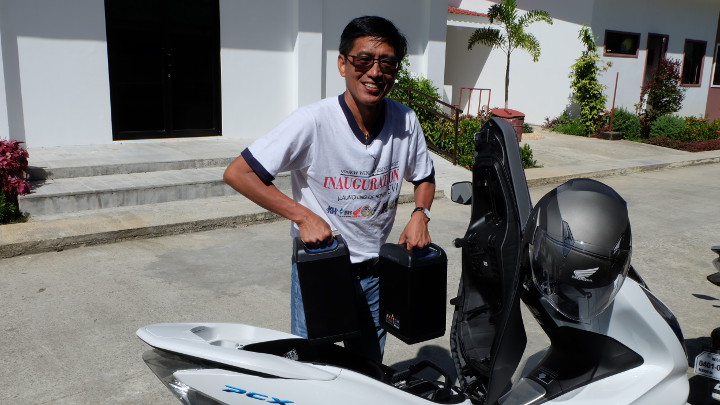 The PCX Electric embodies a relaxed riding position—a welcome feature when you’re targeting to complete the Romblon loop. With a raised handlebar, it is easy to maneuver on tight spots or making a slow U-turn.

Having maintained the suspension design of the PCX 150, the electric variant virtually floats over road bumps. The well-padded seat pampers the rider. The throttle control and the brake and clutch levers are light to operate. Pressing the brake levers with just one or two fingers is enough to put this awesome two-wheeler to a complete halt.

Without the exhaust system and the air-filter compartment, the PCX Electric is heavier than the PCX 150 by 13kg. Blame the two bulky batteries. Honda engineers, however, said this is one aspect they have yet to improve within the prescribed four-year demo period in Romblon. Aside from improving range and reducing weight, they’re targeting to reduce the battery size. 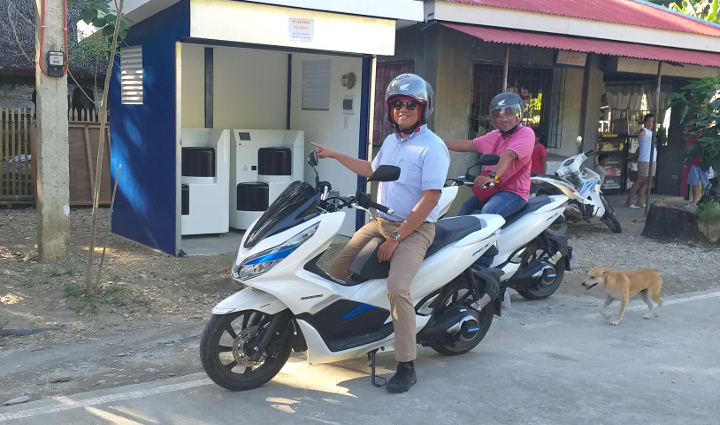 An average of four hours is needed to fully charge a mobile power pack. To minimize waiting time, Honda set up Exchanger stations where the rider can swap drained batteries for fully charged ones for a P35 charging fee. A pair of batteries has an average range of 42km when fully charged.

We checked the gasoline price the day we were in Romblon, and it was around P57/liter, or P5 more expensive than the average Metro Manila price. Also, one liter of gasoline for a PCX 150 would take a rider some 44km. You decide: P57 per full tank or P35 per full charge?

Swapping batteries takes less than a minute with the Exchangers, which look like vending machines. All the rider has to do is to stand before the Exchanger to allow the sensors to work and open the battery lids. After pulling out the fully-charged batteries from the charging station, he needs to put the drained units in the charging ports before the slots completely close. Meanwhile, putting the two fully-charged batteries in the scooter is just like loading softdrink bottles inside a box (pardon our age-betraying tito reference). It’s easy as ABC! 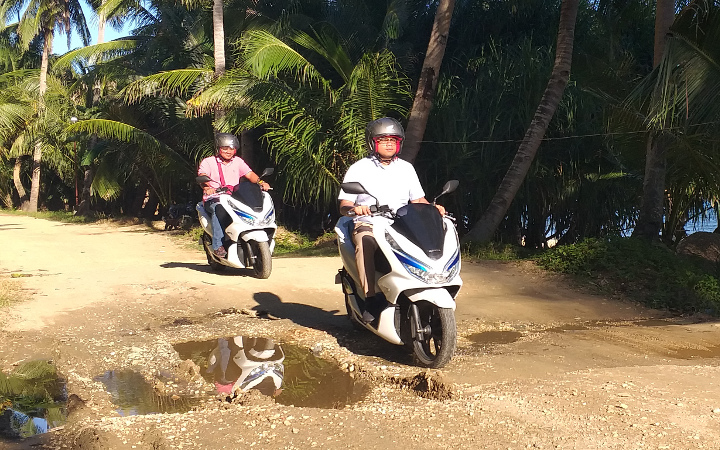 The future of mobility definitely starts in Romblon. Through Komaihaltec and Honda’s project, we can now say that this island municipality has ceased to be at the bottom of the food chain. It’s an awesome experience riding the Honda PCX Electric scooter—all duly registered with the regional Land Transportation Office office—knowing their valuable contribution to preserving the environment.

It’s also a welcome relief for Romblomanons to be blessed with new wind turbines that give them an uninterrupted supply of electricity. That’s hitting two birds with one stone. 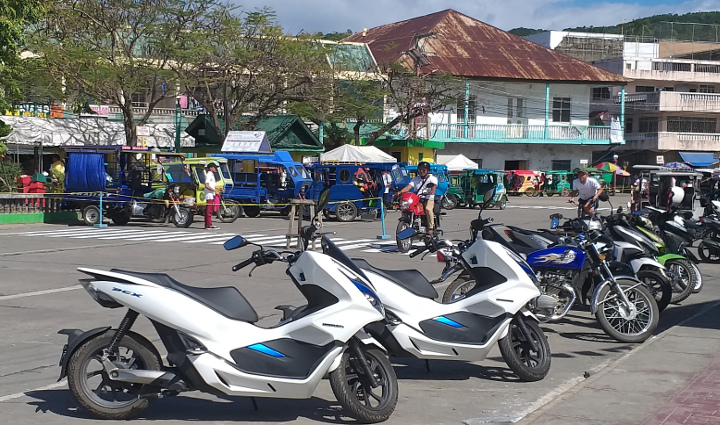 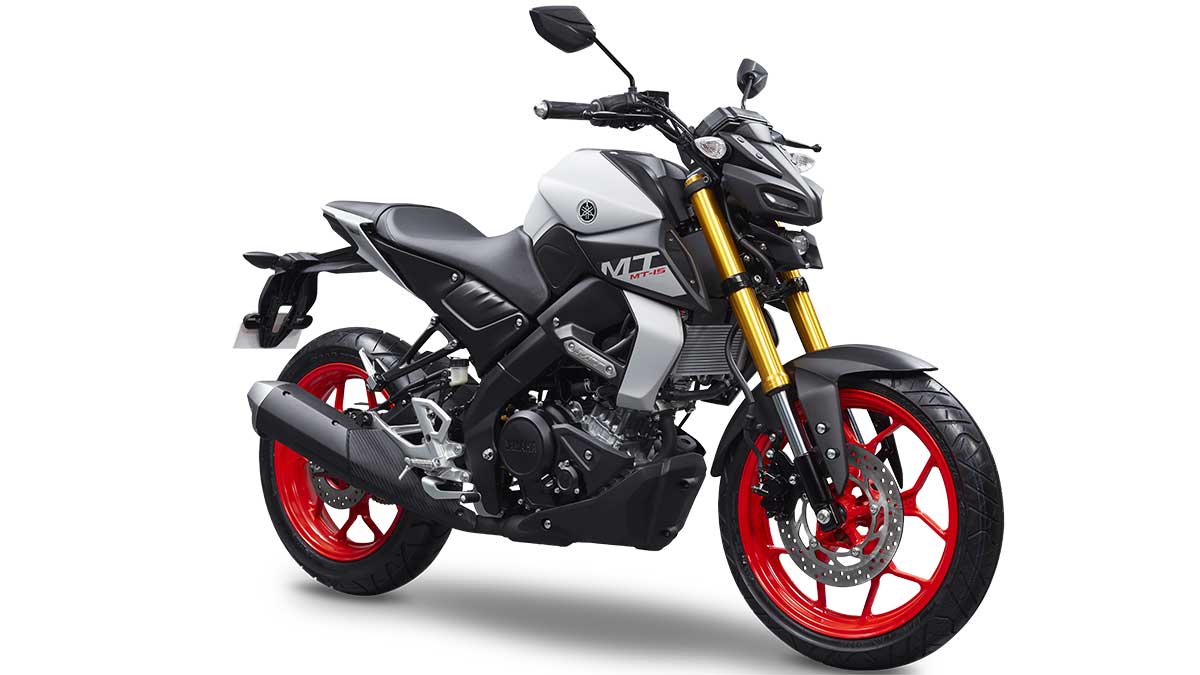 The new Yamaha MT-15 will go on sale in PH next month for P159,000
View other articles about:
Read the Story →
This article originally appeared on Topgear.com. Minor edits have been made by the TopGear.com.ph editors.
Share:
Retake this Poll
Quiz Results
Share:
Take this Quiz Again
TGP Rating:
/20