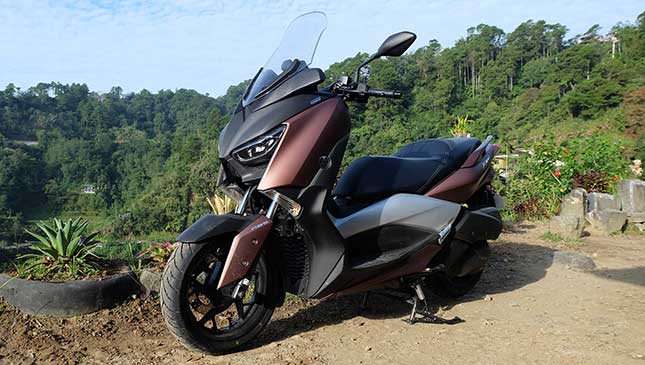 It’s a must for a rider to be physically and mentally fit before a long ride. Without constant alertness, quick reflexes and sharp eyesight, a rider is courting disaster.

Media riders who recently joined the Yamaha Tour de Rev event faced this challenge. An initiative of Yamaha Motor Philippines, the three-day event involved three grand activities: a group ride to the Banaue Rice Terraces in Ifugao and Sagada in Mountain Province; a party at the Inside Racing Soiree event in La Union; and lastly, awarding ceremonies for the Northern Luzon loop finishers at the YZone showroom in Mandaluyong City.

There’s one thing that allowed us to push our energy to the limit and take that 1,000km challenge despite having only a few hours of sleep: Each one was entrusted with a Yamaha XMax 300cc.

Here's how Yamaha’s latest family member enabled us to take that strenuous ride to the north and back. 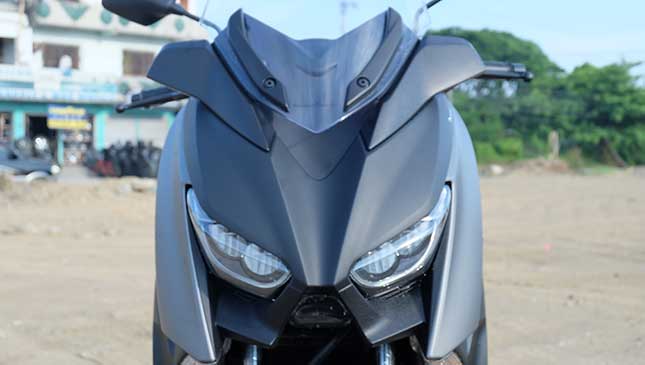 The XMax is the third member of Yamaha’s ‘Max’ family. The NMax (155cc) and TMax (530cc) were introduced to the Philippine market a few years back. Like its two siblings, the XMax is selling like hotcakes.

Big credit goes to the XMax’s smart styling that combined class and sportiness. The twin LED headlamps and tail lights (with daytime running lights) caught the attention of local residents along the route.

The XMax’s body design is about true aerodynamics, which is evident in different angles. From the choice of bolts and nuts to installation of plastic fairings, the XMax’s fit and finish also reflect the fine craftsmanship this Japanese brand is known for.

Initially, I had this little problem. If not for the emblems, distinguishing the XMax from its two siblings (the TMax and the NMax) can be a bit confusing at first. So pardon me for uttering NMax or TMax although I was really referring to the XMax.

Blessed with wide, long and well-cushioned seats, the XMax has a riding comfort that is unparalleled. It pampered its riders from Metro Manila's daily traffic mess to the flawless roads and endless twisties of Halsema Highway in the north.

With the XMax, there's plenty of seat space for the rider to move around, stretch a bit, and relax. There were some of us who had backrides and their passengers didn't look uncomfortable after long hours of riding.

Some were quick to liken the size of the XMax’s under seat compartment to an Olympic size swimming pool, being able to accommodate two full-face helmets or a backpack and a lot more stuff. It's probably the biggest in its class.

The power socket inside the left glove compartment was also highly appreciated. It kept our smart phones alive as we occassionally depended on Waze for directions.

One of the XMax’s unique features is its adjustable handlebars that can be moved closer by 20mm, depending on the rider’s preference. The 31.3-inch seat height of the XMax came as a big surprise because it's almost as tall as the Yamaha MT-09. 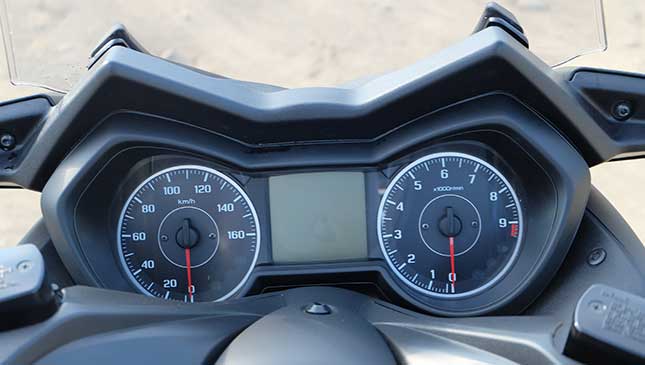 The steep uphill negotiations to Banaue and Sagada were no match to the powerful acceleration of the four-stroke, SOHC liquid-cooled powerplant of the XMax. On straights, squeezing the throttle to 130-135kph top speed is smooth and seamless. Even with a single-cylinder engine layout, the XMax surprisingly produces very minimal vibration. Less vibration equates to less riding stress.

The maximum power rating of the XMax is 28hp @ 7,250rpm. That’s 17hp less compared to the TMax. But this does not mean that the XMax is less fun to ride.

Sometimes less means more, because I find the XMax easier to tame and control. Its impressive engine response is credited to its Blue Core technology, which translates to more power and less fuel consumption. 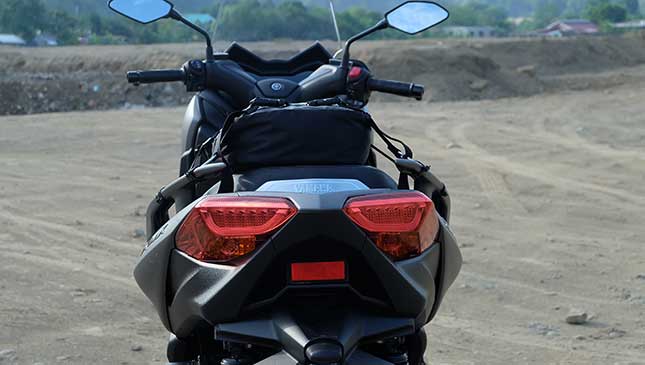 The XMax’s wheelbase is longer than the NMax’s by some 100mm, and shorter by 40mm than the TMax. The impressive cornering abilities of the 300cc variant falls somewhere between its two siblings.

When attacking tight corners at Bessang Pass from Baguio City enroute to La Union, the XMax proved to be more agile but with a bit of understeer when too much power is applied. The suspension provides a heavenly ride even on some unforgiving roads.

With stock exhaust, the engine noise is subdued in a low level. Nothing compares to listening to music via Spotify in Ifugao and Mountain Province.

However, by slightly closing the throttle, the XMax corrects itself with the help of traction control. The ABS on the front and rear discs also keeps the XMax in a straight line position before going to a complete halt after I abruptly apply the front brake. Otherwise, it possibly means my life versus that of a stray dog that suddenly crossed my path. 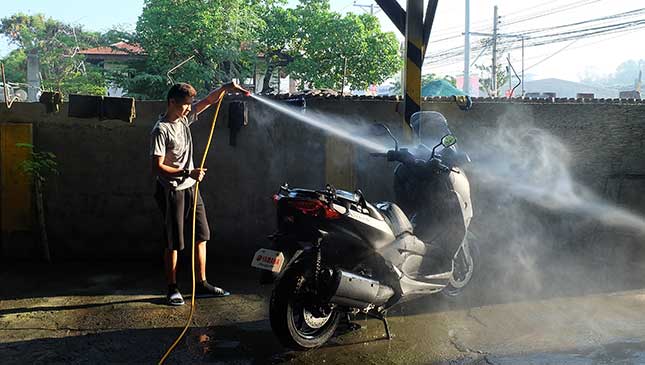 The battle for supremacy among scooters with big engines is starting to heat up. The discussion boils down to one issue: value for money. The more functional features, the better.

If you have this habit of forgetting where you parked your bike in a huge parking lot, the keyless ignition system helps the owner locate his XMax by just pressing a button in the smart key. 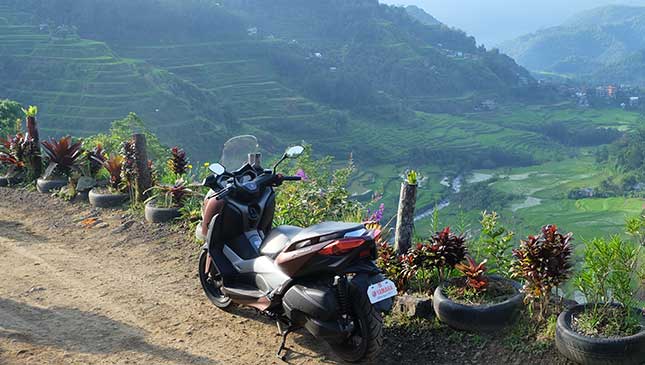 Guys, it cannot be denied that there’s an upswing in scooter sales in the country. And here comes the XMax, ready to pamper riders either in city traffic or in long out-of-town rides. Considering its awesome styling and bountiful extra features, the Yamaha XMax has undoubtedly set the bar high.

They say the middle child is usually the most assertive among the siblings to establish his or her own place in the family. Based on many reviews, the XMax has gotten more attention than expected. But despite all the hallelujiahs, the XMax has one major draw back: It’s not highway-legal.

Who knows? The toll authorities might soon ease the regulations. So keep your fingers crossed, just like the letter ‘X.’ 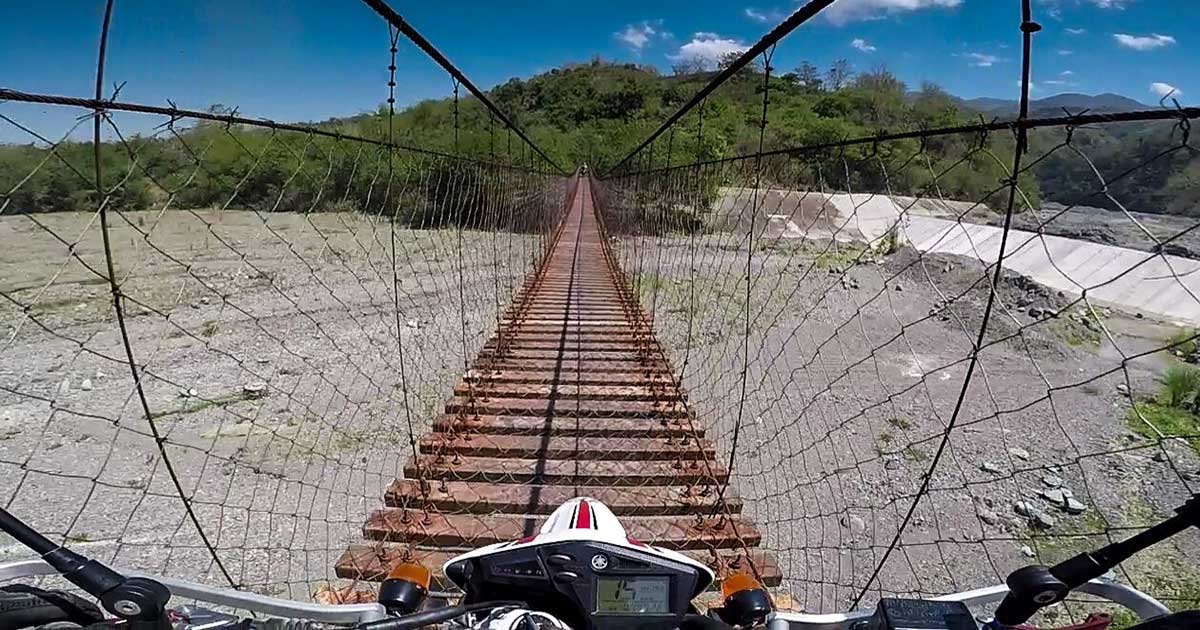 Off-road riding in Nueva Ecija is worth braving the heat for
View other articles about:
Read the Story →
This article originally appeared on Topgear.com. Minor edits have been made by the TopGear.com.ph editors.
Share:
Retake this Poll
Quiz Results
Share:
Take this Quiz Again
TGP Rating:
/20