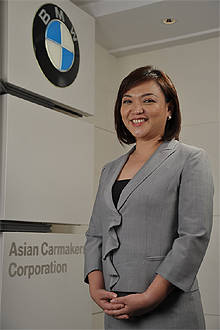 While the Philippine car industry is suffering from a slowdown, sales of BMW vehicles are on the rise due to strong core-product demand, Asian Carmakers Corporation (ACC) said.

ACC, the official importer and distributor of BMW vehicles in the Philippines, said the German brand even posted the highest growth in the premium-luxury-segment in September.

"BMW sales were up eight percent--far outpacing the growth of the premium segment and the Philippine auto industry," said Glen Dasig, BMW's executive director for sales and marketing.

BMW sold 561 units from January to September. Its sales were followed by Mercedes-Benz, Audi, Lexus and Volvo.

"At the core of BMW's growth is the strength of its products, which carries the momentum upon which BMW has ridden its success," said ACC president Maricar Parco.

BMW's X-Series is the best-selling lineup in the premium segment, while 7-Series and the 5-Series also lead in their respective vehicle categories.

"It's clear how we have maintained our position as the leading premium brand for nine consecutive years," Dasig said.

With strong sales in the last three quarters, ACC now expects BMW to end 2011 with a double-digit growth.

"Because of the Japan earthquake and the economic situation, people were really not that optimistic early this year. It was only in June and July that people started buying again," Dasig said. "It shows that there's confidence in the local economy and in the auto industry."

What's in store for BMW next year?

"We're going to have an explosive 2012," Dasig said. "Our products will carry our momentum forward. There are a lot of exciting things next year that will be defined by our new products."

That said, what would you like to see in BMW's Philippine showrooms in 2012? Type away and let ACC know your deepest and darkest Bimmer desires.

Click here to see the entire BMW lineup in the Philippines

Lotus gets into karting
View other articles about:
Recommended Videos
Read the Story →
This article originally appeared on Topgear.com. Minor edits have been made by the TopGear.com.ph editors.
Share:
Retake this Poll
Quiz Results
Share:
Take this Quiz Again
TGP Rating:
/20