Big 4 Japanese motorcycle brands to promote use of original parts

With a united event at the end of the month
Nov 20, 2012
CAR BRANDS IN THIS ARTICLE 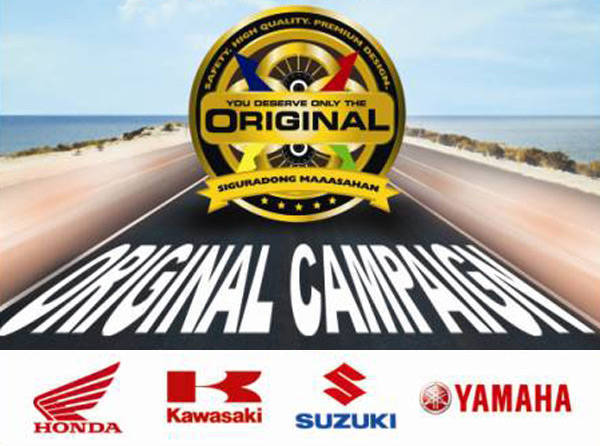 The "Big Four" motorcycle manufacturers--Honda Philippines, Kawasaki Motors Philippines, Suzuki Philippines and Yamaha Motor Philippines--are waging a war against the proliferation of fake or substandard motorcycle parts. On November 30, the four companies are setting aside their rivalry and uniting for a common cause in staging "The Original Campaign" at the Mall of Asia (beside the ice-skating rink). The event will start at 10am.

The event, according to a statement released to the press, is "an advocacy promoting the advantages of using motorcycles and parts designed from Japan. These advantages include safety, quality and availability."

Reading between the lines, the event is a campaign against the influx of China-made motorcycles and parts, although the Japanese motorcycle companies are careful not to explicitly say it in the press release.

"The motorcycle market in the Philippines is growing," points out the press statement. "More Filipinos prefer motorcycles as their means of transportation. Due to this, accidents involving motorcycles have also skyrocketed. Though the Big Four, with the help of the government, provide safety riding activities for their respective customers, facts will prove that this is not enough. A motorcycle rider's knowledge about safety riding won't be of any help if the motorcycle itself--or some of its parts--is substandard. Motorcycles and motorcycle parts designed by Honda, Kawasaki, Suzuki and Yamaha have passed various quality-control processes to be labeled safe and reliable."

So, if you own a motorcycle, you know where to go at the end of the month.

All-new Subaru Forester retains top-mounted intercooler after all
View other articles about:
Recommended Videos
Read the Story →
This article originally appeared on Topgear.com. Minor edits have been made by the TopGear.com.ph editors.
Share:
Retake this Poll
Quiz Results
Share:
Take this Quiz Again
TGP Rating:
/20