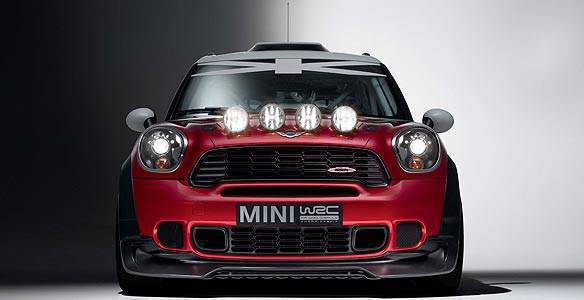 Either the Chief was busy ogling at the booth babes in the Paris Motor Show or he didn’t find it intriguing enough to make it into his Top 10 list. Whatever his reason, we think you’d still like to see the Countryman-based Mini WRC that debuted in France before it sees action in the 2011 World Rally Championship.

“The Paris Motor Show is the perfect stage, on which to launch our Mini WRC,” said Ian Robertson, member of BMW AG’s board of management for sales and marketing. “The response to our announcement that Mini will return to the world of rallying next year was very positive. The FIA (Fédération Internationale de l'Automobile) World Rally Championship is the pinnacle of rallying, making it the ideal platform for demonstrating the competitive spirit of our brand. The development of the car is running on schedule, and the preparations for the world championship are in full swing. The Mini Countryman production model provided the ideal basis for our new world championship challenger.”

Developed in partnership with Prodrive, the Mini Countryman’s chassis has been fitted with a roll cage that exceeds the strict safety requirements of the FIA. The WRC contender is powered by a BMW Motorsport-developed, 1.6-liter, inline-four Di turbocharged engine that’s mated to an Xtrac six-speed, sequential gearbox.

Prodrive also has plans to make Mini WRC customer cars available to independent teams to use in the racing series.

The Mini WRC will compete in six of the 13 scheduled rounds in the World Rally Championship next year before it competes in the entire 2012 season.