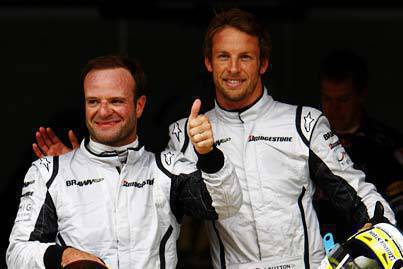 Jenson Button wrapped up his fourth win out of five races in yesterday's Spanish Grand Prix, but was it at the expense of teammate Rubens Barrichello?

A quick start from Barrichello saw him leapfrog Red Bull's Sebastian Vettel as well as pole sitter Button, letting him take the lead. Ferrari's Felipe Massa, meanwhile, made good use of his KERS system as he also overtook Vettel into the corner. However, WilliamsF1's Nico Rosberg accidentally tagged Toyota's Jarno Trulli, sending the Italian into the gravel trap before spinning back out onto the track and hitting Force India's Adrian Sutil in the process. Trying to avoid the collision, Toro Rosso's Sebastien Bourdais swerved only to collide with teammate Sebastien Buemi.

Once the safety car came in, Barrichello continuously put in one fast lap after another, slowly edging out his lead over Button. After the first two pit stop stops, however, it became clear that Brawn GP was using different strategies for Button and Barrichello, with the former's revised two-stopper game plan while the latter was still on a three-stopper.

From then on, pit stops decided on the battle for the lead between the Brawn GP drivers. Barrichello's last pit stop on Lap 51 saw him conceding the lead to Button, and the Brazilian had no choice but to accept a second place finish.

Despite a second 1-2 finish for Brawn GP, an undercurrent of discontent is said to be brewing within the team as Barrichello questioned the change of strategy that cost him the race.

Team principal Ross Brawn, who made the call to change Button's tactics, said Barrichello's performance towards the end of the race was a result of soft tires.

"Rubens was going extremely quickly at the front at that time and his three-stop strategy was clearly the quickest option for him. Unfortunately his tires did not perform well after his second stop which compromised his pace and ultimately cost him the race," Brawn said in a statement on the Formula One website.

Barrichello, however, is expecting a more definite answer from the team.

"This morning, we decided that three stops was the way to go. We came straight here (after the race) but after this evening we are going to have a meeting again and then we have some answers," Barrichello said at a press conference following the race.

It may be recalled that Barrichello also played second fiddle to Michael Schumacher on "team orders" when he was still with Ferrari. Could the ghost of "team orders" be haunting him?

Trailing the two Brawn GP cars was the hard charging Red Bull of Mark Webber, eager to pounce on a mistake from either driver to claim second place. But with an almost faultless drive from Brawn GP, Webber had to console himself with a third place finish.

On Lap 57 on Ferrari's pit wall, Massa's race engineer, Rob Smedley, was overheard on radio instructing him to save on fuel. Apparently, the Italian team's fuel delivery system came up one lap short of fuel for Massa - a most inopportune time since the Brazilian was constantly being challenged by Vettel. 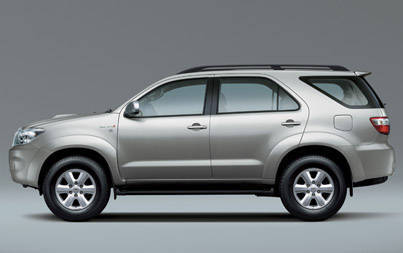 Toyota leads RP auto market
View other articles about:
Read the Story →
This article originally appeared on Topgear.com. Minor edits have been made by the TopGear.com.ph editors.
Share:
Retake this Poll
Quiz Results
Share:
Take this Quiz Again
TGP Rating:
/20