The lineup has Wranglers, Gladiators, and even a hybrid Grand Cherokee
by Greg Potts | Apr 11, 2022
CAR BRANDS IN THIS ARTICLE 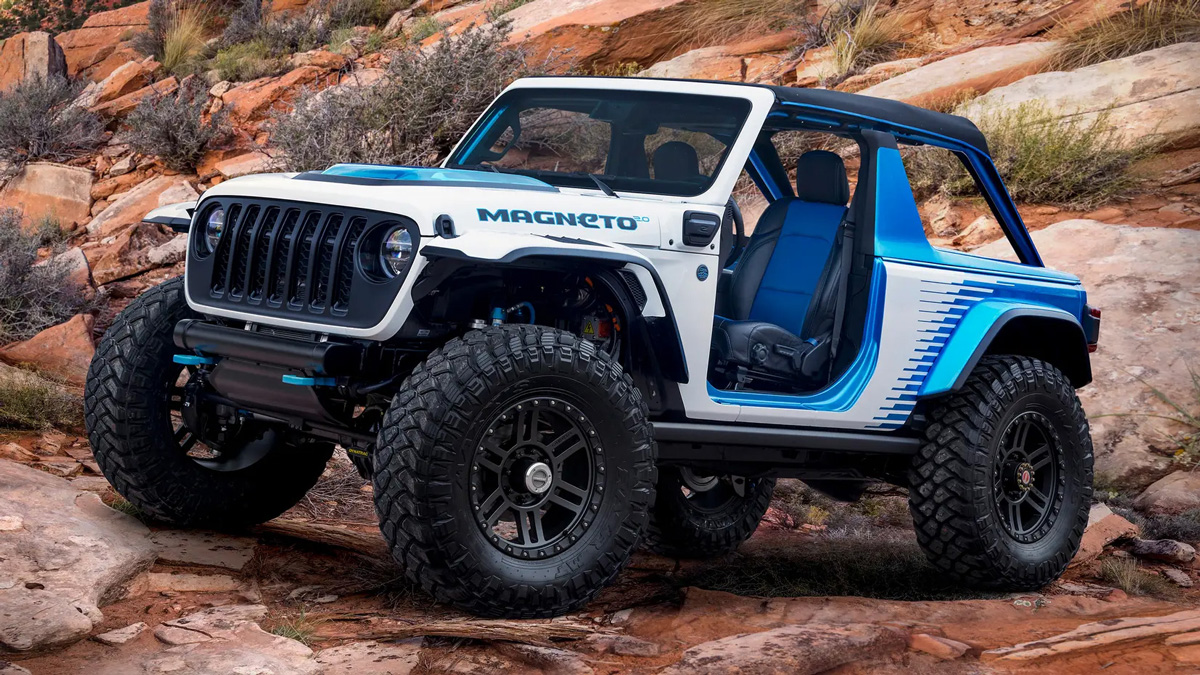 Last year Jeep showed off the Magneto in Moab. It was essentially a Wrangler that had been retrofitted with an electric powertrain, and now there’s a version 2.0.

It follows the same theme as the original concept, but this year Jeep has upped the power from 281hp to a mighty 616hp. There’s also more than triple the torque (1,151Nm) and Jeep reckons it’ll do 0-97kph in less than 3sec. 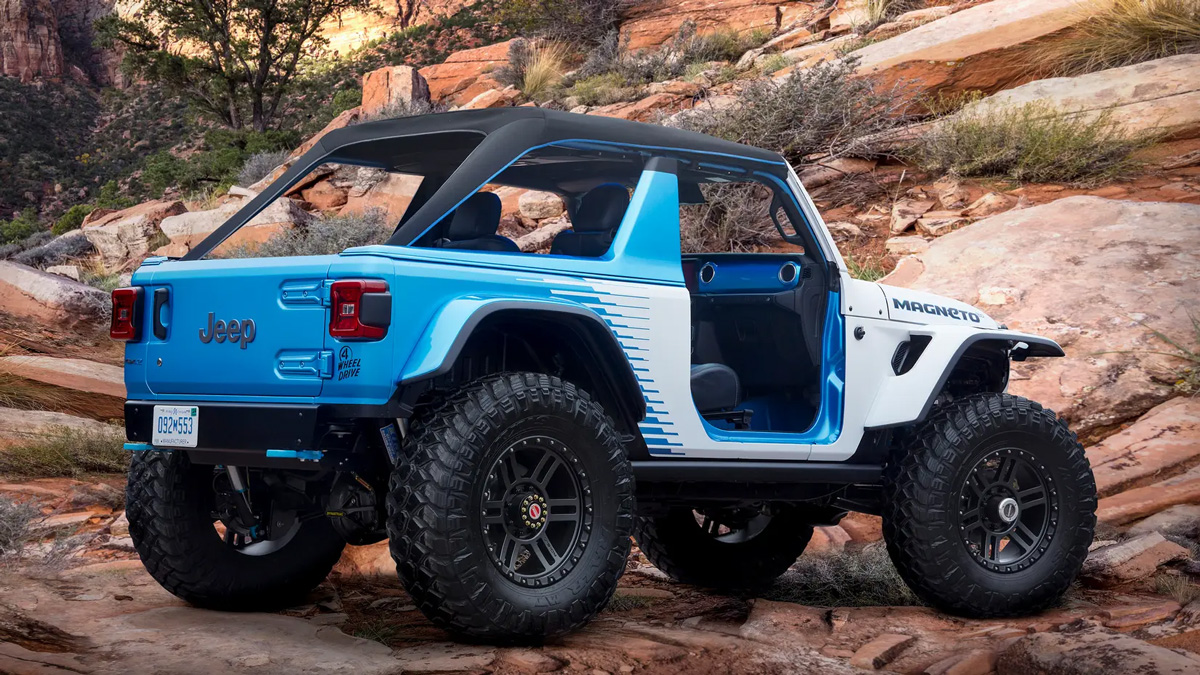 Interestingly, that power is still sent through the Wrangler’s six-speed manual gearbox. Chiefly because that allows Jeep to keep all of the fancy off-roading gubbins underneath, and it allows for greater control when rock crawling.

Apparently range wasn’t the goal when developing the Magneto, but this 2.0 does have four batteries placed around its person (with an extra 12 inches added to the wheelbase for a bit more room) which combine to offer 70kWh. Oh, and just so you know, the arches and the bonnet are all carbon fiber. Sporty. 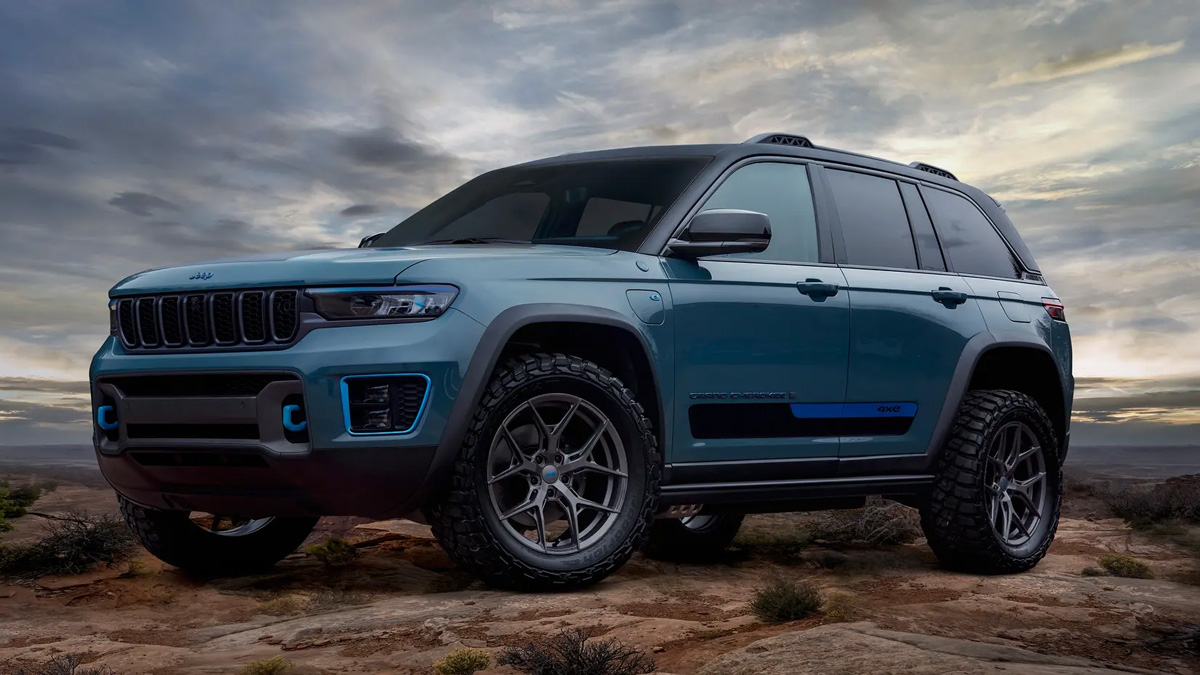 Jeep’s flagship Grand Cherokee will make its way to Europe at some point this year, and when it does it’ll only be available with the plug-in hybrid 4xe powertrain.

So, to celebrate the big PHEV, the second of Jeep’s Easter Safari concepts for 2022 is this Grand Cherokee Trailhawk Concept. You can actually order the GC in Trailhawk trim, and the standard car has conquered the notorious Rubicon Trail in full-electric mode. 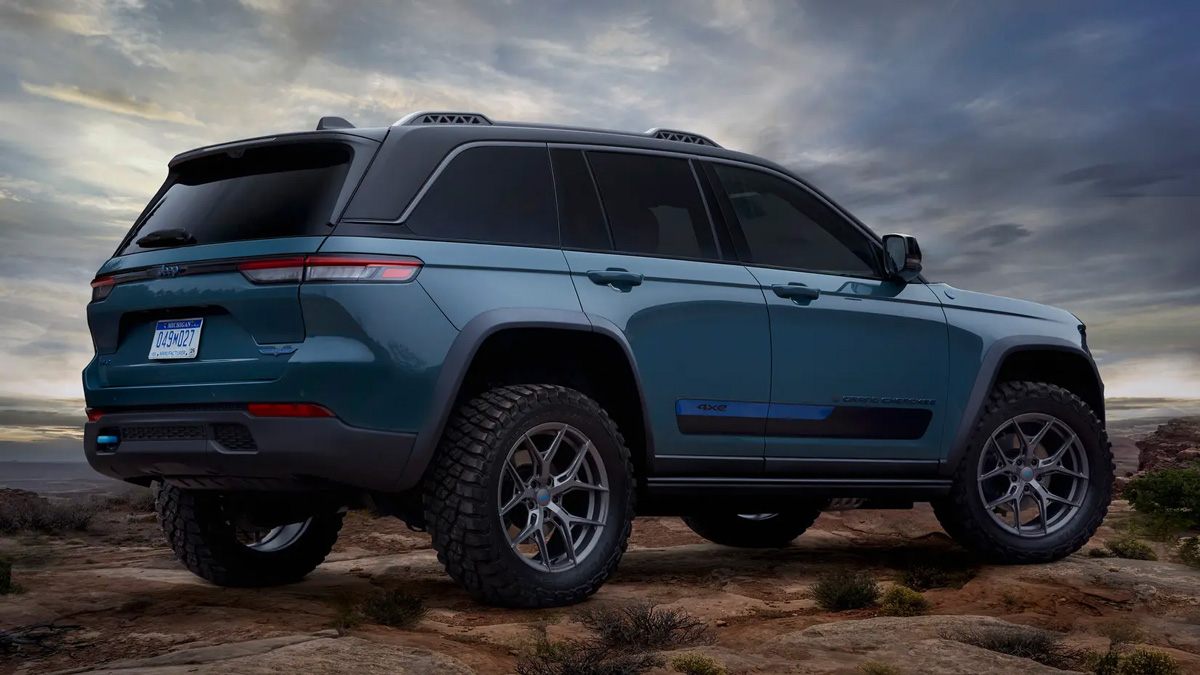 What you really want are the extra chunky bits from this concept though. Check out the custom 20-inch wheels, the 33-inch off-road tires, and the black roof that’s coated in a pickup truck bed liner for extra durability when you chuck a roof box, bikes, or kayaks on top. Full lifestyle baby.

ALSO READ:
Everything you need to get your LTO registration in order
Fines, payments, schedule: Your complete guide to the number coding scheme 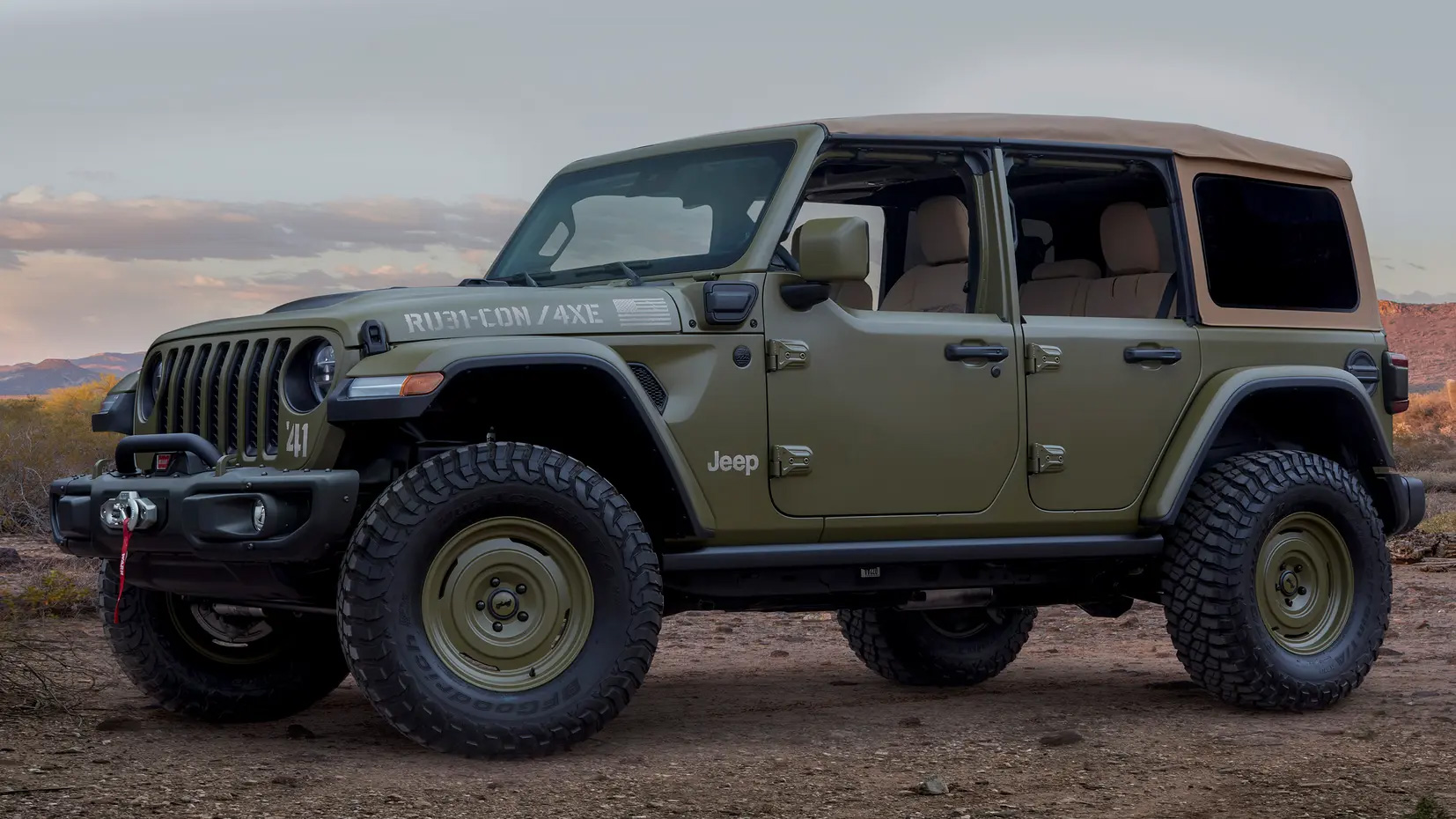 Can you guess what the ’41 concept was inspired by? Unless you've spontaneously lost all memory of the Jeep brand (weirdly specific but we won’t hold it against you), it takes inspiration from WW2’s Willys MB. Which began service in 1941. 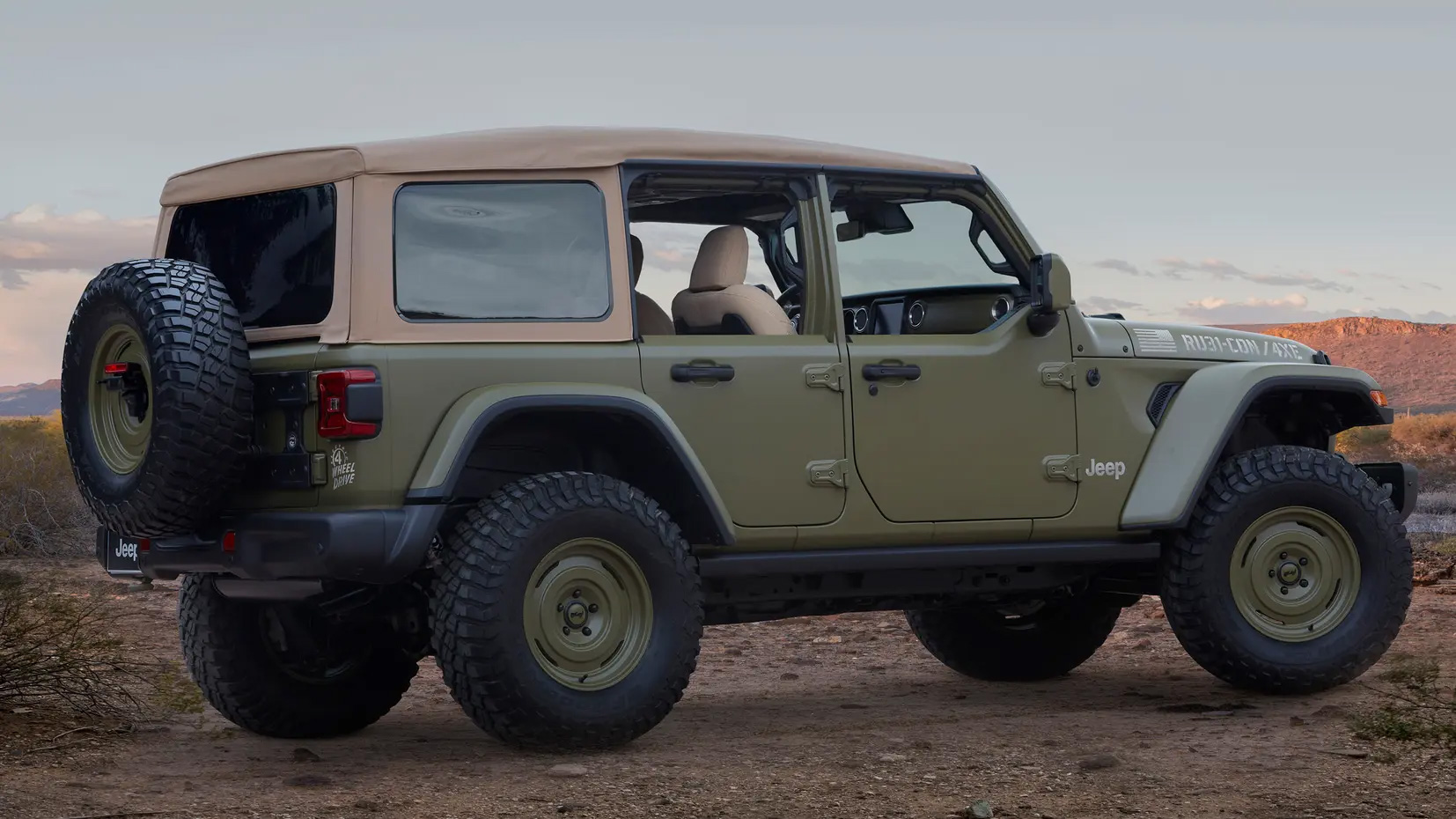 The ’41 is actually based on a plug-in hybrid Wrangler 4xe, but it gets matte green paint, black powder-coated steel bumpers, a Warn winch, and brilliant steel wheels. There’s also half-height doors and a khaki roof for the full military Jeep look. 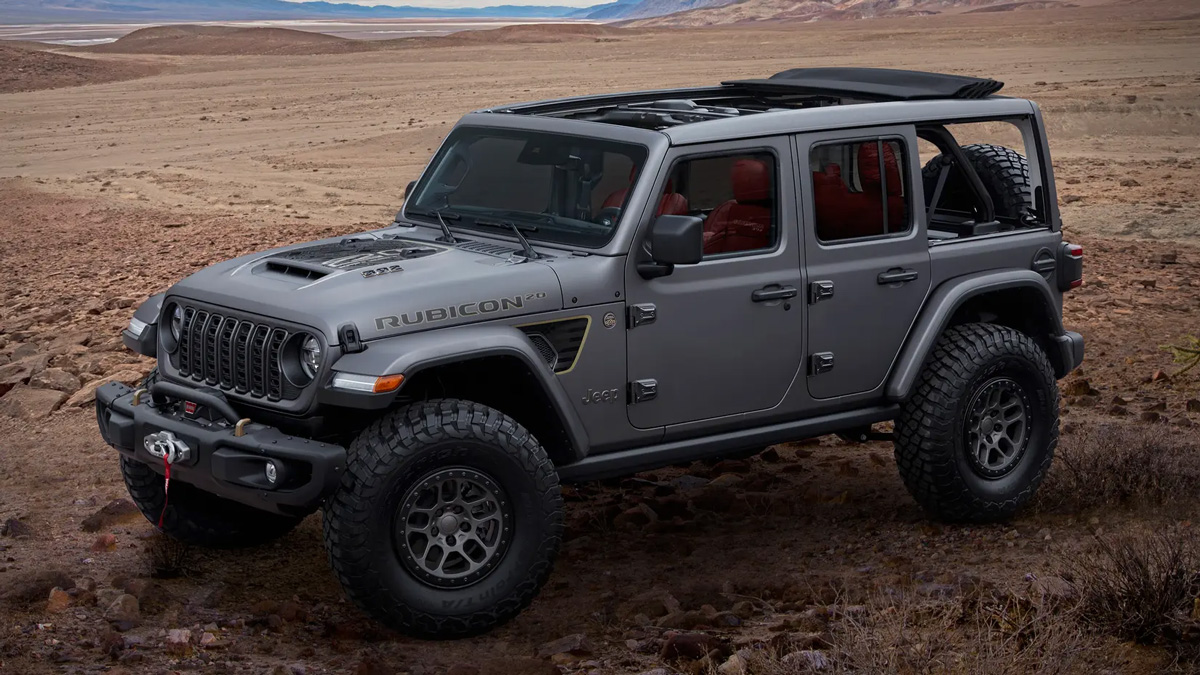 As you might have guessed from the name, it’s now a full two decades since Jeep launched a Rubicon-branded Wrangler. Named after the trail, that 2003 model year Wrangler was given Dana 44 axles, front and rear locking diffs, a disconnecting sway bar, rock rails, and big 31-inch off-road tires. 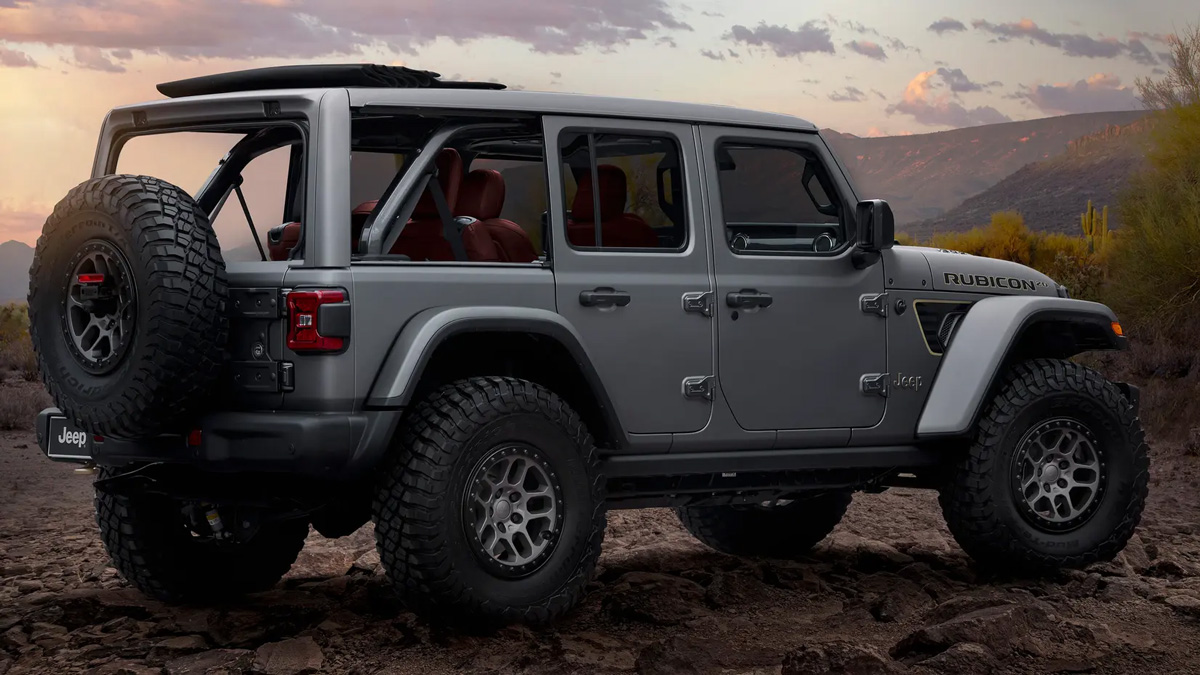 The 20th Anniversary Concept gets 37-inch tires, 17-inch Mopar wheels, a 2.0-inch lift kit, steel bumpers, rugged underbody protection, and the small matter of a 6.4-liter V8. Jeep has also fitted an active exhaust with two modes that it describes as ‘wild’ and ‘outrageous.’ 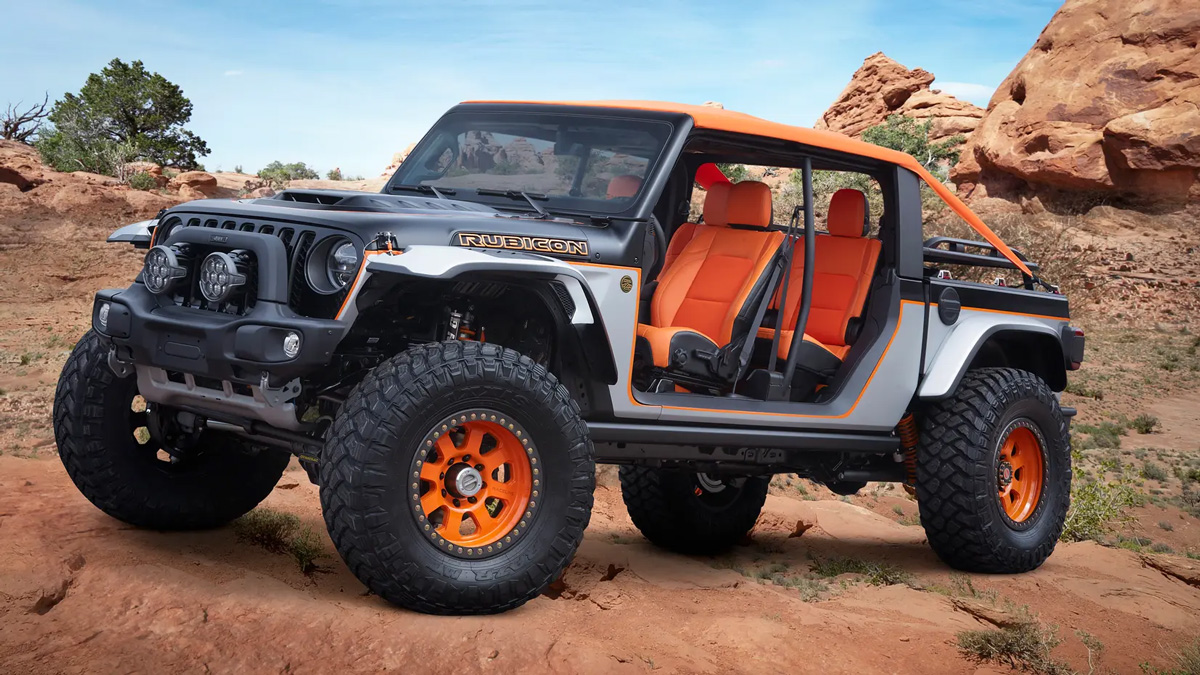 Great name for this one, isn’t it? The Bob supposedly blurs the line between the Wrangler and the pickup truck Gladiator, with the name coming from the fad of “bobbing” (i.e. chopping) the long rear overhangs off a pickup to improve its off-road ability. 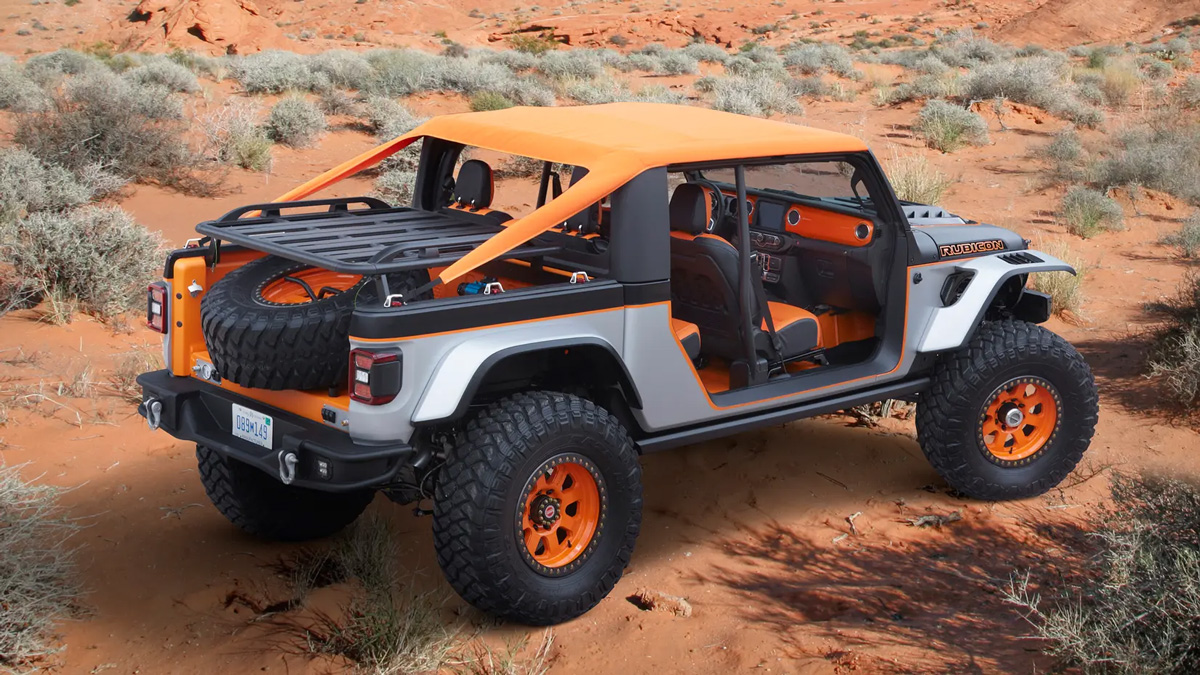 Based on a Gladiator Rubicon, Jeep has removed all the doors, the B-pillars, and the roof. It’s a full foot shorter than a standard Gladiator and there’s a custom canvas roof that looks a little like one of those fancy tents you might see at a glamping site. Under the bonnet is Jeep’s 3.0-liter V6 diesel engine and there are 40-inch tires and a 3.0-inch suspension lift to make it look properly rugged. 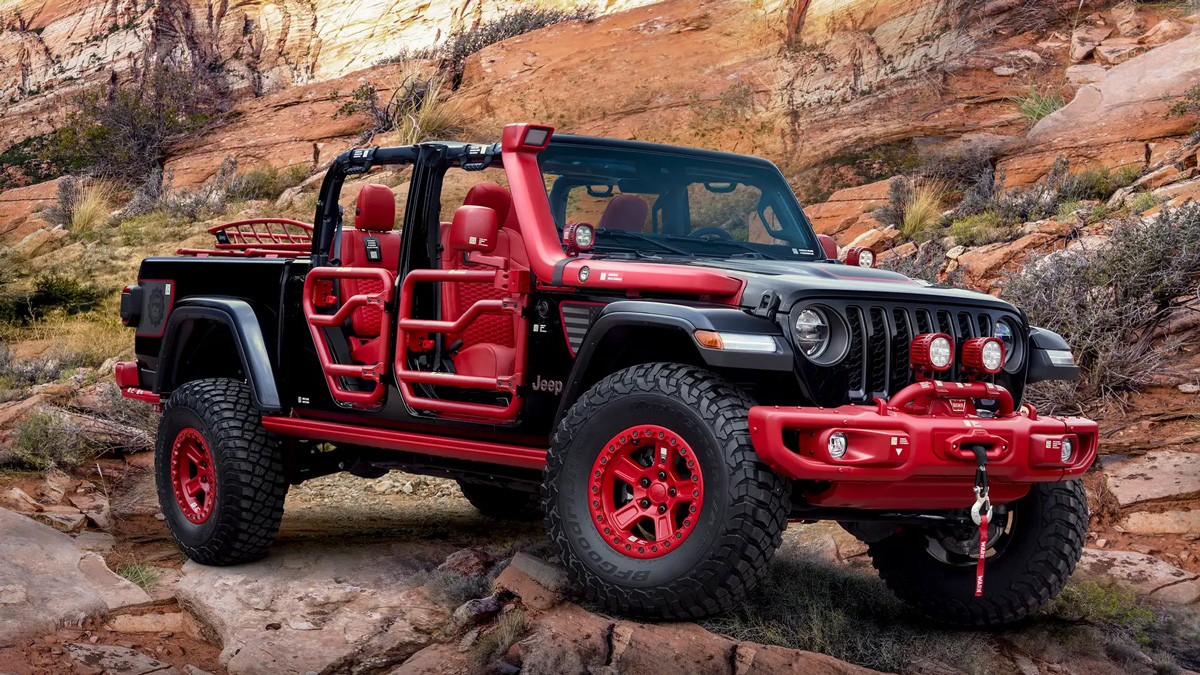 It might not look like it, but the D-Coder is actually rather cool indeed. Okay, the black and bright red paint job might not be the most fashionable look, but the concept deploys more than 35 JPP (Jeep Performance Parts by Mopar) accessories, with each one painted red and labeled with a QR code. 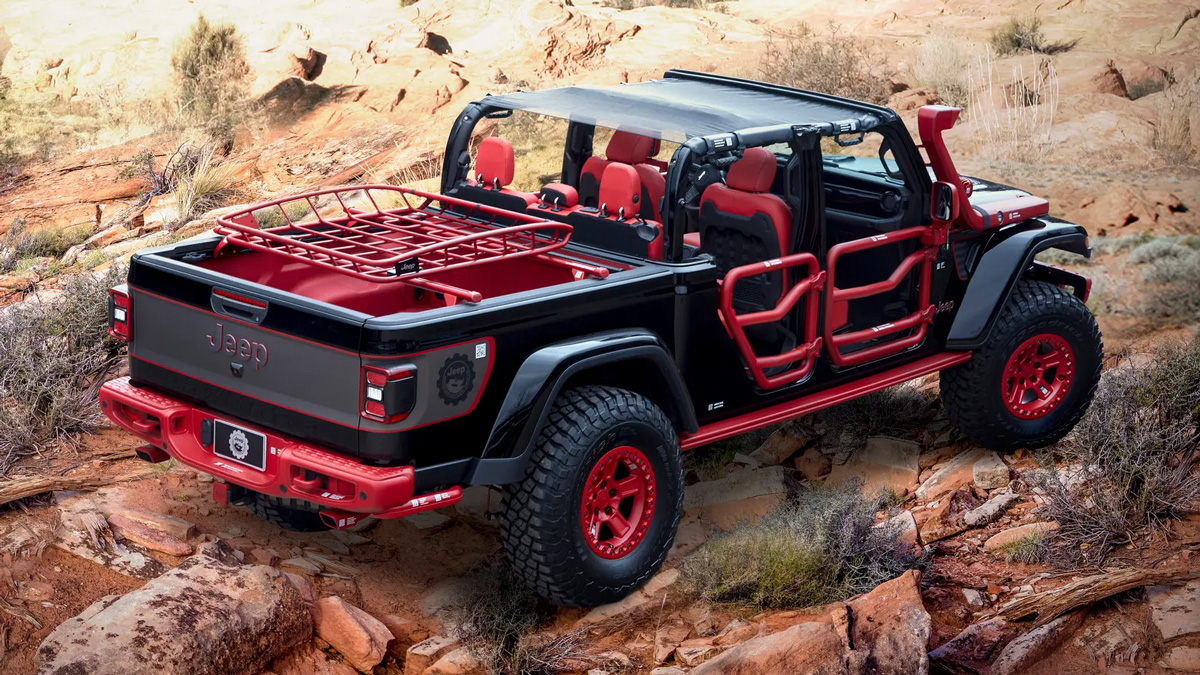 The QR codes apparently take you straight to the Mopar website where you can check out the part and even go on to buy it, so Jeep will be hoping the D-Coder gets plenty of attention in Moab. Not exactly your usual options list, is it? 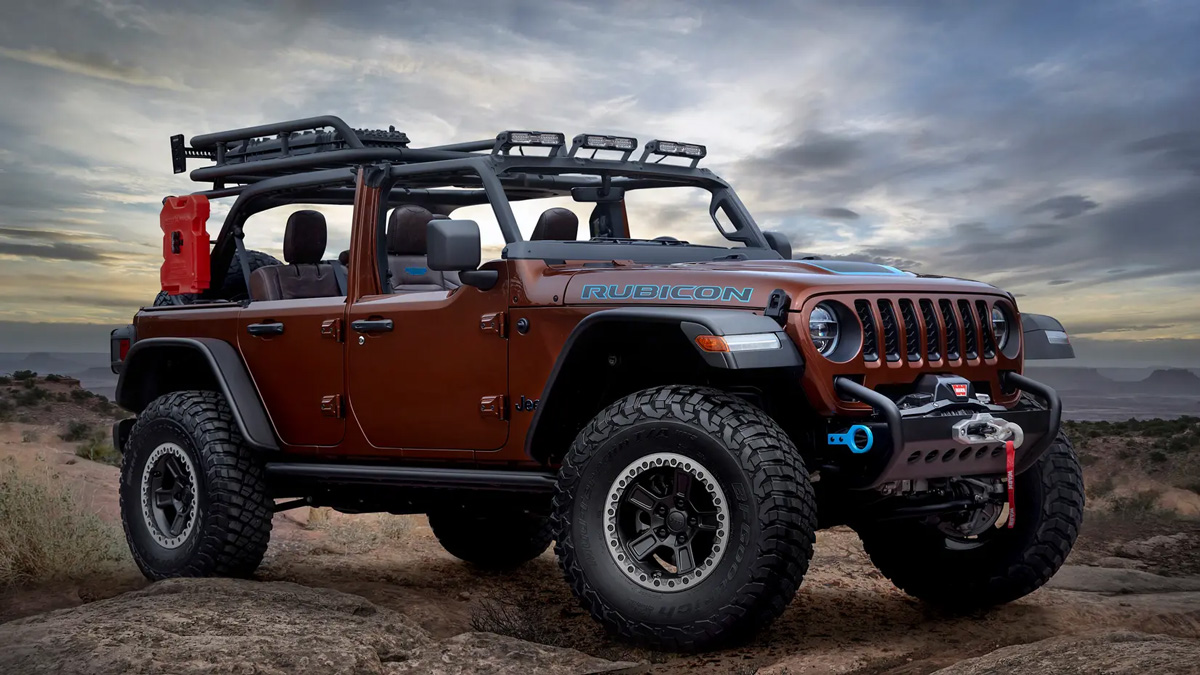 Last but not least for 2022 is the Birdcage Concept. So-called because of the scaffolding that runs front to back, there’s no windscreen but plenty of additional off-roady bits. 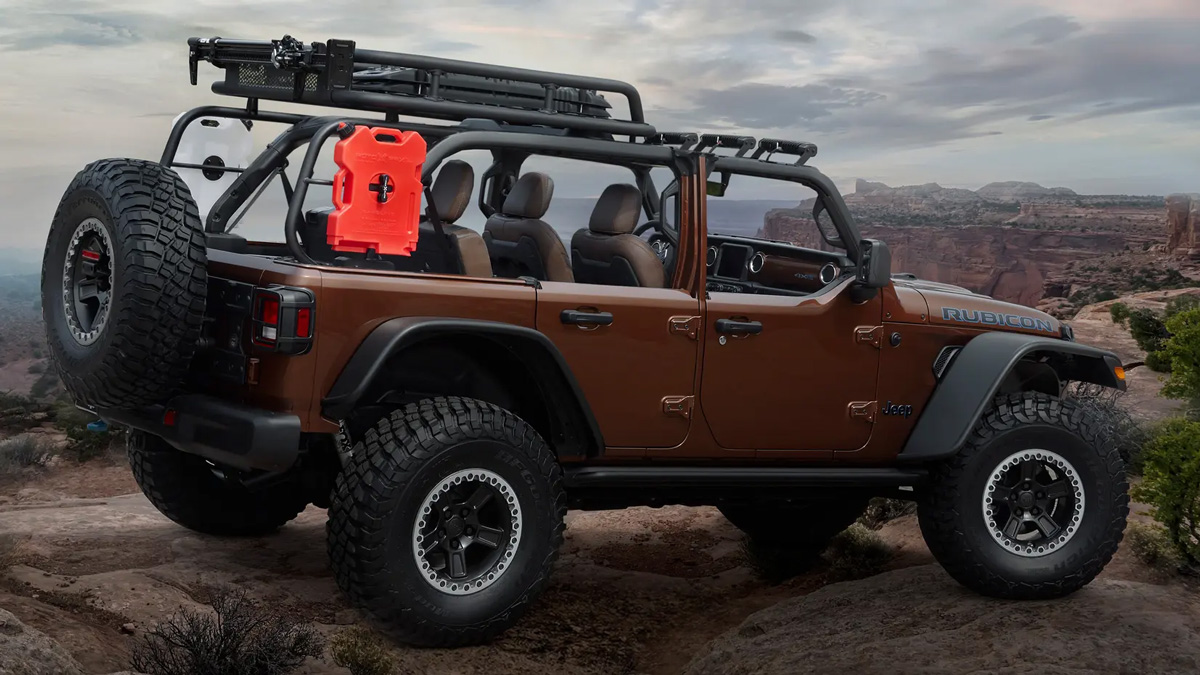 Jeep says that quite a few of the parts on the Birdcage are currently concepts that it’s looking to put into production. Take the front arches with integrated daytime running lights, the aluminum taillight guards, and the triple lightbar that’s mounted up top. In case you hadn’t realized, we love lightbars… 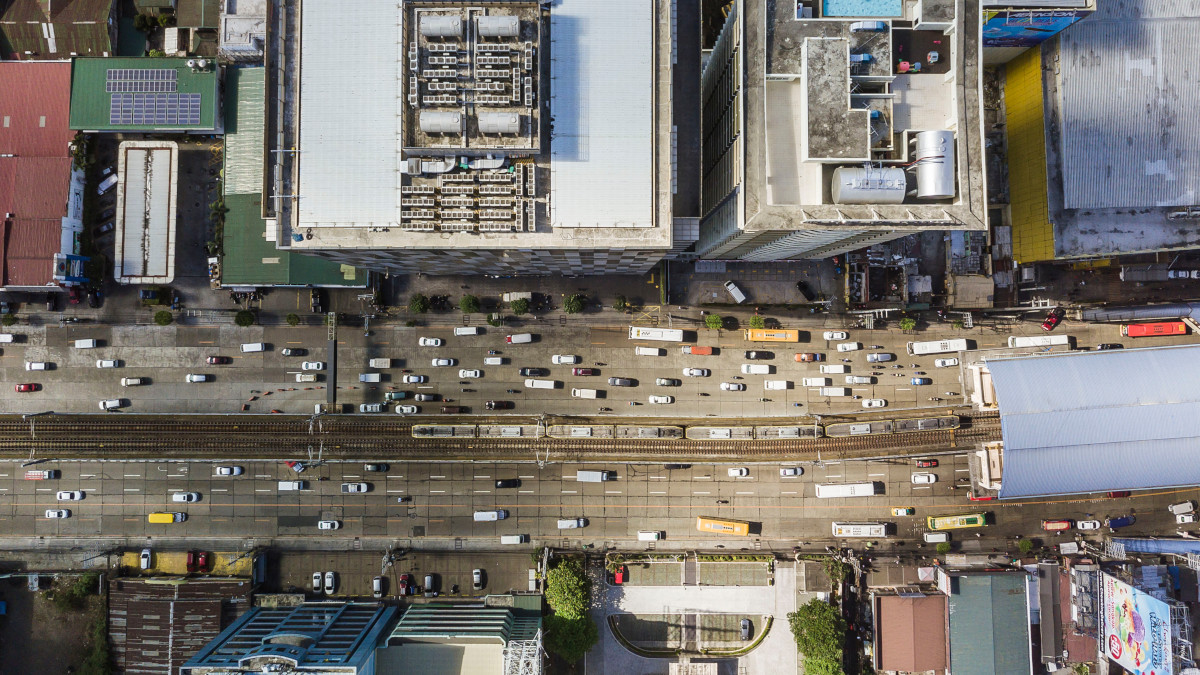 Holy Week update: Number coding suspended from April 12 to 15
View other articles about:
Read the Story →
This article originally appeared on Topgear.com. Minor edits have been made by the TopGear.com.ph editors.
Share:
Retake this Poll
Quiz Results
Share:
Take this Quiz Again
TGP Rating:
/20