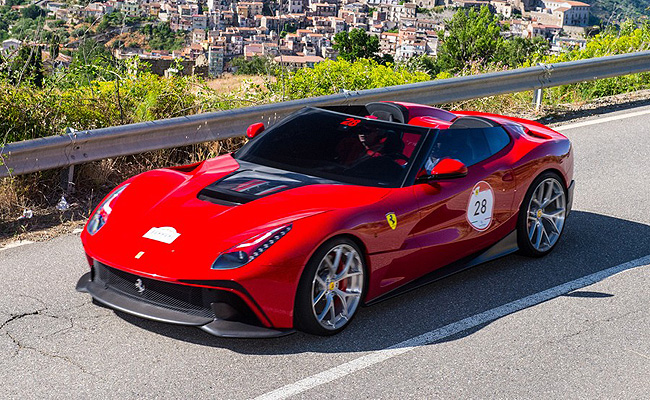 Ferrari has revealed its latest one-off model: the F12 TRS, which took part in the Ferrari Cavalcade, the Italian carmaker's annual driving tour around its home country exclusive for its clients.

With a design that was supposedly inspired by the 1957 250 Testa Rossa, the F12 TRS is based on the F12 Berlinetta and was developed "at a client's request as an extreme, two-seater, open-top sports barchetta."

The F12 TRS sports a different front end than the donor car, led by a hood that has a window to display the red cylinder heads of the V12 engine. A long, dark band of glass acts as the windscreen and serves as a contrast to the car's body.

For its rear, long fuselage fairings run behind the headrests and into the rear spoiler. A smooth ramp runs from the central tunnel linking the interior to the exterior, creating a longitudinal aerodynamic channel to deliver a venturi effect completed by a vent under the spoiler.

For the interior, some of the controls (like for the air-conditioning system) have been minimized, while the glove compartment, central air vents, mats, audio system, and window controls have all been removed. Also, most of the materials used are black-matte carbon fiber, leather and Alcantara. Finally, the same specially developed red paint for the exterior adorns the central tunnel and the door panels as well.

Powered by the same V12 engine as the F12 Berlinetta's, the F12 TRS has the same performance figures, including a 0-to-100kph acceleration time of 3.1 seconds with 200kph achieved in 8.1 seconds.