The American carmaker will be showcasing over 50 modded vehicles under its belt
by Greg Potts | Oct 28, 2019
CAR BRANDS IN THIS ARTICLE 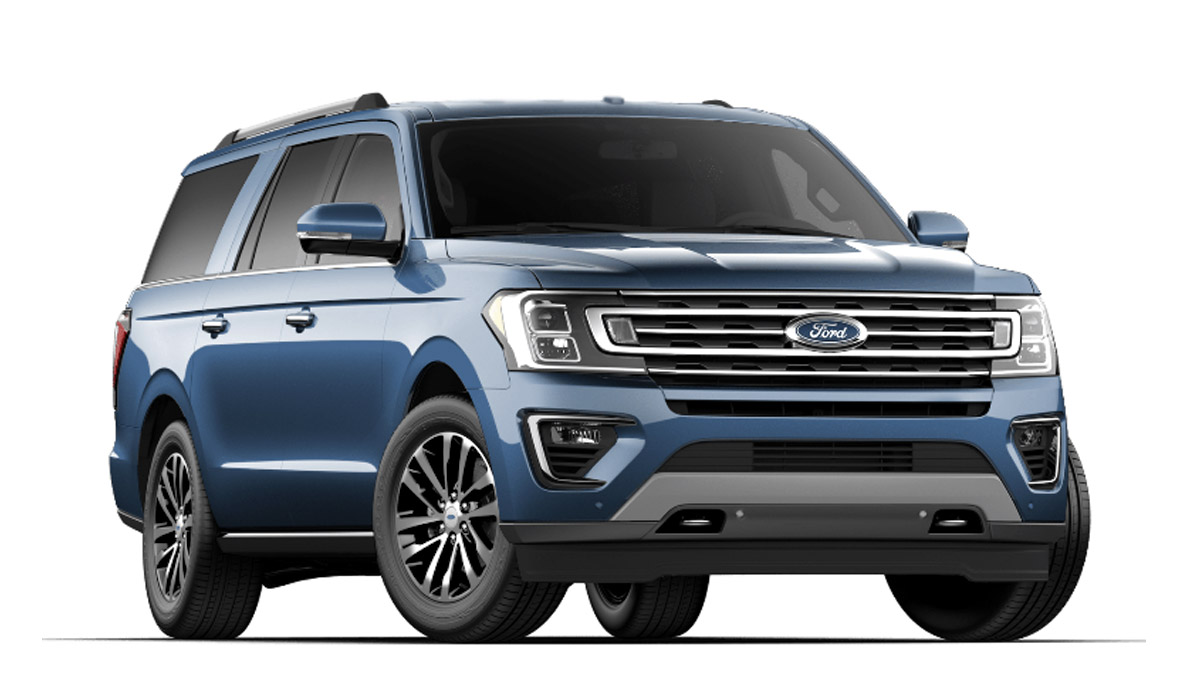 Eight of those vehicles will be the SUVs featured in this here gallery. Ford says that these versions of the Escape, the Explorer and the Expedition are “tricked-out builds highlighting the latest trends in customization.”

Scroll down for a preview of the carmaker’s SEMA SUV offerings.

First up is the modified Escape (main image). Ford says that this gold-wheeled creation is for outdoor enthusiasts who want to go surfing or skiing. Quite why it needs Eibach performance lowering springs and a custom Borla cat-back exhaust, we don’t know, but at least it’s different. There’s also a roof rack on top and a custom leather interior on the inside. 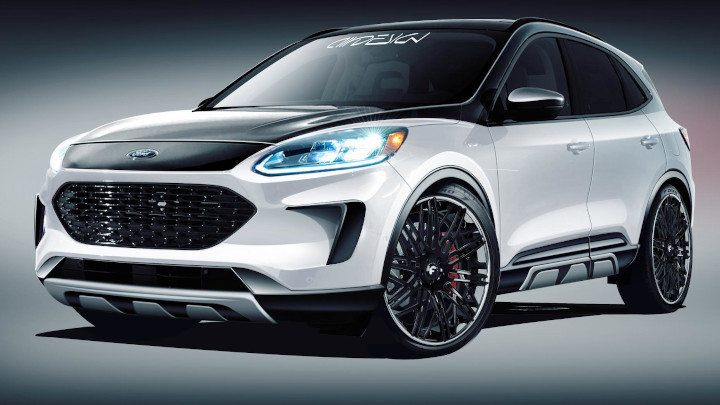 Another Escape, although this one’s apparently a hybrid underneath. Nobody will be wondering what’s under the hood when staring at that bodykit, though. It really does demand attention.

Apparently, the inside is all about utility and features a cargo organizer, a cargo mat, and floor liners, as well as a portable fridge. We’re struggling to identify the target market here... 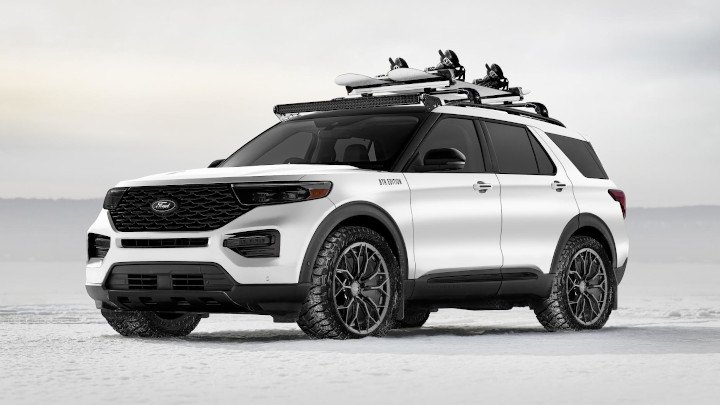 Now, this looks more like it. There’s even a light bar—we love light bars. Illinois-based tuner Blood Type Racing has also given the Explorer a suspension leveling kit, some chunky off-road tires, and a Ford Performance skid plate.

There are also black wheels, black chrome accents, and a Borla exhaust with black chrome tips. Most important, though, light bar. 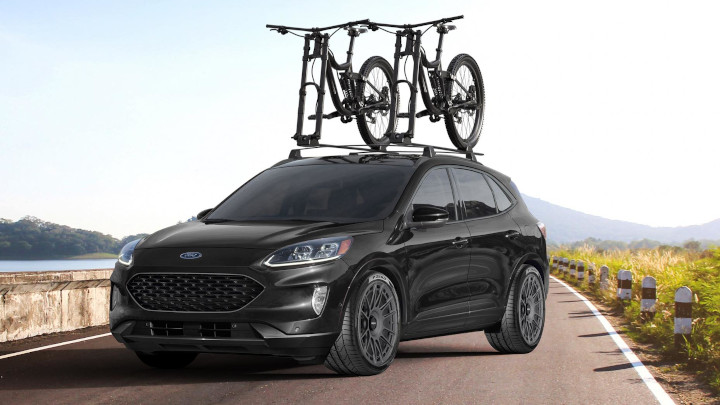 Back to the Escape, with this one from MAD Industries. Unfortunately, the only thing mad about this version is the 21-inch Rotiform wheels, which should ensure the ride is bone-shakingly hard.

Elsewhere, there’s another appearance for the Eibach lowering springs, and a Yakima bike rack shows everyone how much you value ‘lifestyle.’ 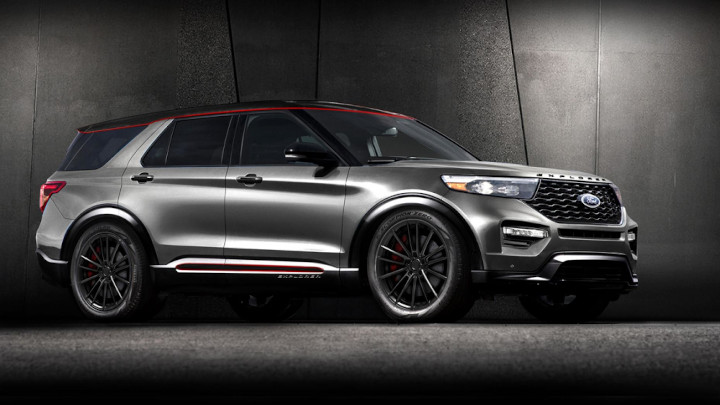 If you thought the 21-inch wheels on that Escape were big, check out the massive 24-inchers on this Explorer. CGS Performance Products has also gone for a grey/black color scheme with red accents, as well as a custom exhaust and leather interior. 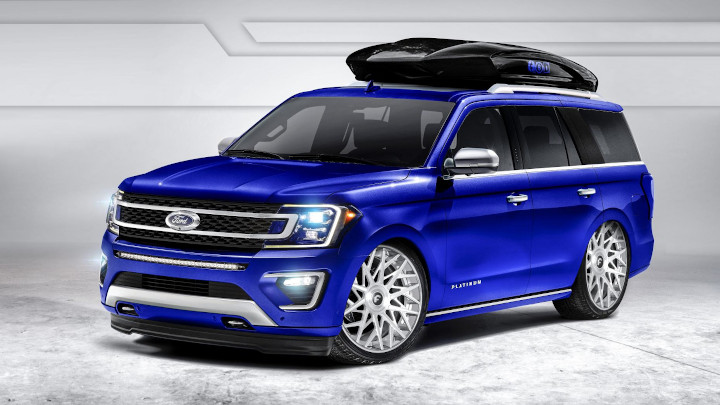 According to a popular Internet search engine, Good Boy Daisy is a US-based girl band. We’re not sure how much say they had in the customization of this Expedition, but it’s been given a Whipple induction kit and, you guessed it, a Borla exhaust. There’s also a custom paint job and more 24-inch wheels, as well as a napa leather interior, Sennheiser mics, and a QSC TouchMix 8 digital mixer. 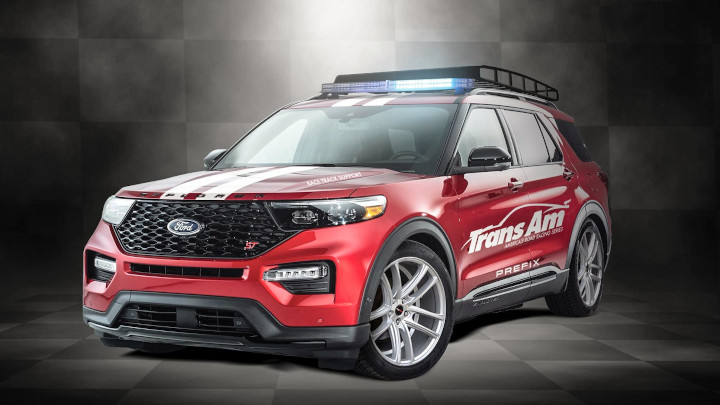 This Ford Explorer by Prefix has been designed to be the ultimate racetrack support vehicle. After SEMA, it’ll apparently go into service as a pace vehicle for the 2020 Trans Am race season. To help with that, there’s lowered suspension, a Whelen emergency siren system, and first-aid and roadside assistance kits on board. Plus, Recaro race seats ensure that the driver can fang the SUV around a circuit without falling into their passenger’s lap. 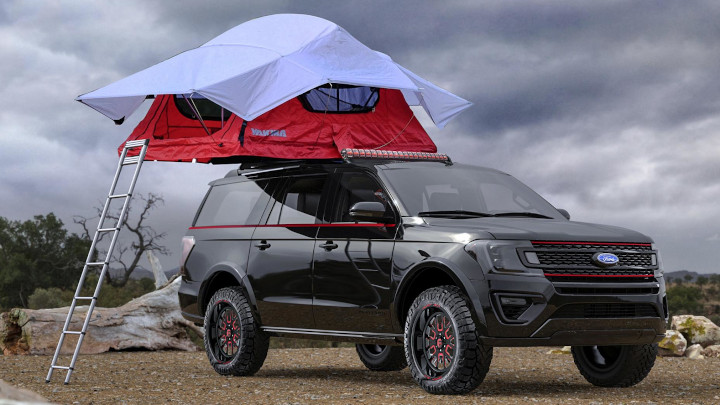 And so we come to number eight. This Expedition is another example of MAD Industries’ work, and it’s perhaps the most extreme of the bunch. Most noticeable is the Icon Dynamics Stage 2 coilover suspension, which looks considerably taller than the standard setup. There’s also 22-inch monoblock wheels and Nitto Ridge Grappler tires, while under the skin customers would get a Whipple EcoBoost air induction system and high-performance brakes. Oh, and don’t forget the giant roof tent sat on top there—the length of that ladder gives you some idea of how tall this thing is.

We’ll see all of Ford’s fettled SUVs and crossovers in the flesh at SEMA. For now, though, is there anything you’re most looking forward to? 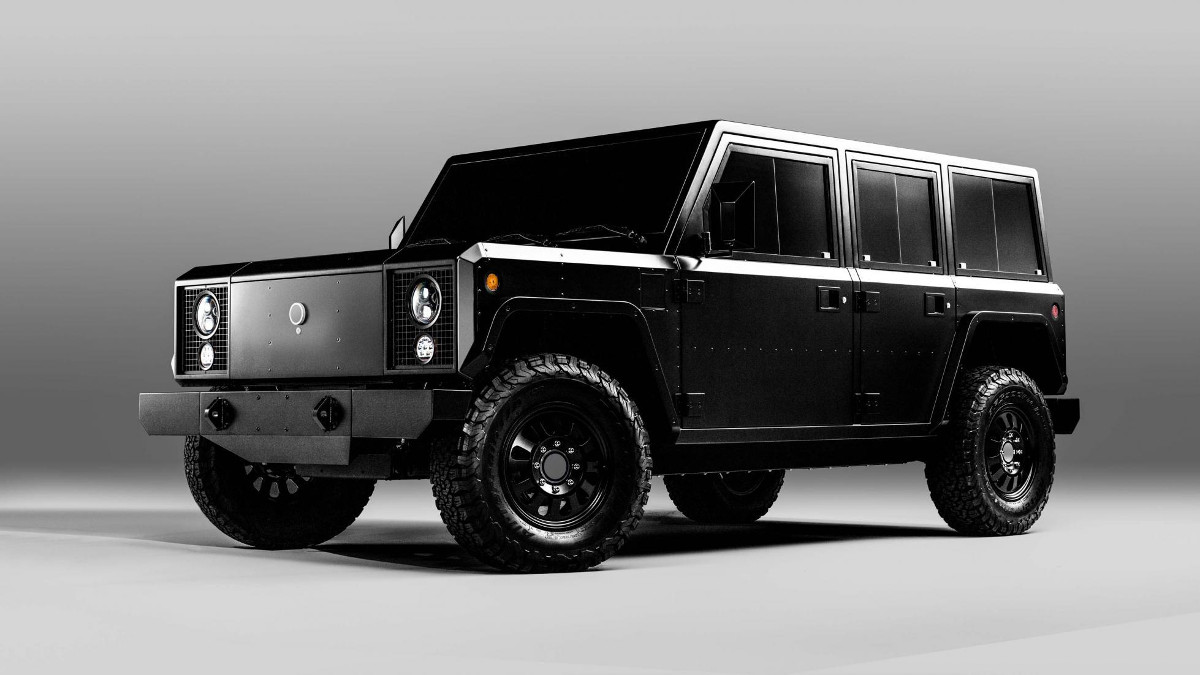 Bollinger doesn’t want chump change for its electric 4x4s
View other articles about:
Read the Story →
This article originally appeared on Topgear.com. Minor edits have been made by the TopGear.com.ph editors.
Share:
Retake this Poll
Quiz Results
Share:
Take this Quiz Again
TGP Rating:
/20