The Mercedes-AMG 'Project One' hypercar will land in September

The company says it will be 'easy to drive'
by Jason Barlow | Jan 19, 2017
CAR MODELS IN THIS ARTICLE 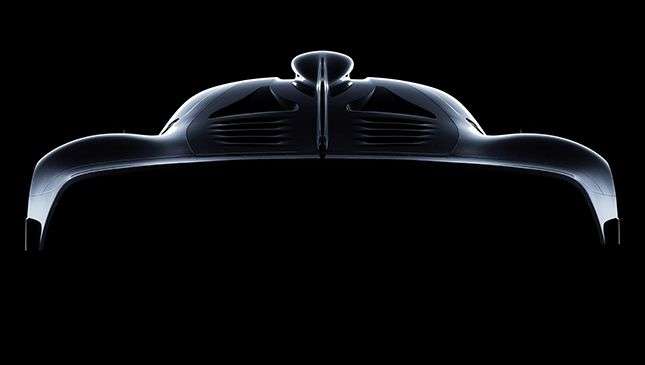 AMG’s 50th birthday celebrations will culminate in the reveal of the 1,000hp-plus Project One hypercar at the Frankfurt Motor Show in September. Daimler CEO Dr. Zetsche told TopGear.com: "The hypercar will be the missing link legitimizing the integration of AMG with the Formula 1 team. It will be limited production, and ideally we want it to be sold out before the first one is delivered. It’s the first street legal car with a Formula 1 engine, and will be perceived as the ultimate sports car. We have relatively strong indications that this could be an achievable target."

Project One will use the same hybrid powertrain as the current, all-conquering Mercedes F1 car, with some necessary alterations. Following a teaser glimpse during CES, Mercedes has also released the first official image of the car, which clearly shows a roof-mounted central air intake, large vents and cooling slats on the rear, and an ultra-wide rear track. It will also feature a central fin, which promises unprecedented aerodynamic downforce on a road car.

Fascinatingly, the new AMG elevates high-end, high-performance cars to a level above even the likes of the McLaren P1, LaFerrari, Porsche 918, and Bugatti Chiron. As well as vying for supremacy on the world’s racetracks, Mercedes and Red Bull are now also locked in a battle to deliver the most authentic F1-influenced road car, with Project One going head-to-head with the Adrian Newey- and Aston Martin-designed AM-RB001 that was announced last summer.

There are major differences, though, as AMG boss Tobias Moers told TG.com when we caught up with him during the Detroit show for an exclusive progress update. The Aston-Red Bull car is stunning, I noted, but I can’t see how they can achieve the aero they’re chasing while packaging a normally aspirated V12 in that body. "Me neither," Moers says with a sly smile. So when and why was the decision made to embark on Project One?

"Five years ago the brand was not capable of doing (a hypercar). Now we are," Moers says (AMG sold 99,235 cars in 2016, and has tripled its volume in three years). "It was very clear to us that it could not be a V8 or V12 hybrid car. It should be something really special. Who else, other than us, could try to bring a Formula 1 engine to the street? I called Andy (Cowell, MD of Mercedes High Performance Powertrains) and said, ‘have a think about it. Can you do it?’ He said, ‘give me two months’. He came back and said, ‘yep, we can do it.’

"The feasibility study started at the end of October 2015, and that lasted until the end of February last year. Then we had a clear understanding of how we could achieve it. Where are we up to? The exterior design is frozen. We’re currently finalizing the interior. We fired up the first engine last year."

Moers insists that the project offers significant pointers for AMG’s direction of travel. "It’s not just about doing another ‘me too’ hypercar with a V8 or V12. That’s not what I see for us as a brand. Of course, so many of our customers have asked if we’re going to do a hypercar, and yes, it’s a birthday present, and you’ll see it on the stage in Frankfurt. But it will also give you an indication of how we see the future of high performance.

"To me, there is no sense in having a V8 or V12, it should be something more sophisticated regarding efficiency and driveability. That’s why we’re going to use the 1.6-liter V6, with the split turbine, with the electric motor on the crank, and the all-wheel drive application. Everything we learnt from the SLS e-drive will also feature on this car… when you talk about torque vectoring and four motors on each wheel, we learned a lot from that car, about how to tune the systems for the ultimate driving dynamics. Now we’re going to apply all of that to Project One."

Moers remains tight-lipped on the car’s overall design, but admits, a little mischievously, that "we need space for cooling, for radiators. Maybe some of the others don’t, but we do…" He also confirms that Project One has a bespoke gearbox, and that the battery is a different size to the one used in the F1 car. Although F1 cars are effectively prototypes that are prepared anew for every Grand Prix, Moers points to the restrictive nature of F1’s current engine rules, and says that reliability and durability aren’t the biggest challenges.

"We’ve entered a closed loop with Andy on the load spec we’re applying to the car. We’ve taken what we’ve learned on the Black Series cars and the GT R and applied that to the F1 endurance simulation. On a street car the demands are different for sure, so yes, it’s something to think about, but it’s not the biggest task. Making the engine street legal is tougher—turning the revs down to idle speed, for example. The F1 engine idles at 4,000rpm, it’ll be 1,200 or so on this car."

He also insists that, despite its phenomenal performance potential, Project One will be “easy to drive. Although learning to trust the aerodynamics and getting used to the available downforce is the main challenge." AMG reckons it’ll do 24km on electric power alone, too.

Moers also says that while AMG isn’t abandoning its signature extrovert big capacity engines, Project One paves the way for a new philosophy. "I know that downsizing is not stopping. I know that electrified powertrains are the future. We have to take care of that. But I also know that sound is a very important component for our customers."

"That’s a good question, but if you have a certain power output, and you have a driving mode that gives you electric power all the way along…an electric set-up gives you the opportunity to have more power and more performance. And extra efficiency. What’s wrong with that? Perhaps not in an E-Class, but maybe in a C-Class or A-Class.

"It’s the same with autonomous functionality. I don’t want to waste time sitting in traffic jams. So in an E-Class or C-Class, why not? Okay, it’s not appropriate in a GT R or the hypercar, but in the other cars, for sure. As long as you can turn it off…” 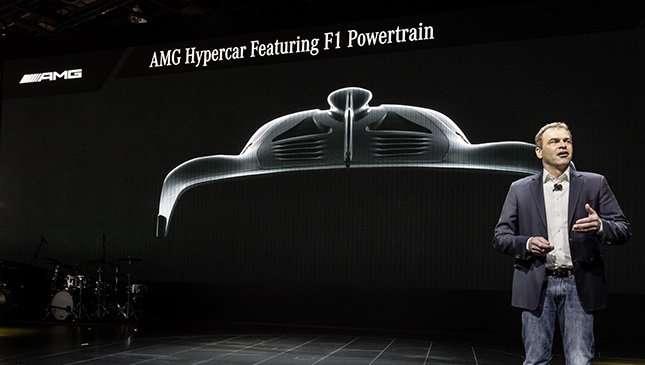 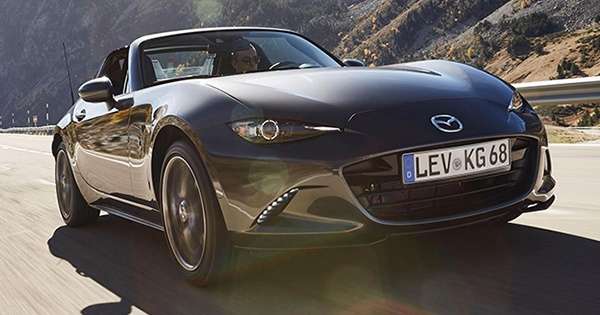 First drive of the Mazda MX-5 RF
View other articles about:
Recommended Videos
Read the Story →
This article originally appeared on Topgear.com. Minor edits have been made by the TopGear.com.ph editors.
Share:
Retake this Poll
Quiz Results
Share:
Take this Quiz Again
TGP Rating:
/20