Feast your eyes on Mercedes’ 1,000km-range EV, the Vision EQXX

A highly efficient electric car with a stylish look to boot
by Paul Horrell | Jan 4, 2022
CAR BRANDS IN THIS ARTICLE

You can imagine something not altogether different from an actual production car, which is Mercedes’ intention. Calling it a concept is colossally underselling it. It’s not just a styling exercise. It’s packed to the gills with radical new engineering, but all of it with an eye to genuine feasibility.

The aim here is to get a nice round 1,000km (625 miles) of range. Now the obvious answer to that would be a mahooosive battery. With today’s tech, that’d mean a vast underfloor box, which could only fit under an SUV. The weight and drag would spiral upward, and so would the price. Efficiency would plummet. 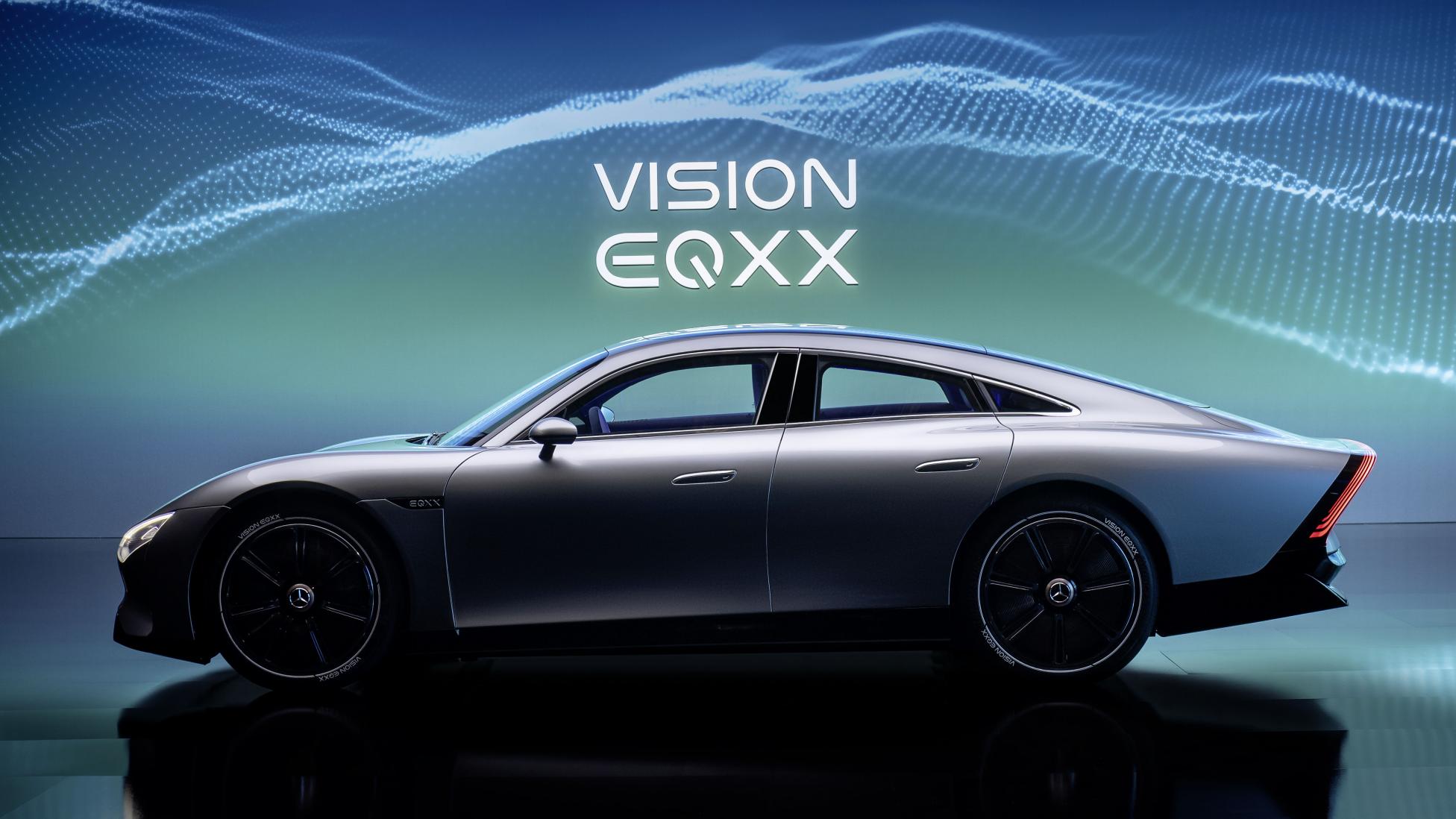 The EQXX’s approach is the opposite: low weight, low drag, sky-high efficiency. More range from a smallish battery. Every part and system has been given the beady eye, looking for savings in weight, aerodynamic drag, friction, heat, and electrical resistance. Right down to the very soldering between electronic components. Honestly.

So the EQXX should do about 9.5km per kWh. Which isn’t far off double the efficiency of your normal EV this size and performance.

It weighs about 1,750kg. That’s less than a VW ID.3 with the 428km battery option. The rear-drive motor gives 204hp. Mercedes is giving no performance figures yet, but that power and weight in the RWD EQXX will mean a warm-hatch step-off. And with low drag, the high-speed acceleration won’t be blunted like it often is in EVs.

Project head Klaus Millerferli tells me the efficiency won’t remain just a claim or simulation, although a stupendous amount of computer simulation has gone into the EQXX’s engineering. Early next year, he’ll be doing a long-distance demo drive to prove it. This is a real working car. 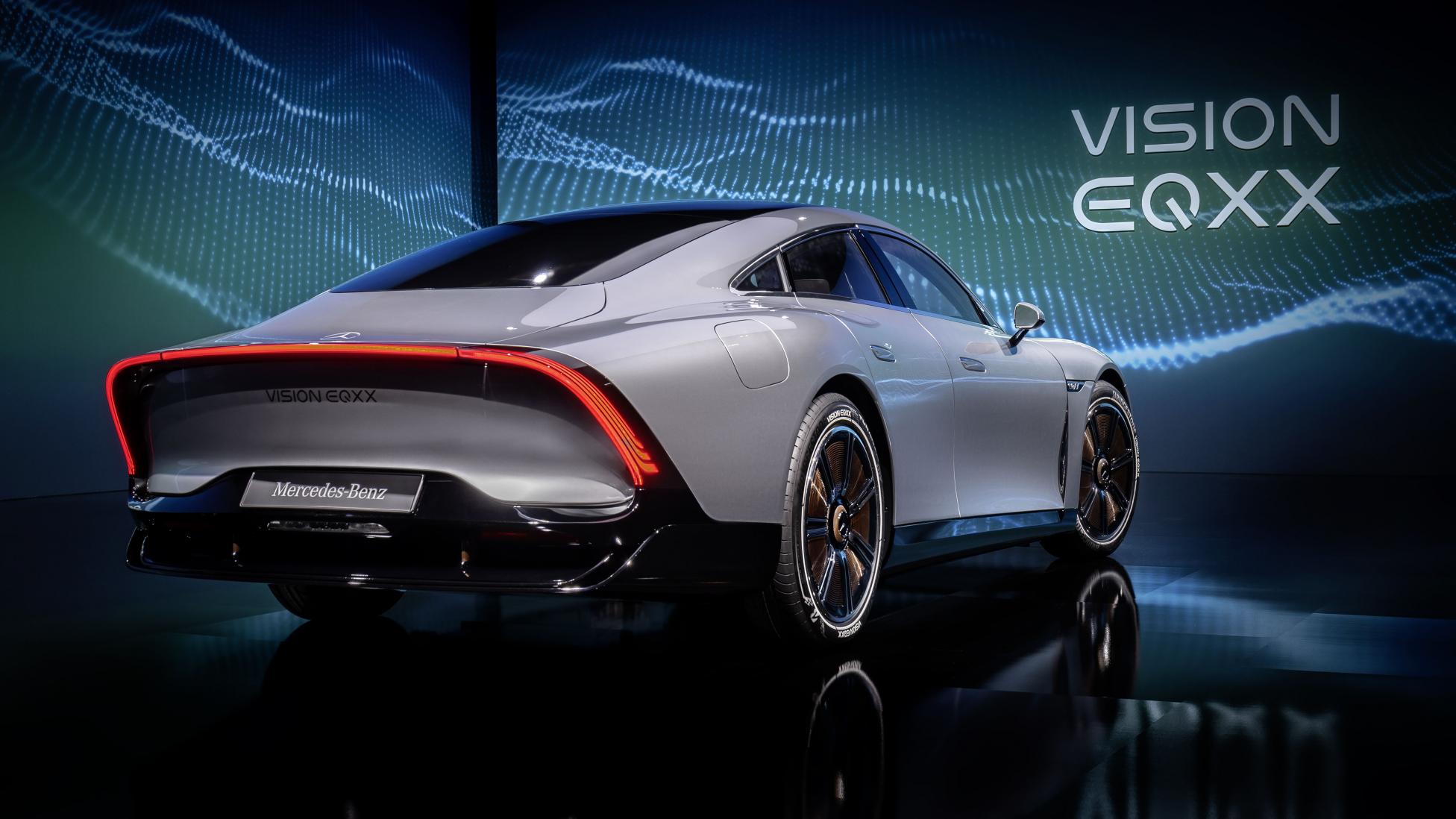 Pretty, eh? Okay, maybe that long tail might be (literally) a bit of a stretch, but the rest of it is designed to be pleasing as well as low in drag. Matthias Schenker of the advanced design department says he didn’t want to get too much of an obvious teardrop shape—the VW XL1 and GM EV1 come up in conversation. And they were only two-seaters, by the way.

But the cabin does taper rearward, while the body sides stay wider, giving the EQXX a shouldered look over the rear wheels. All designers always want that. Neither did Schenker like faired-in wheels, so he settled for 20s with semi-transparent flat hubcaps.

A simple rear-light graphic around the periphery of the tail emphasizes its slippery shape. But the real drag-cutter is a diffuser that drops and extends back at speed. Again, it embodies production-car feasibility: it can retract as quick as a lizard’s tongue if the car senses a rear-end crash is imminent. 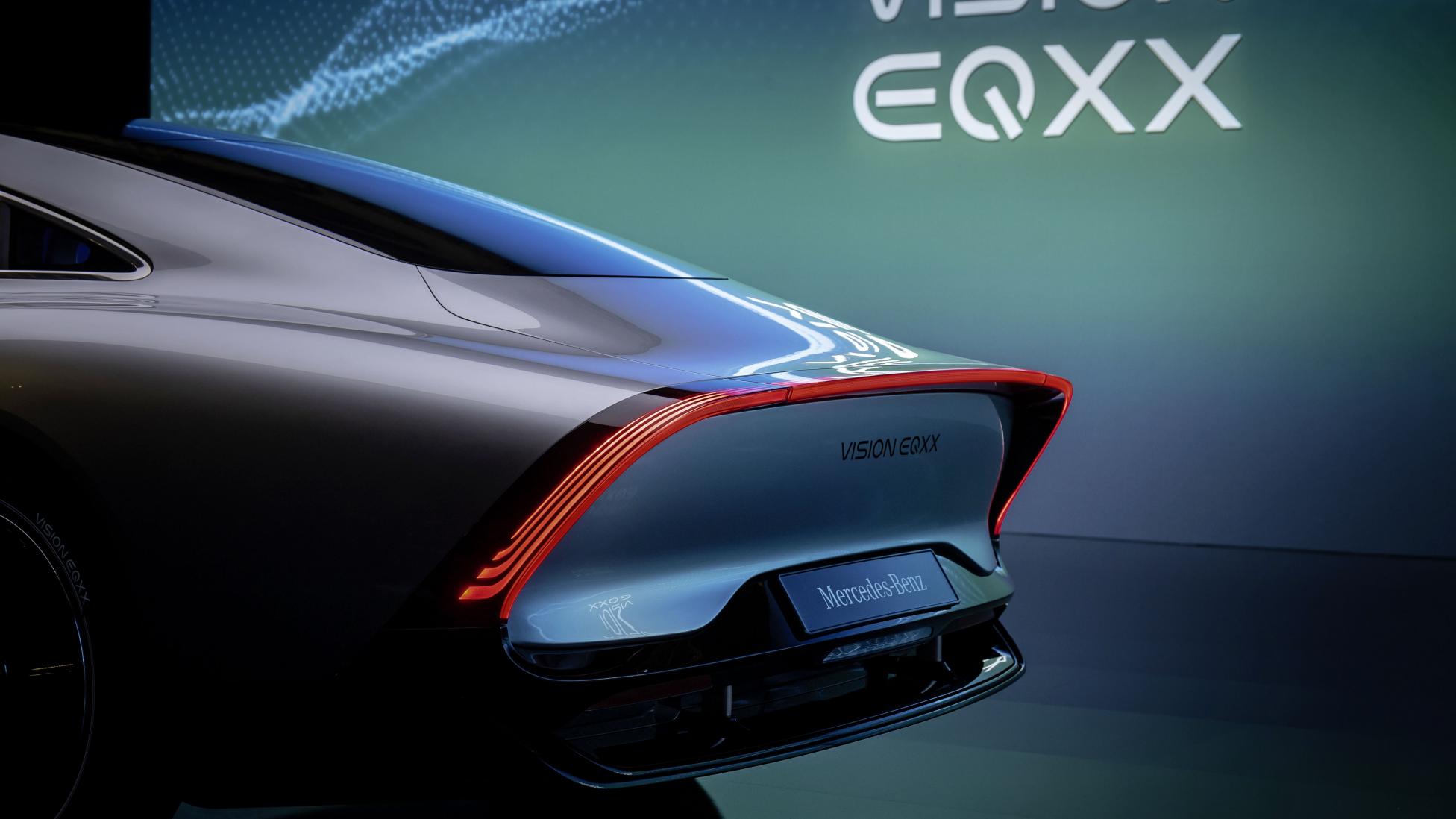 So there’s a drag coefficient of 0.18, which is amazing enough, but combined with the tiny frontal area means that overall drag, the CdA, is ultra-low.

Mercedes aero chief Teddy Woll says that at motorway speed, most EVs use almost two-thirds of the battery energy just in overcoming aero drag. Do the sums and it’s clear the EQXX’s low CdA could be worth well over 160km of range.

I mention I’m glad to see real mirrors, not lipstick cams which are horrible to use. Woll agrees, and says these actual mirrors cost only 0.0015 Cd points.

It has a battery of ‘less than’ 100kWh capacity, about the same as the new EQS. But the EQXX is much smaller—its wheelbase is similar to an A-Class. So the battery has to be smaller. It’s also about 40% lighter than the EQS battery. They did that using chemistry and design principles from the Formula 1 and Formula E teams, based at Brixworth.

The anodes are a high-silicon type. But it isn’t a solid-state electrolyte, because this is supposed to be production-realistic. 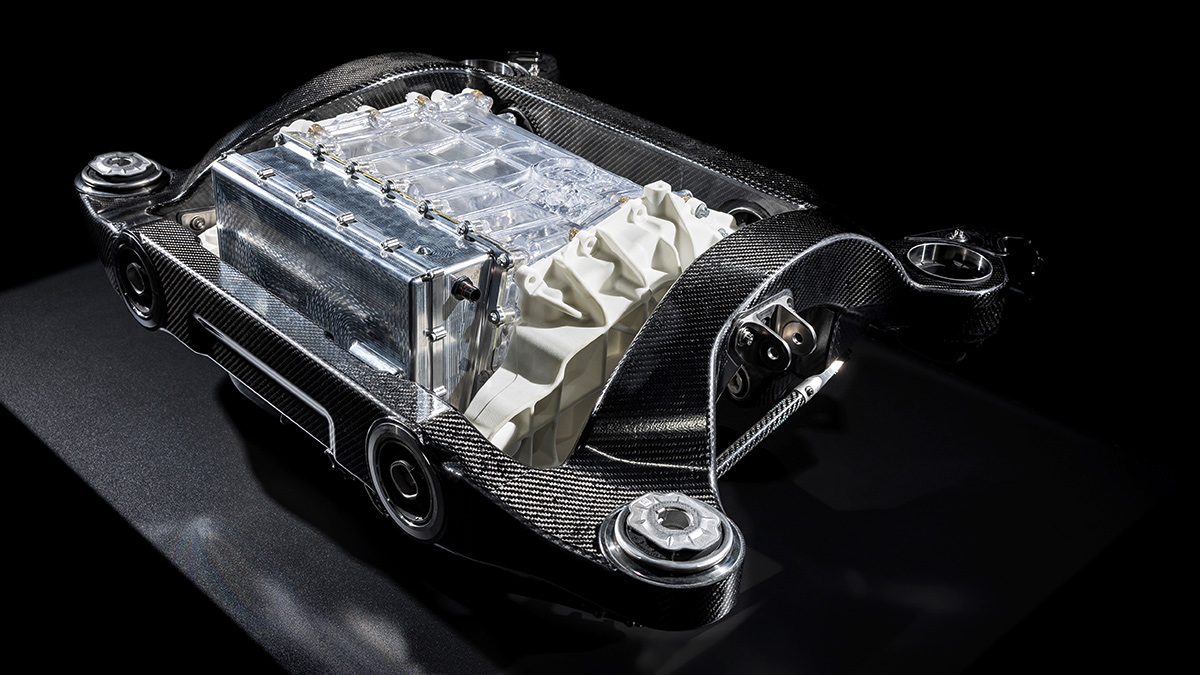 Here’s the first big bit of lateral thinking. Everyone else makes a big deal of battery cooling, because that way you can charge ultra-fast. So they have water channels around the battery, and big radiators. The EQXX doesn’t. The battery is air-cooled. Which sounds primitive (a Leaf is one of the few EVs left with an air-cooled battery).

But of course, if you’ve a battery that can drive all day, you don’t need super-rapid charging. Not that the EQXX is exactly sluggish. It runs at 900V, so it can sustain 100kW without excess heat. Taking out the water channels and associated radiator cuts weight and drag.

The motor itself is a permanent-magnet type. Those are notoriously hard to design, as tiny changes to the shape and position of the magnets makes big differences to output and efficiency. So they did simulation tests on several hundred thousand designs.

The basic unit is similar to something they have planned for production cars in four years’ time, but all the internal components and materials are super-optimized. They’re carefully paired with an inverter designed by the Mercedes racing people, using new-generation silicon-carbide MOSFETs. 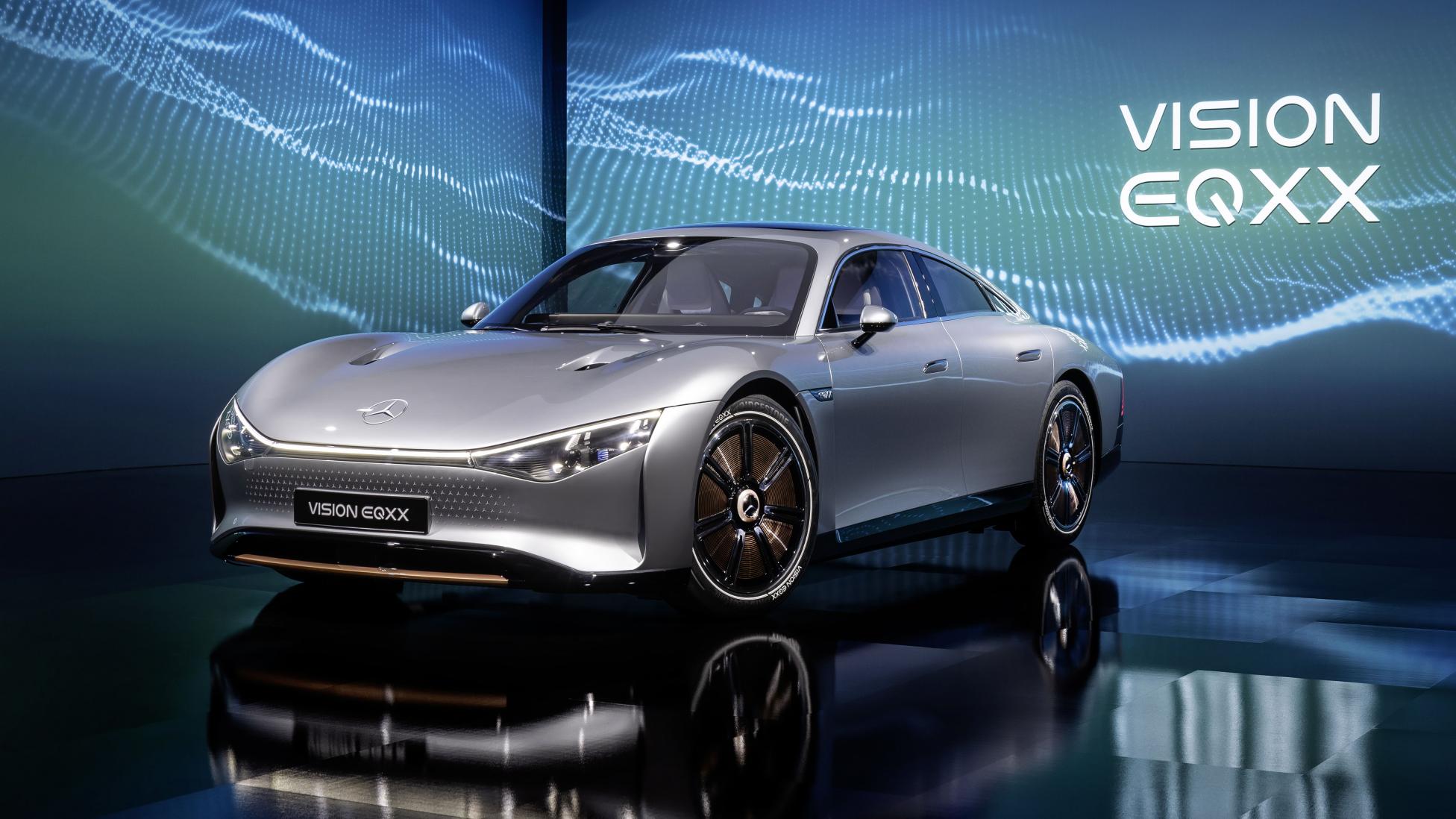 As the Mercedes-AMG racing bods at Brixworth did the power stuff, Mercedes’ F1 team at Brackley helped with the EQXX’s structural design. They also used video-game engines, which can draw complex 3D shapes with the fewest number of polygons.

One result is a vast rear subframe, designed by bioengineering principles, its dendritic limbs featherlight and ethereally beautiful. Yet it meets the usual road-car rules for durability and crash stiffness. And it weighs 20% less than a normal subframe.

They needed it to meet noise and dirt-ingress standards, too, so they filled the voids between its structural legs with a material from a company called UBQ made, in part, from used nappies. If you’ve ever raised a kid with disposable nappies, you know that finding a way to keep those out of landfills will be splendid ecological gain for the world they’ll grow up into.

The body also uses high-strength steel made by low-CO2 processes. The doors are advanced composite, the brake discs cast aluminum, even the springs are composite. It’s all light, light, light. 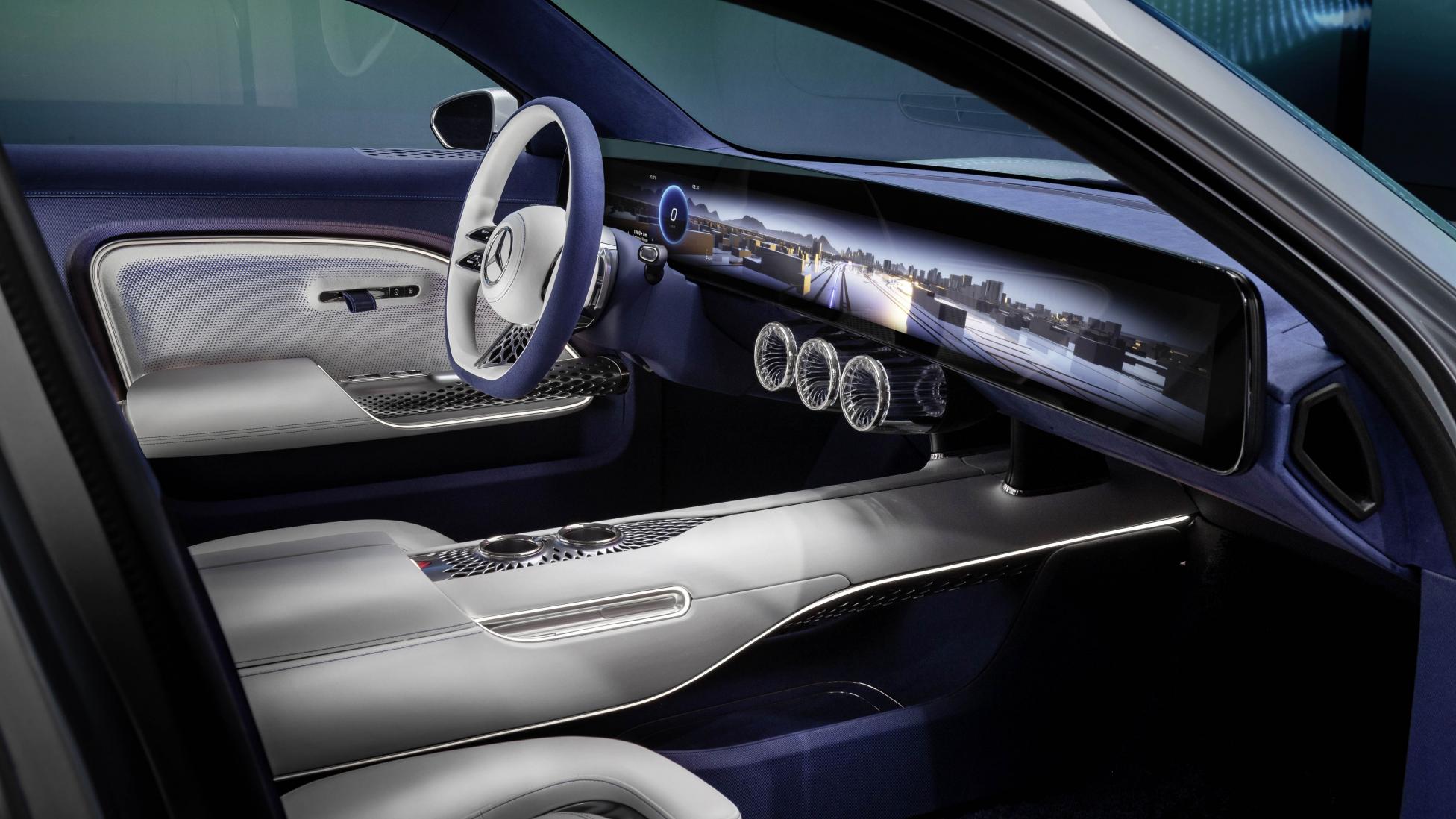 Inside, the EQXX has ultra-low consumption screens. New brain-mimicking computation techniques cut power for the navigation and, potentially, driver-assist too. The stereo doesn’t waste energy by booming through the whole cabin, but uses little speakers in the head restraints. That has the extra benefit that the driver gets auditory feedback on how their driving style is affecting efficiency, but the passengers just get the music.

All the cabin fabrics are low-impact. Substitute leather uses fibers from cactus leaves, and there’s silk that’s nature-identical but manmade and eco-friendly.

But what does it all mean, and when? Everything in the EQXX—motor, electronics, battery, body structures, materials—is feasible. And there’s an all-new electric platform from Mercedes, codenamed MB.EA, coming in 2024. Much of these technologies will turn up then. Should be good. 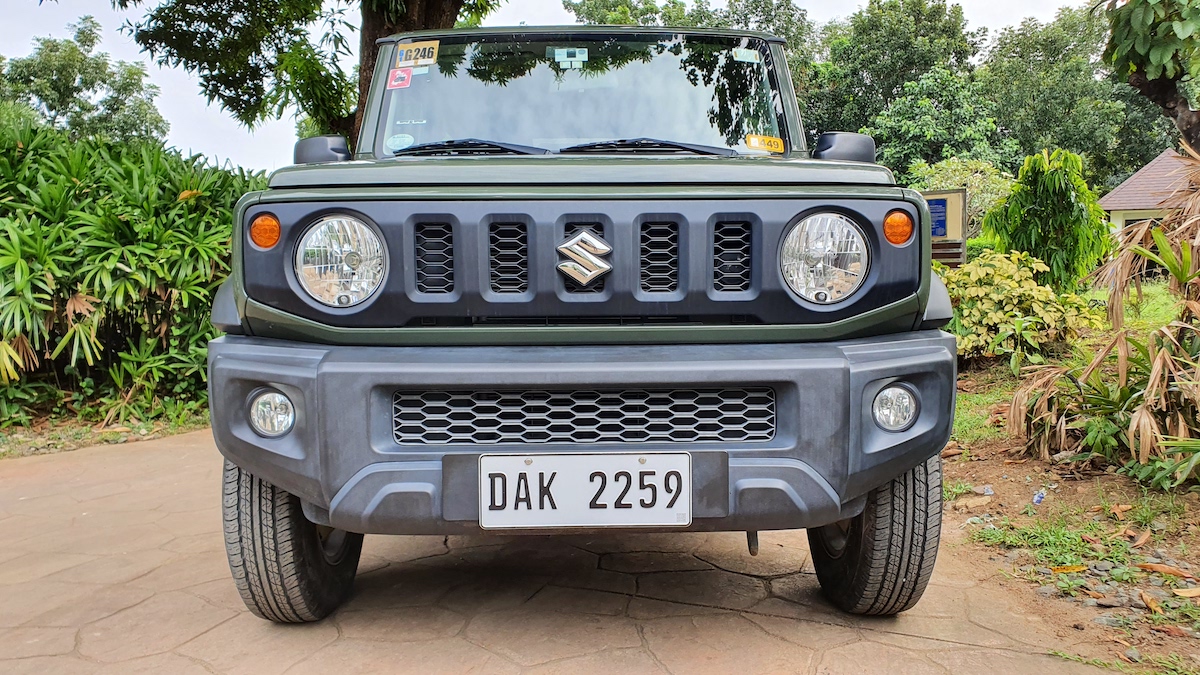 Reminder: Number-coding scheme remains in effect under Alert Level 3
View other articles about:
Recommended Videos
Read the Story →
This article originally appeared on Topgear.com. Minor edits have been made by the TopGear.com.ph editors.
Share:
Retake this Poll
Quiz Results
Share:
Take this Quiz Again
TGP Rating:
/20